Race Report: After finishing 2nd by a wheel just two stages ago, Garmin’s Ryder Hesjedal climbed right back into it on today’s gruelling mountain run to bag Canada’s first ever stage at La Vuelta, and the biggest win of his career.

Today was the first of three consecutive mountain stages facing the peloton in the 2009 Vuelta, featuring the vaunted Velefique – twice! Garmin’s Ryder Hesjedal took the glorious win, against the odds, out of the break. Read on! 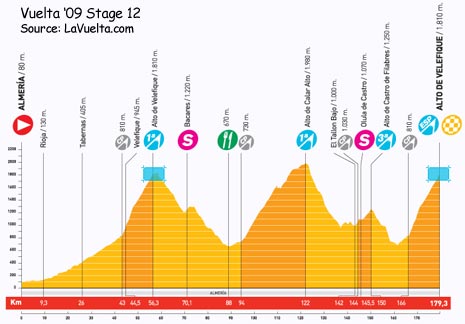 Today’s course had an odd feature, as the group actually climbed the Velefique two times, coming in as the first & last climb of the 179km circuit from Almeria to Velefique in the Andalucia region of Spain. Today was the first of 4 rough, hilly days ahead, and the fireworks were sure to come. Three Cat 1 climbs and one cat 3 climb were about to bludgeon the lads. 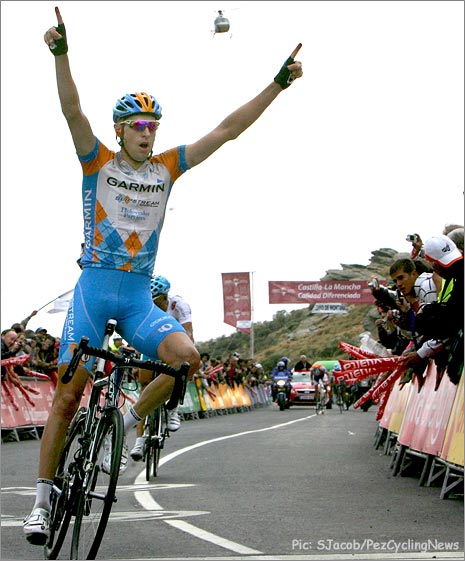 On the Cat 3 De Castro de Filabre, the last climb of the day before the final re-ascent (is that even a word?) of the Velefique, the breakaway began to show the signs of the effort as they squabbled over the KOM points to be had.

In the peloton, predictably, the Caisse d’Espargne team of overall race leader Alejandro Valverde set all of the tempo as they kept the leaders at about 6 minutes before beginning to chip away a little harder with under 30km to go. Leading up to the last time up the Velefique, David Garcia (Xacobeo) left his mates and went on ahead alone.

At the very foot of the climb with 12km to go, the riders in the break began attacking to establish their own space and rhythm behind Garcia, as their lead had been sliced down to 4:25. Ramirez and Hesjedal were the pair to start working together behind the Xacobeo rider. In the main peloton, a lot of the workers who had been setting tempo were punching out for the day and heading to the back. Clearly all the workers were setting up their leaders for the fight spoiling on the Velefique. 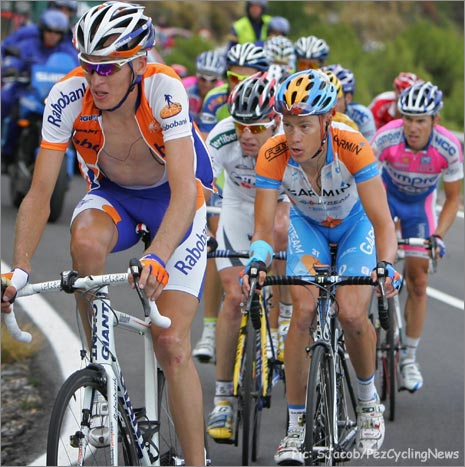 Robert Gesink started shooting at anything that moved on the final climb, and bagged himself a handful of seconds to focus his bead on the golden fleece. Danielson hung in there and onto his 4th overall.

The fireworks began when Mosquerra took off, followed immediately by Danielson and Gesink. The Caisse boys rode tempo and everything came back together. The group began looking at each other immediately, sensing the counterattack. Valverde for a moment seemed in a spot of bother, easing back to 6th or 7th wheel in the group. Evans noticed, as did Danielson. Was there blood in the water?

Some more notable victims met their demise by way of withdrawing from the race, said riders being the Astana duo of Rubiera and Vinokourov. Maybe the effort was a little much for Vino after a 2 year doping suspension.

Just under 7 k to go and David Garcia kept his lead over everyone else, ticking out a clean cadence. But gaining on the Spaniard was none other than the continually impressive Ryder Hesjedal, just 10 seconds back. They were far enough away to have the stage in hand it seemed. The Canadian made the junction and the leaders numbered two. 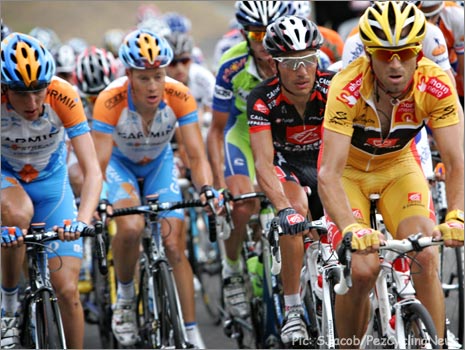 Alejandro kept his cool, and his challengers under wraps for another day.

Behind, Cunego took off on his own, marked somewhat conspicuously by Vasili Kiriyenka, Valverde’s teammate, and these two gapped the chasing group a little. The move came back and Mosquera countered immediately. He began picking off the remnants of the breakaway as he sojourned up the road, hoping to make contact with Garcia up ahead, who decided to leave all the work to his counterpart, Hesjedal. The Canadian tried to dump the tiny Spaniard at the 3k banner, to no avail.

Mosquera was indeed closing to the pair and that would put the Canadian at a disadvantage. The duo made it to the 1k kite, Mosquera dangled, and behind Gesink attacked hard and immediately established a gap. Joaquim Rodriguez led Valverde and a small group with Evans, Danielson, Cunego, Basso and select others. Gesink picked up Mosquera and sped towards Hesjedal and Garcia, but after Garcia leapt early for the KOM points oddly right before the finish line, Hesjedal jumped and sprinted to his first Grand Tour stage win, the first ever at the Vuelta for a Canadian. 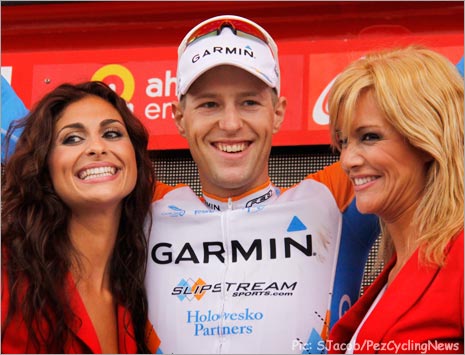 Now THAT is a good feeling! (Word is the Spanish ladies dig Canucks…)!

After his 2nd place, and his teammate Farrar’s sprint win, this win makes the Cinderella Vuelta for the Garmin team complete. Now if Danielson can creep up the GC a little more towards the podium, it’ll seem almost too good to be true.

At the end of the day, no overall changes, but Gesink’s ride did indeed push him up on time just a little bit. Tomorrow will be another really difficult day for the group, so we’ll see then who has the legs and the heart to try to unseat Valverde from the lead. Stay tuned to Pez for the best race coverage there is!

Inside La Vuelta With Ryder Hesjedal