Race Report: David Moncoutie took every mountain top today and a wonderful stage win on the highest point of this Vuelta a Espaсa. Behind, Mosquera showed he must be one of the best super-climbers in the peloton by dropping the favourites; Valverde, Gesink and Basso. Bad luck for Evans and bad news for Sanchez and Danielson, they all lost time today.

Another hard day in Andalucia and the first climb started from the gun, the 3rd Cat Alto de Berja kicks up from the line and as soon as its been crossed the much longer and higher 1st Cat: Puerto de la Ragua at 2,000 meters hove in to view. The mid-section of the stage had some severe undulations including the 3rd Cat Puerto de los Blancares before hitting the humungous Sierra Nevada; a special category climb that tops out at 2,380 meters altitude.

The Heat Is On Early
The battle for mountains points was on and Moncoutie took the first climb and sparked off a break of nine riders; David Moncoutie and Rein Taaramae (Cofidis), Amets Txurruka (Euskaltel), David Garcia (Xacobeo), Adrian Palomares (Contentpolis), Koos Moerenhout (Rabobank), Joaquin Rodriguez (Caisse d’Epargne), Johnny Hoogerland (Vacansoleil) and Pieter Weening (Rabobank). A large group of 19 riders chased after them as the favourites let them get on with it. 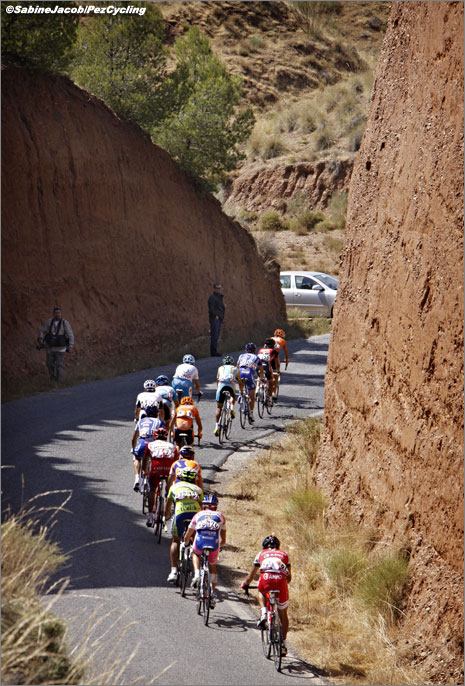 On the tough mid-section Moncoutie, Taaramae and Moerenhout dropped the others in the front group and forged on ahead leaving them to be caught by the chasers making them 25 strong. The gaps had grown to 3 minutes between the three leaders and the chasers and nearly 10 minutes back to the bunch. 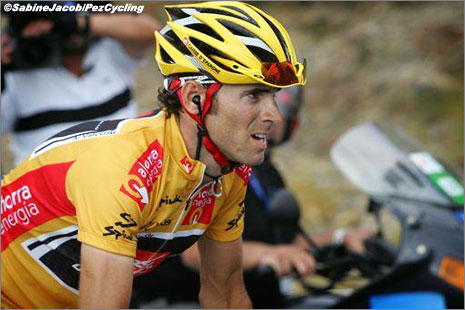 Valverde was once again solid. He has not ever looked to be in any real trouble…so far.

Personally I thought La Vuelta wouldn’t miss Alberto Contador, but with these summit finishes he would have been in his element, would it have been a better race?

The Half Way Point
Going through the sprint at the Troglodyte town of Guadix with 87 kilometres to go the gap between leaders and chasers had grown to 4:30 and to nearly 12 minutes to the peloton, so it looked like the stars were disinterested with racing until they hit the big climb of the Sierra Nevada. The weather at the base of the climb in Granada is warm and dry, but things can be very different up there, I’ve been there in August and it snowed!

Over the top of the third climb of the Puerto de los Blancares (3rd cat); Moncoutie was first again with Moerenhout and Taaramae behind him in that order, David De La Fuente was fourth. Euskaltel-Euskadi thought it was time to chase behind, but the main bunch were still over 12 minutes in arrears and the gap between Moncoutie’s group and the chasers stretched to over 5 minutes.

The BIG Climb
As the leaders hit the start of the Sierra Nevada, with its first part of the climb to the Alto de Monachil (1st Cat), the three split with Moncoutie heading off on his own. Behind Liquigas (for Basso) had had enough and began to close on the big group, reeling them in one by one. 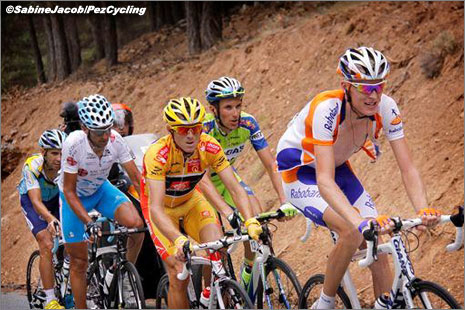 At Monachil with 17.6 hard, uphill kilometres to the summit; Moncoutie was first on his own with a group of ten 6 minutes behind. Liquigas ripped the bunch to pieces leaving only Kreuziger, Basso, Valverde, Evans, Gesink and Mosquera of the race leaders and any of the original group that could hold on as they got caught. “Samu” Sanchez was trying his hardest to get back on terms with the leaders, but it looked like his Vuelta challenge was over, Cunego and Danielson were nowhere to be seen. 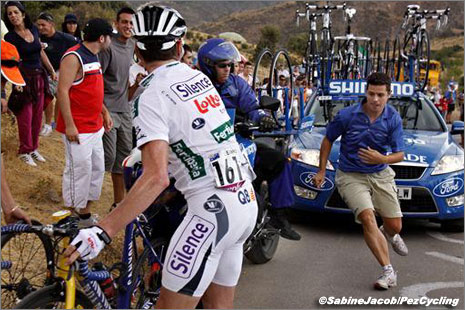 10 K’s To Go!
Basso, Valverde, Mosquera and Gesink rode away from Evans who has a puncture and gets a new bike. Sanchez and Tiralongo (Lampre) with some other riders get up to Evans and start to work as the Valverde group pull in the escapee’s including Garate to help Gesink (Rabobank) and Rodriguez for Valverde (Caisse d’Epargne). Moncoutie still had over 4 minutes in hand with 10 kilometres to the finish. Rodriguez was towing Valverde, Basso, Mosquera, Gesink as Navarro of Astana was yo-yoing just behind them, Evans and Sanchez were more than 1 minute in arrears.

Ezequiel Mosquera shifted up the speed a notch to test the waters, but was soon brought back as Evans was having trouble behind not managing to hold the wheel of Sanchez; Moncoutie was 1 kilometre ahead of the Valverde group as he had 5 kilometres to go.

Basso was doing most of the work and now only had the men who mattered in this Vuelta; Valverde, Mosquera and Gesink. Evans, Cunego, Danielson and Sanchez’s dreams were as good as over, although Sanchez had not given up and was making a good chase on his own. Evans was fighting as best he could with Tiralongo on his wheel, but was not making up much time on the Gold jersey group. 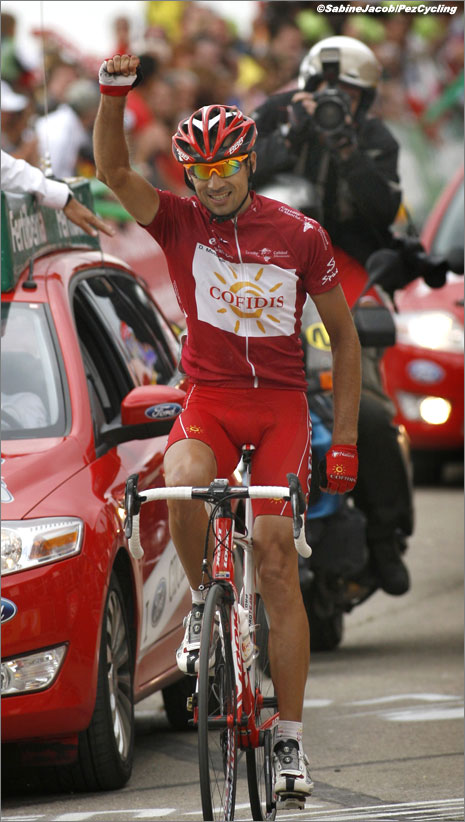 David Moncoutie must have a special place in his heart for the Vuelta. He has been stellar in the past two editions.

David Moncoutie took the stage and puts the mountain jersey firmly on his shoulders as Mosquera attacked the group at the 2 kilometre flag, Valverde gets up to him and then as the other join he attacks again, this time full gas and gains 21 seconds with 1 kilometre to the line. 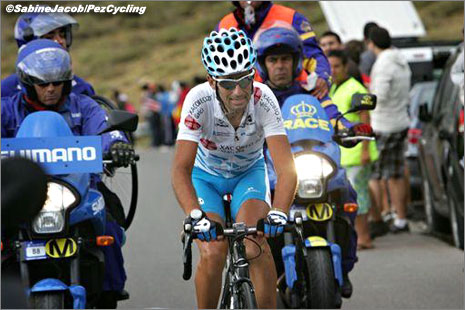 Ezequiel Mosquera looks to be going better and better. A stage win can’t be too far off.

A great win for the Frenchman; Moncoutie and nice to see Mosquera come in second, Valverde jumps Basso and Gesink as Sanchez pushes himself not to lose too much time. A disappointed Evans comes in 50 seconds after Valverde cursing his bad luck at the worst of moments. 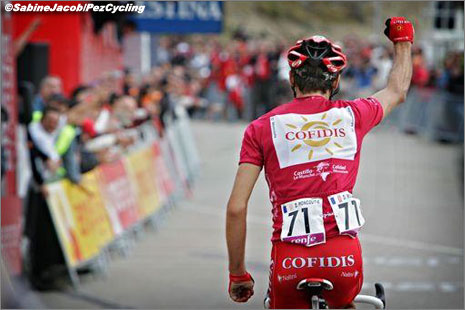 There are a few changes in the overall tonight, but Alejandro Valverde has less riders to worry about over the next days. 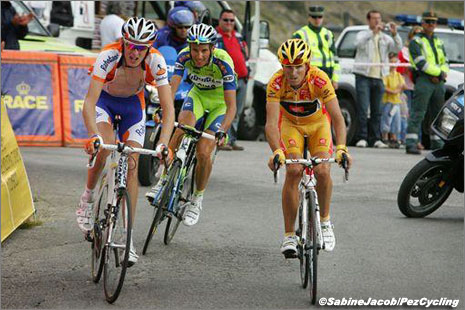 Valverde, Basso, and Gesink crossed the line together: the top 3 on the general classification.

Another hard day tomorrow to La Pandera, stay Pez for the excitement.