Race report: Now might just about be the time to sidle down to your local back-alley bookie, give a shifty, sideways look and slip inside to stick your Euros, Dollars, or preferred local currency on a rather regal little Italian for the World title win at the end of the month.

Damiano Cunego looked mighty impressive as he stormed up La Pandera to take his second stage win of this year’s Vuelta. You’ve got to imagine now that Mr Ballan, Mr Pozatto and Mr Basso might have a harder time convincing their national coach that they’re the guys to support in Mendrisio … 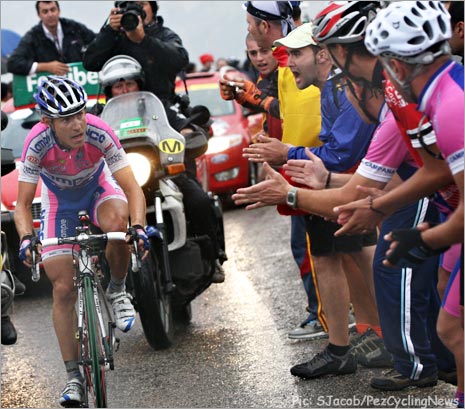 Now, I know it’s “easier” to win when you’re in a big breakaway group that the favorites aren’t too bothered about. But you still have a job to do, and Cunego sliced his opponents to the tune of two-and-a-half minutes – that was the closest Jakob Fuglsang got, with the rest still on the artist’s palette as the paint dried on the Italian’s victory.

It was a short stage today, but still a real slog – a third-category climb in the first half of the race; a real nasty up-down, yo-yo of a course, with a sharp second-category climb (Alto de los Villares) preceding today’s nightmare. 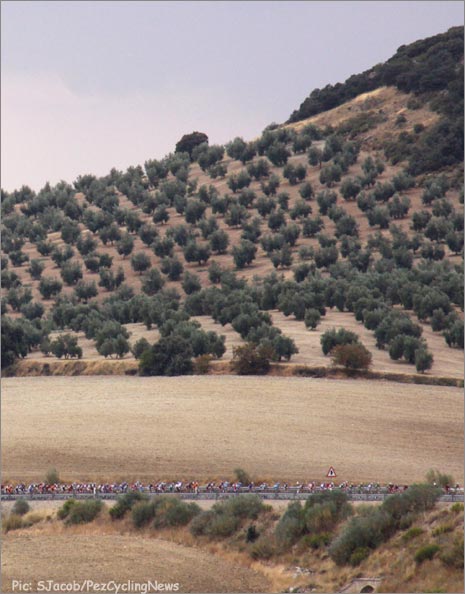 La Pandera, steepling skywards in the last nine kilometers, with stretches up to a tear-inducing 12%, is a happy hunting ground for Valverde. His previous record is two wins from two attempts up here, so he’s the favorite on paper.

The breakaway went early, the top ten overall looked the other way and the escape was gone. It was a ninesome out for a Sunday spin: Cunego, Fuglsang, Christian Knees (Milram), Bram Tankink (Rabobank) and Kevin De Weert (Quick Step) as the foreign contingent. Adrian Palomares (Contentpolis), Gonzalo Rabanal (Xacobeo), Alan Perez (Euskaltel) and Cervelo’s Xavier Florencio representing the honour of the home nation. 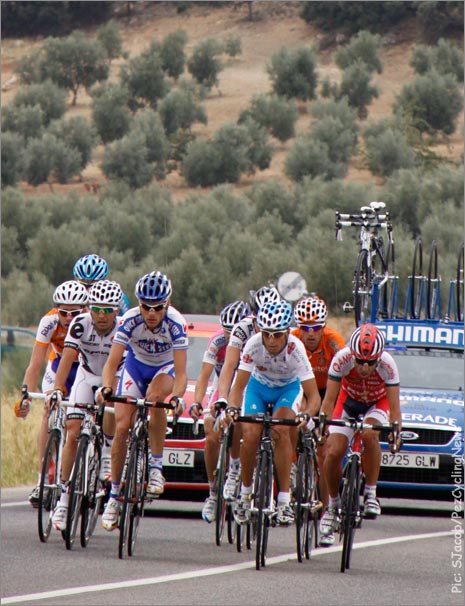 A nice day for an escape.

They pulled out nearly ten minutes before the race behind woke up – there aren’t many more chances to overhaul the classification after this, as it’s our last Grand Tour summit finish for 2009, so Gesink, Sanchez, Basso and company really needed to hurt Valverde if possible.

The rain came on to make matters trickier on the slick roads, and break and peloton (all together) alike were huddling together heading into the closing stages. No hare-brained attempts to bridge up to the escape, and Euskaltel keeping the front of the peloton under control.

Onto the Alto de los Villares, and its Palomares who makes the first significant jump; Cunego and Tankink go after him and make it a lead trio. Cunego has a bit of a think about things and reckons one is preferable to three and puts the hammer down.

The junior royal roars away like he wants to overthrow an out-of-touch monarchy. With about seven kms to the finish, Cunego’s already put a minute into his erstwhile buddies, and the peloton is starting to turn it up. 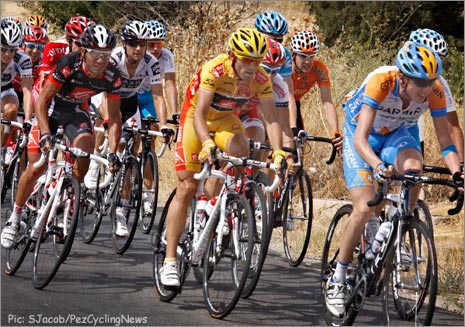 Rabobank are driving it for Gesink, Liquigas for Basso and Valverde’s waiting, waiting …

Cunego batters away, until he hits four kms to go and the gradient reduces even him to just surviving – its 12% now, and it hurts. Fuglsang is between Cunego and the charging peloton …

The classification favorites hit the steep section – this is the chance, as Valverde starts to look more human! He’s falling back – 5, 10, 12 seconds. Evans is dieseling away at the front, you can almost hear his knees crunching as he scraps the pedals over.

Basso, Mosquera and Gesink are with Evans, if they can work together. Sammy Sanchez has just got past Valverde and the gap is tantalizing.

Gesink and Mosquera go for it, with the Spaniard dropping the young Dutchman. One kilometer left, time’s running out …

Valverde goes deep and hauls himself back up to and past Basso. Sanchez and Mosquera are still ahead of him, but Valverde gets hold of Gesink inside the last kilometer.

Cunego’s unconcerned with the overall shenanigans and crosses the line well clear, with arms aloft. Great ride from the Lampre man. Jakob Fuglsang shows yet more promise by hanging in for second place.

Sammy Sanchez outsprints Mosquera for third. Valverde and Gesink come in together for fifth and sixth. 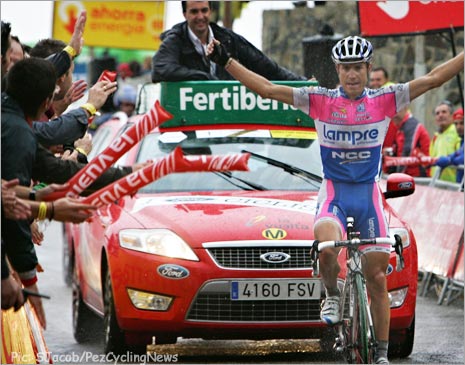 It’s a minor reshuffle overall, as Sanchez leapfrogs Basso into a podium place, but it’s Valverde who is going to be sleeping a little easier tonight in the leader’s jersey with a half-minute in hand on a younger, less experienced rival who he knows he can take in a time trial.

Keep it Pez for all the Vuelta news!