Race Report: Today had an interesting course, but the peloton were not interested and let a group of 13 riders gain over 20 minutes. On the last climb of the day, Lars Boom of Rabobank launched a strong attack from the lead group and time trialled the last 20 kilometres to victory in Cуrdoba.

Yesterday
We nearly saw the legendary bad day that Alejandro Valverde has in every three week Grand Tour, but he had the advantage of knowing the climb of La Pandera very well as he won here in 2003 when he was a young lad. He looked to be in trouble and then came back to distance all his rivals except Sanchez and Mosquera, maybe he has sealed his victory?

Today
The 167.7 kilometres from Jaйn to Cуrdoba start quite easily for the first 110 kilometres until they hit the 33 kilometre circuit for two laps going over the Alto de San Jerуnimo (2nd Cat) twice before dropping down to the finish.

Let Battle Commence!
I wish! There was nothing much to report early on, a few riders tried their luck, including Martijn Maaskrant (Garmin), Iglinsky (Astana), Rabon (Columbia) and Roux (FdesJ), but none managed to stay away. 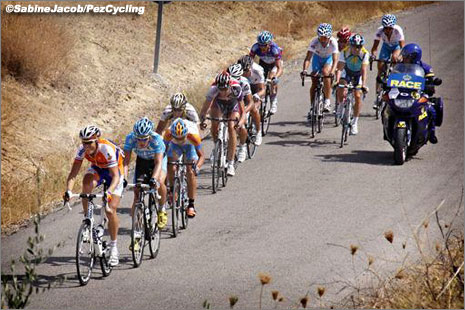 As the lead group came in to the finish town of Cуrdoba for the first time they were nearly 13 minutes up on the Caisse d’Epargne led peloton and had the two hard circuits ahead.

La Vuelta has been to Cуrdoba many times before, the last two winners here were Tom Boonen in 2008 and Paolo Bettini in 2006, but it was a flatter run in on those occasions.

Martinez (Xacobeo) was first over the top first time up the San Jerуnimo and the lead was up to 19 minutes, the chase was not in gear today, Adam Hansen (Columbia) had time to wave and smile to the TV camera as Caisse d’Epargne were leisurely riding at the front, the last few days seemed to have taken their toll! 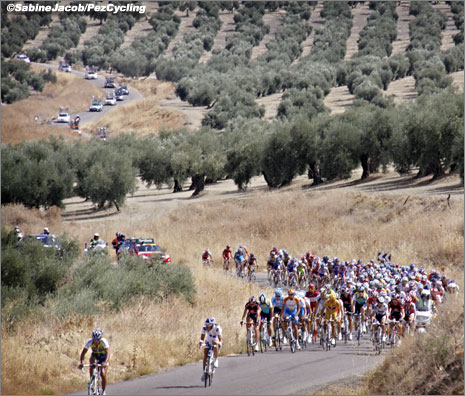 Aitor Hernandez (Euskaltel) crashed on one of the corners, but soon made it back to the main bunch with out a problem, but his kit will need a good wash tonight. Britain’s Roger Hammond (Cervelo) had been sitting on the back of the bunch for a long time, probably suffering from boredom as the day was turning into an expensive club run for the peloton.

Last Lap
The escapee’s crossed the finish line with one lap to go with slightly less than 19 minutes in hand from the disinterested bunch. All the riders in the front group were lowly placed on GC so there was no point in a full on chase.

The leaders knew they would stay away to the finish and started to test each other on the second and last time up the San Jerуnimo, four riders broke away; Reynes (Columbia) and Roels (Milram) were dropped leaving Boom (Rabobank) and Martinez (Xacobeo) ahead. 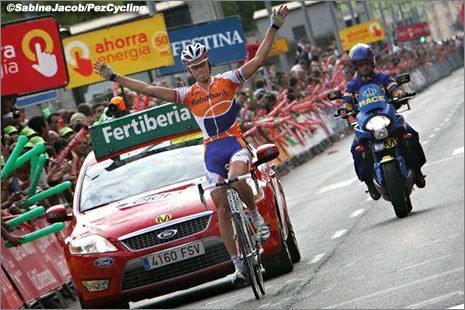 The big Dutchman Lars Boom, ex-World cyclo-cross champ rode Martinez off his wheel with a strong attack, the others spread out down the hill. Serafin Martinez was joined by his Xacobeo team mate; David Herrero, they didn’t stay together long and Herrero started to chase Boom who had a lead of 30 seconds and had the bit between his teeth for the win.

Boom fastened his jersey at the top of the San Jerуnimo and settled down to the fast descent of 11.7 kilometres to the line, at the summit he had around 1 minute on Herrero, 2 minutes on six chasers and 21 minutes on the peloton. Herrero nearly didn’t make it on one corner as he was trying too hard to catch Boom, luckily there was an escape route, but he lost some more time.

Lars Boom didn’t look too pressed as he flew into Cуrdoba, shaking a fist before sitting up to enjoy the accolade of the big crowd, David Herrero was at 1:35, followed by Dominik Roels (Milram) at 1:44, Leonardo Duque (Cofidis) won the sprint for 4th at just over 2 minutes behind Boom. The bunch trundled in…25 minutes later, Geipel taking the bunch sprint. 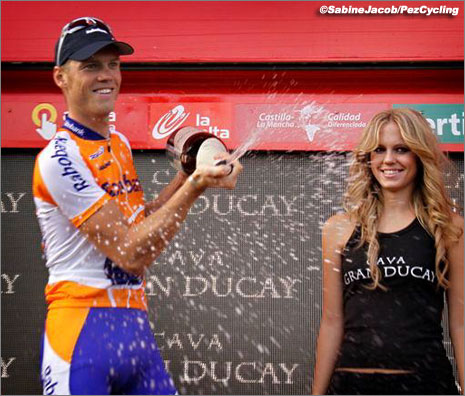 Today was not the most exciting stage and nothing changed overall, tomorrow’s stage to Puertollano could be one for the fast finishers. Sprinter; Leonardo Duque who was 4th said after the finished today “I’m looking forward to the finish tomorrow, today was tactical at the end, but I hope to be going for the sprint either from a group or a bunch tomorrow”.

Toolbox: The Pain of Low Back Pain