Race Report: A second relatively flat day was on course for the Vuelta, and with a crucial Time Trial and Madrid not far ahead, today was ripe for a breakaway. A lone soul trekked most of the day out front, but Andre Greipel snatched victory in the eventual scrum to the line.

An uninterested peloton rolled out of Cordoba to Puertollano and right away Jesus Rosendo Prado (Andalucнa-Cajasur) took his leave of the group and went out alone, forging as much as an 11 minute lead at one point before Columbia set up the slow and steady pursuit with 100km to go. By 75km, the lead had been cut almost 4 minutes to right around 7 minutes. By 60km, 5 and a half minutes. It was clear the group had had enough of the Spaniard’s antics and they were going to reel him in for a bunch sprint. Whichever sprinter’s were left here at the Vuelta, they had their teams pulling at the front. Most of the top tier fast men were at home with their feet up resting up for World’s, so at this point of the last Grand Tour of the year, some lesser sprinters or lead out men had to be licking their chops at their prospects for a stage win.

Flat, warm, sunny, and spotted with stunted trees, Prado pressed on through the flatlands. Only 3 sprint points and 3 Category 3 climbs nuanced the course. And at 53 km left to go, the strung out line of riders in the peloton had reduced the gap to under 5 minutes. See that, Rosendo? That’s writing, and it’s on the wall.

By 35km, the valiant Spaniard was still driving the pedals, but his advantage had slipped to the 2 and a half minute mark. The teams on the front were lining it up, careful perhaps to not make the catch too soon for fear of a counterattack.

With a little over 20km remaining, Milram was on the front obviously for Gerard Ciolek. Like cat with a mouse, they toyed with the lone escapee, keeping him right where they wanted him and not reeling too quickly. The gap sat just under one minute.

And then, after almost 145km on his own, the young Prado was brought back in to the fold. Nice shot, man.

Soon, Quick Step threw a man on the front as well. Then Columbia put a few pairs of legs on the front. The tempo wasn’t ratcheting too incredibly high just yet, this seemed more some shadow boxing by the sprinter’s teams.

By 8km to go the group was finally pencil thin, stretched out and racing full blast into Puertollano. Liquigas was drilling it at the front on behalf of Bennati. The blue and yellow of Vacansoleil was near the heart of the matter as well, no doubt hopeful for Borat Bozic again.

5 or 6 riders were wiped out when a touch of wheels in the top 15 riders took out the likes of Wouter Weylandts (Quick Step) and Julian Dean (Garmin). Tough break. In the confusion up front, Quick Step’s Marco Velo gapped the field, but only momentarily. 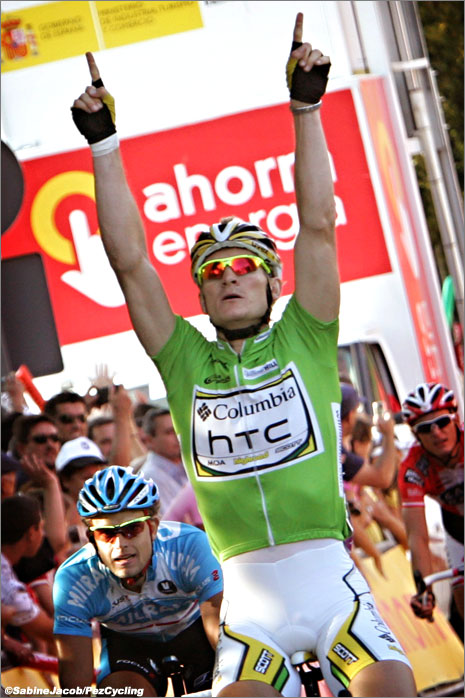 Up the remaining leadout men did their best to drop off their sprinters, and leaping from the scrum (and around Bennati) to win by a wheel was Columbia-HTC’s Andre Greipel! He’s doing justice to that green jersey with performances like that one. The GC remains unchanged.

Stay tuned to Pez as we bring you down the homestretch of the Vuelta! Madrid is on the horizon, but not until a few more bullets are fired in the peloton.

Tour Of Britain Gets PEZ’d: Of Peblis To The Play