Race Report: Anthony Roux singlehandedly saved me from drooling from boredom today with a late race move that had even the most sedate of us out of our seats, cheering him on to victory over the mad dash sprint coming up from behind. It was a wonderful victory for the 22-year-old Frenchman. Read on!

It was one of those days at la Vuelta. The break went really early, the chase was left until late, and everywhere in between, you couldn’t help but think – why exactly am I watching this? The boring transition stages are manageable at the Giro, because it’s the first Grand Tour of the year, manageable at the Tour, because it’s well, the Tour, but the Vuelta? The Vuelta suffers from its spot as last in line. These non-dramatic stages often get the big yawn, and why not? The season is long for us fans too, you know? 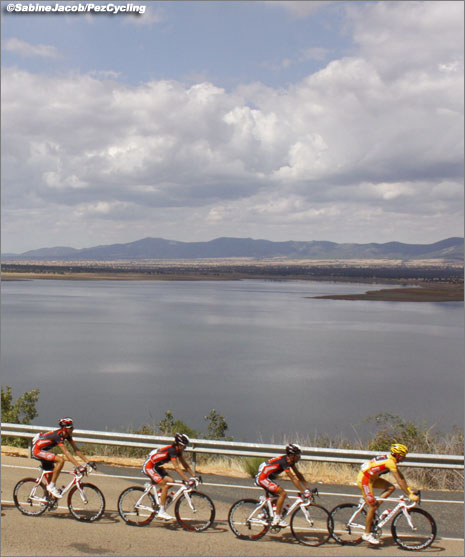 And so it was today. The break went, the peloton yawned, we yawned, and the break churned out a yeoman’s plight for the day. Behind in the field, the only happenings of any consequence were riders falling down from boredom. Robert Gesink and Ezequiel Mosquera were two very notable victims of dozing while driving. You never hear about these two climbers falling down in the mountains (well, not that much) – just goes to show you that their physical as well as mental talents are best utilized uphill. 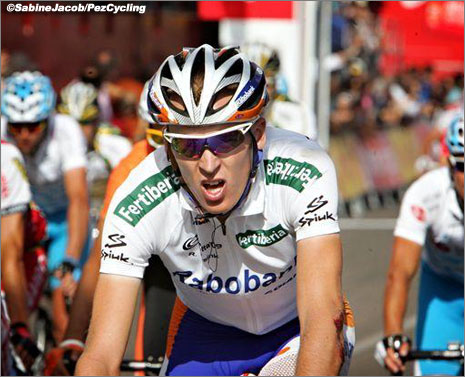 Robert Gesink fell down, but he was ok-ish on the line. He went to the hospital post-stage.

Let’s take a motorbike across the gap to the break, fast forward a century and a half worth of kilometers and take a look at the finale. The field is churning out pavement like a summer thunderstorm chasing you all the way to your front door as you desperately try to keep it at bay to keep those really nice new white socks you just got from being ruined. Or something like that.

The day’s conspirators: Markel Irizar (Euskaltel), Francisco Josй Martнnez (Andalucнa-Cajasur), Anthony Roux (Franзaise des Jeux), Lieuwe Westra (Vacansoleil), and Martijn Maaskant (Garmin-Slipstream. They went inside the first 10k, pushed out to a seven minute cushion, to which the field didn’t care for, and were subsequently given a 300 second leash for most of the day. 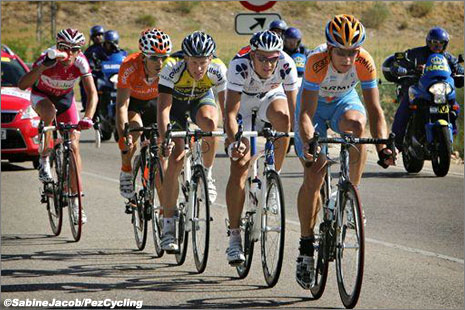 When it came time for that late race tension, the gap was falling faster than a Sammy Sanchez descent, but not quite fast enough. I guess that would mean that the gap was coming down about as fast as an Ivan Basso descent. Either way, the break was being downright stubborn.

With 5k to go, the hitherto happy breakmates all pulled out their respective weapons, sharpened or loaded them, or in the case of Anthony Roux, both.

It was Al’s favorite, Martijn Maaskant, who looked to have cracked the day’s code. He pulled out his battle axe, swung mightily, and left his former friends for dead in his billowing wake. 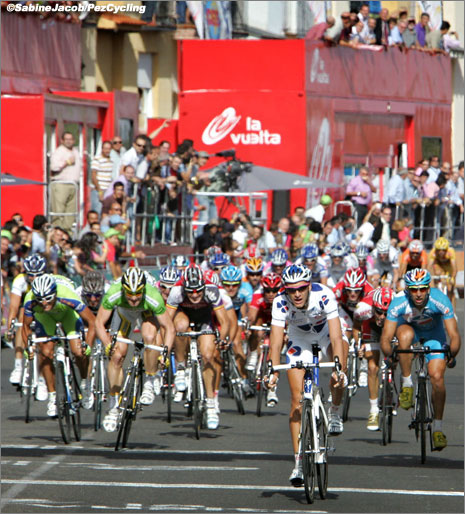 Anthony Roux of Francaise des Joux (last name rhymes with team name? reason for hire) had been in the background sharpening his blade, loading his revolver, just waiting for such a moment. He recognized the merits of Maaskant’s move, saw the look of defeat on his opponents’ visages, took out his six shooter and shot them all down – they were done. As soon as he rocketed from the dying group, the field came a’churning from behind and gobbled up the fresh meat. 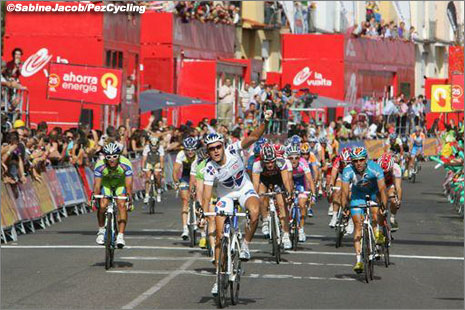 The field wanted more though and set its sights on the two remaining pieces of delectable tissue. Roux was certainly aware that there was a carnivore creeping up on his buttocks, so when he made the juncture with the ailing Maaskant, he took out his blade, jabbed Maaskant in the ribs, and left him for the multi-colored shark grinning its sharp teeth in eager anticipation. 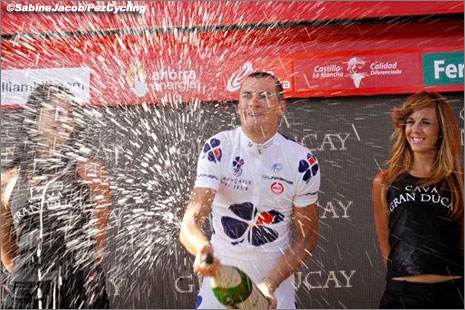 Maaskant was done. His white flag went up, he prepared for his demise. Roux, however, had used his two weapons to perfection. All that was left now, was to see if his motor was running well enough to keep Jaws at bay. The final 500 meters were an agonizing parade of pedal pounding fury. Shark versus man, man versus shark. Oh the drama. The sprint opened up behind Roux, but waver he did not. He groveled, pushed, pried, pulled, pounded, injured his poor pedals, all the way to the line, not even sitting up to breathe in the sweet succulent perfume of success. 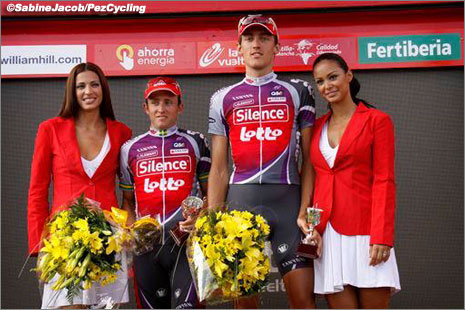 Silence Lotto found their way onto the podium today for the rarely awarded honor of gigantic height difference between teammates. Or something like that.

It was a good day for France – they went 1-2. William Bonnet took the sprint from the field – a notable result if it weren’t for Anthony Roux’s attention stealing victory. David Moncoutie continued the happy France feel when he stepped on stage to receive yet another blood red climber’s jersey. Dare we say that France could be a threat in Mendrisio? We dare not dream such wild dreams.