Race report: For a young guy who’s been knocking on the door for a couple of years now, today’s breakaway was the golden opportunity he’d been waiting for. The day when the planets align, things go the way you hope they will, and nobody else does anything unexpected!

Philip Deignan, with the blue, blue eyes and black, black hair – a little reminiscent of another Celtic star, Stephen Roche, maybe – stormed to a maiden Grand Tour stage win, comfortably the biggest victory of his career, in Бvila this afternoon.

And he did it like a seasoned, dead-eyed pro, taking a chase group by the scruff of the neck when the day’s big breakaway group looked like it was falling to pieces. He caught the front four escapees on the last climb of the day, got clear with Liquigas’ ьber-talent Roman Kreuziger and creamed him in the two-up sprint. 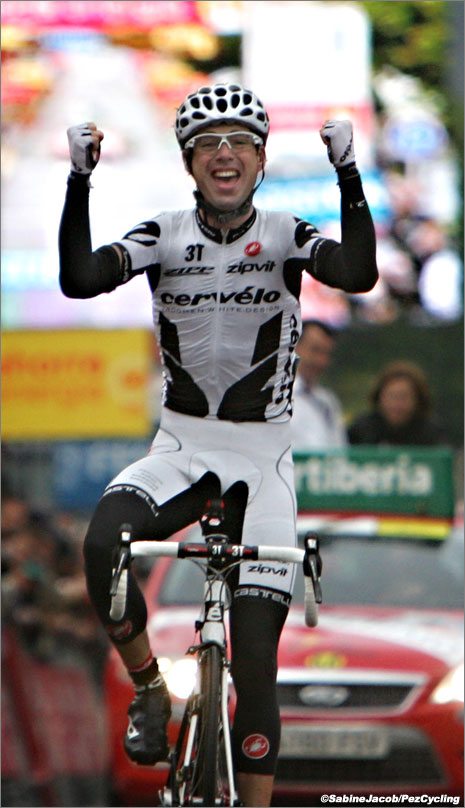 Another brilliant day for the Cervelo team, and Deignan is having a breakthrough, just like Nicolas Roche, Stephen’s son, in the Vuelta last year. He’s into the top ten overall tonight.

What’s in store?
It’s northwards for the peloton today, with a jaggy 187kms including four sharp-shocker climbs, all topping out over 1100m. Then there’s a cobbled slog up into Бvila to round things off. If Robert Gesink is feeling up to it after his recent tumbles, this could be the place to try and shave a few seconds off Valverde’s lead.

It’s also on the chilly side today, especially at the summits, and the rain and general damp isn’t going to sit too well with the riders after some of the scorching days over the last week or two.

Aaaaand …. begin!
Phillipe Gilbert (Silence-Lotto) had a bit of a bash early doors but couldn’t get away; it was a little early for such a marked breakaway-loving rider to sneak off.

Following along behind to make it a dynamic dozen were mountains competition leader David Moncoutiй from Cofidis, Jakob Fuglsang from Saxo Bank and Jesus Del Nero Montes (Fuji-Servetto).

Gilbert had ants in his pants, though, and set off again to bridge the gap and get in on the action – coming too, to reinforce their team mates in the break were SaxoBank’s Matti Breschel, Mickael Cherel of Cofidis and the FDJ veteran Bingen Fernandez.

The breakaway worked well together, gradually pulling away from the peloton once Caisse d’ Epargne and Euskaltel eased off the chase. David Moncoutie hovered up some extra points for the mountains classification on the first-category Puerto de Mijares. 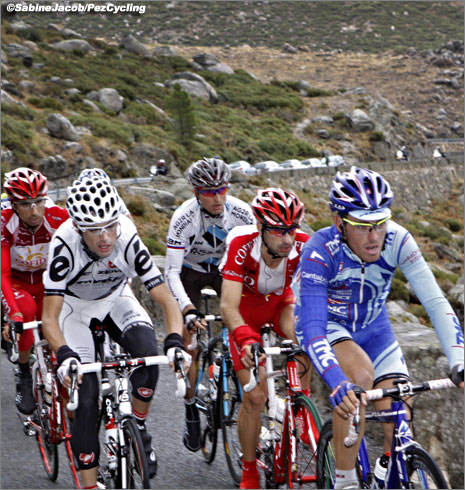 The escapees stayed together beyond the Alto Collado Mediano with 41kms to go, while Tom Danielson – under the weather with sickness – bailed out of the race.

25kms to go, the leaders hit the Alto del Boqueron and Gilbert attacks, big style. Fuglsang is among the chasers, as Gilbert tries to get clear.

Deignan puts the hammer down as the break begins to disintegrate. It’s one of those now or never moves – if you feel strong, you have to go. If you wait for someone else, the race is gone. 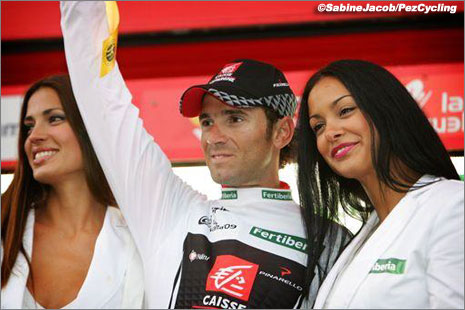 17 clicks left, and Deignan’s effort pays off. Gilbert and the other escapees are caught over the summit … and the Irishman hits the descent full bore with Kreuziger for company.

Fuglsang gives chase, but the gap is going out. It’s an Ireland/Czech Republic TTT to the base of the last cobbled climb to fend off the chasers, but it’s a straight fight between the two for the win. 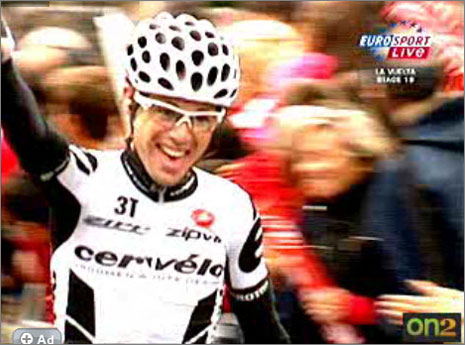 Deignan’s on the front as they head for the finish, and Kreuziger won’t come through. Deignan waits for the Czech to make his move … marks him when Kreuziger opens it up … then flies past with 200m left for the win.

The final outcome: So, great day for Cervelo and congrats to Philip Deignan, but Cofidis might have a bit of explaining to do. Three guys in the 16-rider escape and they managed 7th, 14th and 15th.

A minor split in the peloton got Evans, Sanchez and Valverde an extra second – they all count! – as the field trailed in nearly ten minutes behind Deignan. Still, no significant change overall. We’ll just have to wait for a Sammy Sanchez master class on the final descent tomorrow to spice things up.

Postscript: Spare a thought for Christian Meier from the Garmin-Slipstream team, who flew home today after a family bereavement. The whole Pez team sends condolences and best wishes to the Meier family.