Race Report: This was to be the last chance for anyone with a hope of moving up the GC with several rated climbs on the stage. To make matters more interesting, torrential rain and heavy fog dressed this stage up to be truly epic. The Fuji-Servetto team made good by getting Juan Jose Cobo off the front in the closing kilometers to take a fine win, but there were some serious fireworks going off on the hills. Read on!

Two Category 1’s, one 2, and one 3 awaited the riders, not too terrible in and of themselves, but at the end of three weeks of really hard racing (along with some less-than-timely crashes for some of the favorites) today could do some damage. A much smaller break than yesterday’s got away, featuring the trio of Christophe Riblon (AG2R La Mondiale), Daniel Martin (Garmin-Slipstream) and Eduard Vorganov (Xacobeo Galicia). Their break was up to over 7 minutes at one point, but the usual suspects went to the front of the peloton behind and began the catch. Once caught, the climber’s teams and those of the GC favorites poured the pace on approaching the final Cat 1 climb. Gesink showed signs of weakness on the earlier climbs, but managed to hang in there. 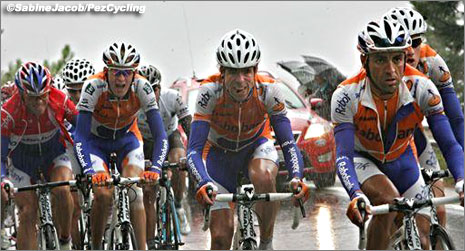 Robert Gesink came within a few days of his first Grand Tour podium…but his injuries from two days ago got the better of him today.

Then under the combined impetus of Euskatel and Caisse d’Espargne, Gesink was losing seconds at the foot of the Puerto de Navacerrada, the final Cat 1 climb of the day. First he was 15 seconds back, then 22, then a few more. He had his Rabobank teammates all around him doing their best to keep their leader in contention. At the front the whittling down continued and after so much hard work by his team, Sammy Sanchez was alone in the lead group, with no more orange clad men in sight. Gesink has stabilized at about a half a minute, but his position in GC was in great peril. The Liquigas and Caisse teams kept pouring it on at the front, and they were both still with numbers, as their leaders Basso and Valverde both looked as fresh as daisies. Some good news for Sanchez near the top, as Igor Anton just hooked back on the tail end of the main group, but could he help?

The group was much smaller, but all the main names were there. Mosquera, Evans, Valverde, Basso, Tiralongo, Cobo, along with a few others. With Gesink in trouble, the others may be inspired to be aggressive and try to take back some time. Outside of a non-selective time Trial coming up tomorrow, this really was the last chance for any climber hoping to move up in the GC. 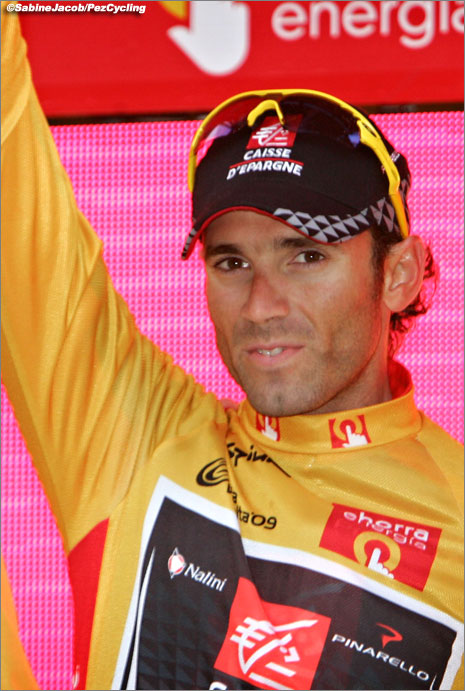 Barring alien abduction or a positive drug test, Valverde is in with his first Vuelta victory.

Upwards through the rain and dense fog, the Liquigas team still dictated the pace to the others. Szymd was doing a stellar job for his captain Basso. Poor Gesink was now a minute back and listing hard to starboard. Sanchez had had enough and he put in a big dig, ruffling the group but only for a second as the Liquigas duo marshaled him and went right back to pacemaking. The move did hurt a few of the Caisse teammates, who struggled to get back on. So Sanchez went again, but again was marshaled by the green and blue. This was truly do-or-die time, so there’s no use in holding anything back. Juan Jose Cobo tried his hand as well and took off, and that drew the sting of Sanchez and Valverde, who quickly marked the little man. Once caught, Sammy Sanchez pushed ahead, with only Valverde able to hang on at first over the top.

The descent had a somewhat timid looking Sanchez racing down with Valverde, with the big names not far behind. Well, except for the young Dutchman Gesink, who was now a buck and a half down on the lead group. Mosquerra was first to make the junction back with the leading pair, and Basso had separated himself from the rest of the main group to hold 4th position on the downhill road. The heavy rains made the descent tricky for everyone, as all the riders were taking conservative lines, especially towards the bottom of the climb where the turns were a bit tighter. Basso played it a little more cautiously and he was the last to hook up as the group that was in the lead over the summit coagulated at the bottom. 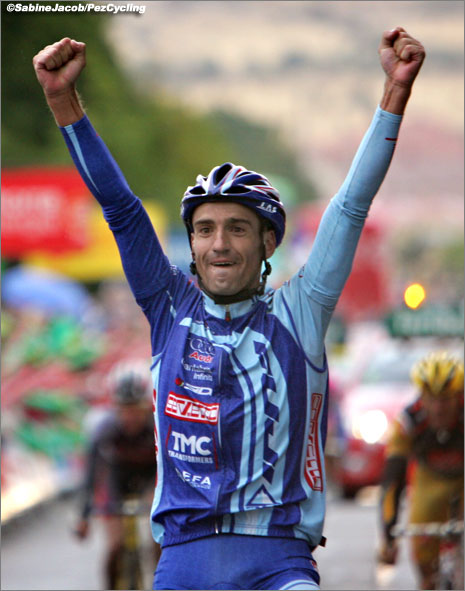 Once down the mountain in the flats and nearing the finish, the leaders kept the pace hot, but Juan Jose Cobo had visions of opening Fuji-Servetto’s account in this year’s Vuelta and he went off the front on his own.

A few sharp turns leading to the finish were made a wee bit more difficult for the speeds they were holding. Behind the group was closing fast on Cobo, but he had just enough left in the tank to hold off the charging peloton which now numbered only about ten or so. 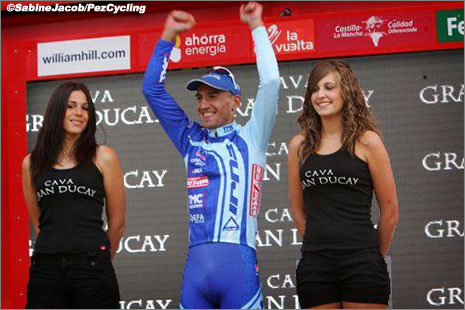 Another few groups limped across the line as the minutes ticked by. At the 2 minute mark, still no Gesink. But the young man should be bolstered by his stellar grand tour, hampered by a late crash no doubt. 4:40 later, he limped in under the wings of his teammates. 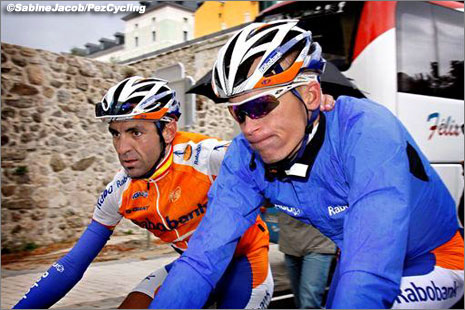 Tomorrow a relatively short and flat time trial awaits, and then it’s the final parade into Madrid on Sunday and as of now, it looks like Valverde is almost certain to take the top overall prize. But who knows, anything can happen. Stay tuned to Pez as we close out the final Grand Tour of 2009!