Race Report: Today David Millar won his 5th stage in all his Vuelta’s, he was given one of the swords that Toledo is famous for along with the large bottle of Cava. But the day has to go to Alejandro Valverde who consolidated his overall victory. Loser of the day was Basso who lost his podium place.

Toledo was the old capital city of Spain at one time and is where the best swords were manufactured, with an overall lead of 1 minute and 26 seconds over Sammy Sanchez its unlikely that Alejandro Valverde will need a sword to win the Vuelta. One of Spain’s most famous cyclists, Federico “The Eagle of Toledo” Bahamontes, is from the city and was the first Spanish winner of the Tour de France. The course today is a technical 27.8 kilometres with some slight rises, but on the whole fairly flat. 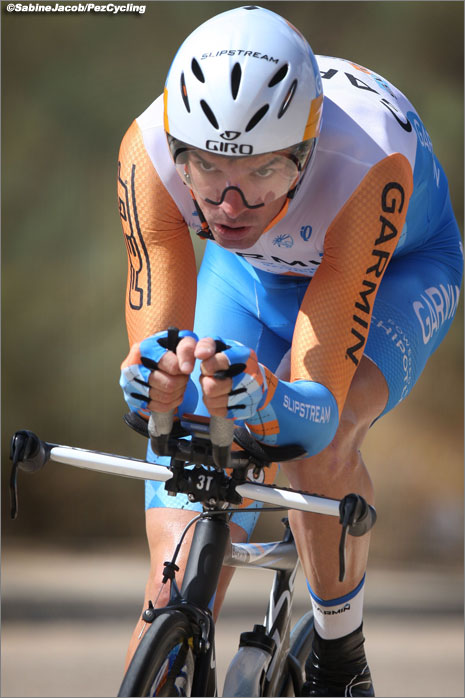 Millar has said that he was aiming for the final TT. Saying you’re aiming for it and actually getting it are two different things though. Millar put forth a great ride on Saturday.

The Early Starters
First of the favourite; David Millar of Garmin had been saying that he would put up a good time today. He had won the Cuenca time trial in the 2006 Vuelta beating Cancellara and Vinokourov, the 33 kilometre course was very similar to todays. He set the bar for everyone to beat with a time of 35:53, pushing Westra of Vacansoliel down to second with his time of 36:36, but there were many more riders to come in at this point. 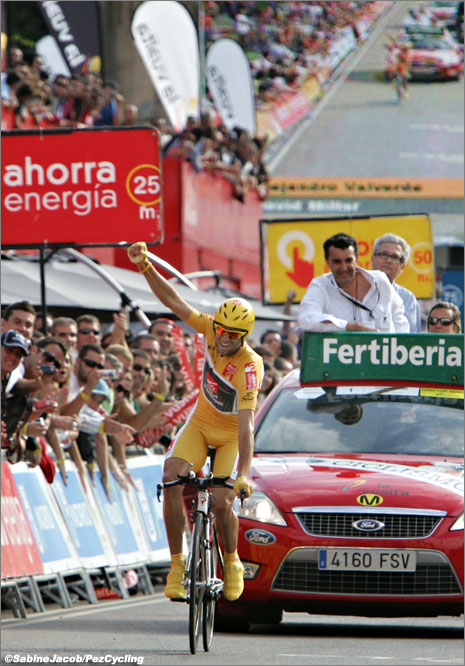 The next big name to finish was Liquigas rider; Roman Kreuziger, but he was slower by 30 seconds to Millar. Out on the course Philippe Gilbert (Silence-Lotto) was burning up the intermediate time cheques, though he must have blown as he was 34 seconds slower than Millar. Ex-Belgian champ; Stijn Devolder was well off the mark over a minute adrift.

All the top men were warming up on the rollers under blue skies and warm temperatures, many of them were sporting bandages, the most obvious being Mosquera and Gesink, if it hadn’t have been for that crash two days ago the Dutchman might have been fighting for the overall today? 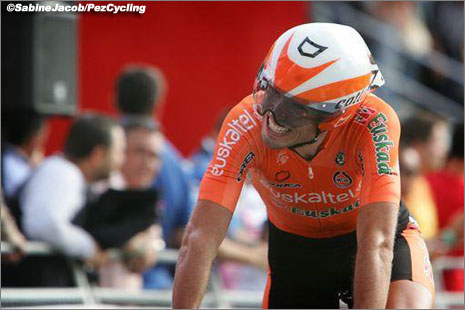 Sammy Sanchez came closest to getting the measure of David Millar, but it just wasn’t quite enough.

Gustavo Cйsar Veloso (Xacobeo) puts op a good enough time to go second to Millar with 36:13, young gun Philip Deignan (Cervelo) was already out on the course as the unlucky Robert Gesink (Rabobank) was being pushed off by a pretty young girl in a short white skirt.

The Top Ten Hit The Road
Alejandro Valverde was last to push off from the start house as David Millar was still top of the leader’s board, of the other leaders Evans looked to be pushing a big gear with great force as compared to Basso who was spinning much more.

As to be expected Valverde and Sanchez were getting the biggest cheers from the large crowds along the course, Cadel Evans style was working as at the first time cheque (10km) he was up by 11 seconds on Ivan Basso whom he had to beat by 14 seconds to put himself on the podium.

The battle for the lead was not all going Valverde’s way as he was down on Sanchez. Evans caught his two minute man; Mosquera as they came up to the second time check (19.5km) for Evans to be only 5 seconds slower than Millar, Basso was 46 seconds slower, Sanchez 11 seconds slower and Valverde at 26 seconds. 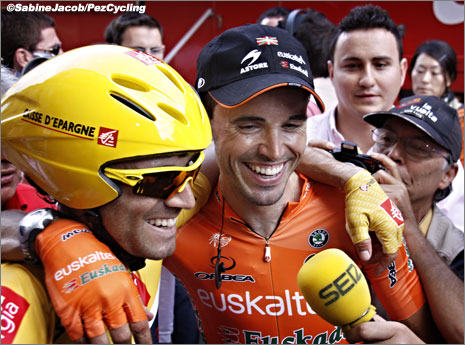 At the finish Cadel Evans gave it his all to cross the line 9 seconds slower than Millar, but now sure of his 3rd place overall as Basso was 54 seconds slower than him. Sanchez rode a very fast last K’s to finish only 5 seconds behind Millar for a great second place, but it was never going to be enough to take the gold jersey of overall. Alejandro Valverde finished with one hand in the air, 35 seconds down in 7th place and the victor of the 2009 Vuelta a Espaсa. 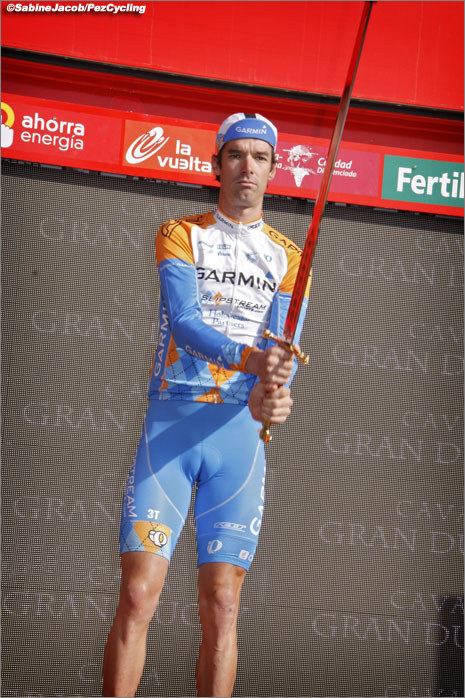 Some races give you a donkey (KBK), others a beer (countless), and today, it was a sword.

Stay Pez for the last stage in Madrid tomorrow. 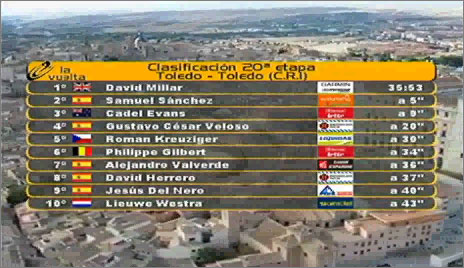 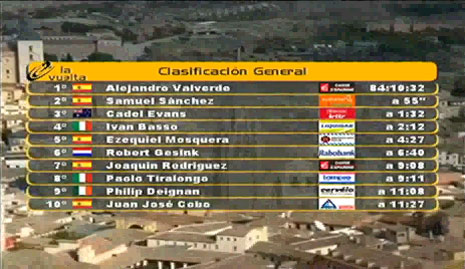