Race report: Alejandro Valverde stayed upright to seal his Vuelta victory – the first Grand Tour win of his career. On such a short stage, there was very little that could have happened to alter the overall outcome. I guess that might just happen in a courtroom somewhere down the line.

What was in store … Pretty much pan flat the whole way, from the satellite town of Rivas Vaciamadrid, into the Spanish capital. The stage is rounded off with six circuits of six kilometers, including large swathes of the 2005 World Championship course. The sprinters remaining in the race will be rubbing their mitts with glee. 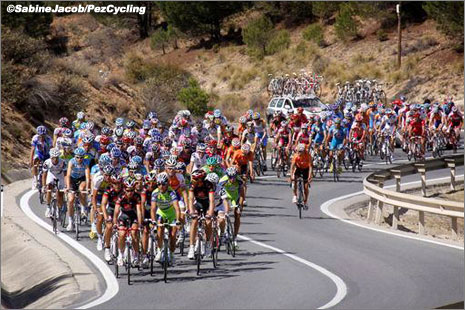 Just your average tomfoolery, larking about, photocalls and telephone interviews. Caisse d’ Epargne made way for Columbia-HTC at the first intermediate sprint, so Valverde had obviously decided it would be bad form to even think about trying to steal the green jersey off Greipel’s back!

The soon retiring Bingen Fernandez of Cofidis got the honour of towing the peloton into Madrid, and things took off once the riders hit the closing circuits. 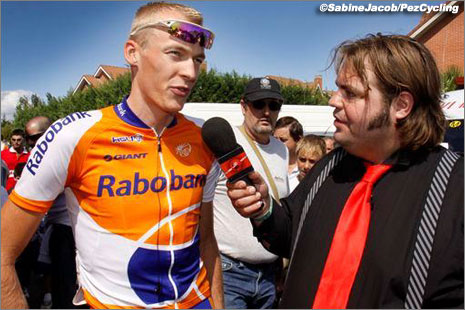 Robert Gesink to reporter: ‘Yes, in my next Grand Tour, I will pay special attention to my most serious rival – the pavement.’

The lead was never significant as the sprinters’ teams were working. Liquigas, QuickStep, Vacansoleil. SaxoBank had Kurt-Asle Arvesen and Alexsandr Kolobnev up front for Matti Breschel. The escapees are hauled in on the last lap and the speed is ferocious.

Into the last couple of clicks, and Liquigas, Columbia-HTC and Vacansoleil are all trying to make it happen. The peloton is splitting slightly as a Liquigas-dominated group is pulling away in the closing metres. 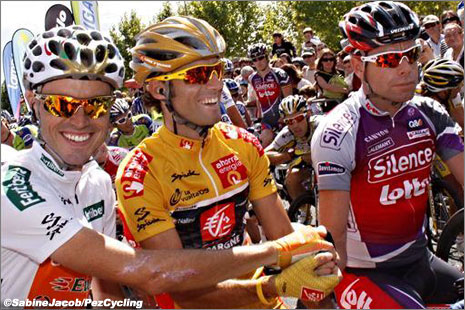 The top three share a photo or 100 before the start of the final stage. Cadel Evans is about as good as Lance at hiding his disappointment in 3rd place.

There’s a coming together on the right-hand side inside the last kilometer – like iron fillings to a magnet, a handful of riders simply gravitate into the barriers, but it’s not too high-speed and only egos seem bruised.

Matti Breschel – who won here last year – is caught up in it, and loses the chance to repeat his Vuelta victory. 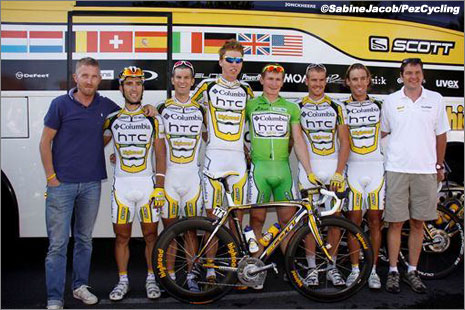 Ho hum, just another successful stage pillaging at a Grand Tour gone by for Columbia…five stages in all.

Liquigas do the work for Bennati, but Greipel steams through for an ‘easy’ win, and a Cavendish-style victory gesture. He frames his sponsor’s logo with his hands in a rather artistic pose. It’s been another ace GT performance from Columbia-HTC and there’s no doubt which team is the number one sprint outfit on planet cycling.

Valverde rolls home safely and takes the fnal gold jersey of this, and possibly any other Vuelta. It’ll be rojo next year, and maybe Valverde will still be around to defend his victory.

He rode sensibly, if not spectacularly, over the last three weeks and with the support of the strongest team in the race took the win. 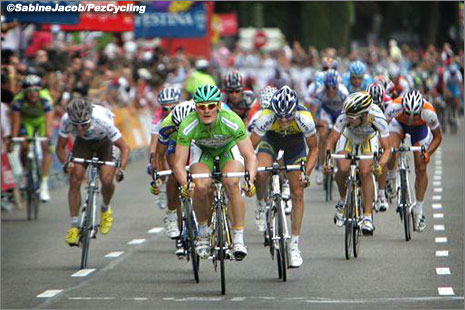 Another win for Andre Greipel – that makes four!

Congrats to Valverde, Greipel and David Moncoutiй in the climber’s jersey – worthy winners for their efforts.

Lots more to come from Pez! Just because the Vuelta is done and dusted doesn’t mean you can switch off – the World Champs begin on Wednesday and we’ll be bringing you all the action from the Mendrisio roadside. Don’t touch that dial!

Moving Toward Worlds With Rubens Bertogliati