Race Report: The first day in the mountains was all we hoped for and more. The early break nearly pulled off the coup and made it to the line. If only it wasn’t for a resurgent former Giro winner and umpteen victor at the Giro di Lombardia: Damiano Cunego. Cunego seems to have found his best at an ideal time: a strong Vuelta first, then it’s on to Worlds and back to Como.

We sometimes call him the Little Prince, or even the Kid. He’s not really a kid anymore. He’s nigh 28 years old, but Damiano Cunego still holds the interesting position of young hope. Most of us have long cancelled his Grand Tour winning possibilities, but the Italian is a real one-day threat. With his win on the Aitana today, of course, we know that his plans for end of season domination are beginning to show themselves, but what about the race he’s riding right now? La Vuelta? On his best, Cunego is a climber par excellence. Can he continue his obviously fine climbing for two more weeks and manage a spot on the podium, perhaps the top step? 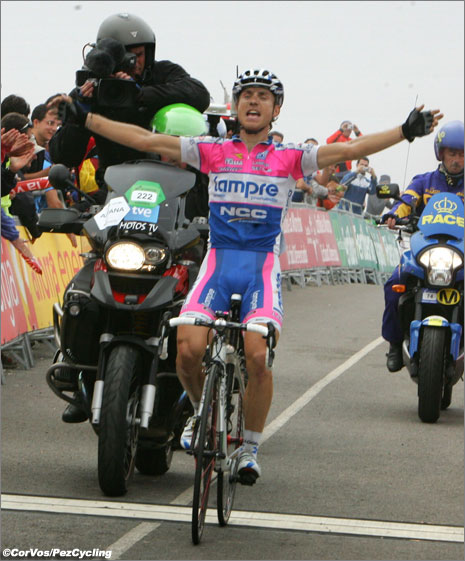 After his win by a solid half minute today, it’s impossible to think anything other than: Damiano Cunego’s fire is flickering, and he’ll be aiming to stoke that fire the rest of the Vuelta until it’s on full blast furnace by the end of the month. A fire hot Damiano Cunego in September? More likely than the top step of the podium in Madrid in two weeks time, you better believe his eyes are hard on the upcoming Worlds and his favorite race of all, the Giro di Lombardia. 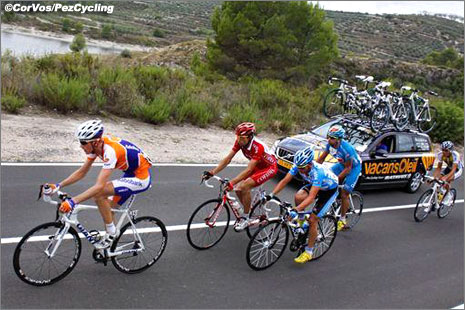 This wasn’t just a day for Damiano Cunego though. Cadel Evans appears to be rising from the ashes of his disappointing Tour de France. Evans finished a solid 4th today and with that effort, hopped onto the GC top step by way of his Kangaroo Gaerne’s. Evans’ lead is slim, the mountains in front of him nearly innumerable, but even at this moment, Evans has accomplished a noteworthy feat: he has worn the leader’s jersey at all of the Grand Tours. That’s a pretty significant honor, no? 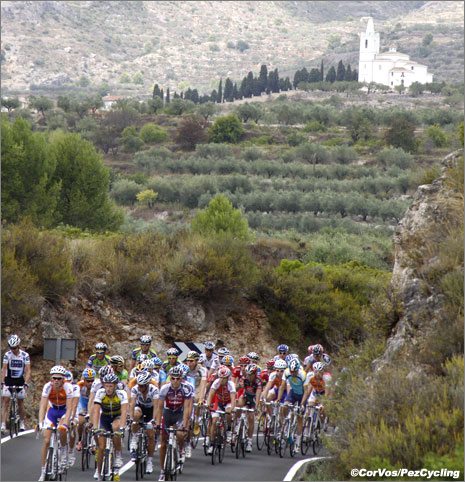 Anyhow, let’s take a look back at the race that was a bit, shall we? Of course, I would be remiss if I didn’t insert something about an early break at this point. So here you are: Pieter Weening (Rabobank), David Moncoutie (Cofidis), Johnny Hoogerland (Vacansoleil), Sйbastien Hinault (AG2R La Mondiale), Paul Voss (Team Milram) and William Bonnet (BBox Bouygues Telecom) managed to jerk their way off the front after a ferocious start to the day. As with most days that start off a’snarling and a’howling, once the break goes, the field nods off for a little siesta. So it was today. 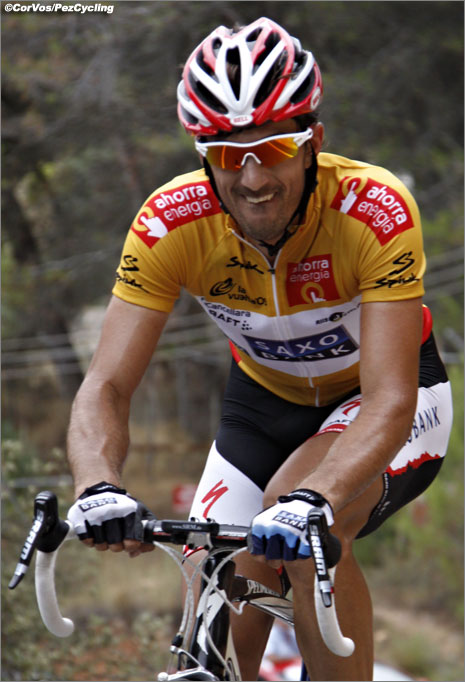 The break’s leash was a long one, almost long enough for the brave boys up front to make it to the line. Almost being the key word here. Behind, Fabian Cancellara waged an in the end fruitless battle to hold onto the lead group. He muscled his substantial frame up the 6 of the 8 climbs, but came to grief on the penultimate climb of the day. After that, Cancellara offered up heaps of time losses, eventually limping home to almost 26 minutes of time donations. But hey, what do you expect, right? I’ll tell you what I expect: an incredible final month of the season. Cancellara has said that he wishes to win all of the five Monuments before he’s done. Why not add another to his cap with Lombardia? Don’t say impossible when you speak of Fabian Cancellara, just don’t do it, it’s not wise. 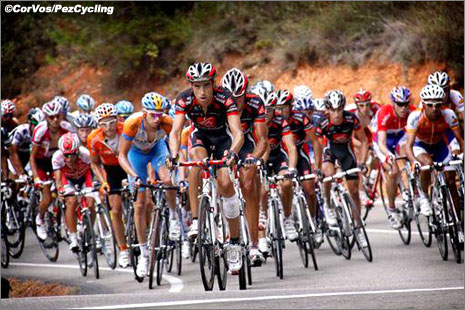 Anyhow, back to our lovely story of breaks toiling away, and pelotons being constantly whittled down by cruel GC teams. We’ll just take this theme, fast forward it a bit, and begin on the final climb to Aitana. 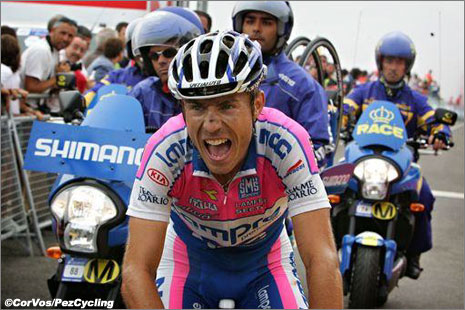 The Aitana numbers 21k, but it’s only in its final few kilometers where it reveals itself as an evil lady of the night. As the break hit the early slopes, it fell all to pieces. Johnny Hoogerland of Vacansoleil, continuing an already successful Vuelta courtesy Borut Bozic, soldiered on all by his lonesome, until Vuelta loving David Moncoutie found some watts somewhere deep in his soul to ride back up to Hoogerland…and drop him. 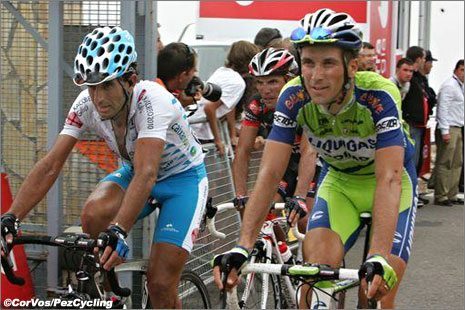 Behind, the favorites were finally forced to show their strengths, or lack of. Not quite surprisingly, Alexandre Vinokourov, got his card punched at the back of the group and set about losing time. Expect to see him attacking soon. It just wouldn’t be Vino if he didn’t lose time somewhere, otherwise he’d never have an excuse to attack. The Schlecks also had a rough day of it – Andy Schleck pulled out complaining of stomach cramps whilst Frank did his best to give up a couple of days worth of time. Saxo Bank’s other hope, Jakob Fuglsang also managed to cough up significant time on the final climb. All in all, a real crap day for the Bankers of Saxo. 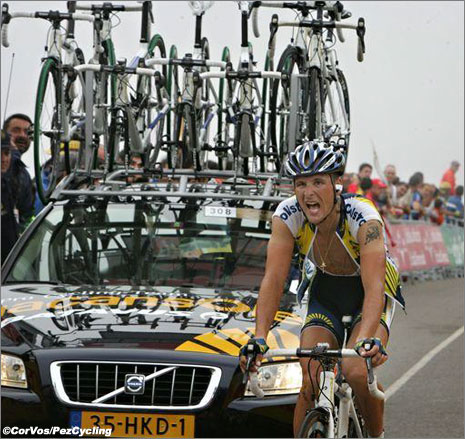 With 3k to go, Moncoutie was alone at the head of affairs, Hoogerland was still doggedly pursuing him, and Basso opened up the clash of the favorites with an attack…that went nowhere. Not long afterwards though, it was Cunego who put in a stirring effort that saw him sail away from the favorites, across to Hoogerland, then Moncoutie, and off to the promised land of stage glory. 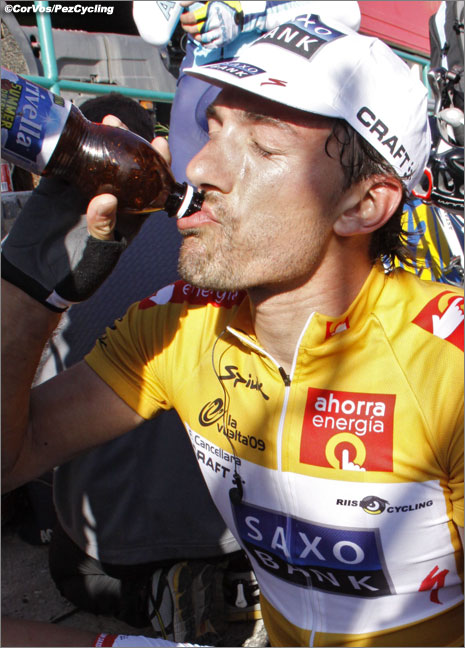 Robert Gesink took off a bit late, but managed to charge off to gain a few precious seconds. He nearly caught Moncoutie on the line, but Moncoutie had just enough to hold off the rabid Dutch dog of Gesink (who in this metaphor was of course foaming at the mouth and snarling). 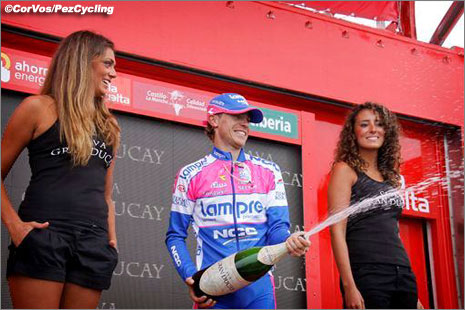 Evans, Sanchez, and Valverde followed just a few ticks behind Gesink, with most of the rest of the favorites including Mosquera and Basso a further few ticks of the second hand behind. 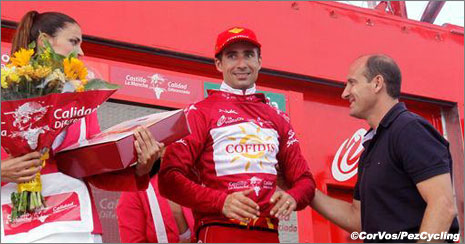 At the end of the day, Cunego was spraying the collected masses with champagne, Evans was glowing in Gold, and David Moncoutie’s efforts landed him in the climber’s jersey. 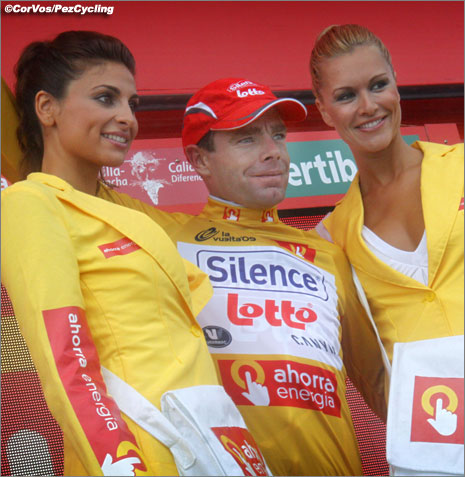 Stay tuned tomorrow – there’s much more fun in the montanas to come!