Vuelta’09 St.9: All Hail The Underdog

Race Report: Glory for underdogs Xacobeo Galicia as Gustavo Cesar Veloso won into Xorret de Cati from a race long break, with a smile a mile wide on his face; but the scariest ever face from Lotto’s Cadel Evans as he blamed Robert Gesink (Rabobank) for baulking him as the ‘heads’ sprinted for the third place bonus on this stage 9 of the 2009 Vuelta – the vital seconds won by a nitrous oxide boosted Alejandro Valverde (Caisse) and duly cladding him in gold.

It’s unlikely that Evans would have beaten the Spaniard – who is very hard to best at the end, on a course like this – but I would wait a day or two before you tell him that; the last time I saw eyes like that was in the movie ‘The Omen.’ 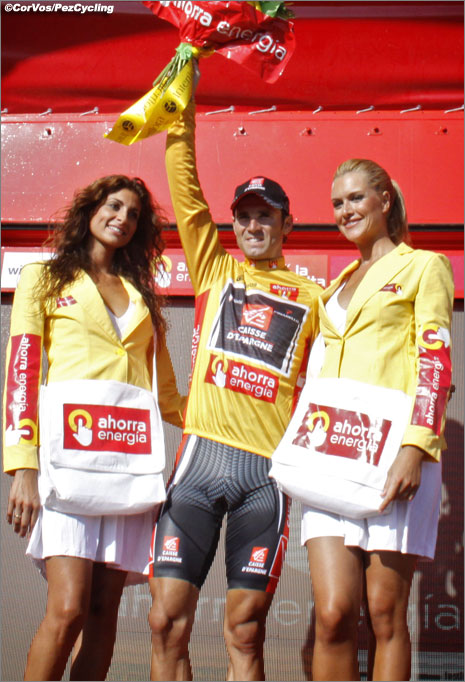 Alejandro Valverde’s blistering fast finishing speed was enough to catapult him into the overall lead today.

Cesar Veloso and Valverde were the big winners – albeit Caisse now carry the heavy burden of gold relatively early in the proceedings – Evans (now 7 seconds down on Valverde) didn’t give away much; nor did Gesink and Basso, who only conceded the bonus to Valverde; the losers were Tom Danielson (Garmin), and Samuel Sanchez (Euskaltel) who finished 32 and 49 seconds respectively behind the new leader. Nor was it a good day for the stage winner’s boss, Ezequiel Mosquera who dropped the same 32 seconds as Danielson. 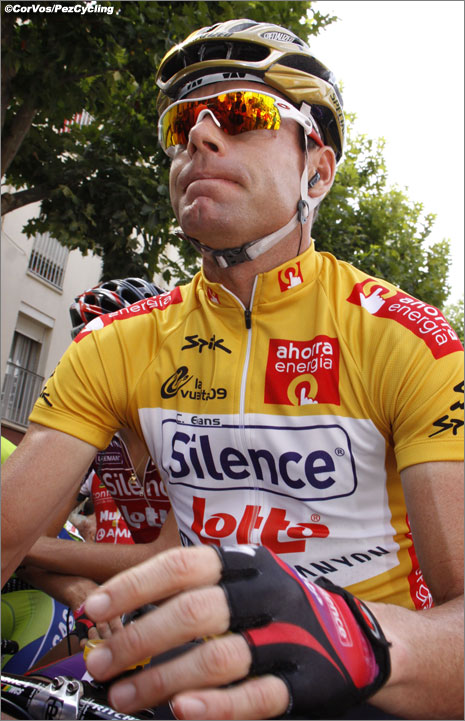 Cadel Evans on the other hand, did not have the benefit of rocket powered sprinting legs – he’s now seven seconds down on Valverde.

The break of the day – some seven strong – went very early in the stage, before most of the peloton had even got comfortable on their saddles; Stijn Devolder (Belgium & Quickstep), Marco Marzano (Italy & Lampre), Rein Taarame (Estonian & Cofidis); with the other four all Spanish – David de la Fuente (Fuji), Julien Sanchez (Contentpolis), Gustavo Cesar Veloso (Galicia) and Jose Lopez Gil (Andalucia).

With de la Fuente the closest to Cadel Evans gold jersey at 13:31 the composition of the break was perfect, albeit Evans’ henchmen never let things get out of hand; five, six, nearly seven minutes was fine – but no more than that as they worked effectively through the rolling parcours.

The parcours too were perfect for a breakaway with four second and two third category climbs before the main obstacle of the day – which came with nine kilometres to go – the Alto de Xorret de Calti.

Even the weather played ball, with blue skies and temperatures in 20’s, no one would get roasted. 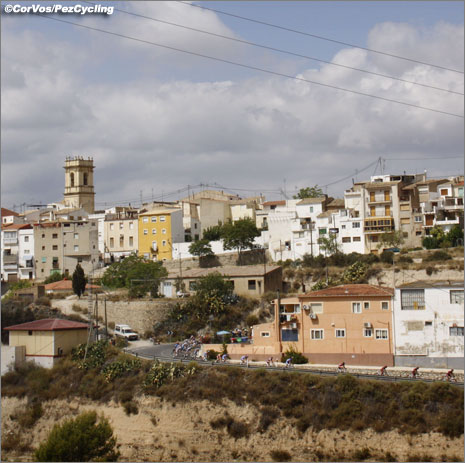 At ten kilometres to go; one kilometre from the bottom of the climb, the relaxed vibe in the bunch gave way to strong positional riding as Caisse maneuvered for Valverde; Garmin did the same for Danielson with Rabobank showing interest too for Gesink; and Cadel looked very alert. At the 10 K banner it looked like the break was safe with a five minute lead, but in almost as little time as it takes to write, the ‘heads’ chopped two minutes out of that.

As the gradient bit, the hitherto perfectly spelling break began to splinter, with Estonian champion Taarame doing the damage and forging clear on a big gear. 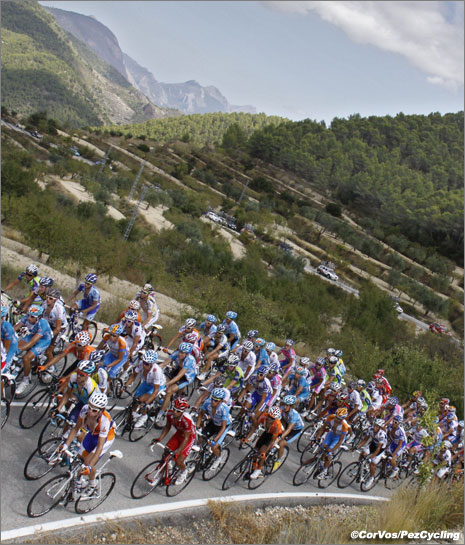 Behind, Kiryienka drove for Valverde, Evans hunched and stabbed, Basso cruised, Gesink grimaced and Rodriguez attacked for Caisse as Valverde watched and waited.

As the gradient stiffened, Taarame’s big gear didn’t look like such a good idea as his revs reached stalling point.

Behind the usual bouncing style of Rodriguez wasn’t working as he slipped back to his team leader. Evans decided to impose himself upon the chase at four K to go with Valverde, Gesink and Basso in close attendance. 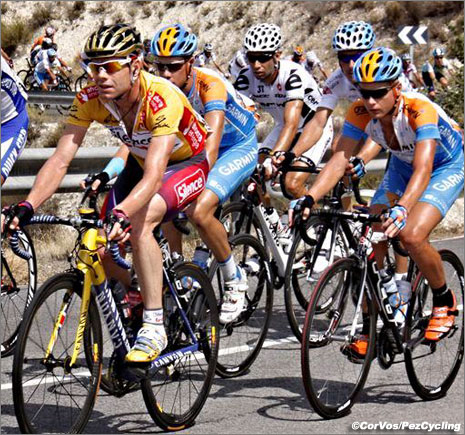 Evans has looked impressive so far. Losing Gold wasn’t too much of a loss. He’ll be vying for it in the days to come.

Up front, the Estonian cracked as fellow break survivors Marzano and Cesar forced themselves back up and past him, with Cesar Veloso just that little bit tougher and faster over the top.

Valverde launched a vicious attack near the summit but Cadel was having none of it, matching every pedal stroke.

The descent held no fears for a man from Galicia – a province where there’s little flat road and the 29 year old Cesar Veloso was topping 80 kph through the tinder dry olive groves off the Alto and down to the finish.

Hands high in classic style, he celebrated in fine style – his best result since winning overall in last season’s Tour of Catalonia and sitting nicely with his 2006 Tour of Portugal stage win. 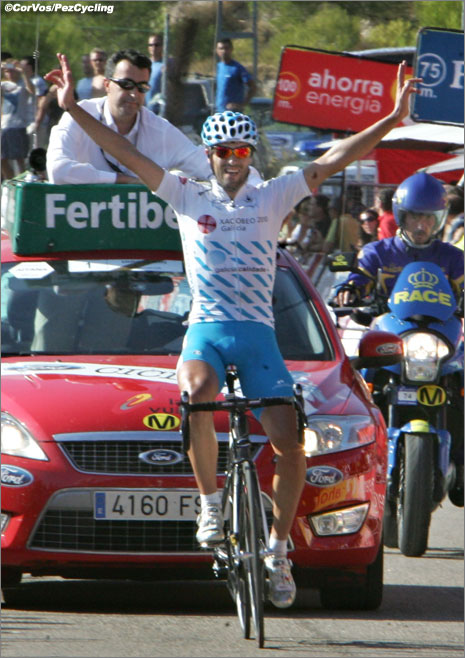 Gustavo Cesar Veloso took a great win for himself and his Xacobeo Galicia squad.

Marzano held on for second then it was fun time as Valverde scorched, Gesink wavered a little and Cadel – well, he terrified us! 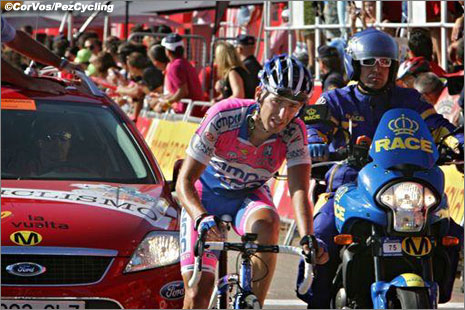 Marco Marzano managed a solid 2nd place out of the break.