Race Report: The longest day yet of the ’10 Vuelta saw the riders tackling 183 km from Mбlaga to Valdepeсas de Jaйn. Philippe Gilbert started the day in red, but a break of four went up the road early.

Today marks a somber day in cycling as we bid a sad farewell to Laurent Fignon, one of the Tour greats. He will be greatly missed and remembered as a true champion.

Philippe Gilbert, resplendent in his first leader’s jersey of his career, wouldn’t have too much trouble with today’s course, harboring only two cat 2 and one cat 3 climb and a finish eerily similar to yesterday’s with one 20% short feature toward the line. The sprinters’ teams would be mitigated by that short steep climb, but some teams – most notably Sky and HTC – have lost integral parts of their workforce due to a stomach bug working its way through the peloton.

With 50 km to go, the quartet of escapees was still working smoothly with a lead of just shy of 5 minutes. They had been away since 16 km into the race, and your four stars for the day were Guillaume Bonnafond ( AG2R), Sergio Carrasco (Andalucia-CajaSur), Dario Cataldo ((Quick Step) and Dominik Roels (Milram).

At 40km to go, the lead of the break was slowly shortening and the peloton was starting to show some signs of life in the chase. The break was moving just fine, despite a fat man having spent some time running alongside them with his pants around his ankles. Brevity is the soul of wit, and I hope those boys got a chuckle out of that.

At 30km to go, Katusha had moved some men to the front to help the chase effort. Joachin Rodriguez had to be on their minds. He was close yesterday, and had mentioned before today’s stage that the steep finish was up his alley and he was going to try.

By the 25km mark, the breakaway started their games as Bonnaford and Cataldo managed to separate from the other two on one of the lumpy bits of the course. But by 20km, the gap was down to 1:42 to the pack. The writing was on the wall for the escapees as they briefly rejoined and then immediately started attacking each other.

At 15km the peloton hit the final climb of the course, and Katusha went to the front to drive it for their man Rodriguez, and the acceleration quickly split the group. Those that stayed up front were strung out in a straight line and the pressure was clearly on. The big names of Frank Schleck, red jersey wearer Philipe Gilbert, and Carlos Sastre, and others had made the split. This Cat 2 climb of Puerto de Valdepeсas was stinging the legs with just 10km to go.

Katusha still pushed the pace up front and turned the screws on the survivors. Liquigas was well represented at the front, as was Caisse d’Espargne. Sastre lost contact and was leading a short chase behind the group, and getting no help.

A short dash was ahead, and then a veritable ramp leading to the finish line. It was short, but creeped up to 20% in some spots.

At 3km, Luis Leon Sanchez of Caisse d’Espargne took off on his own with a furious dig. Sanchez got clawed back and Rigoberto Uran took off on the counter attack, executed with textbook precision. Euskatel gave chase as Uran hit the steep wall at the finish under 1km. 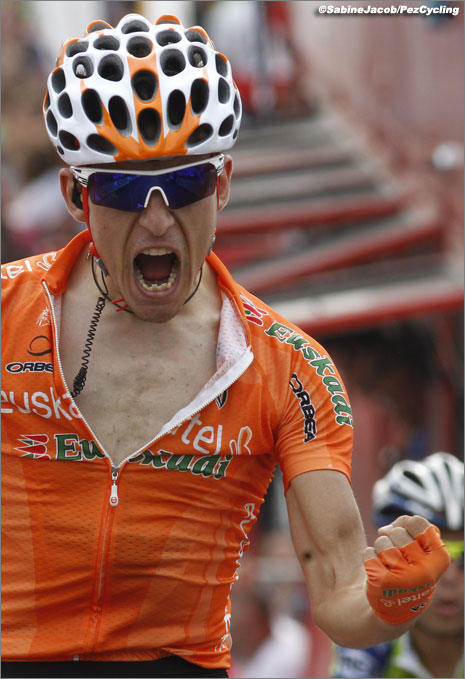 The chase was so close behind and as the riders hit the slopes it was every man for himself. So very steep, and lined with thousands of fans, what a sight.

Rodriguez had waited for this moment and took off, Nibali held on tight too. Gilbert was right there too as now the top guys up the climb numbered less than 10. Igor Anton of Euskaltel caught the Spaniard first and made a deep dig and quickly got a little gap. It was enough for victory as he finished just a few lengths ahead of a furiously chasing small group.