Race Report: Aggressive and opportunistic Caisse d’Epargne domestique David Lopez was the man who grabbed the stage win glory at the top of the punishing drag into Alcoi at the end of another long hot day in the saddle with Euskaltel’s Igor Anton doggedly hanging on to the leader’s jersey despite Joaquin Rodriguez trying to wrest that single – but vital – second from him in the finale.

The other big winner on the stage was French veteran David Moncoutie who spent another long day at the head of affairs to scoop up enough points to go top in the mountains competition.

‘Close but no cigar’ award of the day goes to Omega Pharma-Lotto Frenchman Jean-Christophe Peraud who was red jersey on the road as the race came into the closing stages. 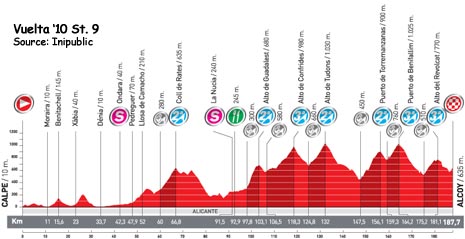 Stage 9: 188kms and more lumps than a Bugs Bunny cartoon.

Moncoutie was feeling frisky early, despite his stage winning exertions on Saturday and was off in search of mountains points before the first hour was in, Peraud and Gonzalo Rabunal (Xacobeo Galicia) joined him and the race was on.

A further dozen or so came up: Oscar Pujol (Cervelo), Biel Kadri (AG2R), Javier Ramirez (Andalucia-CajaSur), Enrico Gasparotto (Astana), Perrig Quemeneur (Bbox), Egoi Martinez (Euskaltel), Roman Kreuziger (Liquigas); Jelle Vanendert (Omega Pharma-Lotto), Carlos Barredo (QuickStep), Dario Cataldo (QuickStep), Gianpaolo Caruso (Katusha) and David Lopez (Caisse d’Epargne).
In the heart of Al Hamilton territory it was Rabunal taking the first of the mountains points on the Col de Rates at 67 K from Moncoutie and Peraud.
The second K of M, the Alto de Guadalest at 99 K also went to Rabunal from Moncoutie and Pujol and under the third banner on the Alto de Confrides at 115 K it was again the Xacobeo man first from Viktor’s favourite rider – Moncoutie, and Peraud. 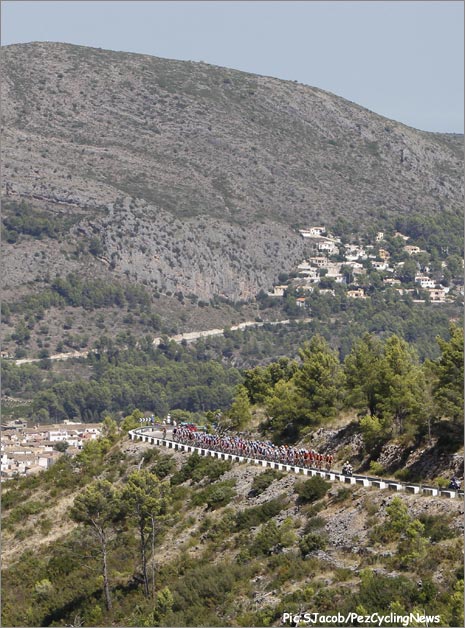 Barredo dropped off the break; his presence as 22nd placed rider at only 3:30 on GC dooming it to being on heavy duty elastic that just wouldn’t stretch.
At the other end of the group, Rabunal grabbed the top spot, solo over the Alto de Tudons at 130 K; vital points to deny Moncoutie – the closest rival of the Galician’s team mate Serafin Martinez who wears the mountains jersey.
But to no avail; all those second places for the slim man in his 14th season with Cofidis slid him past Martinez. 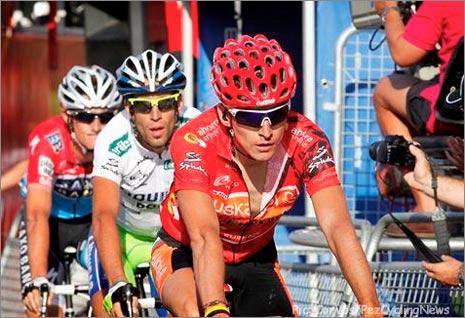 Pays Basque 2010 king of the mountains Rabunal had bigger things in mind though, pressing on alone as behind the break foxed, countered, stalled and bluffed.

Meanwhile, the gap soared back to the bunch – eight minutes, making it look as if 2008 VTT Olympic silver medallist and 2009 French elite time trial champion Peraud could be in red at the end of the day. 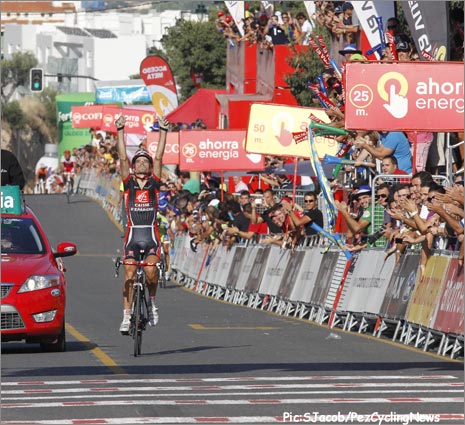 Images of a cruising bunch only strengthened the Frenchman’s position, as up front Rabunal stuck to the job, oak coloured legs pumping the cranks of that BH with total commitment.

The fragmented break couldn’t get it together and were compatto as Rabunal grabbed more solo points at the top of the Puerto de Torremanzanas, around 150 K in – his lead 46 seconds, with Moncoutie snaffling a point or two behind to consolidate his KoM lead.

The yawning gap back to the peloton was 9:29 – a gap guaranteed to raise Peraud’s spirits; unsurprisingly, he was the man seen most at the front of the break, aided by Moncoutie, keen to keep the points coming.

A mountains jersey draped over the bedroom chair is always nice to wake up to on the first rest day.

Into the last half hour of the stage and it was over for Rabunal, back in the break but ‘job done’ with good TV exposure for the team and points withheld from Moncoutie. He can enjoy his rest day, whatever happens.

Peraud’s team mate Vanendert was now the man carrying the heavy cross into the last 20 K and over the top of the Puerto de Benifallim – where Moncoutie lapped up those points – the 2007 Vlaamse Pijl Harelbeke winner knew he could expect little help from the rest.

His game was called ‘red jersey’ but the others were playing ‘stage win.’
With 14 K to go it was David Lopez making a strong dig on one of the little rises – it’s a long time since that stage win in the 2007 Deutschland Tour, David.

The remarkable Moncoutie chugged up to Lopez, his legs may be skinny but they can churn the big gears; Peraud chased hard, his podium dreams sliding as Euskaltel organised the chase back in the peloton.

Kreuziger, bridged to the two leaders along with Martinez and Caruso to make it five up front.

Lopez went again; at four K he had 12 seconds, at three it was 19 as he forced that Pinarello over the smooth tarmac into Alcoi. 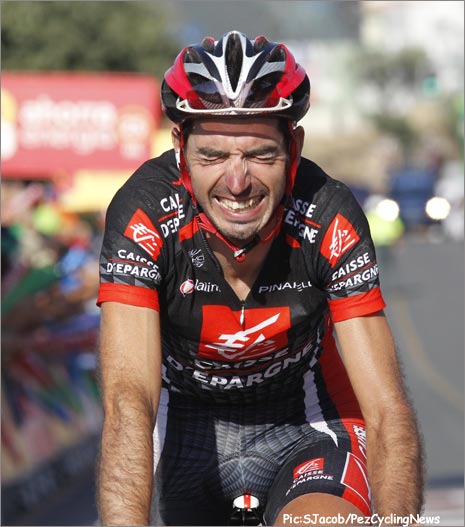 At the red kite it looked like the Caisse man had it, and so it proved.
Kreuziger took second with a late rush, Caruso third but it was Lopez covering his face with his hands then throwing his arms high – and every rider will be looking forward to that rest day.