On Wednesday I wrote a quick review of next year’s Vuelta a Espaсa from what I saw on the TV. So, sticking with tradition, I bought the Spanish sports dailies, Marca and AS, and took myself to Bar Pol-Mar in the village for a good perusal and almuerzo (mid-morning snack).

As normal, the bar was very busy with the usual mix of workers and retired gentlemen, but today was even busier due to the inauguration of the new Mayoress. She is taking over from the last Mayor who is now in Villena (Vuelta stage 8 start town) prison waiting judgement on his contract shooting of the previous Mayor, but that’s a different story! 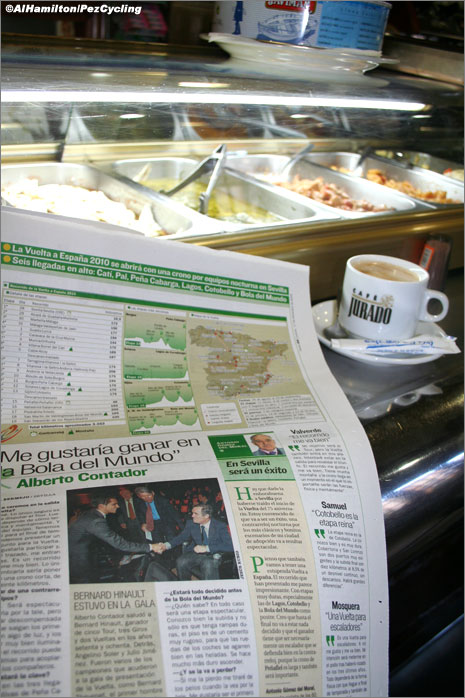 La Vuelta 2010: In Depth
Taking a closer look at the route and details, or noticing what I missed yesterday, it’s obvious that this is a mighty Vuelta. It’s a very hard route with six summit finishes and four other hard climbing days, crossing forty categorised climbs, all this with only 62.5 kilometres against the clock, 46 of them solo, a hard-man’s race!

What’s New?
First off has to be the opening team time trial. I hope the street lights in Sevilla are good as the first team is off at 21:00 and the last at 23:00. On stage 10 to Vilanova i la Geltrъ the climb of the Rat Penat (Bat in English) comes 30 kilometres before the finish. Perico Delgado described it as “el Angliru catalбn” it’s not as long at 4.5 kilometers, but it has ramps up to 23%. 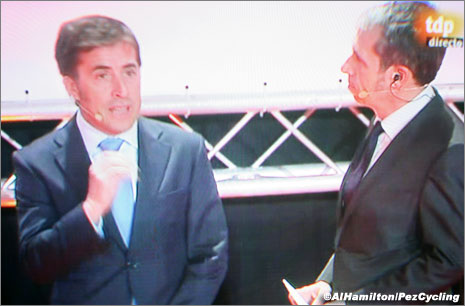 The Cottobello summit finish on stage 16 from Gijуn comes after a very difficult day with three previous climbs. Olympic champ; Sammy Sбnchez lives locally and thinks this “Queen stage” is his stage to show his worth, it is also being named the “Cima Chechu Rubiera” after local hero Josй Luis Rubiera. The last climb of the Vuelta on stage 20 is the summit finish to the Bola del Mundo. It sits at 2250 meters altitude and it has a concrete road surface, the race could be lost here, so there should be excitement to the very end. 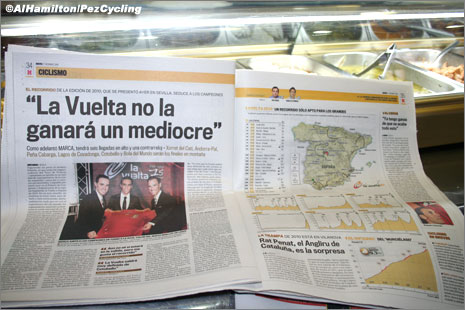 I forgot to mention the leader’s jersey which is also new, it’s been yellow, then gold and next year it will be red to celebrate the success of the Spanish national football and basketball teams. Also this is the 75th anniversary of La Vuelta and the 65th edition.

Old Climbs Return
The Lagos de Covadonga has seen some classic battles over the years, 1997 saw a battle royal between eventual winner; Zulle and Tonkov, then the year before between Zulle and Jalabert, but in 1987 the little Colombian Herrera took the lead from previous yellow jersey wearers; Dietzen and Sean Kelly.

Xorret del Cati in Alicante is steep and comes at the end of a stage of a saw tooth profile, five climbs and then BANG, the Cati. The road to Andorra is always high, but steady and then the Peсa Cabarga summit finish on stage 14 is short and steep, but comes at the end of another hard day.

What The Riders Think:
Ezequiel Mosquera
The Galician climber thinks; “it’s as difficult as last year, I like the route as it is for climbers, it’s very attractive to me. There are some new climbs, so it will be less predictable than previous years.”

Alberto Contador
Tour, Giro and Vuelta winner said; I think it’s going to be a great Vuelta for the spectators, but tough for the riders. If I ride it I would prefer another time trial. Stage 16 (to Cotobello) will be one of the biggest and also the second last stage (to Bola del Mundo) is going to be tough as the road surfaces are difficult. It has some nice ideas this Vuelta.” 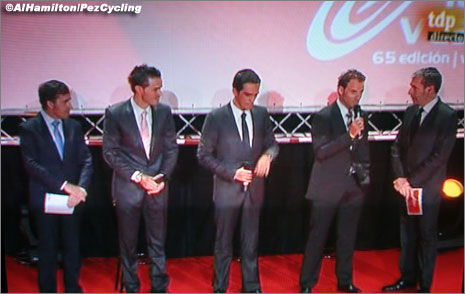 Samuel Sбnchez
Olympic champion; “it’s a hard Vuelta and a good Vuelta. The climb of the Cotobello is close to my home, it would be special for me to win there. There could be a few opportunities on the descents! It’s a beautiful Vuelta and I will do my best in it.”

Alejandro Valverde
Last year’s winner; “before La Vuelta I will ride the Tour and aim for the podium. I like the Vuelta a lot, it is very good. There are a lot of mountains with several important stages at altitude. There is just one time trial which is good for me; it’s not a time trial for the specialists, but for a strong rider.” 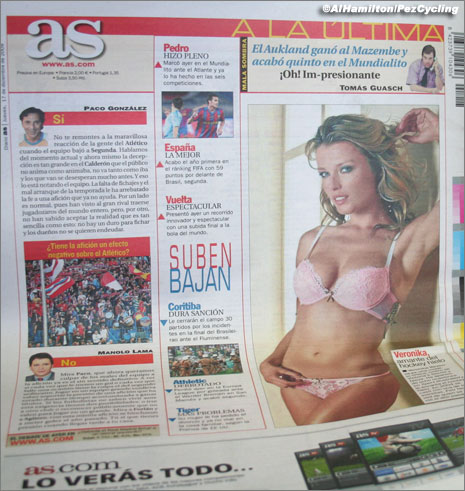 And holding to tradition, any article by our original Daily Distraction photographer would be remiss to without someone distracting.

And In The Bar?
Most of the early drinkers were pleased with the route as there are three stages that are fairly close by, and stage 9 from Calpe to Alcoy will pass the village, just like last year on the stage to the summit finish on the Aitana. A hard race that will sort out the men from the boys!

Can’t wait for August the 28th, and let’s not forget the podium girls!