Roadside St.7: Today there was a big fast sprint into Orihuela, before that the fast men had to get themselves over a bit of a climb. Some got dropped, but they all got together for the gallop into town. Surprisingly I managed to see the hill and the sprint action…here it is:

After missing yesterday’s stage I thought it might be nice for a change to see some bike racing as I usually see the start and the finish and nothing in between, except what’s on TV. Surprisingly it all went to plan, if you set out to do something at a race it usually goes wrong, but quite often you have a different adventure and probably the worst thing to happen is that you miss lunch. 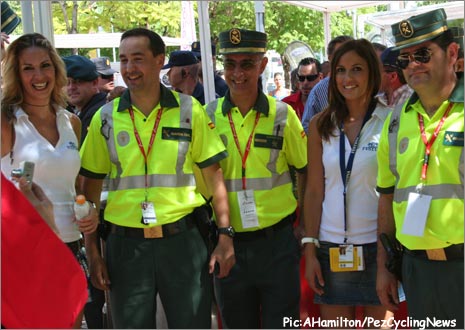 The start village was the usual mix of old women wanting anything they can lay their hands on from food to hats, well anything that’s free basically, and race staff looking for breakfast/lunch (start is at 13:40) and water for later, and policemen posing with young girls! Today along with the stunt bikers and the jugglers on stilts there were actors in medieval clothing promoting “The Film of the Year!” Lope, I’ve no idea if it’s any good. 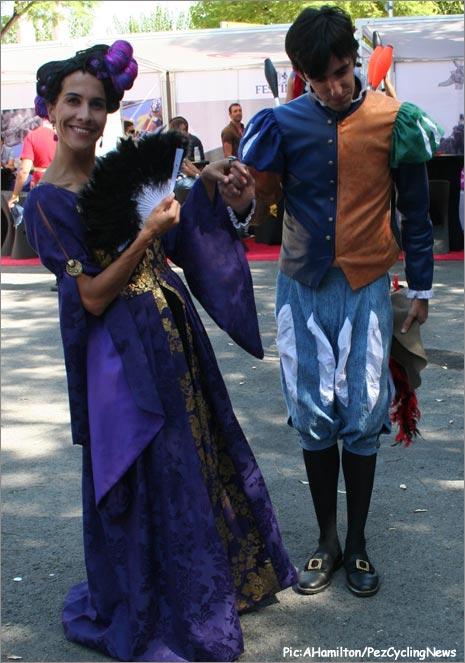 Previous years the riders used to always come in for coffee, a read of the paper and a chat, but now they all sit in their busses till the last second, jump out, sign on and line up, or as has been happening-missing the sign on. But I managed to get some photos of the stars. 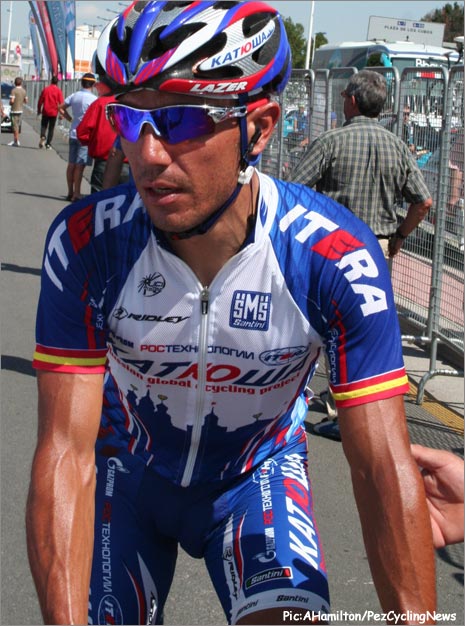 Katusha’s Joaquin Rodriguez looks very lean & tanned, and will show himself when we hit the mountains. 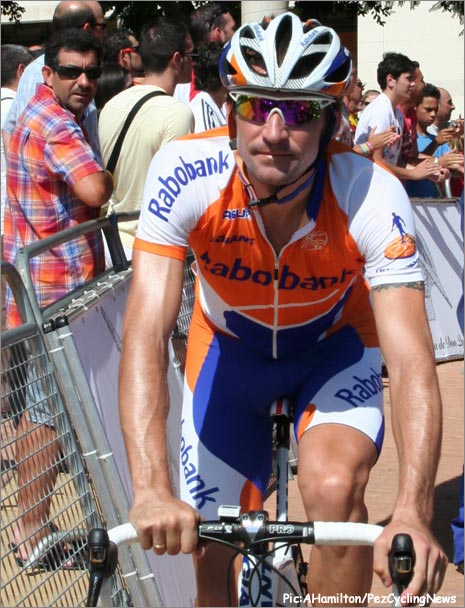 Denis Menchov will be riding his last Vuelta for Rabobank and wanting his third win. 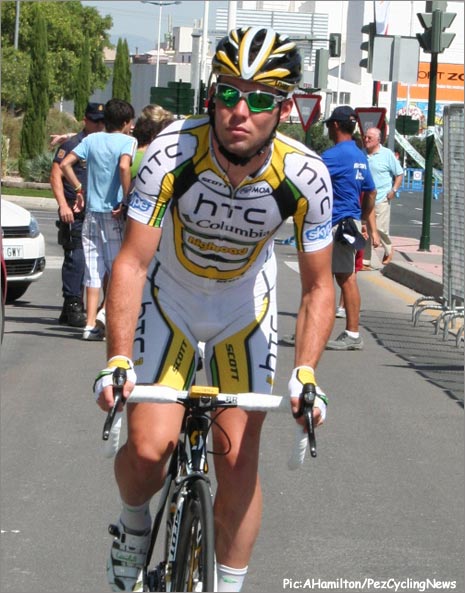 Mark Cavendish will want to hang on today for the sprint as the finish will be fast. 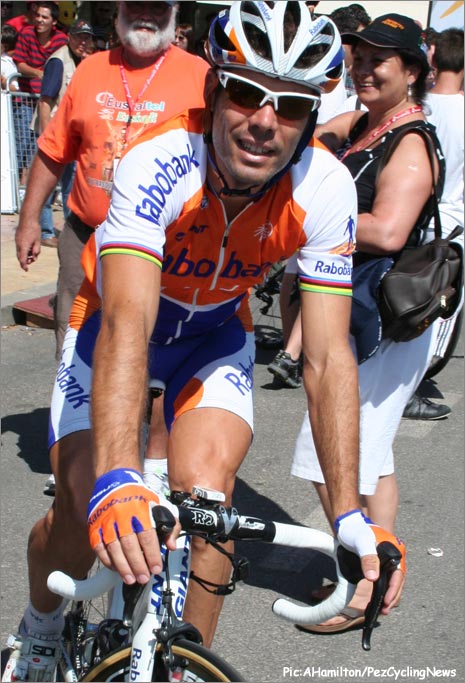 Today could also suit Oscar Freire as he says his strength is coming back. 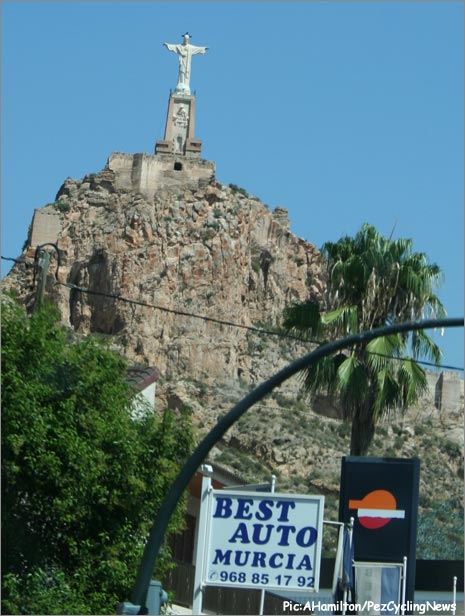 I drove out of Murcia on the course in front of the race, which was great going up one-way streets the wrong way etc. but then the local police seemed to still be trying to get the normal traffic out the way, so we had a bread delivery truck amongst the race forward convoy for a while as we passed the enormous cross on the outskirts of town. 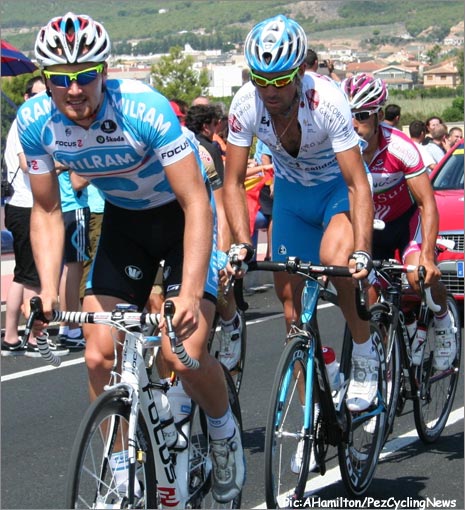 A break of four had gone from the gun and had over ten minutes by my first stop and the bunch were not that interested…yet! I managed to get off the course for a short cut up to the only climb of the day on the Hondфn de los Frailes. Not a big climb. But 500 metres of fairly steep climbing, it could shake out the sprinters, but they should get back on before the finish in Orihuela. 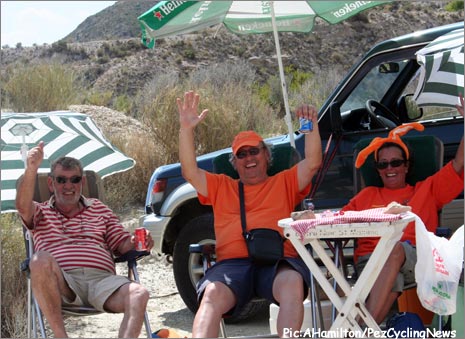 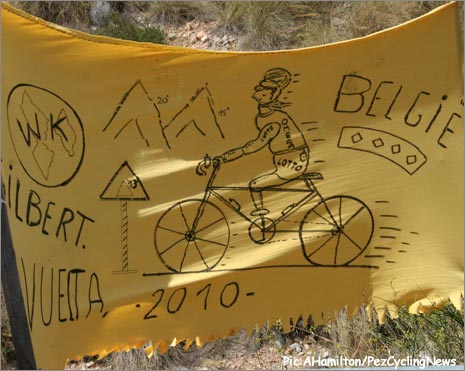 As always there were the mad Dutch and Belgians out to cheer on their men, or just about anyone. 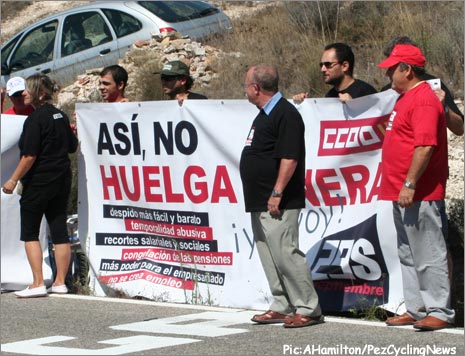 There is to be a general strike in Spain on the 29th of September and the union men were out to get some publicity. 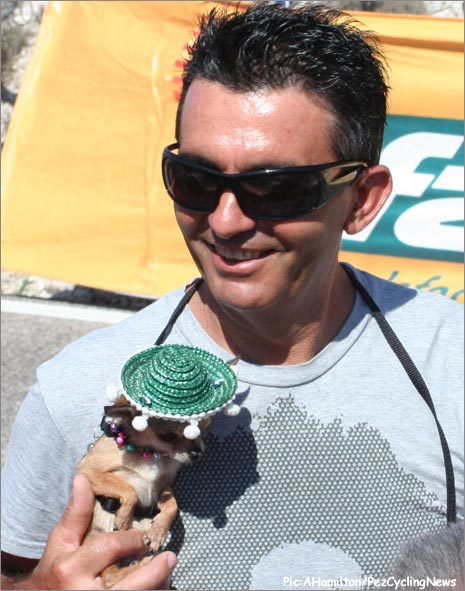 A Chiwawa with a miniature sombrero was being carried around; there are a few South American riders here, but no Mexicans for it to support! 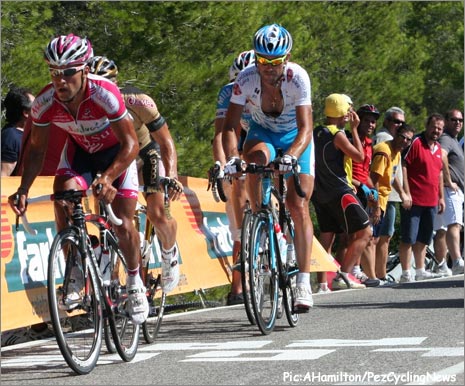 The break of four was trying hard, but the gap had come back to under five minutes and it was just a matter of time before they would get caught, nice try though! 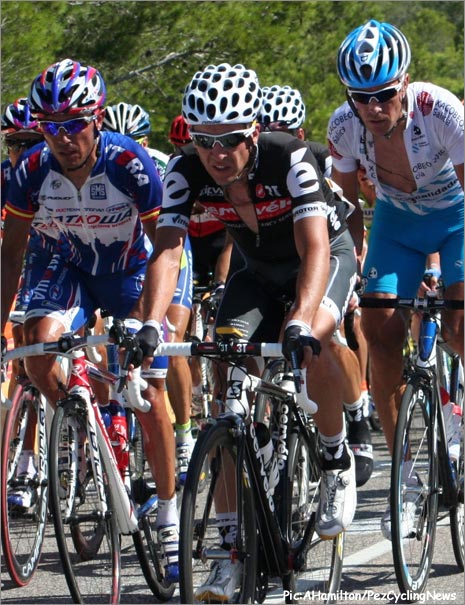 All the overall contenders were still up there, Carlos Sastre sat in the middle wasn’t even breathing hard. 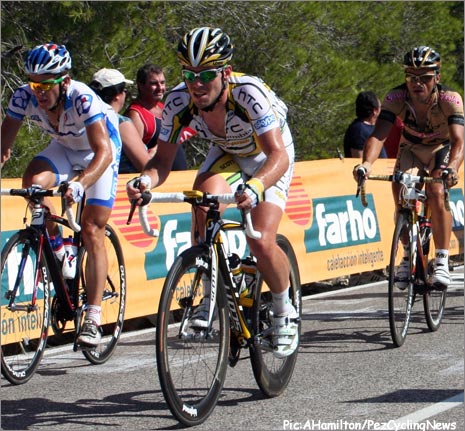 Behind; Cavendish had been distanced slightly; he would manage to get back for the sprint. 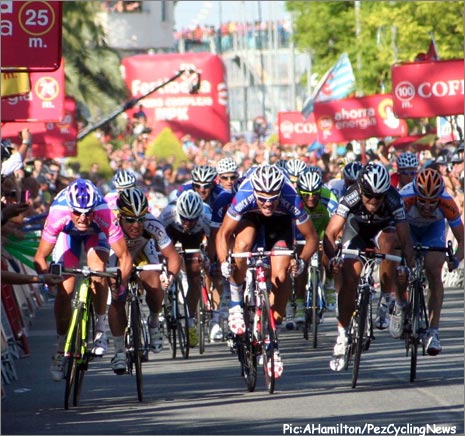 After a hectic chase back down to the finish in Orihuela it was time for the big sprint, all of the fast men were in the heaving peloton. Cav was in the middle, but on his right was Ale-Jet and he was flying. 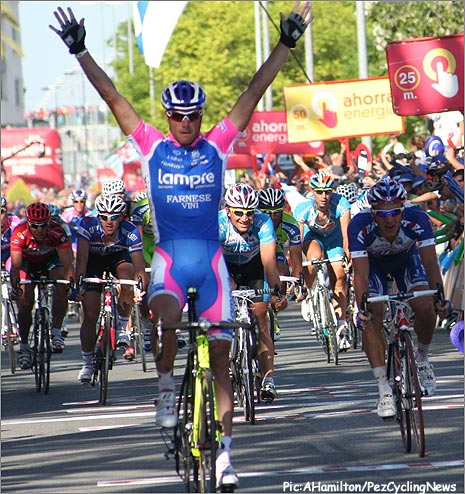 Petacchi took his Vuelta stage win in front of all the fast men and had a big smile on his face, for a change, but it was a very good win though. 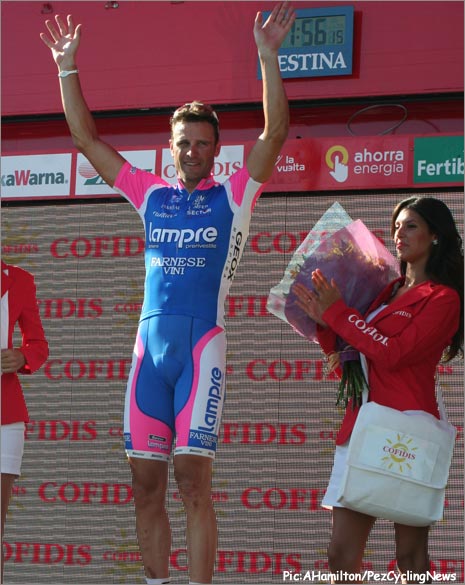 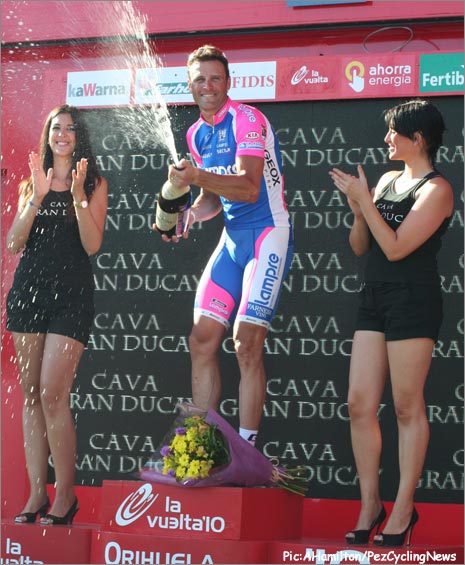 After his flowers and champagne he was given a special prize by the ex-sprinter turned climber; Laurent Jalabert, who still looks fit due to his tri-athloning. 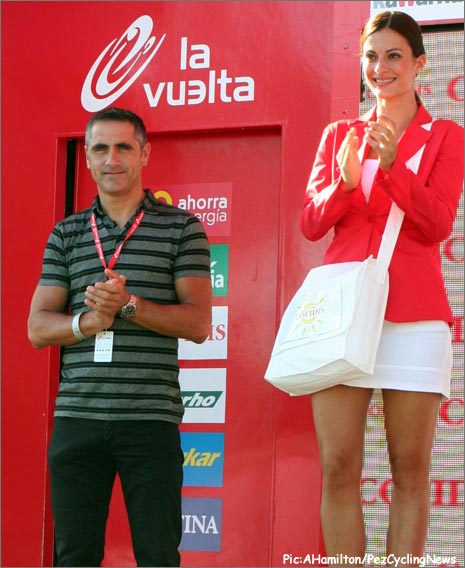 If you have read any of my previous “Vuelta De Pez” articles you might remember I had been having a little stomach trouble which I thought maybe the same as the Team Sky thing. For sure it isn’t, today Txema Gonzбlez, one of the masseurs for Sky, passed away due to a bacterial infection, he also was suffering from the mystery bug that the others in the team have had. Tomorrow there will be a minute of silence at the start. Our condolences to his family and friends. 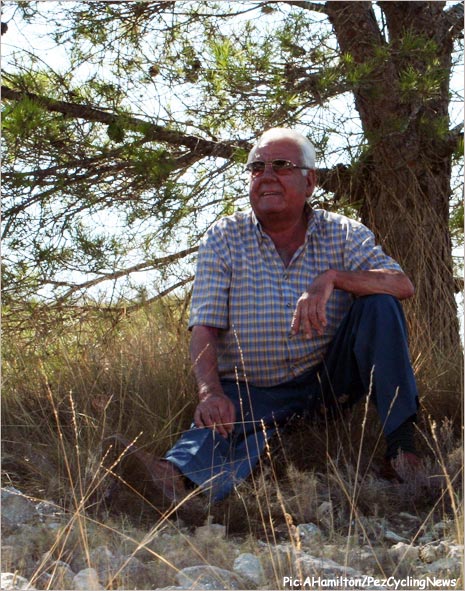 On a happier note I spotted this old man under a tree, he had been waiting for hours for the race to pass, but then that’s what it’s all about, isn’t it?