Roadside Pez: The Vuelta starts on Saturday, so our man in Spain Al Hamilton has shot down there to see what a nocturne team time trial looks like. The weather is hot, we hope the racing will be hot and we expect those Daily Distractions will be very HOT!

When I left my house on the east coast of Spain, in the Alicante region, at around 9:30 am this morning, the temperature was around 30єC, hot but not uncomfortable, especially in a car with air-con, so I wasn’t too worried about the 650 kilometre drive south. 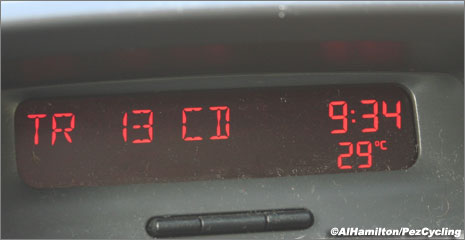 Once I was on the auto-pista pointing south, my GPS told me that the next junction was in 285 kilometres, so I didn’t have much to think about for the next two hours or so. My journey took me through Murcia region, which is a barren waste land of a place, unfortunately, the most noted part the drive here was the sun reflecting off the glass and chrome of the El Pozo abattoir and pork produce factory creating a rather, shall we say, ‘tangy’ scent.

OK, I do have a problem with Murcia, every time I have followed stages of La Vuelta a Espaсa through here, the rough roads have caused damage to my car. Two tyres, the suspension and last year an engine mount due to those harsh roads; it’s not such a bad place if you fancy fixing your car after each visit. 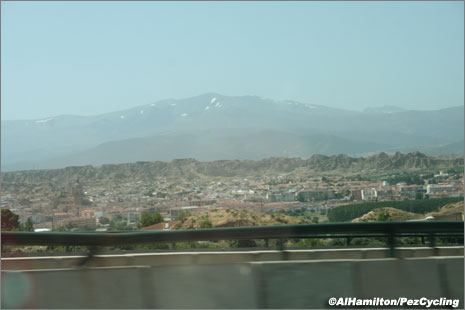 I was happy to get into Andalucнa, it’s the biggest region of Spain and probably the poorest, but it must have the most diverse countryside. As I passed the Sierra Nevada there was still a fair amount of snow up there. I remember the 2000 MTB worlds when it snowed in August! Down on the coast it will be hot and the beaches will be packed and then where I’m headed for La Vuelta they say it will be 48єC and getting hotter for the weekend. 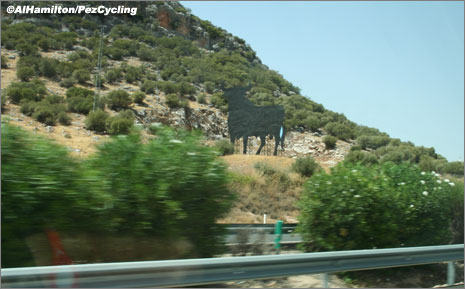 The inevitable bull was spotted at the road side, but it is dry here and the lines of olive trees and vines do try to hypnotise you as you drive along. Got to stay awake, only 400 more kilometres to go.

The overhead signs tell us there’s a 4 point driving prosecution for throwing cigarette ends out of your window, I also saw a grass fire at the side of the road, so… 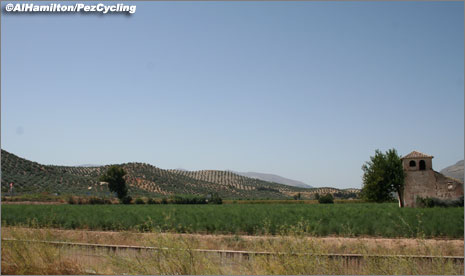 Eventually after six and a half hours driving and only one mishap; spilling most of a 1 litre carton of multi-fruit juice over my crotch, all was OK. I arrived at the Hotel Barcelу where the “Sala de Prensa” is housed and received our official accreditation. Same problem as last year, the car stickers go on the outside, so I burn my fingers on the glass, and probably someone will steal them, which also happened last year, yes in Murcia. 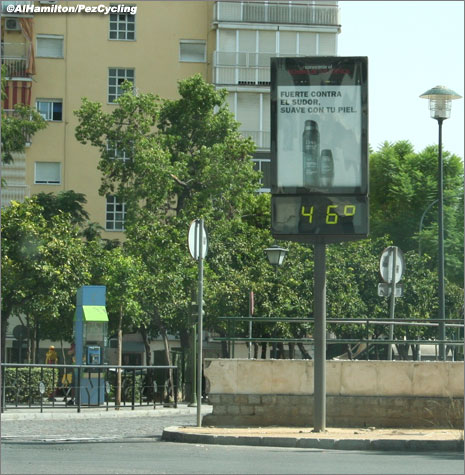 As you might have guessed it was hot, it was meant to be 48єC, but the car thought it was 42 and the road sign said 46 (that’s 114.8 F degrees for you still on the Imperial system), so a bit more than warm. The good news is that my hotel is walking distance from the team’s presentation and the start and finish for tomorrow. Bad news is that there is meter parking and the police are quite keen, well we will see about that tomorrow.

If you are ever in Sevilla, book into the Hotel Adriano, friendly staff, great room, air-con, Wi-Fi, cheep and next to all the tourist stuff like the Cathedral etc. Round the corner you can hire a bike or go for a ride in a horse drawn coach. 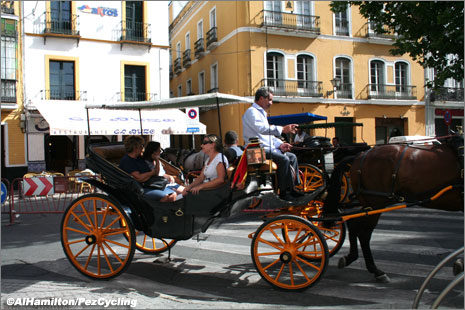 Tonight is the teams presentation followed by cocktails at the Cruzcampo brewery, the bus takes us there and returns at 24:00 and 24:30, but not sure if it brings me back to anywhere near where I’m staying, but, well it will be an adventure. I’ll tell you all about it tomorrow. 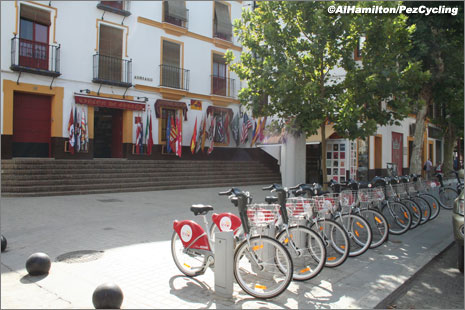 The only bit of possible bad news is that there is a Scottish Bar across the road from the hotel, I didn’t move from Scotland to Spain to go to a Scottish Pub, but maybe it needs investigation?

Alastair Hamilton is on assignment, covering his 9th Vuelta for PEZ. Long time PEZ-fans will remember how Al ventured into the deep end to cover our foist ever Grand Tour, armed only with a point & shoot digital camera and his Scottish where-with-all, and sent back the first images of Spanish publicity girls – the first ever Daily Distractions, and setting our course to destiny.