Roadside Pez St. 8: Everyone said that the real La Vuelta started today and they were not wrong. Three climbs close together near the end would sort a few things out, but it was an early break that made the news with Mountain Man Moncoutie leading the charge.

I originally thought of going to the start in Villena, but then I had been to the start yesterday and will go to Calpe for tomorrows, so I didn’t have to leave too early to get to the 2nd Cat climb of the Puerto de Tudons. This is the same Tudons they will be climbing tomorrow, but on a different road, this one is slightly easier, but is followed by three hard assents, the last one being the summit finish to the Xorret del Cati. 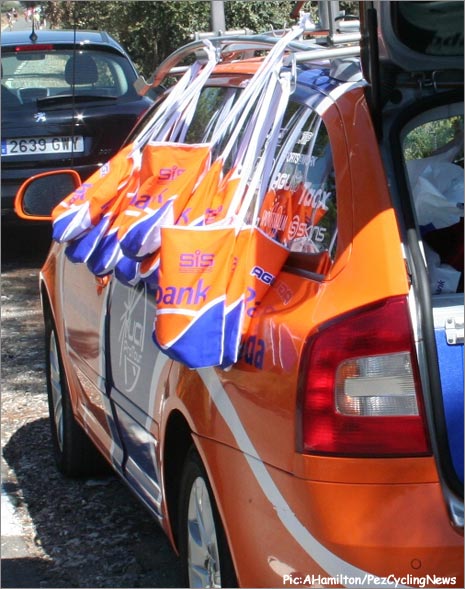 It’s an easy drive from my house to the Tudons, I expected more traffic and bike riders, but then I was two hours early. At the top of the Tudons, just after the mountain GP there is the “feed zone” just outside the gates of a Safari Park and as I started to write this, cars appeared from every direction, one family had the folding picnic table, then I noticed that the Milram masseurs had a better one…they were ready! 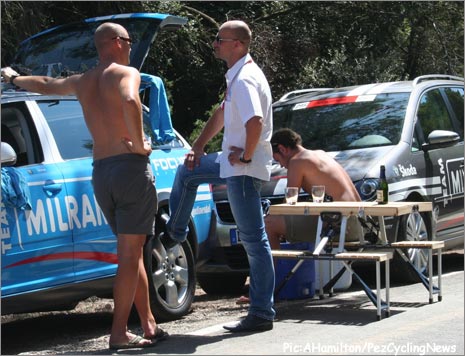 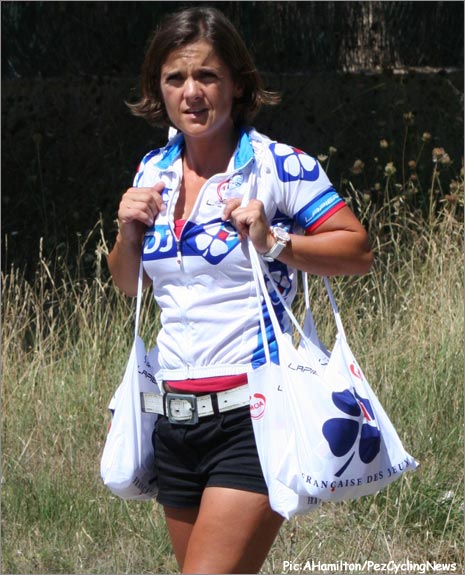 The masseurs got themselves ready for the action with two or three masseurs per team spread out down the road in case anyone gets missed out. I think every year there are more women masseurs, which isn’t a bad thing!

The beak came through with Moncoutie of Cofidis pressing on and the others grabbing their mussettes as best they could. Then the main peloton ambled through in a big group, the Tudons had not lost anyone. 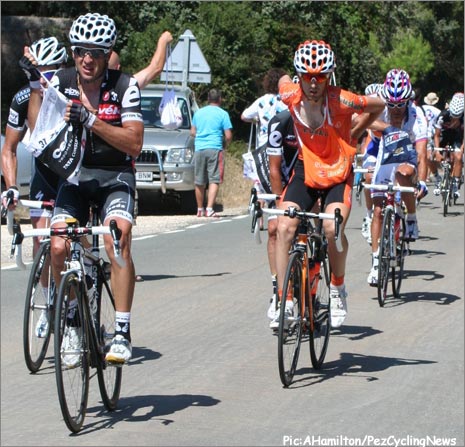 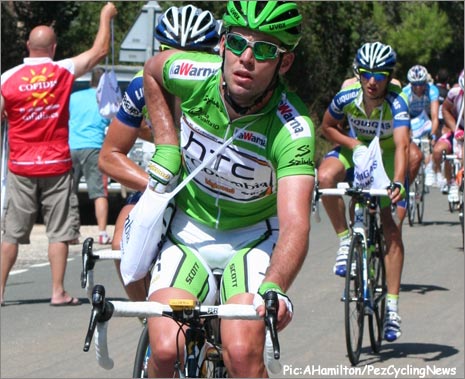 Point’s leader Mark Cavendish was still there so the climb couldn’t have been too brutal.

When they had all gone through I jumped in amongst the masseurs cars to get to the summit finish of the Xorret del Cati, just outside the town of Castilla. We made it in good time, but all the cars wanted something from the petrol station in the town; for me coke and water, lots of it, the temperatures had crept up again into 30’s centigrade. The problem was that this allowed the publicity caravan to get in front before the climb.

The giant Festina watch got stuck and had to be pushed aside, then the large advert for the Lope film couldn’t move and the smell of burning clutches was choking the air. Add to this the thousands of fans walking or trying to cycle up the hill and you had standstill for vehicles and confusion all round, with shouting, whistling policemen thrown in for good measure. 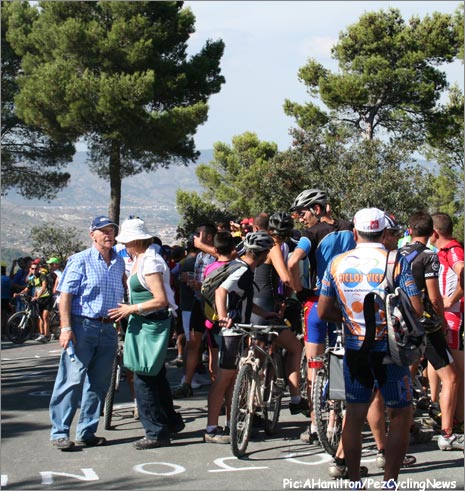 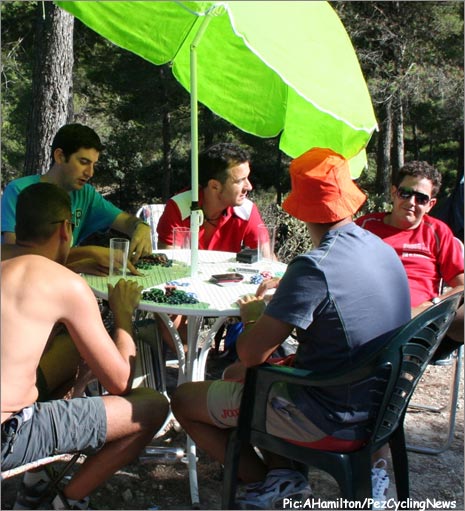 Just below the guys playing cards for big stakes there was a hamburger, hotdog, cafe/bar that was doing a great trade. It just needed some cyclists to appear, we didn’t need to wait that long for David Moncoutie to come battling up the hill. 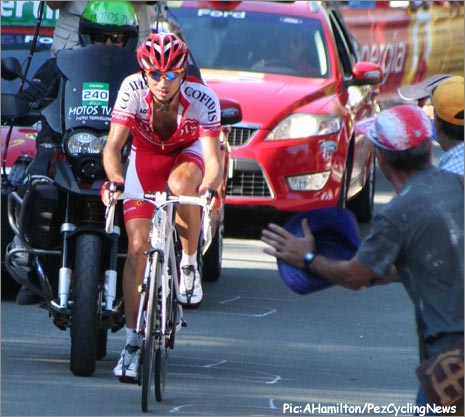 He had gone away early in the stage to build up mountains jersey point, but this was a dangerous move for the overall and the gap had to come down from its near 10 minute advantage. 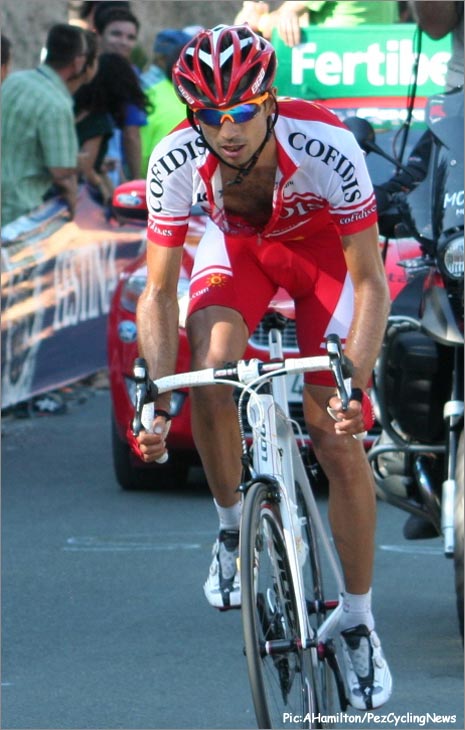 The chase group came flying up after the dregs of the break away. Vincenzo Nibali was putting the pressure on and you could see it in the faces of Igor Anton and Joaquin Rodriguez on his wheel. 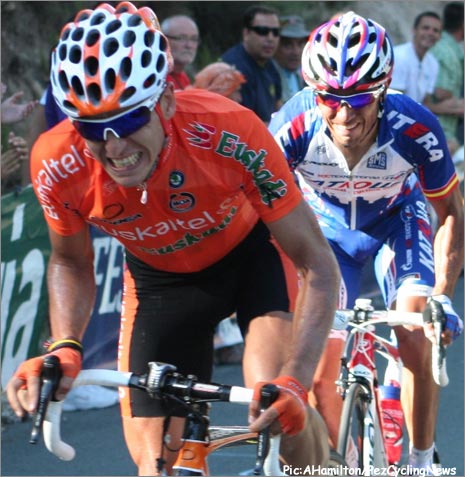 After that I lost the place of who was in front of who, as the race had exploded like a plane crash. 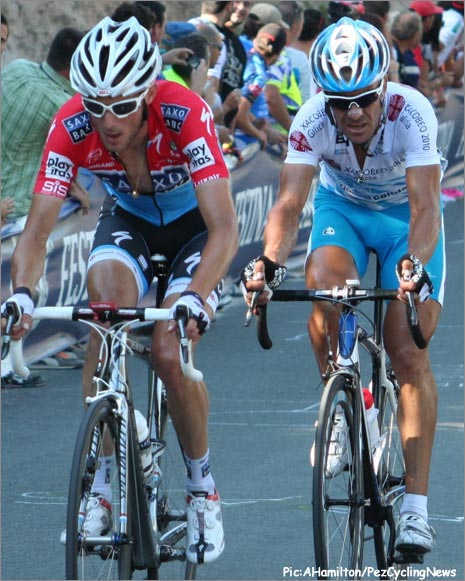 Frank Schleck wasn’t too far back. 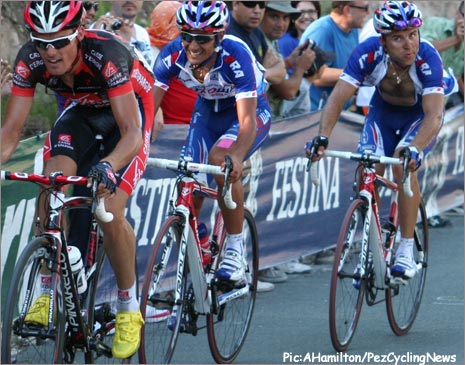 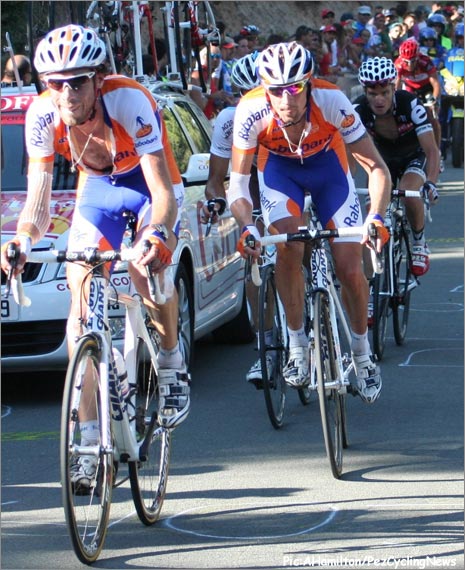 Denis Menchov was not on a good day, but had a team mate to help. 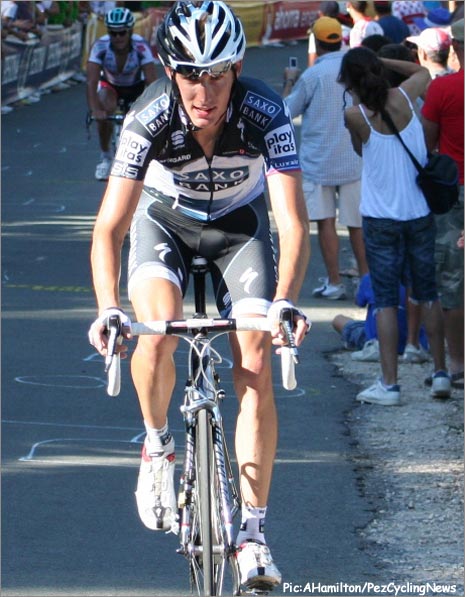 Andy Schleck had crashed near the bottom of the climb and was trying move back up, but not looking too happy. 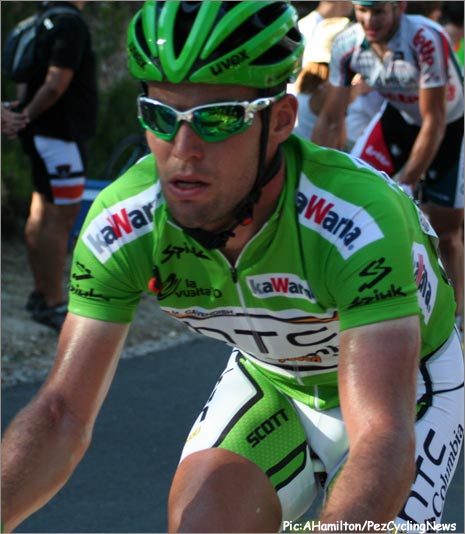 In the sprinters group Cav was riding well, Hushovd was nearer the front, but that seems to be the norm these days. I missed the red jersey of Philippe Gilbert, but he held onto my car on the way down the hill, which took me a lot longer to descend than the riders took to climb it.

A great stage and a new leader, tomorrow should be a belter with much more of that climbing stuff on the menu!