Roadside Pez: It’s still hot here in Sevilla, but at least things are starting to look like a bike race, with bike riders, famous ex-riders, podium girls and even one or two bikes! The presentation had to take place, but I think it was just a warm-up for the visit to the Brewery. 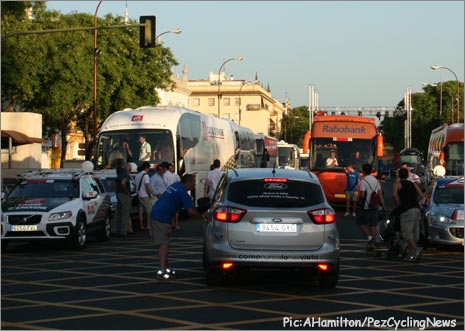 Team presentations… I don’t think the riders like them much, especially at mid-night in an unbelievably high temperature. In the afternoon the temperature was between 42єC and 46єC, as the sun went down you would expect the heat to go out of the day, but then this breeze picked up which must have been coming up from the Sahara desert, it was not nice. Some of the riders were happier to sit in their cool team busses until the last minute and then shoot up onto the stage. 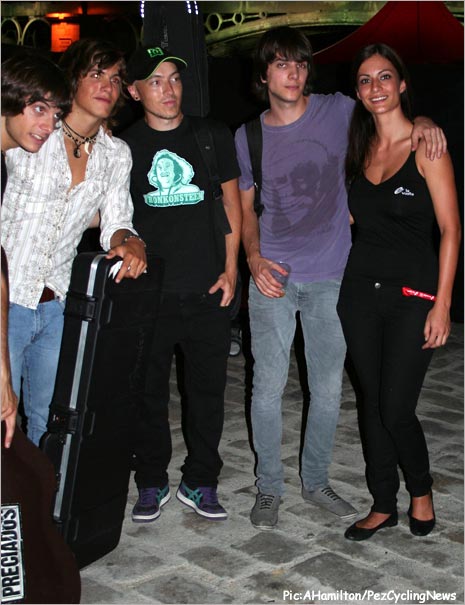 The presentation was very much for the TV, so it was a little disjointed with long gaps of nothing, luckily the band (Preciados) who are playing this year’s Vuelta song would step up to entertain the audience, mind you when you’ve heard the same song three times its probably enough! 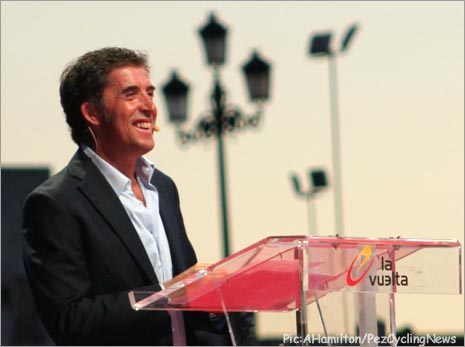 Perico Delgado was handling it well and keeping it cool, a few years ago in Malaga it all went wrong and Race Director Abraham Olano was close to melt down, but this year he had time to have a chat with old friends and even have a good look at some bikes. 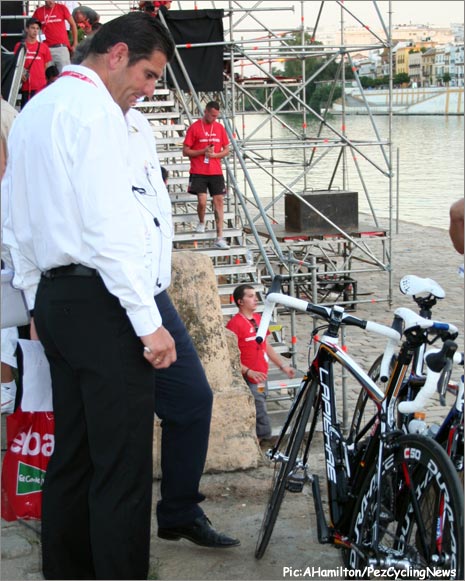 The TV was busy recording stuff for later; Luis Leуn Sбnchez is a big hope for Caisse d’Epargne, who will want to show well for the new sponsors Movistar. 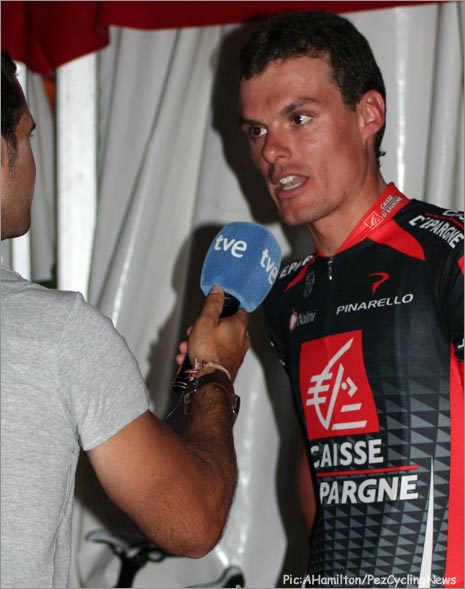 Local TV had a rather nice interviewer who only wanted to interview the local riders from the Andalucia-Cajasur team, all the stars had their turn in front of the camera, but the quotes were as you would expect. 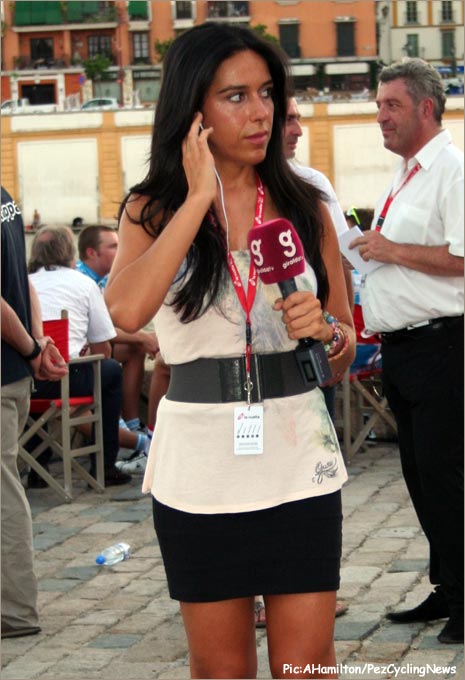 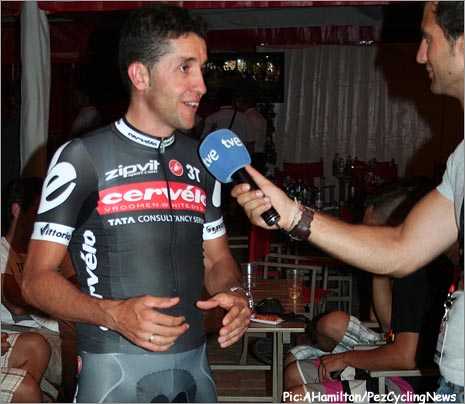 Saxo Bank’s Fabian Cancellara was sat on a wall with the Guadalquivir river behind him, a peaceful moment, but then he had no choice as things had come to a standstill again. His tranquillity was not to last long as he was soon asked for photos with fans and their children. 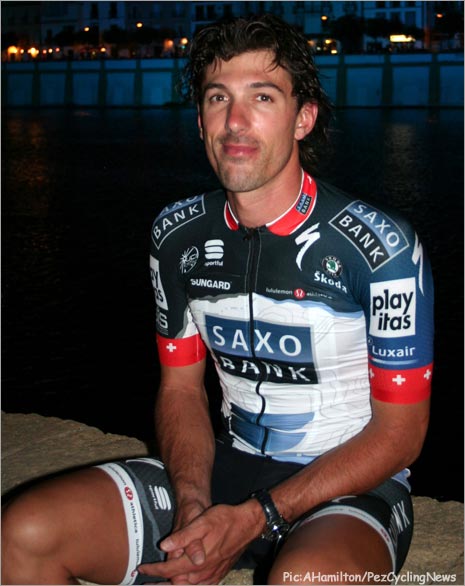 If you have not been following Fabian on Twitter then you won’t have read his continual comments on the weather here in Sevilla, his last one “It is even hotter than the other days. The boys try to be protected from the sun in the shadow. Training comes” with a photo of the team under a tree. 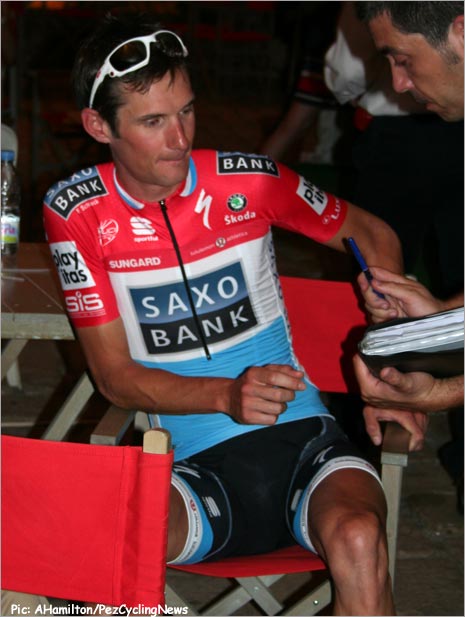 Once Saxo Bank got up on the stage, Andy Schleck was asked if he had recovered from his second place at the Tour de France, he commented that he was well and ready to help his brother Frank to win this Vuelta, the usual comment of the team being strong made you wonder which team he was talking about; Saxo Bank or the new Luxembourg team as most of the riders here are going with the Schlecks. 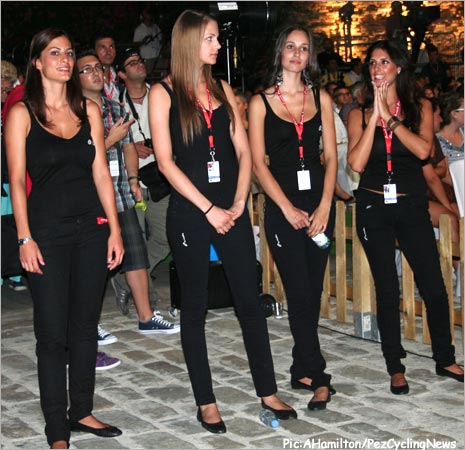 The teams were starting to go through the routine of going up to the stage, waving and then going home, unless they had a Spanish rider then there would be an interview. 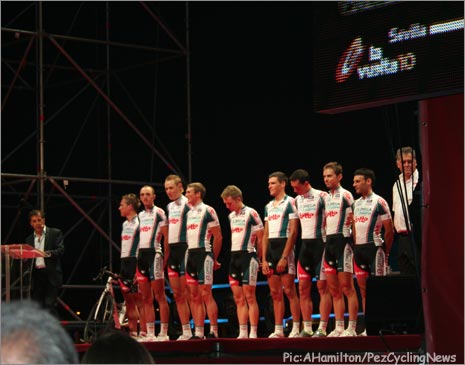 At 10 o’clock everything stopped again, no idea why, this left HTC’s Mark Cavendish sat on the top step waiting for his turn, this pleased his band of fans on the far wall. 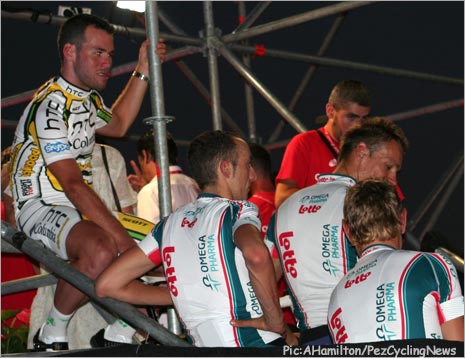 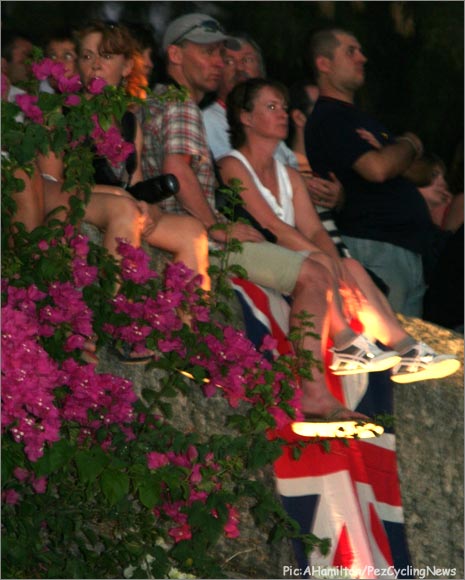 Before you ask, yes there were some bikes at the team presentation, but tonight was not about the bike! 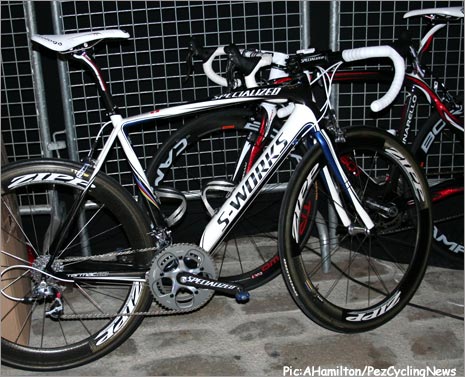 The presentation finished late, it should have been 10 pm but it was nearly 11 by the time we were herded on to busses to go for “cocktails” at the Cruzcampo brewery. Cocktails didn’t mean cocktail drinks, but small eats and this being a brewery there was as much beer as you wanted. 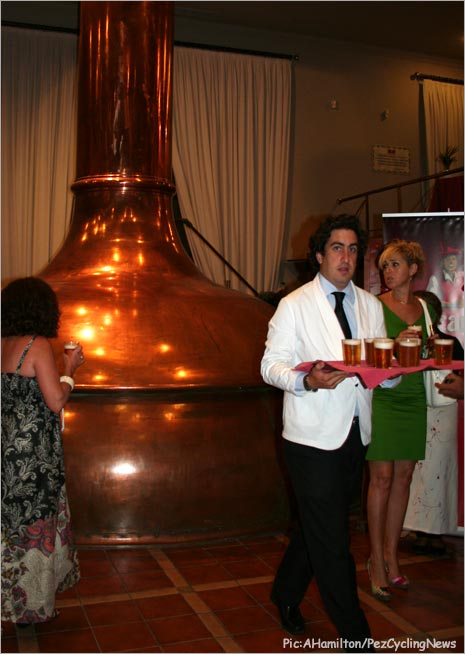 So, I had my first beer for 5 years and it was rather nice, I had to have another, but you need something to wash down the nibbles…and there were lots of them. 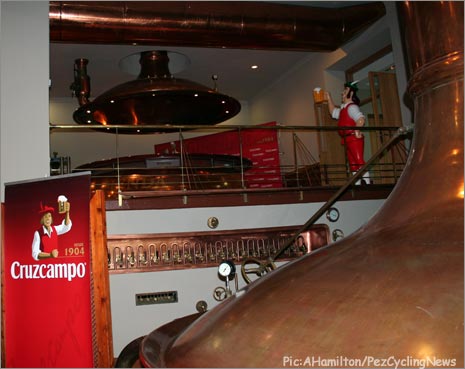 Little canopes, small bits of tortilla and bits of cheese, then the more interesting stuff came out, sausages in pesto, little fried balls of many different fillings; I think I counted ten different fillings from jamon Serrano to prawns and mushrooms, all nice and in the end quite filling. 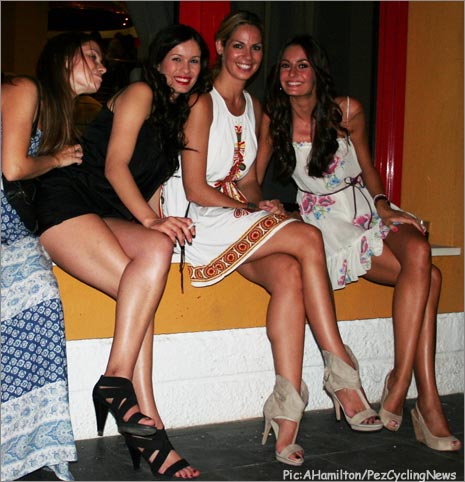 My main entertainment was watching the podium girls, obviously they are kind on the eye, but there is something very interesting watching them wrestle with the idea of eating fried food and drinking beer, but scared to do it in case they put on an ounce or two, cruel, but fun. I think it’s why they smoke!

When I got back to the hotel it was 1:30am and the temperature was still 35єC, this probably explains why the start and finish areas were being set-up at this time as the weather forecast for tomorrow is predicting 50єC… hard to race in that’s for sure!

Vuelta’10 St.1: A Hot Night Of Racing In Sevilla