Vuelta De PEZ: At The Start In Gijon

Roadside PEZ: The sun splits the sky and the Vuelta’s 17th visit to Lagos de Covadonga is for the reference books. Ed and Martin’s short trip to Spain ended yesterday morning with a quick trip to the stage start in Gijon – read on!

By Ed Hood and Martin Williamson 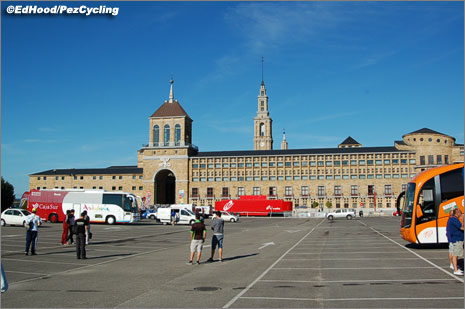 Our flying visit to the 2010 Vuelta ends today; but there’s time to go to the stage start at Gijon University and see what some of the key men of the race have to say. 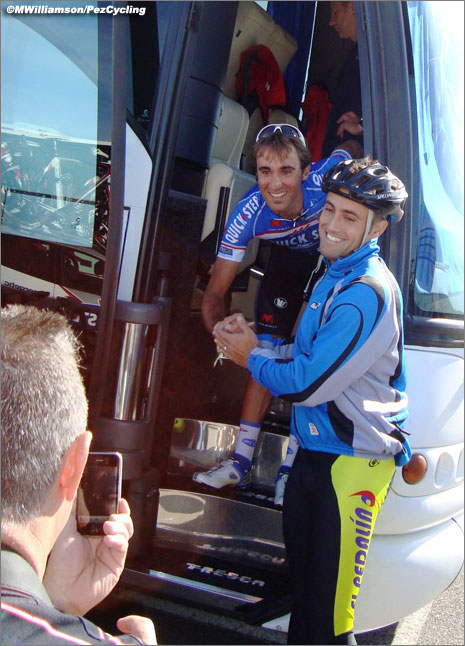 Our first port of call was the QuickStep bus; the correct thing to do after Barredo’s display yesterday. Former Flandrian hard man pro and now team DS Rik Van Slycke was the first we spoke to: 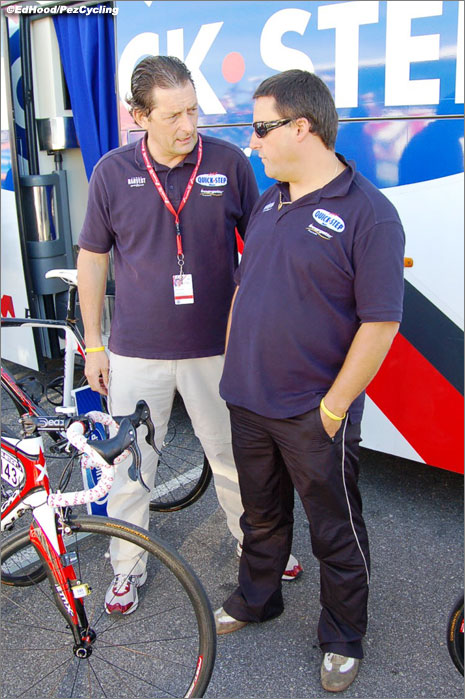 It was a very good day for us, but we we’ve tried hard in this Vuelta – this result shows we have the motivation.

It’s a double triumph – for the team and on a personal level for Carlos; he’s from Oviedo which is near Covadonga and now he lives here in Gijon.

His parents are here this morning and they were up at the finish, yesterday.
There was no big screen so they didn’t know what was happening and had to rely on Carlos’s brother phoning them to tell them what was going on.

The result also means we’ve had wins in all three Grand Tours – without a Cavendish or a Farrar that’s hard to do.

I think Nibali; he watched and waited for the Spaniards to fight it out amongst themselves before he made his move for the jersey.

But it’s natural that they would want to lead, they’re Spaniards in their national tour, we’d be the same in the Tour of Belgium. 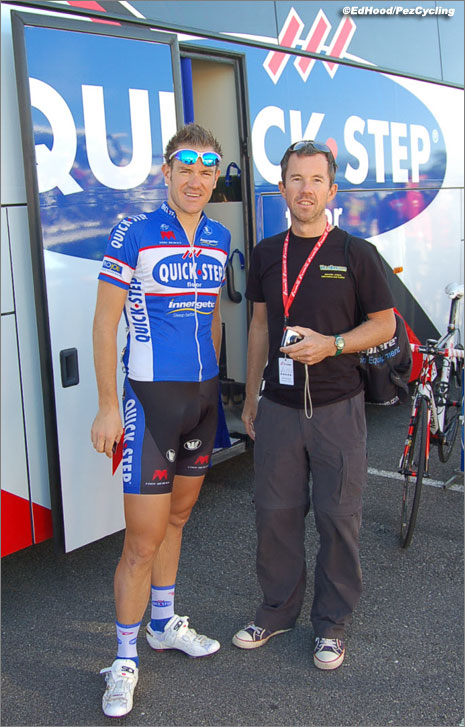 Whist we were over at QuickStep, their trendily quiffed sprinter Wouter Weylandt appeared and was duly way layed:

‘The heat in the first week didn’t bother me too much. I have a young guy who is working as my lead out rider, he’s learning, there have been a few mistakes but I’m looking to the Toledo stage as one where I can maybe do something. If I survive today, tomorrow is the rest day and then we’re nearly in Madrid.

Am I in the new Luxembourg team next year?

Milram’s Vuelta wasn’t helped by the news of Roy Sentjens ‘fessing up’ to EPO usage.

Despite DS Gert-Jan Theunisse’s scary appearance we bit the bullet and had a word with the former climbing star who still looks in very good shape – he’s actually a nice guy: 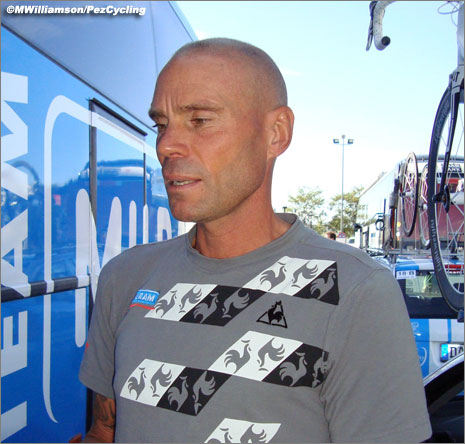 I haven’t really been away from the sport, I’ve coached and managed small mountain bike teams and the last two years I’ve been Pro Tour.

I live in Majorca and try to keep in shape, I exercise early before stages if I’m at a race and spend time on my bike when I’m at home.

We had a lot of illness and injury before this race and came into it with what you might say was a ‘B’ team so we didn’t expect too much.

But we’ve made the break most days – six or seven times; and Terpstra has been caught late in the day, twice.

It’s hard for us in the mountains so we have to try to get in the breaks on the flat stages.

But personally I prefer to watch mountain stages, they’re much more interesting than boring flat stages.

For next year we’re still looking for a sponsor, nothing is concrete but it would be great to stay part of the Pro Tour circus; I really like it. 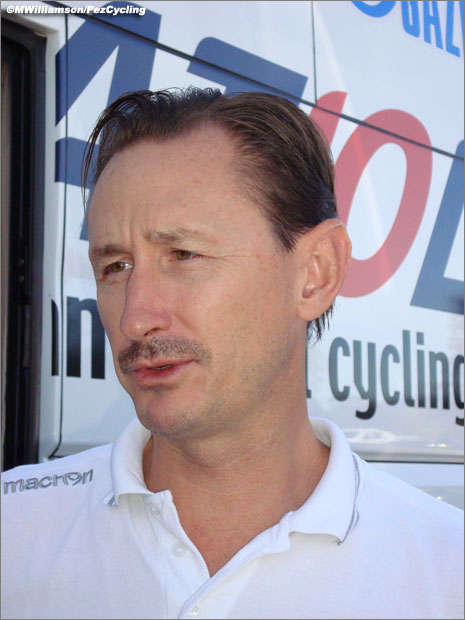 Over at Katyusha ‘Dima’ Konyshev was a tad inscrutable to start with but eventually came across with some words of wisdom:

The team and Joaquin Rodriguez have had good results all year, we can’t wait all year for the Vuelta before we try for results.

Today is a very good parcours for him, he has to take his chances in the mountains because he is so terrible in the time trials.

There are some chances for Pippo in Toledo and Madrid but I’m happy not to have a pure sprinter here to worry about; it’s enough to be thinking about the classement with Rodriguez. 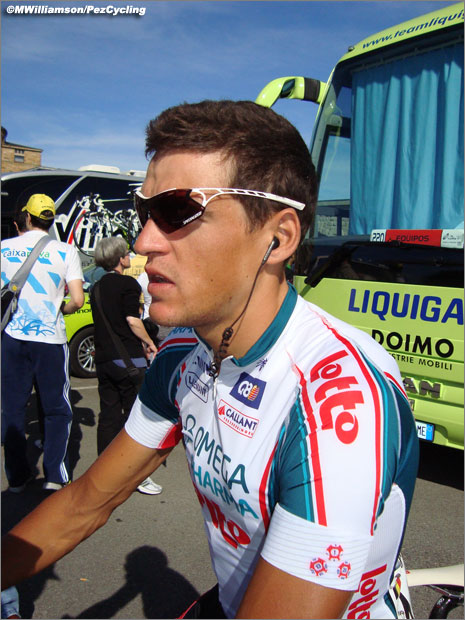 It was good opportunity for me but I couldn’t win, Barredo was the best climber in the group.

But I’ve had a third and a fourth on stages now and yesterday there were two
of us in the finale (Oliver Kaisen) and the team is pleased with how we rode – it was good TV exposure.

We don’t have a GC rider so it’s important that we are in the breaks.
We’re all very motivated to do well; we did a good job in the first week with Philippe – it’s important to start a race well.

Today I’ll be in the gruppo but think that perhaps Toledo is a good stage for me.

I’m going to the Worlds in Melbourne, it’s the first time they have been in Australia – it’s great for me to wear the national jersey and with Philippe we have a good chance. 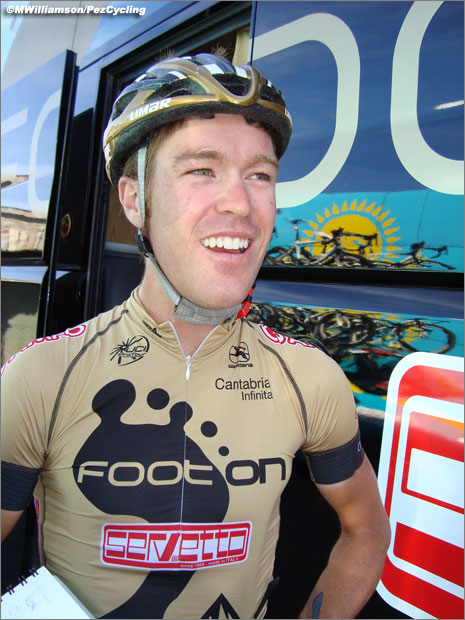 Footon Servetto’s Johnnie Walker had a different take on Covadonga:

It’d be a really nice place to live with all that peace and quiet! It’s not the finish climb that kills you, it’s the start – it was insane. It’s much tougher now to get in the break, only the best guys are getting away – the highly paid riders.

The time gaps on the steepest climbs don’t tend to be as big because you’re on such small gears; it’s the 40 kph climbs where you can lose a lot of time.

But the thing about the peloton is that it’s own worst enemy – you’re hanging on then it eases and you should be happy about that, but you think; “maybe this could be it” and you’re back trying to get off the front, again! 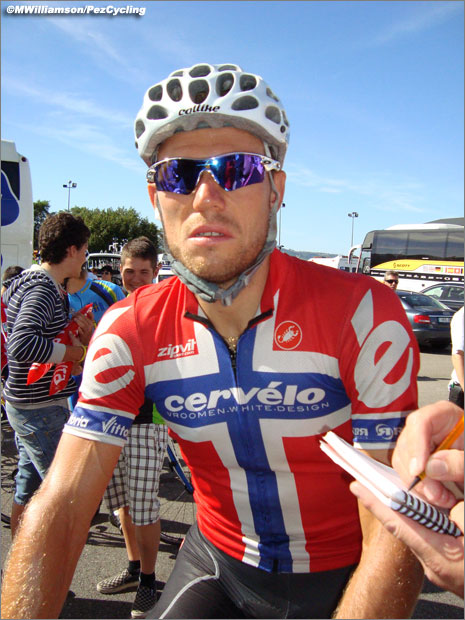 The mountain scenery is nice but the stages are very hard. I have no plans for more stage wins, I just take each day as it comes.

I’ve seen the videos, it looks hard but I’ll wait until I get there before I say too much about it. 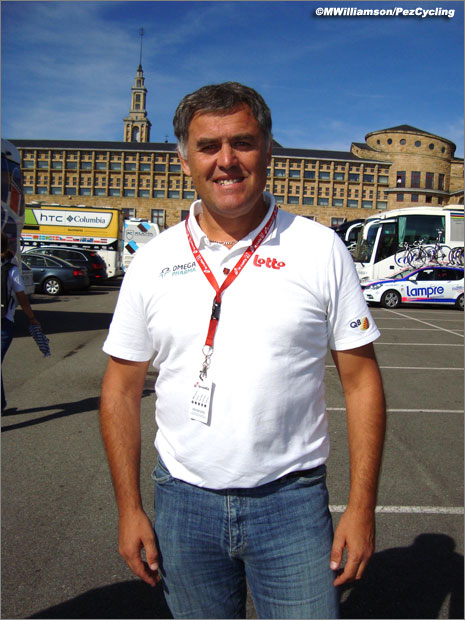 Omega Pharma-Lotto’s DS Hendrik Redant always has time for us Scots, though.

(Maybe Thor still remembers the Battle of Largs in 1263 where we beat the Vikings?)

Hendrik will be over in Bonnie Scotland for Brian Smith’s ‘Braveheart Fund’ dinner, this autumn:

It’s been a good tour for us, yesterday when that break went we had four of the original 16, you can’t get much better.

Philippe Gilbert has proved himself a real leader, he sprints, he climbs, he goes with the breaks, he grabs the jersey.

The other guys think; “shit! I have to do something!”

If you have a good leader it makes life so much easier for management if your best rider has that quality of leadership and setting the example.

I thought at the start Nibali and I still think that, they can’t drop him in the mountains and he’s a better time triallist the other climbers.
Mosquera attacked yesterday, but he only took seconds back – for me it’s Nibali.

And then it was roll out time; we hope you’ve enjoyed our snap shots of the Vuelta – we’ve enjoyed bringing you them.