Roadside PEZ: Katusha’s Vladimir Gusev points to the handlebar extension on his Ridley; “up one millimetre!” he tells the mechanic, the spanner man says nothing as he pulls the allen keys out of his pocket – but you can tell what he’s thinking. Another day, another Euro for the riders and staff on the 2010 Vuelta.

By: Ed Hood and Martin Williamson

We had actually intended to miss the start of stage 14 out of Burgos and head straight for the Lagos de Covadonga to preview it for PEZ; but last night we couldn’t convince the organisation to give us our race creds.

We’ll spare you the details but it took precious time and patience to get them, today. 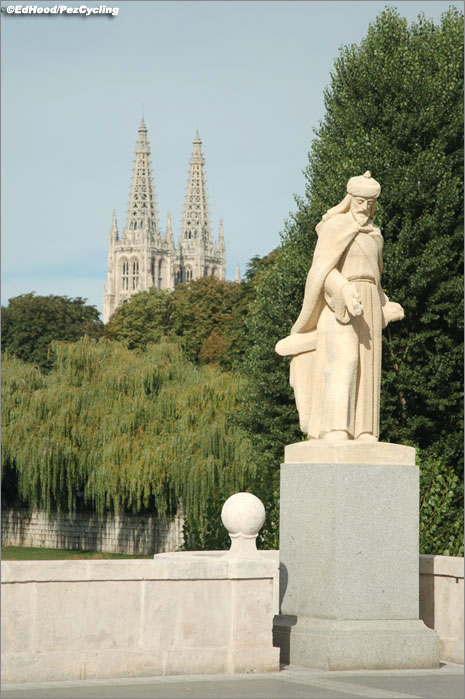 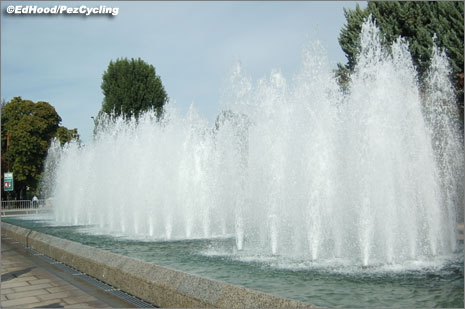 We didn’t get much chance to explore Burgos; but we liked what we saw – and the coffee was always good.

First stop was the Footon-Servetto bus where we chatted with Johnnie Walker who gave us his rest day insights t’other day. 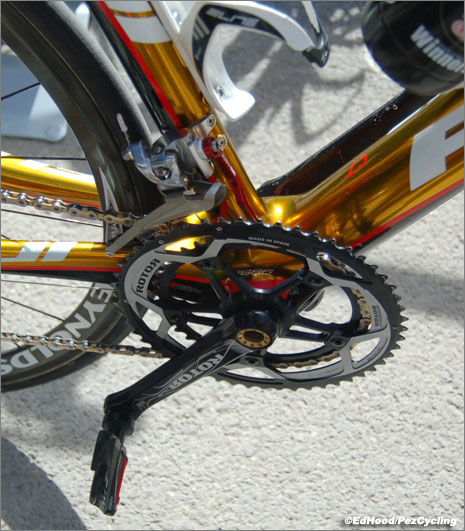 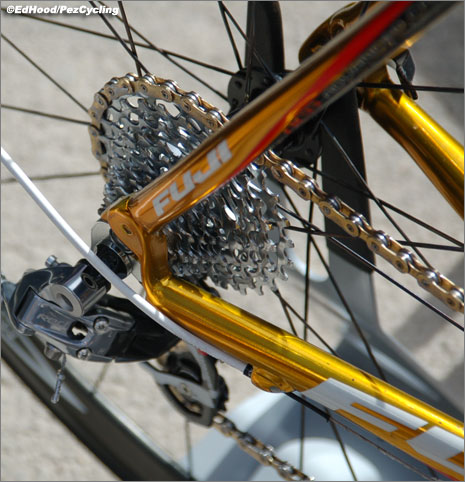 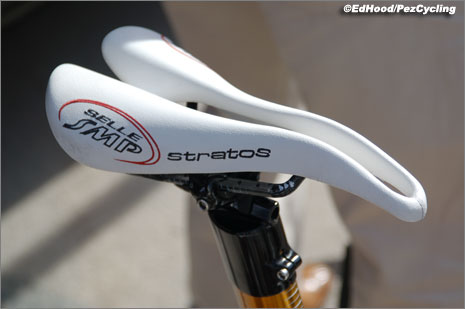 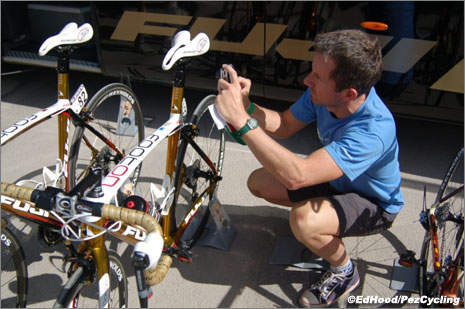 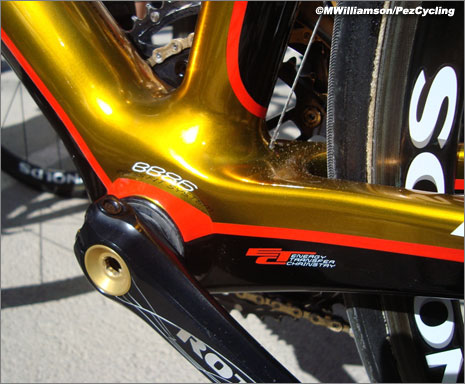 Whilst he was in the team meet; ‘the manager gets grumpy if you’re late for it!’ we checked out his Fuji.

Martin and I have decided to ‘come out’ as fans of the bikes’ colour scheme and the team kit – ahhh, I feel better now there’s that weight off us. 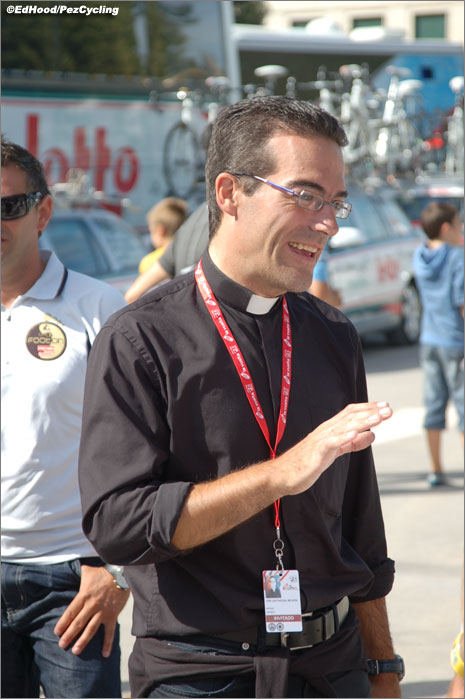 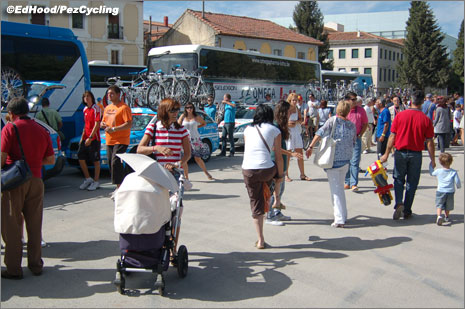 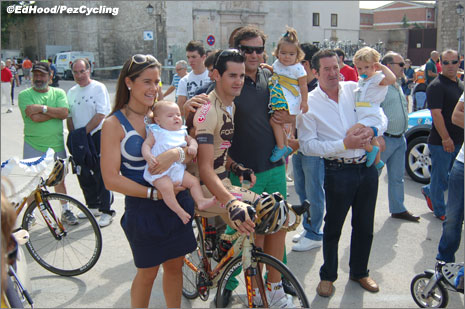 Everything at the Vuelta is more laid back than the Tour or Giro; fans mill around the bus park, prams are pushed, riders cuddled and men of the cloth are welcome on the team bus for a chat. 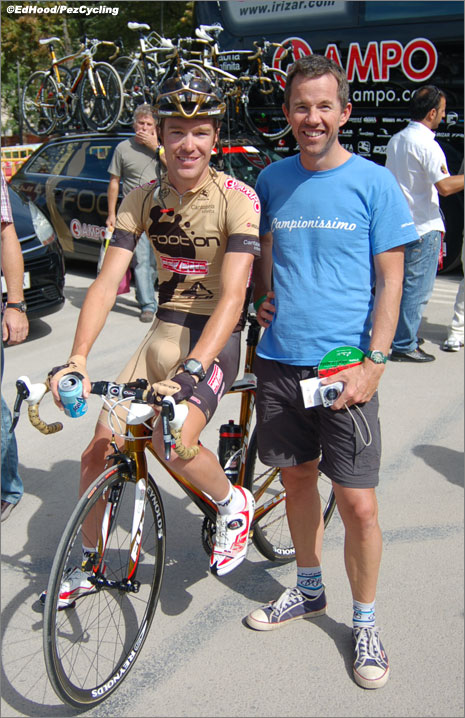 Team meet duly over, Johnnie told us that he was feeling tired, but was happy with his ride the day before where he took 10th place in the sprint after leading out Portuguese team mate and former national elite road champion, Manuel Cardoso who took fifth behind Cav. 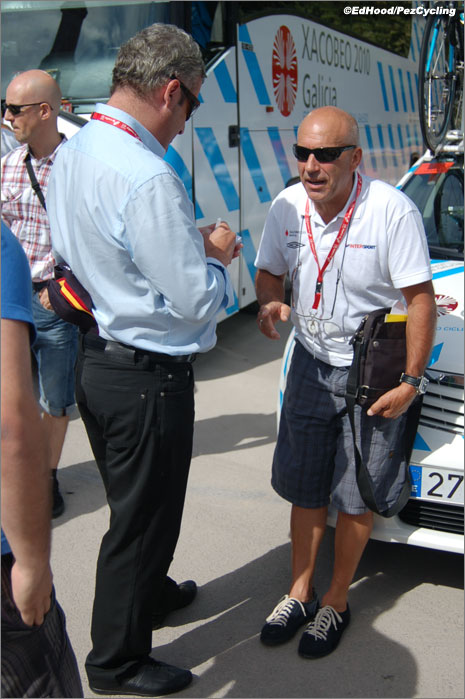 Over at Xacobeo Galicia, DS Alvaro Pino was chatting to journos about when he won the Vuelta in 1986, despite Robert Millar’s epic win at Lagos de Covadonga that year. 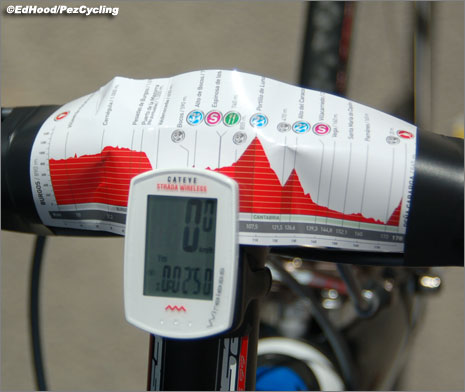 Their main man, Ezequiel Mosquera is riding a strong race and the race profile taped below his computer tells the story of a man who’s looking forward to today’s mountain top finish. 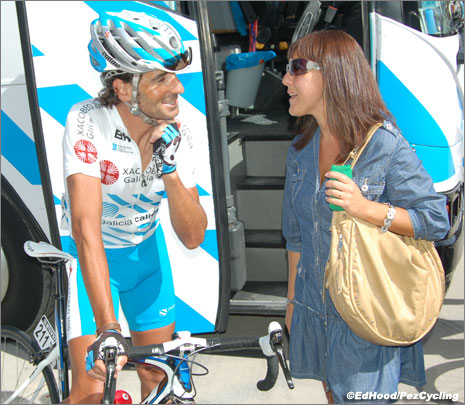 He’s also very popular with the lady fans – he’s a quiet guy, but then they’re always the worst . . . 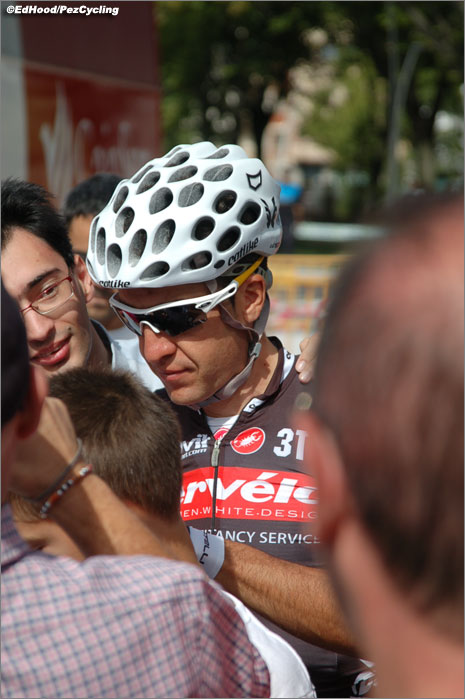 The next bus to Galicia’s was Cervelo; lack of 2010 results or not, Carlos Sastre is still popular with the fans. 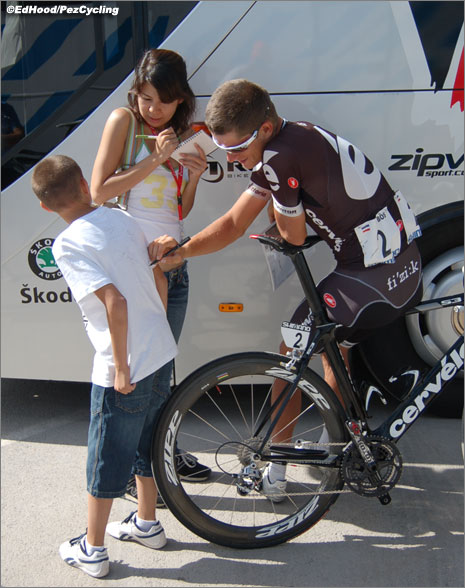 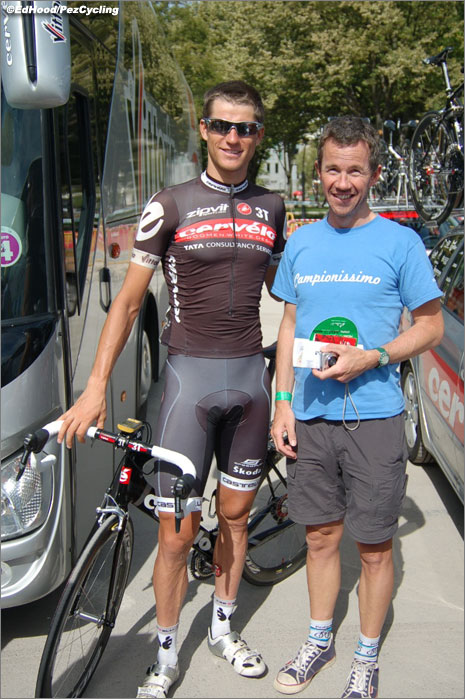 But it was Theo Bos we got the chance to chat to; ‘the heat has made it very difficult, I didn’t feel well when it was up to 44 degrees. My form is OK but not special, I’ve had two top tens but that’s against the big guys. This is the 14th stage and I’m feeling better and want to finish the race; but the last few days I wasn’t sure if I would manage to.’

And what about the demise of Cervelo?

‘It’s a shame, it was a nice team with nice ideas, the UCI regulation changes for 2011 where Pro Continental teams can’t ride as many big races didn’t help.
Rabobank approached me after the news broke and my programme with them will be much the same as it was going to be with Cervelo. I hope to ride at least one Grand Tour; we’re planning to build a lead out train for me with good, young riders – but we’ll go one step at a time.’

And will we see you back on the track for the London Olympics?

‘I want to do some track, yes. I haven’t really stopped riding the track, I rode a couple of six days, last winter. I’m going to do tests for the omnium, madison and team pursuit – events I rode before, but not at international level.’ 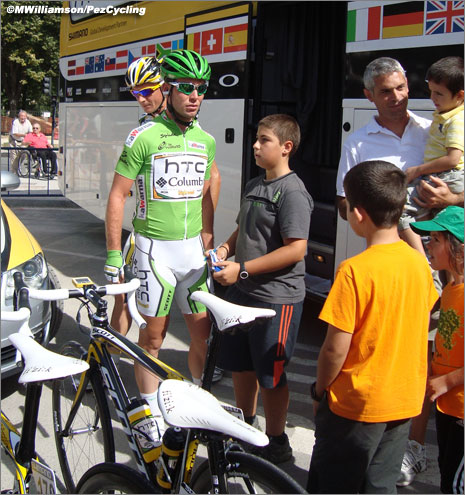 We said our ‘cheerio’ to Theo and headed over to HTC to see if we could catch a word with Cav; our timing was good, he was walking out of the bus, but his face was like thunder – not a good day for a chat, we figured. He scowled his way through a few pics with fans then pedalled off to the sign on, grim faced. 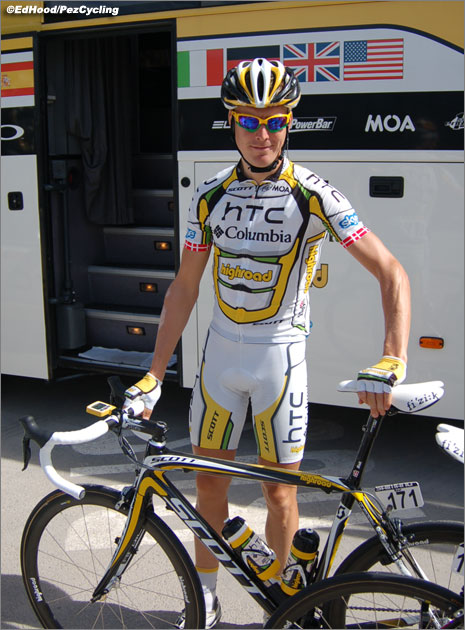 Sensing the heavy vibe, one of the team mechanics decided to lighten things up as Lars Bak stepped off the bus; ‘ladies and gentlemen, live and direct from Denmark, Mr. Lars Bak!’

Bak smiled, ‘you have to smile!’ he reassured us. 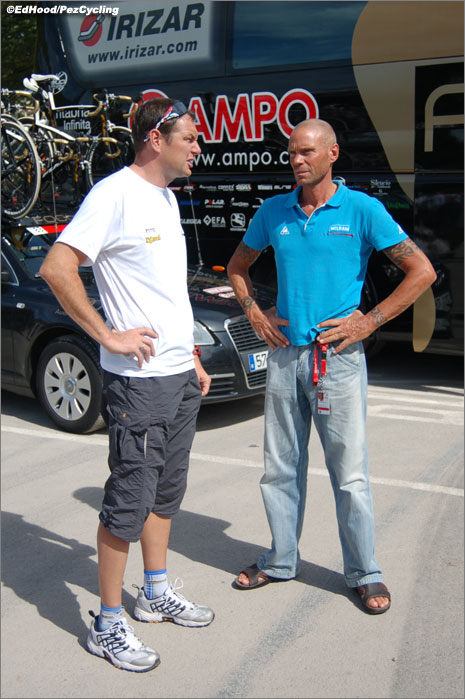 But it was back to grumpiness over at Milram where former mountain king Gert Jan Theunisse looks incredibly fit – and scary. 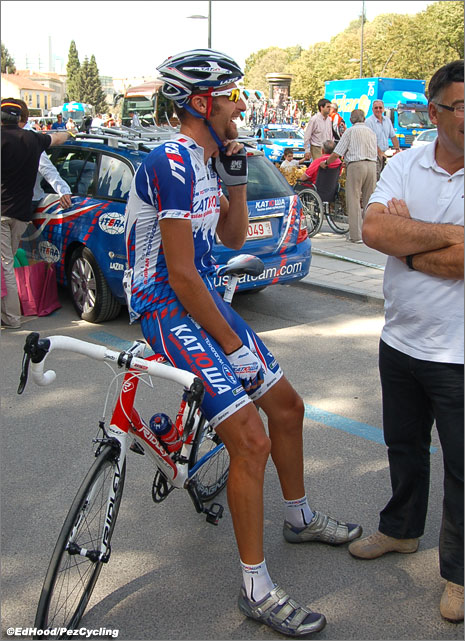 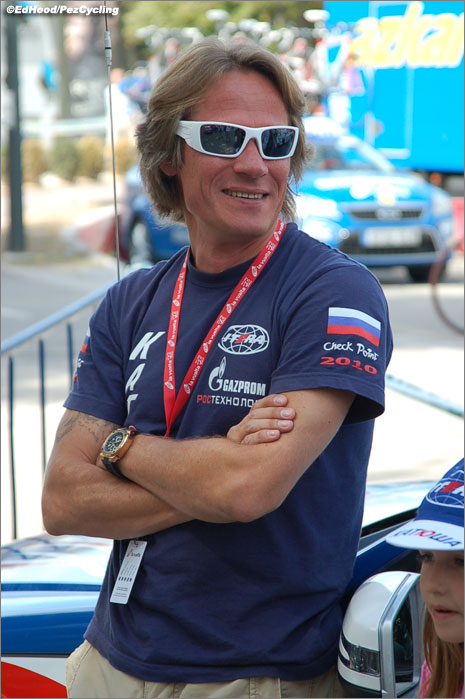 Katusha might not have had the big wins but it’s a cool squadra; Karpets has moulted a lot of hair but is still a man who spends money at the barbers, as is team official, ex-rider and Tour stage winner, Sergei Ouschakov. 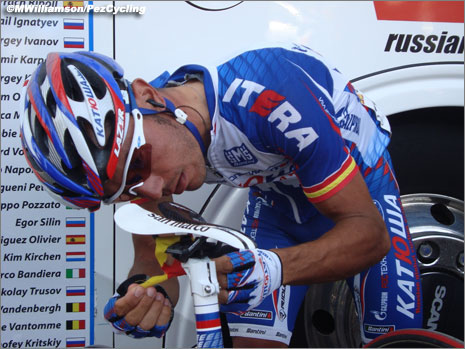 A slightly sad looking Joaquin Rodriguez – losing a leaders’ jersey does that to a man – was tying Spanish coloured ribbon under his saddle – answers as to why on a post card, please. 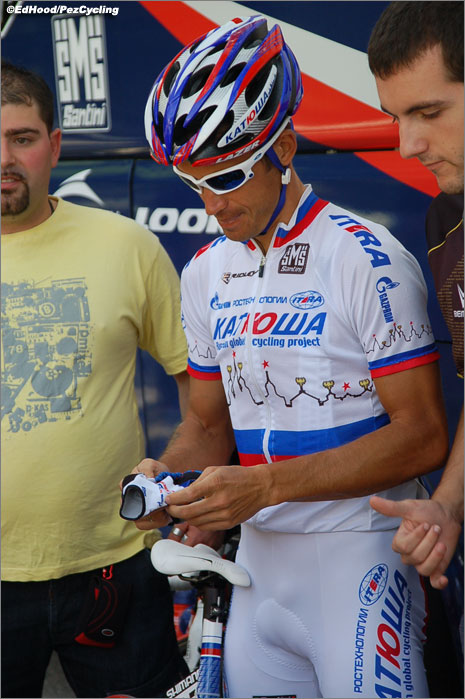 Kolobnev? He defines cool, watch for him in Melbourne. 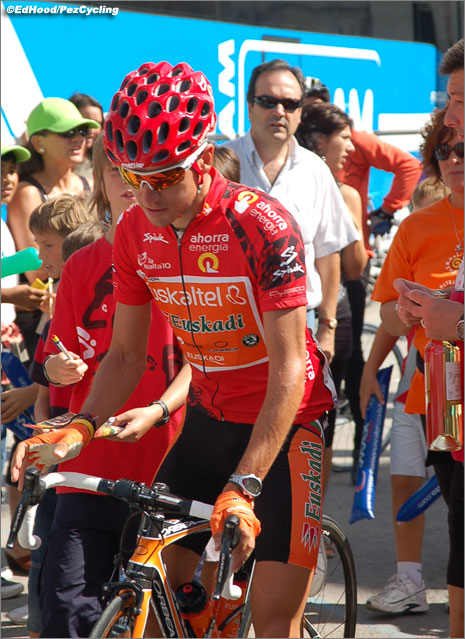 If Rodriguez was sad at losing the red leaders’ jersey, Igor Anton was positively radiant in his, over at Euskaltel. 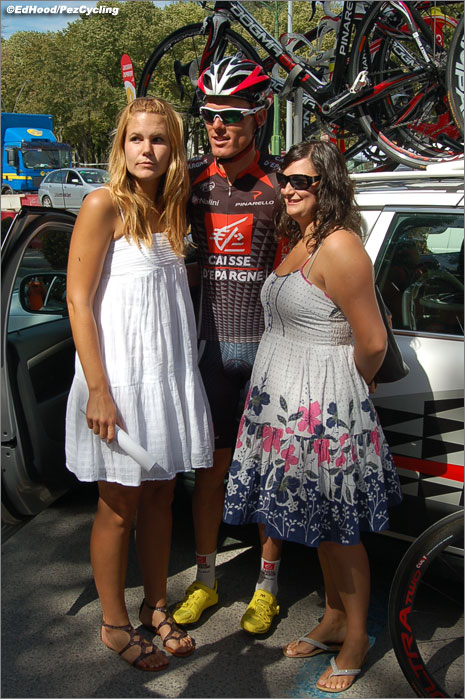 As start time neared, LL Sanchez was happy to have his picture taken with the pretty girls – as most riders are. 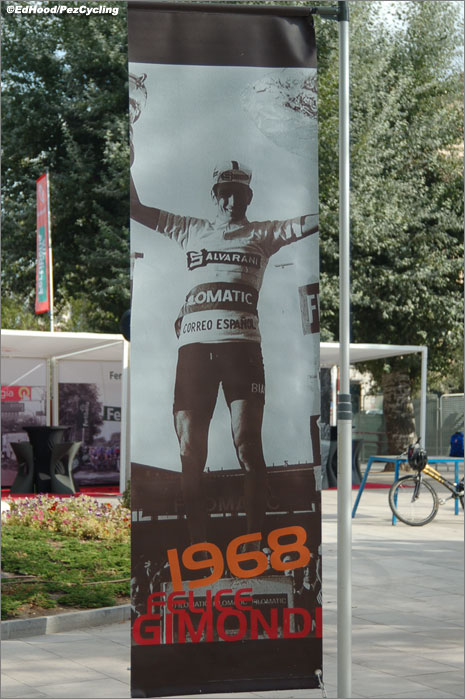 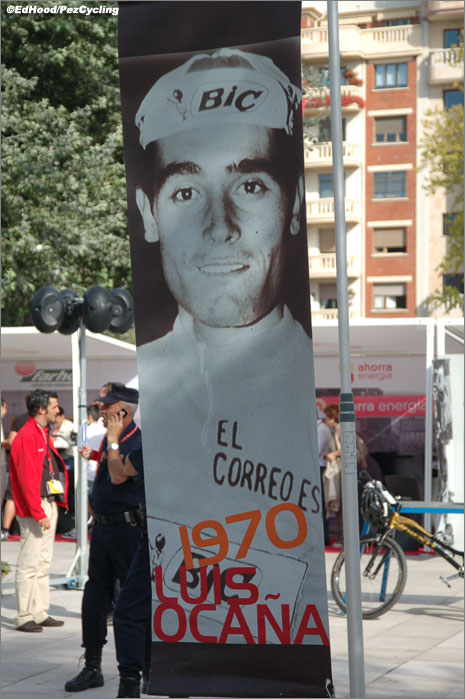 Roll out, just time to take some pictures of the cool banners they have of previous Vuelta winners at the start; Anquetil, Gimondi, Ocana – I don’t remember any of them moaning about their chain coming off.