Roadside Pez St. 9: Sun, sand, mountains and a bike race, it can’t get much better than this! Well it could I guess, if it had been possible to see all of the seven classified climbs and the finish then that would have been tops! Good news for next year; La Vuelta 2011 will start in Benidorm; I could walk there, if I wanted too!

Calpe is a beach resort, but it’s not wild like Benidorm down the coast or the island of Ibiza not far out to sea. It also has many Belgians and Dutch people living in and around the town, so it has a different feel to it and isn’t a bad place to be on a Sunday morning. 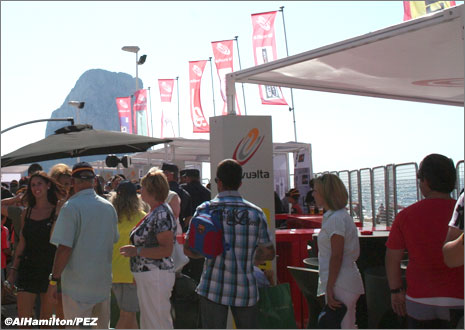 The village area was a bit cramped, but there wasn’t the usual rush for the free food and drink, there were lots of people, but they were more laid back and not grabbing at anything they could get. Enough about food, what about the riders? 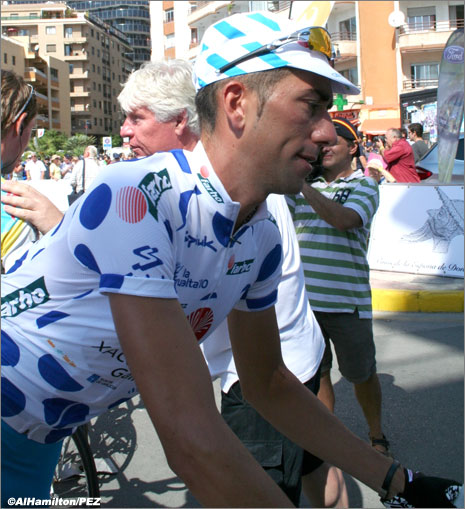 One of the first to sign-on was mountains leader; Serafin Martinez of Xacobeo-Galicia, he didn’t know he wouldn’t be wearing the jersey at the end of the day, many people thought he was only keeping it warm for David Moncoutie anyway! 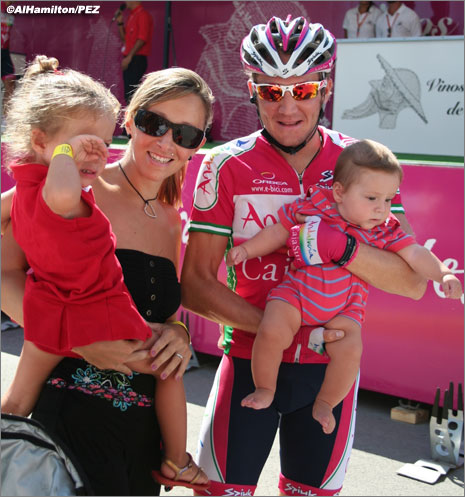 As it was Sunday there was a bit of a family feel to the day with riders wives and babies turning up for the start. Jose Angel Gomez-Marchante who rides for Andalucia-Cajasur is not having a great Vuelta due to a knee injury, with a beautiful family like his he can still find a big smile. 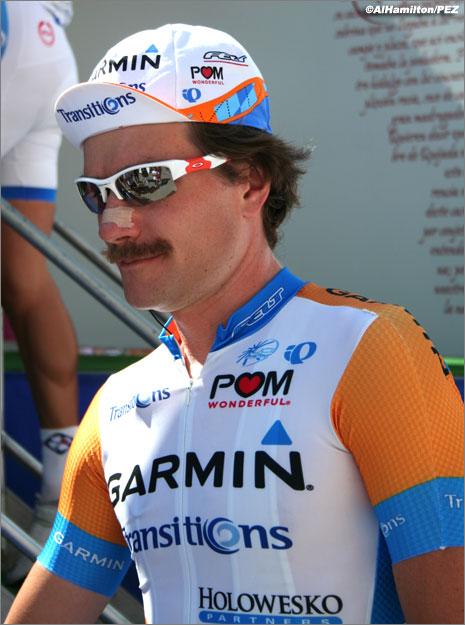 Another man who causes a few grins is Garmin’s; David Zabriskie, he is described at the stage start as having a “Retro Man” style with the moustache and the hat with the skip turned up. 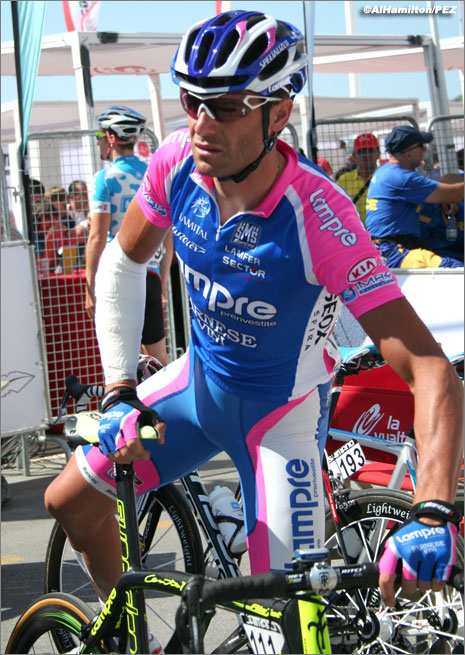 One man who isn’t known for smiling much, except when he wins, Alessandro Petacchi. He has a good reason not to be laughing as he now sports a large bandage on his arm from yesterday’s crash. He later abandoned. 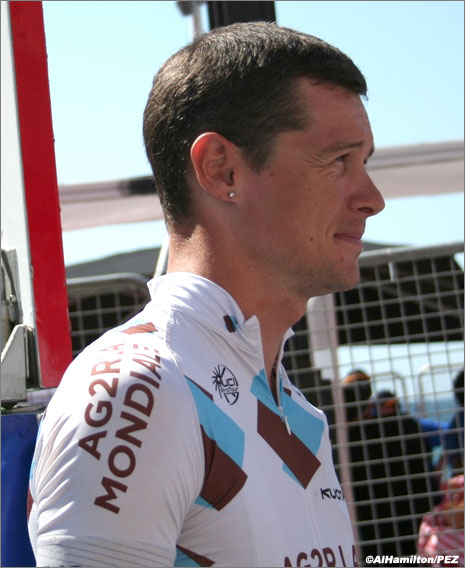 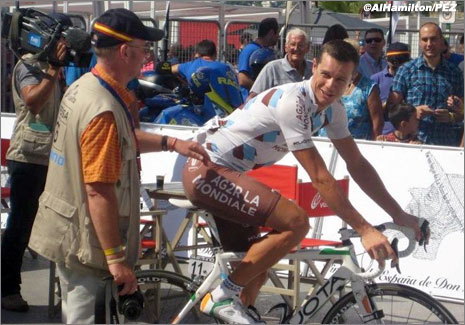 I managed to have a word with Nicolas Roche about yesterday’s stage; he had said that there was a 28 tooth sprocket fitted to his bike for the finish up the Xorret Del Cati. Did he use it? “Yea on the really steep bit and other times to save energy”. He found it funny that I had probably burn out the clutch of my car on the summit finish! 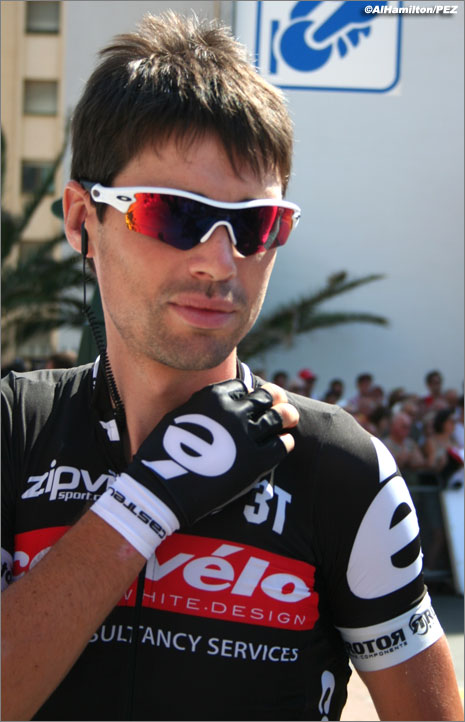 The other Irishman on the La Vuelta; Philip Deignan was feeling better, but wasn’t sure about the rest of the team, it has a strange feeling with some going with Sastre to Geox and some going to Garmin with Hushovd. He didn’t know if he had anything yet for next year, a worrying time for any Pro. 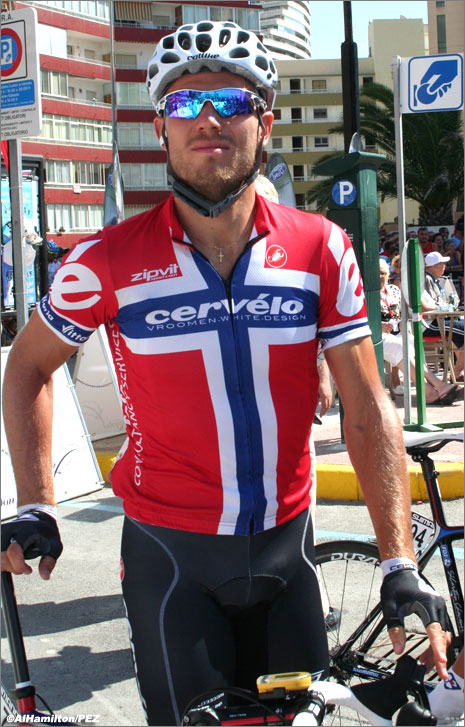 And there was the man himself, and yes he looks that powerful in the flesh! 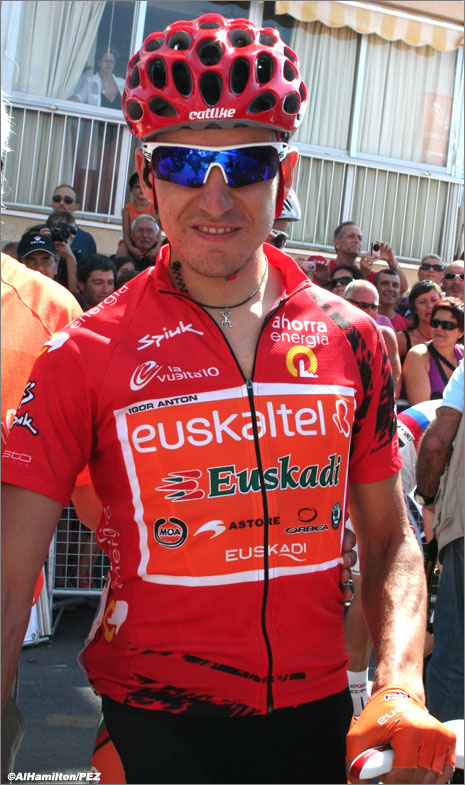 The Red Jersey ambled up for his interviews and to be photographed with as many people as wanted, cool, but will Igor Anton still be in that jersey in Madrid, mmmm. 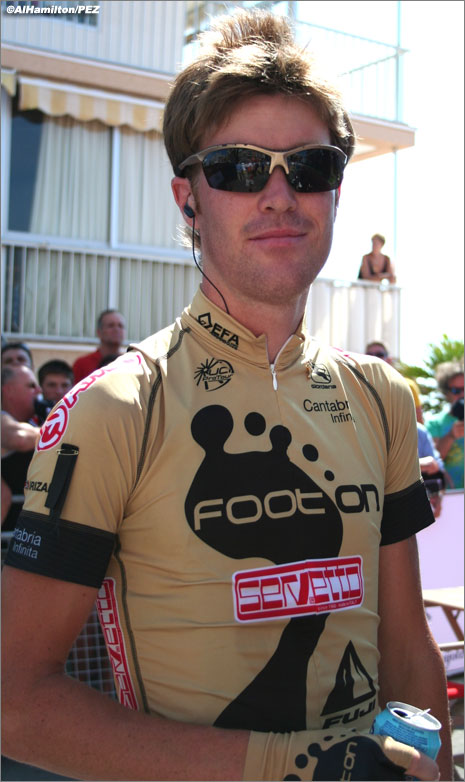 Johnnie Walker was a last minute stand-in for Valls, who was had not recovered from a great Tour de France. I had to congratulate him on his Spanish TV appearance the other day as it was quite funny. Basically it was all about the whisky of the same name and if he ever drank it etc. which he admitted to doing with ice and coke in the off-season, and he speaks very good Spanish.

One of the last up on the podium was Katusha’s Aleksandr Kolobnev with his little son and bike, a champion in the making?

Time to head out onto the course, cutting out the loop up the coast I could go straight to the summit of the Col De Rates, it’s the climb of the area, the one everyone want to go over now and again. Parking was going to be difficult at the Mountain GP, but further up the road there is another summit to spread out the riders and it’s not so popular with the fans. 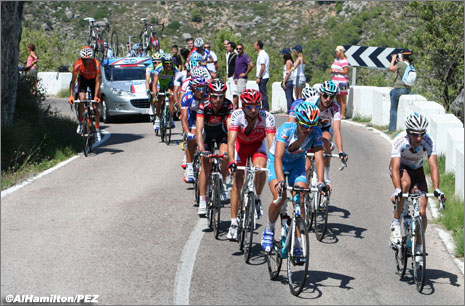 The break came through working well together, they had gone away very early in the stage and at this point had a lead of around 5 minutes, although this became 10 minutes later on. 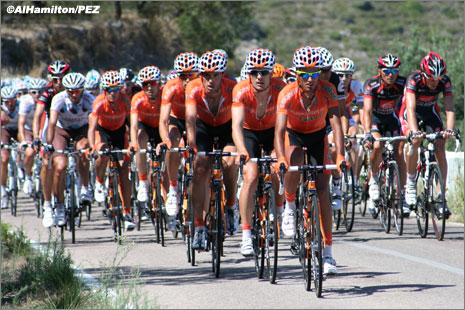 Not surprisingly Euskaltel were doing the work in the peloton for their man Anton, it could have all gone wrong with such a large gap. 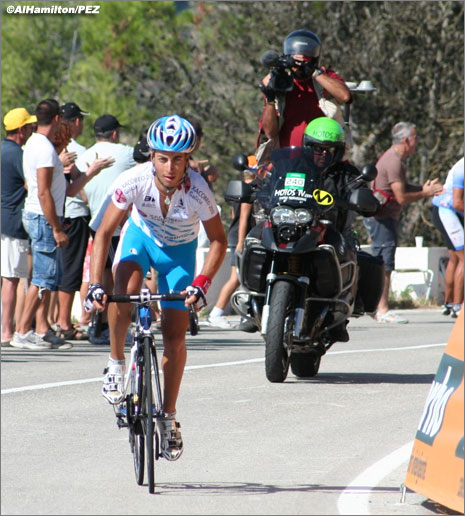 With a bit of fast driving, short cut and help from the Guardia Civil I managed to get in front of the race for the summit of the Tudons. It’s the same hill as yesterday, but on a different road, steeper and climbs to 1024 meters, not super hard though, the sprinters managed to hang on. First over was Gonzalo Rabunal (Xacobeo-Galicia), followed by the others of the break-away with Moncoutie taking more points for the Mountains Jersey. Quick-Step’s Carlos Barredo was suffering from the hunger “knock” and had to go back to the bunch, he got a big cheer from the fans on the Tudons. 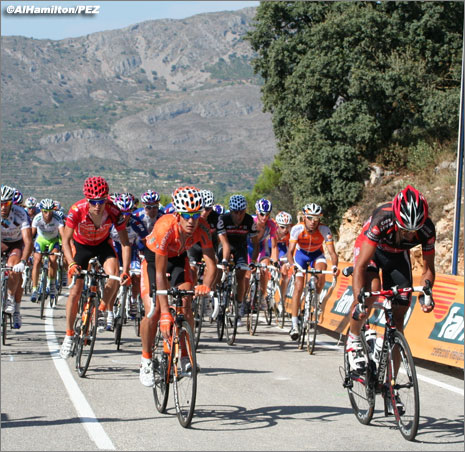 The chase bunch was still altogether with the sprinters all managing to hang on. 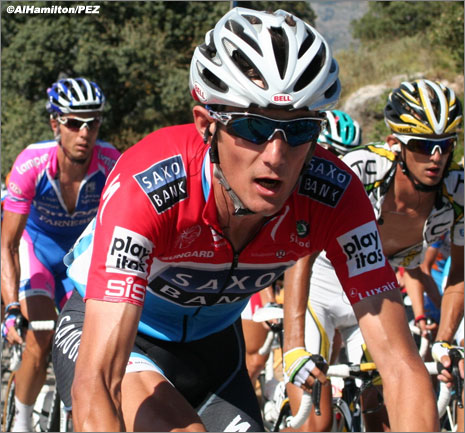 Frank Schleck was comfortable enough in the middle of the bunch, maybe he was thinking of the time he lost yesterday? 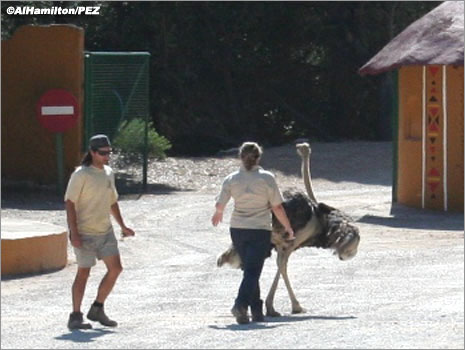 That was enough for me today, with no more short cuts I could only go to the finish and maybe miss that, so I went to the Safari Park for a coke and a sandwich, didn’t expect to be chased by an ostrich!

I hope you enjoyed my Roadside adventures, I know I have!

Stay Pez for all the Vuelta Action to come.