Race Report: A sprinters’ day with a climb near the start, the usual break went up the road, but they were only allowed a maximum lead of 3 minutes and were just out there for the show. In the end Mark Cavendish made it look sooo easy!

After yesterday’s action, today’s stage is a little easier, there is a hard 2nd Cat climb starting at 38 kilometres out from the start in Andorra la Vella and topping on the Coll de Boixois after 16 kilometres to 1,370 meters altitude. From then on it’s mostly downhill to the finish in Lleida to cover 172.5 kilometres. The weather is much cooler now that the race is in the North of Spain, but let’s hope we don’t see a repeat of the weather of few years ago when La Vuelta went to the Lagos de Covadonga in a storm, the race returns there this Sunday.

After only around 10 kilometres six riders thought they would try their luck; Markus Eichler (Milram), Perrig Quemeneur (Bbox), Gustavo Cesar (Xacobeo-Galicia), Lars Ytting Bak (HTC), Antonio Piedra (Andalucia CajaSur) and Biel Kadri (Ag2r), on the climb they were joined by David Garcia (Xacobeo-Galicia), Marco Marzano (Lampre) and Gustavo Rodriguez (Xacobeo-Galicia) and by the time they had crossed the Coll de Boixois they had 3 minutes advantage. 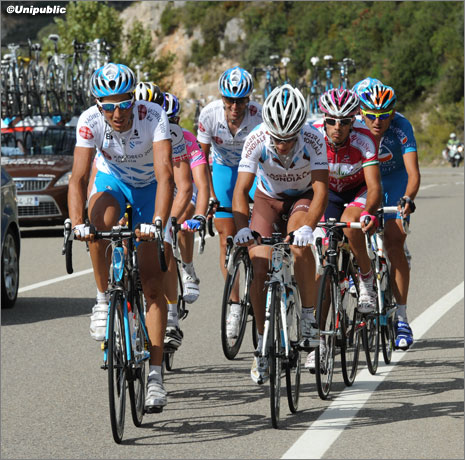 The bunch was lead by Euskaltel for Igor Anton in the Red jersey with Quick-Step and Garmin helping, both teams had missed the break and Garmin has Tyler Farrar for the sprint. The gap was held to around the 2 minute mark and apart from Markus Eichler’s chain coming off on a slight climb, with around 55 kilometres to the finish, there was nothing to report for a long time.

In the peloton Thor Hushovd, Mark Cavendish and Tyler Farrar were all near the back resting up for the sprint which is to be slightly down hill on the run-in and then flat for the last 2 kilometres with a roundabout at 2K, a left hand corner at 1K and then a right hander with 400 metres to the line.

Footon-Servetto started to help with the chase, stretching the bunch out into a long single line. With 30 kilometres left the lead was down to 44 seconds and Quick-Step still had the most amount of riders on the front of the peloton.

25K’s to go and through the town of Balaguer the gap had come back to 22 seconds and dropping quickly and their time off the front ended 22.7 kilometres out. 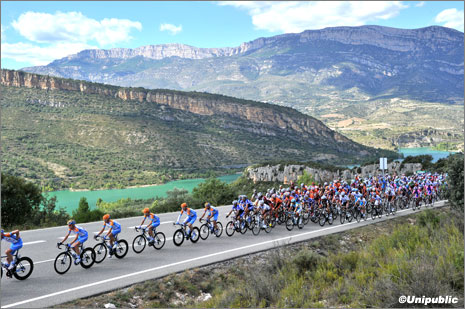 As soon as the break was captured the speed dropped, Footon, Garmin and Quick-Step were still holding it all together, but everyone was waiting for the gallop.

As they hit 15 to go Garmin put seven riders to the front into a cross-wind and lifted the speed, HTC and Caisse d’Epargne also put men to the fore. Xacobeo-Galicia then Cervelo, followed by Euskaltel all put men on the front as they entered the last 10 kilometres.

Caisse d’Epargne had a problem with Luis Leon Sanchez, but with the help of three team mates he was soon back in the fold.

5 kilometres out and David Zabriskie did a long, hard turn to pull over to put two HTC riders in charge, then it was the turn of an arm-warmer wearing David Millar to tow the bunch towards the sprint. 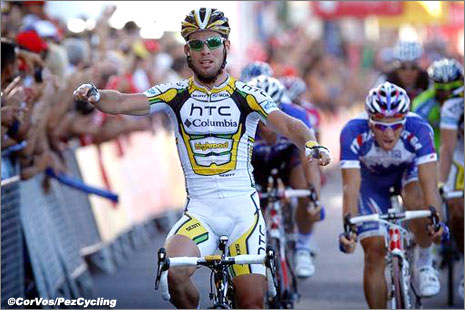 Round the corner at the red flag and HTC had the bit between their teeth, the lead out was a bit slow with Cavendish on the wheel of Goss. The position was perfect and Goss lead him well away from the others, Cav had time to look back and take the win without much effort. Goss could have won the stage and would have been second if he had not crossed the line with his arms in the air, but Farrar took second.

Cavendish was very happy and relaxed at the finish and said his team did a great job, bit of an understatement from the Manx man as he won by two or three bike lengths. 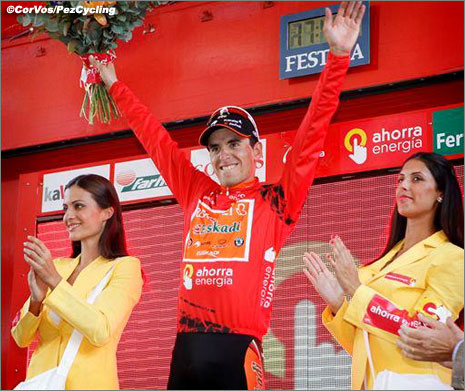 Cavendish took the Points jersey, the Overall and Mountains jerseys stayed the same.

Tomorrow’s stage to Burgos is generally uphill, but with nothing too steep, for sure it will be a hard-man’s day, stay Pez’d for the action from Spain.