Race Report: An action packed day, but for race leader; Igor Anton it was not the action he would have wanted. A high speed crash has put his Vuelta hopes out of the question as he is now in hospital. The battle of the Peсa Cabarga has sorted out the new Red Jersey wearer, but this Vuelta is still wide open.

The next three days are probably going to be the most important for the final overall. Tomorrow has the famous summit finish on the Lagos de Covadonga, but the stage up to that point is flat, it will be a great finish, but maybe not decisive. Monday’s stage has four big climbs and a summit finish up the Cotobello which climbs 1,000 metres to the finish.

This morning as I had breakfast of Cafй con leche with some bread and albondigas in my local village bar Pol-Mar I read the preview of today’s stage in sports daily AS. There was a short interview with ex-rider Enrique Cima, he won an individual Mountain Time Trial up today’s final climb of the Peсa Cabarga, way back in 1977. That year he rode for KAS and its leader Galdуs, the race was the Vuelta a Cantabria. His quote was “it (Peсa Cabarga) has terrible deaths!” and he should know as he won the TT and finished second overall to his leader Galdуs.

His take on the summit finish is that it is similar to the stage 8 finish up the Xorret del Cati, but longer and has ramps of 19%. Cima thinks Mosquera (at 1:29) will attack at the base and Rodriguez (at 1:17) and Anton (leader) will make their move on the steep parts of the climb. If these days don’t decide this Vuelta then next Saturdays’ stage to the Bola del Mundo will! Other news is that Oscar Freire will abandon tomorrow.

The Stage Action
Before the summit finish we have 178 hard kilometres from Burgos with the 3rd Cat Alto de Bocos at 78 K’s, then the Portillo de Lunada (2nd Cat) at 107.5 K’s and the Alto del Caracol (2nd Cat) after 126.6 kilometres, then the last 6 kilometres of uphill to the finish to Peсa Cabarga which starts 172 out.

As to be expected a break formed fairly early in the stage and soon built up a lead of over 12 minutes. In the group were Garmin’s two David’s; Millar and Zabriskie along with Niki Trepstra from Milram. Euskaltel-Euskadi was chasing, but not too keenly.

On the climb of the Portillo de Lunada (2nd Cat) with 70 kilometres to the finish the three had 11 minutes and 12 seconds in hand on a Cervelo powered peloton, Carlos Sastre must been interested in the finalй, he must be feeling better after his crash yesterday.

After the long descent of the Lunada the climb of the Alto del Caracol (2nd Cat) starts immediately. Under the pressure of the Caisse d’Epargne team the race was split on the climb with many of the non-climber being shelled out the back. Luis Leon Sanchez (Caisse d’Epargne) attacked taking Alexander Kolobnev (Katusha) with him, by the top-with 51.4 kilometres of the stage left-the gap had been brought down to 5:27 with the bunch at 5:40, at this stage it looked like it was touch and go whether the break would succeed.

From the base of the Caracol to the start of the Peсa Cabarga is mostly downhill for 32 kilometres, Sanchez and Kolobnev gave up their attempt and were reeled back by the men in Orange with 26 K’s to go, this caused a lull in the chase which went back out to 5:18 and allowed a few of the dropped riders back up to the main field.
Katusha were lending a hand to Euskaltel with the work of pulling back the escapees as Zabriskie lost contact, leaving the two out front with a gap of 3:28 with 16 kilometres left, the chances of the Millar and Trepstra tandem going all the way to the line were not good.

The Peсa Cabarga
At the base of the Summit finish with 6 kilometres of up-hill purgatory to go, Millar and Trepstra had an advantage of 2:03. A high speed crash Igor Anton and a few of his team mates, the jersey and his shorts were shredded and his bike was wasted. Anton sat in his team car and looked like his race was over, his overall was gone, and that is for sure!

Millar and Trepstra were now being chased by Liquigas for Nibali, at 3.5 kilometres Trepstra rode away from Millar leaving him to be swallowed up. As predicted Mosquera attacked the small group of front men, then Nibali went passed him while Nico Roche was on the front. “Purito” Rodriguez crossed to him as the pair fought their way through the crowd. 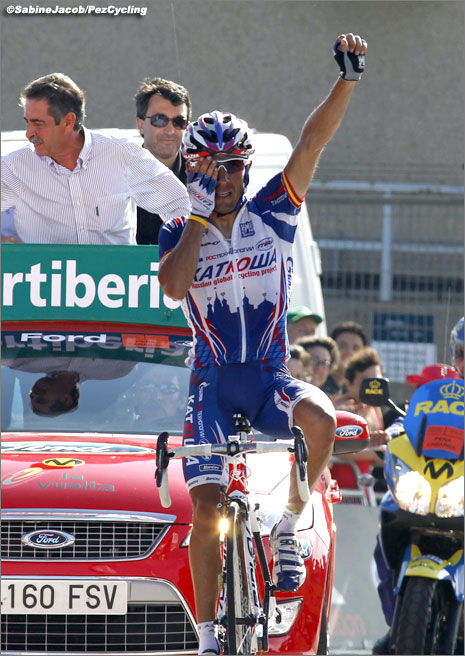 At the 1K banner Rodriguez went for it and soon distanced Nibali who just didn’t have the legs to follow the little Spaniard. Round the last sharp, steep bend Rodriguez was suffering as he took the stage, but behind Nibali cracked as soon as he crossed the line needing to be caught by helpers as he collapsed to the road. Mosquera was third and it would come down to the time bonuses to discover who would take the Red Jersey from the now hospitalised Igor Anton.

Stage for Rodriguez, crossed the line covering one eye with his hand (he had been stung by a wasp). Nibali takes the overall and a great ride by Nico Roche moves him into 5th overall.