Race report: We had suitably gloomy and atmospheric conditions for the Vuelta’s entry to the mountain kingdom of Lagos de Covadonga as riders emerged grimacing out of the mist to cross the summit finish line. No massive changes overall, but this is a real softener ahead of a vicious day tomorrow. The climb to the lakes will make itself felt yet …

The stage winner, for the first time in a Grand Tour, is QuickStep’s Spanish hero Carlos Barredo. Often, he doesn’t make it work when it comes to attacking: the wrong time, the wrong place … or both. Today, he nailed it, making the break of the day and jumping his colleagues as the slopes pitched up.

His name goes into the history books alongside Marino Lejaretta, Pedro Delgado and Alvaro Pino among others – all winners up here for the host nation. 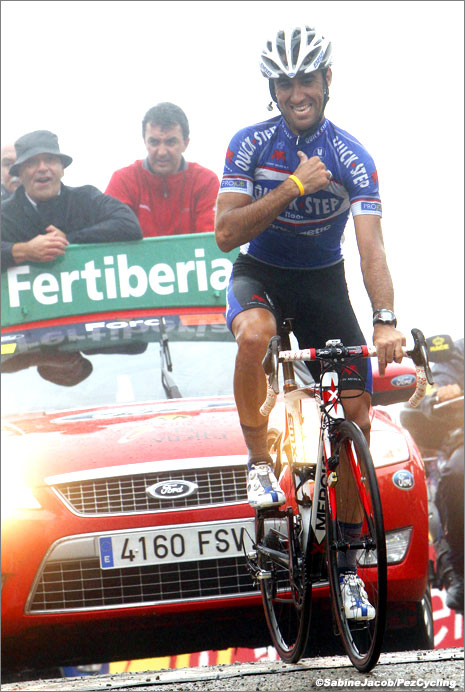 Early doors: To borrow a particularly nonsensical soccer term, the action kicked off ‘early doors’. The first hour was characterized by a flurry of attacks and counters, with race leader Vincenzo Nibali even off the front at one point. Once we’re past the 60kms point, a bigger break gets clear and then splinters leaving a handful clear.

Unsurprisingly, Barredo, who can usually be relied upon to be the guy in the team meeting with his arm up agreeing to go for a mental escape mission, is one of the escapees.

Along with him, HTC-Columbia’s Martin Velits, Omega Pharma-Lotto pair Greg Van Avermaet and Olivier Kaisen; Pierre Cazaux (FDJ) and Cofidis’ Nico Sijmens. The lead they build up goes out beyond nine minutes as the peloton decides it’s too early to step on the gas. Why?

It’s a long, flat, fast, relatively uninvolved run for the first 174kms, before there’s a sudden change in emphasis. The road goes up; the legs go ‘BANG!’ It’s the notorious mountain playground of Lagos de Covadonga – 12.5kms at a lung-searing seven per cent gradient.

Bernard Hinault wrecked his knee chasing Lejaretta up here in 1983 to the point that he won his Vuelta but he couldn’t make the start of the Tour de France, won that year by a debutant, the late, great Laurent Fignon. Miguel Indurain couldn’t even face the climb and abandoned the 1996 Vuelta and his career in Canga de Onis which marks the start of this monster.

16kms to race: It’s exactly eight minutes of a gap as Caisse d’Epargne, Xacobeo-Galicia and Ag2r take charge of things at Cabeza de Pelotуn. It’s turning a bit miserable; not the 40 Celsius plus of week one – it’s now raining and weather for arm-warmers and rain capes.

The six up front are still rolling along nicely and will fancy their chances of hanging on now. The photographers’ camera flashes spear through the gloom adding to the atmosphere of impending menace.

Onto the slopes now, and it’s a gentle upswing to start with. Velits attacks the break, but Barredo is up to him and away solo. He’s got 5’58” on the chasing peloton as the break disintegrates in the rain.

Ten kilometers left for Barredo who’s ploughing on but starting to look a little frayed around the edges. It’s Xacobeo-Galicia for Ezequiel Mosquera and Liquigas-Doimo for overall leader Vincenzo Nibali stringing things out in the peloton.

Barredo enters La Huesera with seven kilometers to go; the translation is ‘the ossuary’ and is the last resting place of scores upon scores of soldiers who fell when the Christians took on the Moors in a notorious eighth Century battle which led to an era known by Spanish historians as the Reconquista.

Will the boneyard be the death of Barredo’s hopes today? The road ramps up ferociously here as it hits 15% for the best part of a kilometre. It’s out-of-the-saddle time now, as Barredo tries to eke out his lead.

Six kilometers to go as Barredo rides under a banner advertising the Costa Blanca, more normally associated with sun and sea, and vanishes into the mist.

Sastre attacks the Nibali group! Mosquera is onto him directly but Liquigas don’t panic and Kreuziger hauls them back. Sastre looks around to survey the damage and Mosquera tries again.

Nibali’s on his own now as Kreuziger pops. Inside six to go for Barredo and he rides through a tunnel of fans before hitting a short downhill.

Mosquera does a good job of ignoring the flotilla of supporters screaming encouragement in his wake. He’s now putting enough gloom between him and the Nibali group so that they’re not even visible in the rain.

Four-and-a-half kilometers left as Barredo gets a pep talk from his team car and steps on the gas again. The leaders are on the short descent that Barredo took just over three minutes earlier and Nibali almost gets it disastrously wrong, missing a stone wall by inches as he frantically corrects his line.

Two clicks left for Barredo who is now rocking from side to side with the effort. Mosquera is still trying to open a gap on Nibali but his momentum seems to have stalled a bit. The overall leader now has just the other Velits twin (Peter) and Joaquim Rodrigeuz with him as Tom Danielson loses contact.

Barredo hits another descent as he approaches the last five per cent ramp up that marks the last kilometer. He’s barreling along but needs to concentrate on these final corners. He turns and gestures to the team car. It’s in the bag!

He takes a fine win, gesturing to his jersey, with over a minute to Nico Sijmens. The Omega Pharma-Lotto boys, split by Pierre Cazaux, just hang on ahead of Mosquera, but the bigger story is that Nibali’s steady tempo has ceded just eight seconds to Mosquera. Great ride from the young Italian to retain the lead.

Ed and Martin are somewhere in Asturias so stay tuned for their roadside adventures. Keep it Pez!