Race Report: There was many up’s and Down’s today and not just the profile of the course! Just like the champagne on the podium, the Overall Top Ten has been given a good shake, a new Red Jersey wearer, some happy faces and some broken hearts! A top day of action.

In this morning’s Spanish sports papers there wasn’t so much about yesterday’s stage to the Lagos de Covadonga, it was great to watch, but it wasn’t very decisive, nothing much changed. Ezequiel Mosquera gained 11 seconds and Peter Velits moved up into the top five, giving us seven riders all within 3 minutes of overall victory, today could be very important as many riders need time in hand before the individual TT on Wednesday and the Mega-climb of the Bola del Mundo on the penultimate day of the race. 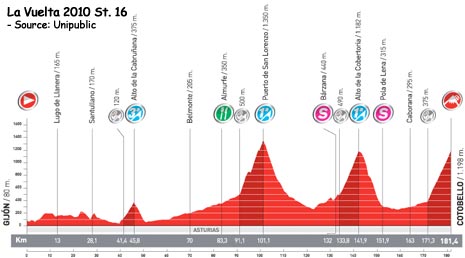 Other news was the explanation of Carlos Barredo’s victory salute, drawing a line down his front with his thumb; his father had recently undergone open heart surgery and this was Carlos’s sign to the man who had taken him bike riding up this climb when he was a boy. Crash victim of Saturday, ex-overall leader, Igor Antуn was visited in hospital by footballer Koikili who presented him with an Athletic Bilbao jersey signed by the team. Pity they were beaten at the weekend 2-1 by Atlйtico Madrid!

Joaquim “Purito” Rodriguez said this morning in AS that he “likes the Cotobello stage, I have intentions!” He knows he has to take time from Nibali today and on the Bola del Mundo. He admits he isn’t keen on the 46 kilometre individual time trial in Peсafiel.

Today’s stage: is 181.4 kilometres of ups and downs, one 3rd Cat climb (Alto de la Cabruсana) after 45 kilometres, two 1st Cats (Puerto San Lorenzo and Alto de la Cobertoria) at 101 and 141 Kilometres, then the summit finish up to the Alto de Cotobello. These are hard roads to conquer as the San Lorenzo is 10 kilometres long climbing 850 metres with parts at 14% gradient, then the Cobertoria climbs 690 metres in 8 kilometres at an average of 8.5%, the worst parts being 12%. Anyone with any energy left has 10.1 kilometres of the Cotobello to climb with 823 metres at an average of 8.5% with ramps of 10%, for sure NOT a sprinters’ day!

The First Climb
Before the first climb there was a flurry of action with attacks from Menchov and a few others, they were all annulled leaving David Moncoutie (Cofidis) out front to collect more points for his Mountains Jersey, as soon as he crested the Alto de la Cabruсana he was back in the fold.

By the “Feed Zone” with 84 kilometres ridden, the group were 2 minutes 30 seconds in front of the Liquigas lead peloton with all the top men were keeping an eye on each other.

Puerto San Lorenzo
The leading group had stretched the advantage to over 7 minutes, but they were back to 3:30 as they commenced the climb of the San Lorenzo. Behind; two Euskaltel riders (Mikel Nieve and Amets Txurruka) were trying to cross to the leaders as Dyachenko (Astana) was dropped from the break and the peloton was splitting into pieces. Luis Leon Sanchez (Caisse d’Epargne) was first over the top with the two Euskaltel’s at 1:24 and the main peloton at 1:38 with 80 kilometres to the finish. 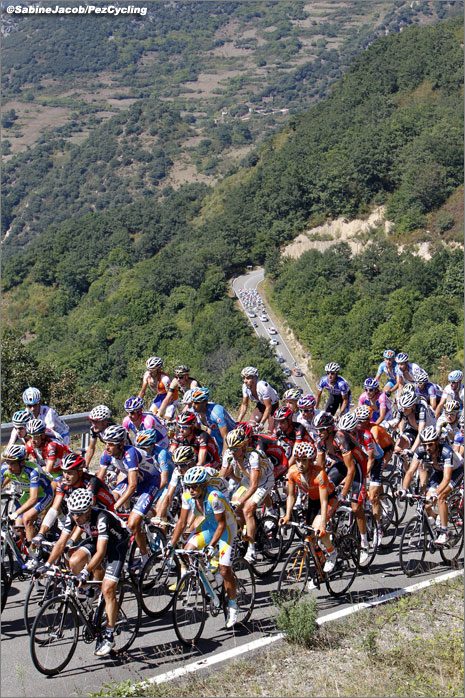 There was also a group of eight between the lead and the peloton that had 35 seconds on the Red Jersey bunch, but were 1:45 behind the beak with 52 kilometres to go. The eight were; David Moncoutie (Cofidis), Johan Tschopp (Bbox Bouygues), Ruben Plaza & David Lopez (Caisse d’Eparagne), Andrei Kashechkin (Lampre), Alexander Dyachenko (Astana), Jan Bakelandts (Omega-Lotto) and Alexander Kolobnev (Katusha).

Alto de la Cobertoria
Saxo Bank put Fabian Cancellara to work at the base of the climb as Liquigas had started to falter and the gap had gone to 2:46 for the leaders and 26 seconds to the group in between, what was left of the peloton numbered around 50 riders.

Cancellara rode on the front for quite a few kilometres, this reeled in most of the in-between group, and this launched Frank Schleck off on his own up the road and forcing Liquigas to chase again. At the front the lead group had been whittled down to five riders; Sanchez (Caisse d’Epargne), Peterson (Garmin), Txurruka & Nieve (Euskaltel) and de Weert (Quick-Step).

Frank Schleck was eventually pulled in by the work of Roman Kreuziger for Nibali, this action had split the peloton, but all the top ten riders were safely there.

At the top Sanchez was first over the top with the Red Jersey group at 1:43 with 39.5 kilometres to the finish line. From the bottom of the Cobertoria to the start of the summit finish climb of the Cotobello there are 18 kilometres of hard roads, through the sprint in Pola de Lena (29 km’s) the group were 1:55 in front of the favourites. Nibali had two riders to help him, although they can’t have much left in the tank for later. The peloton had grown to around 30 riders as some riders had made it back on the descent. Ag2r were also helping the chase for their man Nicholas Roche, but the lead was to hover between 1:40 and the 2:40 mark.

Alto de Cotobello
At the base of the Summit finish to the Cotobello (10.1 km’s) the five up-front had put their heads down and lengthened the lead to 2:48. Liquigas, Cofidis, Ag2r and Cervelo all had men working to limit the lead with Luis Leon being dangerous to some of the riders in the top ten.

Frank Schleck was the first to make an attack from the bunch as Mikel Nieve split the leaders. A second attack from Schleck shook off Danielson from his wheel as Tondo and Plaza were in trouble. Nibali let Kreuziger pull on the hill to keep Schleck at a good distance, Roche and Velits would be the losers if Schleck isn’t caught. Tom Danielson got back to Schleck as Nieve was on his own up front and hoping for the stage win.

The Last 5 K’s
Carlos Sastre jumped from the chasers looking very keen, he got up to Schleck and Danielson in no time and attacked straight past, Schleck latched on to Sastre’s wheel, distancing Danielson. The Red Jersey group was still being powered by Kreuziger.

At 3 K’s Frank Schleck attacked Sastre for the third time, he gained 10 metres and Sastre couldn’t pull it back. Nieve had 1:30 over Schleck and 2 minutes over the Nibali group which had lost Velits and Tondo was well gone.

The Last K
Mikel Nieve was well ahead and had the stage in the bag, Schleck caught Sanchez and Nico Roche jumped from the chase as Nibali and Kreuziger were in trouble and the group was in pieces. Schleck now caught de Weert and passed him for second place; it was down to the stop watch to see how the GC would change. Rodriguez, Mosquera and Roche had all left Nibali on the road, behind was Velits and Danielson. 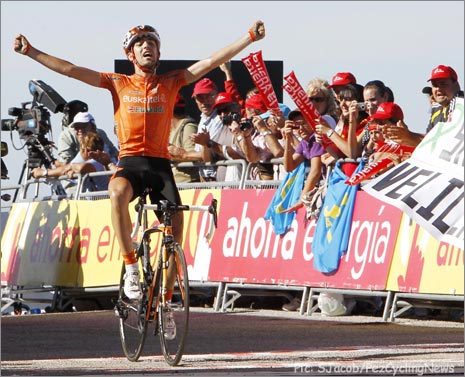 The little Basque; Mikel Nieve won the stage and the battle behind put Rodriguez ahead of Nibali in the Red jersey, Frank Schleck is now 4th, Nico Roche moved to 5th and even though Tom Danielson suffered at the end he moved up to 7th. A great day in the saddle for many, but not for all!

The BIG question: Is this enough of a time gap time for Rodriguez to take the overall home on Sunday? Stay Pez’d to find out.