Race Report: The host town for stage two of this year’s Vuelta is Alcalб de Guadaнra and the temperature is already sloping up, up, up. It’s blazing by the mid-day start and the riders have been slow to sign in for their day at the office. The route profile is jagged but the biggest challenge will be remembering to eat enough, as well as drink enough, on a tortuously hot stage.

Mark Cavendish proudly sports the throw-back red leader’s jersey, just like it used to be in the old days. Despite his late night, hauling the tunic over his head at Iron Maiden’s favorite time of day (“Two Minutes To Midnight”), he should get over today’s third category climb, the Alto de Pruna, without too many problems.

Then the road spikes up continually before a lightning fast final thirty kms down to the Brits’ holiday homeland of Marbella, where he can no doubt find enough St George’s pubs to keep him in full English breakfasts from now ’til Kingdom come.

They’re off …
There’s a bit of pandemonium before the peloton even exits the neutral zone as Quick Step’s Dario Cataldo hits the tarmac, without ill effect. The heat kept the riders away from the sign on until the last possible moment, and there were apparently a fair few signatures missing from the paperwork, so riders will be digging down the back of the sofas on Team Sky’s luxury bus to see if they can find some of Murdoch’s billions to pay the fines.

They’re off… for real!
More or less from the flag dropping, we’ve got our escape of the day. Footon-Servetto’s young Aussie Johnnie Walker, collaborating with Javier Ramirez from local heroes Andalucia Cajasur, Mickael Delage (Omega Pharma-Lotto) and Cofidis’ Mickaлl Buffaz, who won the Paris-Correze a week or so back, lights the blue touch paper.

The peloton turns a blind eye and they’re gone. The lead climbs with the temperature: it’s a snip over seven minutes at 58kms raced as the mercury reaches a balmy 37° Celsius. 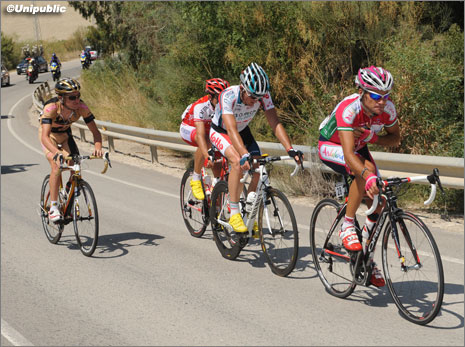 The foursome hit the Alto de Pruna and Buffaz demonstrates this literally, smashing down onto the road and out of the race with a broken collarbone. Delage takes the points and with it the climber’s jersey ‘de puntos azules’, ahead of local boy Ramirez who lives just down the road in Carmona. The lead is around the six-and-a-half-minute mark coming off the top of the climb.

Just over half-distance and now escapee Delage visits the deck, but is up and riding quickly. Behind in the peloton, HTC-Columbia’s chase is disrupted as Lars Bak and Martin Velits take a tumble, and Cav’s boys ease off the pace a bit.

The lead trio goes through the second and final intermediate sprint of the day in Ronda, and Delage pulls a fast one as he jumps away from Walker and Ramirez. It’s a bit suicidal with so far to go, but he stretches it out to 30 seconds in no time, and he’s still four minutes ahead of the main field. 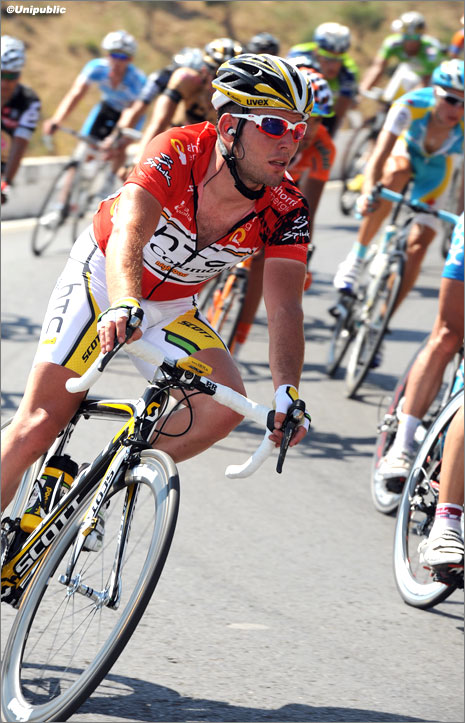 Eventually, Delage thinks better of his solo bid and waits for the other two. Xacobeo-Galicia’s Marcos Garcia tries to come across and is up to them at top speed. 42kms to go now, the gap is still over a minute to the peloton but falling fast. The four up front are too busy arguing to make a go of it.

The end is nigh …
Johnnie Walker gives it a go with 30kms to go and holds out until his erstwhile companions pick him up with 16kms to go as the peloton hurtles downhill behind. A Katusha rider gets pushed wide and runs off into the stones at speed.

It’s going to be a sprint as the escapees are finally nailed. Lampre, Liquigas, Cervelo and Milram are sending men to the front as HTC-Columbia get some respite. No one tries to get away, it’s a no-nonsense run at the line. 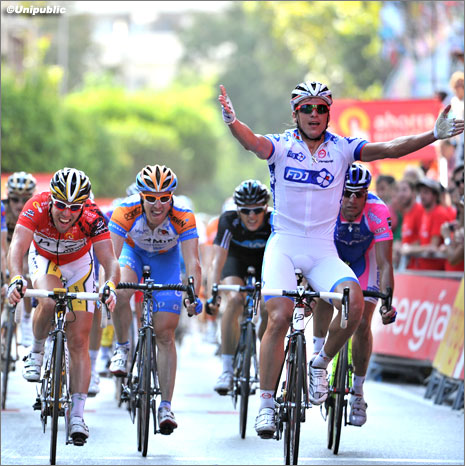 Cav’s boys lead the way into the last kilometer, but Milram hit the front. Petacchi and Hushovd are both up there. Hondo leads out Petacchi, Cav comes around Farrar, but it’s Yauheni Hutarovich who comes rocketing out of Sebastian Chavanel’s slipstream to pip Cav on the line. A brilliant stage win for Francaise des Jeux.

No massive changes overall meaning Cavendish at least has the consolation fo keeping his red jersey.

Loads more to come from the Vuelta, so keep it Pez!