Race Report: This stage was planned to be the stage that would decide this 75th anniversary Vuelta a Espaсa and in the end it nearly did! An attack from second placed Mosquera shook the Red Jersey of Nibali, but he held hard and rode for all his worth to save the biggest win of his cycling career. A day of action was promised and there was no disappointment.

“La Vuelta se decide en la esperada Bola del Mundo” was the headline in this morning’s AS; “The Vuelta is expected to be decided on the Bola del Mundo”. Vincenzo Nibali has to defend his 50 seconds lead on Ezequiel Mosquera, the Italian pulled out an extra 12 seconds yesterday to help his cause. According to Jose A. Esquerro in AS “it’s a foreigner against a Spaniard, it could make a great script for a Hollywood film”. The Bola del Mundo was defined by Mosquera: “it’s a Xorret de Cati on top of the Navacerrada!” The climb is 3.2 kilometres at 12% including maximum ramps of 22% with a total of 22 kilometres of climbing and much of the climb is on a concrete surface which is said to be un-rideable when wet, rain is possible. 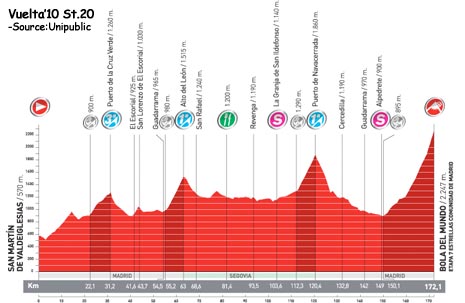 Mosquera’s advantage and possible problem is that he is a gasoil (diesel) engine and so will have to attack early on the climb, if he has the cojones! he doesn’t have the explosive style of other top climbers.

The TV mast was erected on the top of the Bola del Mundo in 1959 and at its 2,247metres altitude it receives arctic weather conditions with temperatures below -20єC and winds of 190 kph. Yesterday’s stage finish had a police estimated crowd of 10,000 and more are expected today, there will be extra police, plus the Guardia Civil and 200 volunteers, for the riders there will be a spare wheel station at 500 meters and the wheel moto’s and the TV are using extra stationary cameras, helicopters and an aeroplane, everyone is taking today very seriously.

Alto del Leуn
The second climb of the day, the 1st Cat Alto del Leуn, is 8.5 kilometres long to an altitude of 1,515 metres, climbing 550 metres, with an average rise of 6.4% to a maximum of 13.8% in places. Before the climb Liquigas and Garmin were pulling the bunch, but without too much urgency as the gap had risen to 4:40.

On the climb; Katusha came to the front to put the pressure on and pulled the lead back by a minute to 3:30 as yesterday’s winner, Philippe Gilbert, was first over the top. Through the “feed zone” after 81 kilometres the lead riders were still just over 3 minutes ahead. After another 10 kilometres the speed of the peloton had taken another half minute from the advantage. The battle today isn’t just between the first two riders on GC, behind them 4th to 9th places are only separated by 34 seconds, so there is still a lot to play for in the minor placing and this brought more teams to the fore, the breakaway was doomed from the start, but the end was in sight with 60 kilometres to go and at the start of the climb of the Puerto de Navacerrada the lead was down to 1:10.

Puerto de Navacerrada
The Navacerrada is a regular at the Vuelta, this 1st Cat climb starts 112 kilometres out, it’s 8.1 kilometres out and after 570 metres of climbing it reaches 1,860 metres altitude, its maximum steepness is 8.6%, but it is a steady grind to the top.

Cofidis rider; Tony Gallopin attacked at the start of the climb, this saw Gilbert out the back as the others chased. Jerome of Bbox was next to try his luck, but the group’s days were numbered. Euskaltel put Mikel Nieve and Amets Txurruka with Fernandez (Xacobeo-Galicia) off the front of the peloton as the break split under the pressure of Ruben Plaza (Caisse d’Epargne), he was joined by Johann Tschoop (Bbox).

Plaza pushed his way through the big crowd at the top first as the chasing trio of Nieve, Txurruka and Fernandez were joined by mountains leader Moncoutie, and Kolobnev and the riders of the break that could hang on, Frank Schleck had a rider on the front of the peloton.

Plaza and Tschoop work well together and pull out to 1:13 from the bunch and 39 seconds to the chasers with 40 kilometres to the summit finish. The chase group were hovering between the peloton and Plaza/Tschoop who were out front at 1:26. But at 30 kilometres out, going through Guadarrama the chasers caught the two escapees’ with 8 K’s to the start of the most important climb of this Vuelta a Espaсa.

Bola del Mundo
At the base of the Navacerrada/Bola del Mundo the lead group were 1:35 ahead of the peloton and Oroz of Euskaltel was burying himself to keep the group away as it included his team mates; Nieve and Txurruka.

As expected Xacobeo and Liquigas controlled the peloton at a good pace, but not at full effort (yet!). The leaders split as the climb started bite into their legs leaving Cuesta (Cervelo), Plaza (Caisse d’Epargne), Guzev (Katusha), Cheula (Footon), Toribio (Andalucia) and Kadri (Ag2r) out front, the Euskaltel plan didn’t work!

The road started to lift at 12 kilometres and the peloton caught all the leaders except Kadri, Guzev and Plaza. At 9 to go it’s all together and time for the brown stuff to hit the fan. The first to attack was Di Gregorio of FdJ, Xacobeo were still on the front of what was left of the peloton, probably around 30 riders, all the stars were there, but Nibali in the Red Jersey only had Kreuziger with him as Mosquera had two men. First to attack was Oscar Pujol (Cervelo) to be joined by Amets Txuruka (Euskaltel). 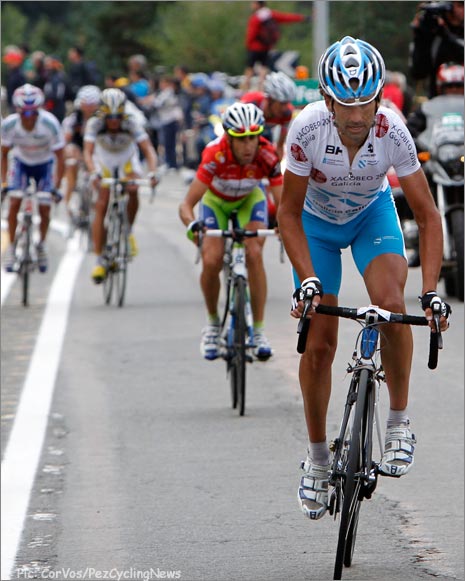 5 Kilometres to Destiny
There was no reaction by the bunch to the two attackers immediately, until Frank Schleck launched himself off after them, he is joined by Mosquera, Nibali, Velits, Roche, Tondo and Rodriguez, Sastre and Danielson were dropped.

Mosquera takes the bit by the teeth and makes another attack at 3.6 kilometres, but at 3 K’s Nibali gets over to him as the concrete road starts. Mosquera forces on through the mass of fans to put more pressure on the Italian. The Galician presses harder and harder on the pedals distancing Nibali again. 2,5 K’s and Mosquera had 13 seconds on Nibali as they hit yet another steep ramp, no team cars here as the climb is so narrow. Roche, Velits, Rodrigues and Schleck were in the next group.

2 K’s to go!
Mosquera was fighting to get the 50 seconds he needs for the win, but with the stage bonus he can win with 40 seconds of a win. Nibali could see Mosquera ahead through the throng of people and motos. As the road surface got worse it looked like Mosquera was suffering although Nibali was also on or near his limit. 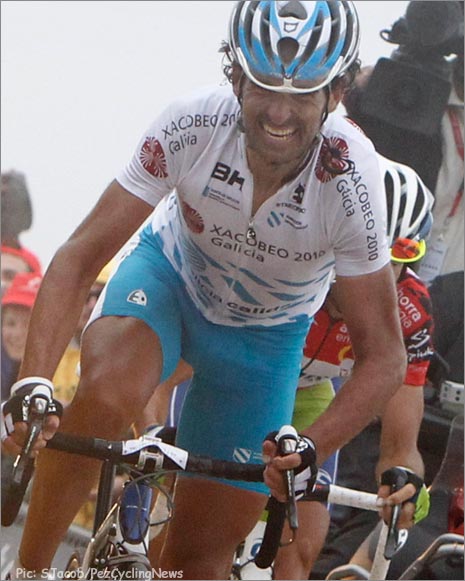 Last Kilometre
All the riders were now in the red zone, Mosquera had 16 seconds on Nibali as the clouds started to roll in at the top of the mountain. The thin gap between the bike mad fans directed the brave Galician rider towards his destiny, but Nibali seemed to lift his speed to close in on Mosquera. Behind Rodrigues attacked Roche, Schleck and Velits. Nibali caught Mosquera just before the line, but Mosquera uses his last ounce of energy to take the stage, but not gain the overall victory, he gave it all he had, but to no avail.

So the hardest climb of the Vuelta has not changed the winner of this race, Ezequiel Mosquera put his cards on the table at the end, but it wasn’t enough to shake off Vincenzo Nibali.

The lower placings stay the same, Velits lost time, but not by enough to lose his place, Danielson was the only rider to drop on GC, swapping with Carlos Sastre.

Tomorrow the race rolls into Madrid, stay Pez’d for the finale.