Race Report: The last rider to stand on two Grand Tour podiums in a year, Alberto Contador, did, admittedly, win both the Giro d’Italia and the Vuelta Espana. Nibali managed a third in May but stamped his card as a bona fide Grand Tour hero at the Vuelta with a smart and gutsy three week show of maturity. Welcome to the winners’ circle, Vincenzo!

The riders roll out of San Sebastian de los Reyes and then into Madrid for 12 laps of a city-center circuit. Everything’s very chummy as the photographers get their shots of Nibali who has opted to stay low-key … no ostentatious color-matching for the Italian. He’s got red glasses and red bar tape, but that’s as far as it goes. Classy! 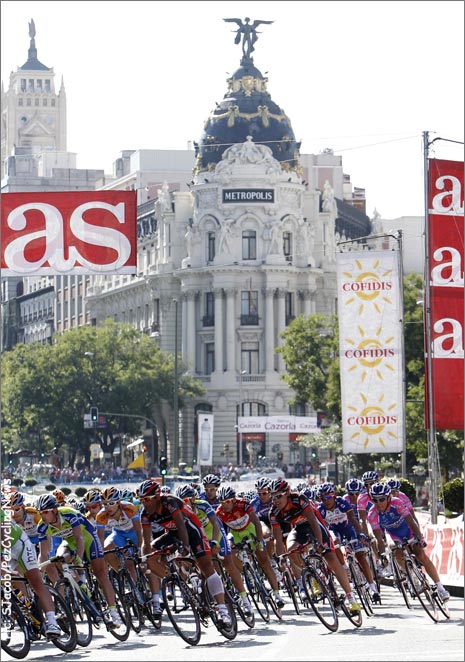 Everything stays together until 19kms into the stage and … surprise, surprise … it’s Mr Dominik Roels from Team Milram introducing Mr Flame to Mr Blue Touch Paper. Roels is sporting a skinsuit today, maybe the team ran out of washing powder? Anyway, big Dominik’s been off the front on a fairly consistent basis in this Vuelta, so any teams out there looking for a reliable escapee, get in touch with him.

Joining up are a couple of other familiar breakaway suspects – Olivier Kaisen (Omega Pharma-Lotto) and Javier Ramierez (Andalucia-Cajasur), with Jurgen Van Goolen (also OM-L) and Gonzalo Rubinal from (Xacobeo Galicia).

By 50kms, over half-distance, the lead is 68 seconds but HTC-Columbia decide to step out the pace and Garmin-Transitions lend a hand bringing things back to 34 seconds. Three laps to go, and the peloton has cut the lead back to 18 seconds. There are a couple of very tight corners on the circuit, including one hairpin at 5kms left, but they’re not close enough to the finish to cause any major problems, or to offer the breakaway too much leeway.

Just two laps to go and it’s all together: the sprinters’ teams, including a few big turns from QuickStep’s Carlos Barredo, have done their job.

Through the bell now, just six kilometres to go and Cavendish is looking comfortable as his HTC boys keep him positioned. Liquigas-Doimo are putting on a show at the front as Ag2r try to bring men up the left-hand side.

Four kms left and Phillipe Gilbert goes for it, but HTC-Coumbia shut him down directly. Now inside 3000 meters left and QuickStep take charge for Wouter Weylandt; Cavendish has got only Matt Goss left with him.

Goss leads Cav out and the sprinters fan across the road. Cav’s sprinting but looking left all the time not for the line. It’s as if he’s a) hoping Goss has enough in the tank to reach the first to take the stage; and b) watching to see where Farrar is. A win for Farrar and Cav needs top five to secure the points title.

Goss looks right and seems to shout at Cav who puts in another burst, but Farrar’s across the line for the win. Cav gets second and secures the green jersey and Allan Davis shows why the Australian selectors gave him a nod for the Worlds by taking third. 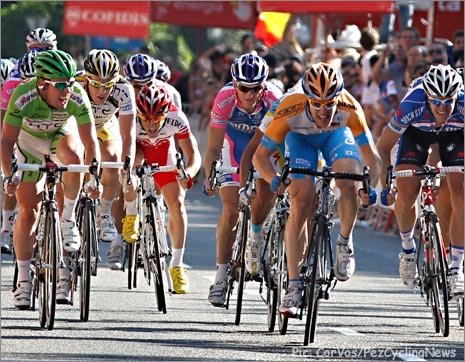 But it’s all about Nibali today. It was a classy performance for the whole three weeks, never panicking when Rodriguez and Anton were taking the red jersey, but using his team and his nous to position himself for the overall.

Congrats to the other winners, too: Mark Cavendish speared the points competition – his first in a Grand Tour; David Moncoutie took a third straight mountains title to emulate some of the greats – Antonio Karmany, Julio Jimйnez and Josй Marнa Jimйnez; Nibali also gets his mitts on the combination prize, but he’ll only have eyes for his lovely red jersey.

Katusha took the teams prize so all that frantic riding yesterday paid off! It was by far the most entertaining podium presentation: DS Dmitri Konyshev and co., brandishing two massive Russian flags as a stunning – and stunningly tall – podium girl struggled to bend down far enough to present the Lilliputian Katusha guys with their prizes! 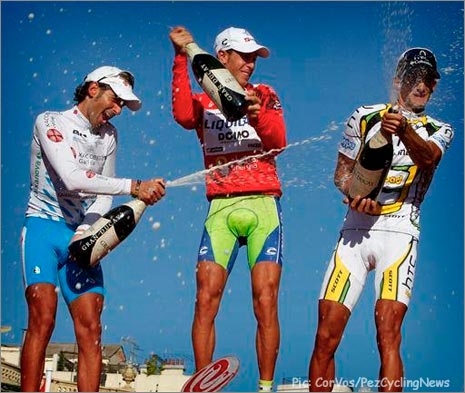 That’s it from the Vuelta, but keep it Pez for theWorlds, the late season Classics and a whole lot more. Don’t touch that dial!

Toolbox: The Other Side of Competition