Race Report: After the arduous profiles of the last two days, the sprinters got their chance in Stage 5. Not to say that today was an easy one, but it didn’t finish with a final kilometer where the top speed was wrought by the little ring. The big rings got a good workout today as we were treated to a beautiful sprint on the streets of Lorca.

The nearly 200 kilometer stage was led for most of the day by a quartet of daring pedal crushers: Pierre Rolland (BBox), Jose Vicente Toribio (Andalucia), Arnaud Labbe (Cofidis), and David Gutierrez (Footon). They tromped out to a solid gap, and so the stage was set for a typical sprint stage in a Grand Tour: break goes, break gets big gap, sprint teams take up the chase, chase is timed to perfection – cue nap.

Today’s menu includes 200km from Guadix to Lorca, with a dessert for the sprinters.

The break is swallowed up with plenty of time to go, so the pace goes up even more to keep the attackers at bay in the waning kilometers of the day.

Inside 10k to go HTC-Columbia is to the fore. Mark Cavendish is looking for his first win at the Vuelta, and this seems a good day to open up his Spanish account.

With 6k to go, Lars Bak has his head down and he’s driving hard, while Sky has a nice spot reserved at the back of the peloton. The British super team has had a terrible go of it so far, but each day should be a bit better for the boys in black (with a little bit of blue). 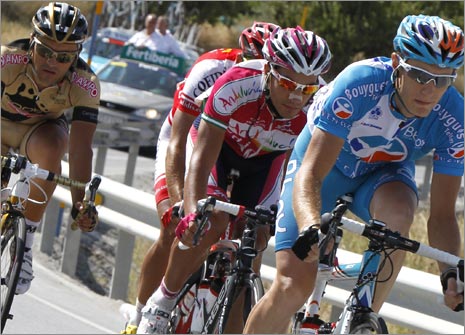 FdJ’s former Tour of Georgia stage winner, Gianni Meersman, gives the HTC train a bit of a respite and indicates his team’s intentions. The Belgian puts in a monster pull in hopes of helping the Belorussian Hutarovich to a second stage win. Meersman finishes his work with a correspondingly monster swing off to the right and calls it a day.

HTC-Columbia resume their work on the front, most likely thankful for the brief interlude in their largely solitary mission of keeping the pace high for Cav. Of course, there are few teams that want anything to do with the 10k to 2k to go section of the day, so HTC takes the reins and drives hard. That’s not to say that HTC have been the only team on the front – Lampre worked hard earlier in the day to put the break to rest and ensure that a rare sprint will be had. The same goes for most of the other top teams.

With 4k to go, Velits hits the front and rocks, rolls, and throttles it to perfection, but Lampre is massing up right behind and the swirling maelstrom is brewing behind the tiring legs of the HTC-Columbia leadout.

Inside 3k to go, a big roundabout is taken care of with no worries, and it’s still the white and yellow of HTC, but now Lampre, HTC, and QuickStep are merging together. Lampre puts in a strong effort to take control with Hondo noticeably doing his best to shepherd embattled Tour de France Green Jersey winner, Alessandro Petacchi, to an ideal position.

Inside 2k to go, Lampre has two on the front and Hondo/Petacchi together, a little bit behind. QuickStep is noticeable on the front – they must be feeling good for Wouter Weylandt.

Heading under the 1 kilometer to go banner, and there’s no real order to be had in the field. Each team with any hope seems to be sending a rider to the front to keep the pace high, while the sprinter and his leadout man do their best to stay tucked behind.

FdJ is once again on the front as the meters tick away rapidly, while Hondo knocks a QuickStepper out of his way at the behest of Alessandro Petacchi. Like normal, the next question is: where’s Cav. The world’s best sprinter has a habit of either being safely tucked in behind his HTC train or completely invisible. Today was one of those invisible days.

Inside 400 meters to go, Hondo makes his move, up the middle, and oh yes, there’s Cav. Cav goes up the barriers on the far right side of the road, and immediately gets a gap, but as soon as the camera draws back, it becomes apparent that the Manx Missile might have fired a wee bit prematurely. 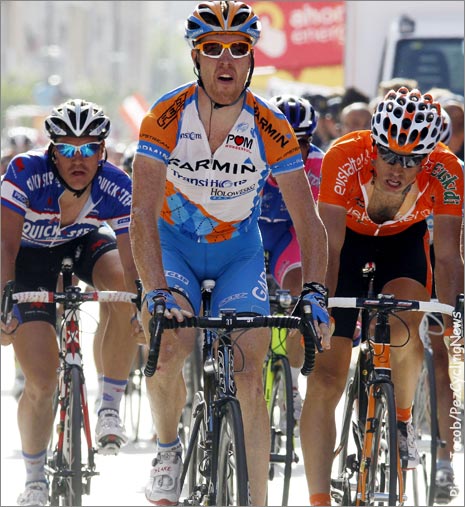 A nice win for Farrar, outsprinting Cavendish fair and square.

Inside the final 100 meters, Cav is still ok, but Farrar comes up strong and as the realization that he went at least 50 meters too early, Cav begins to fade. Farrar digs that little bit more, comes around the fading rider from the Isle of Man, and as Farrar pulls ahead, Cavendish calls it a day.

Tyler Farrar’s dream season continues with a great win in Stage 5 of the Vuelta, while once again, Cavendish appears to be suffering through a difficult first week of a Grand Tour. Euskaltel’s Koldo Fernandez nabbed a nice runner up spot about half a bike behind Farrar, but that’s all that he could muster.