Race report: The Vuelta doesn’t do flat very well. Uphill – fine. Downhill – check. Rolling terrain – you got it. But flat? Nope. It was another day where the profile hurt and with a nasty second-category climb towards the finish no-one expected to see the pure sprinters in the shake-up. So we had the win going to a Classics fastman …

To go with his Tour de France stage win and green jersey not that many weeks back, it’s now another Vuelta stage win for Thor Hushovd’s collection. The Norwegian sprint God powered over the Alto de la Cresta del Gallo in the wake of sterling work from his Cervelo Test Team boys – the squad might be going at the end of the season, but the guys are still fighting.

Losers today were Katusha who also worked themselves to the bone, but couldn’t get rid of Gilbert and put the leader’s jersey on the shoulders of their boy Joaquin Rodriguez. Likewise, Pippo Pozzato was unlucky/got boxed in/made an arse of it when it came to the dash for the line. You can delete the options depending in how you view Katusha’s perma-gelled Italian. 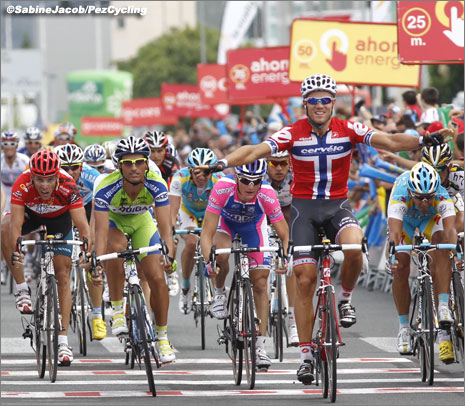 Previously on Vuelta stage six …
Milram’s riders have got a lot of work to do at this Vuelta, not necessarily for the team, but for themselves. They’ve been active already this week – with the sponsor pulling out and no word of a replacement, it is imperative to go out and win a contract somewhere else. Markus Eichler is off inside the first four kilometers.

He’s solo and a minute clear of BBox Bouyges Telecom’s Freddy Bichot and Juan Javier Estrada from Andalucia-Cajasur, but he decides to wait and the trio make friends.

Cofidis have been given a b0ll0cking by their DS for missing the break again and get to work as the gap edges out over 9 minutes. They succeed to a point and the lead is down to just 5’40” as they ride through Cieza, hometown of the late, lamented Mariano Rojas. One of the rising hopes of the Spanish peloton, Rojas was killed in a training accident back in 1996. His little bro’ Jose Joaquin Rojas is no mean rider himself.

25kms to go and Katusha and Liquigas have hauled the gap back to 1’59”. Katusha are desperate to get Joaquin Rodriguez into the overall lead, and they reckon the second category climb of the Alto de la Cresta del Gallo peaking with just 17kms to go could be the springboard to jettison Phillipe Gilbert.

The Russian squad slice the leaders’ advantage to ribbons with a brutal acceleration. The now demulleted Vladimir Karpets did a huge job today. On the up-slope, Alexandr Kolobnev drags the peloton past the escapees one by one, first Estrada, then Eichler and finally Bichot.

Down the twisty descent, helter-skelter, and Omega Pharma’s Jean-Christophe Peraud takes a tumble. Pippo Pozzatto pulls ahead and it’s leader Gilbert who’s onto his wheel. Shades of their long-standing Spring Classics rivalry all over again.

Once they stop messing about, Dmitri Fofonov goes for Astana; 12kms to go and he’ll have no chance to stay clear. Cervelo (for Thor Hushovd) and Katusha (for Rodriguez) are keeping his gap to the minimum and sweep him up with 7.4kms to go.

Next up is Grand Tour serial escapee Carlos Barredo – surely old Carlos will actually pull it off one of these days but the attack has an element of futility.

5.5kms to go and Carlos Sastre is having a chat with Joaquin Rodriguez … riiiight at the back of the peloton, a dangerous place for a chinwag.

3kms to go and the field sweeps round a massive traffic island, more of a traffic continent really. No more obstacles on a pretty straight run-in to the line. Sprint is now officially on!

Omega Pharma-Lotto hit the front to keep Gilbert out of anything nasty. Astana and Liquigas are fancying things for Allan Davis and Daniele Bennati respectively.

All together under the red kite and Gilbert’s boys are trying to set him up, but he’s left in the wind too early, and he switches desperately across the road from left to right …

… Hushovd hits the front and Bennati can’t pull him back. Classy stuff from Thor, and Gilbert nabs sixth to retain his overall lead.

Loads more to come later from Agent Al Hamilton at the Vuelta, so keep it Pez!

Vacansoleil Up Close With Frank Kwanten