Race Report: It’s a sad start to the first big mountain stage of this year’s Vuelta. Team Sky’s masseur Txema Gonzбlez passed away yesterday and the distraught team and staff have all left the race. There’s a minute’s silence to remember a universally popular personality in the cycling world, and PezCyclingNews sends our condolences, too.

The world keeps turning … Txema won’t be forgotten, even with five ferocious climbs to hurt the bodies as well as the minds of the remaining riders in the race. They will be hammering up the Puerto de Onil (third category), then the three consecutive second-category climbs of the Puerto de Tudons, Puerto de Torremanzanas and Puerto de la Carrasqueta before crossing the thigh and calf-straining 11.5% slopes of the first-category Alto Xorret de Catн. 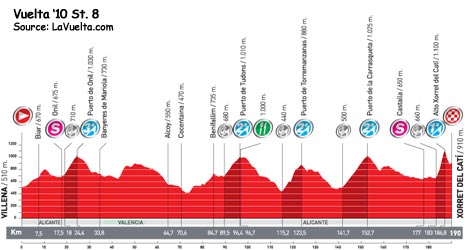 Even if it has pitches up to 20%, the top of the Xorret de Catн isn’t the end of the suffering. Total concentration is needed for a sharp descent and then a final one kilometre drag to the finish line, so we might see things changing right up to the bitter end.

Attacks aplenty early on, but there’s a big pile-up involving race leader Philippe Gilbert that sees a constant stream of riders dropping back to the doctor’s car. It’s so significant that the first sprint of the day is cancelled. 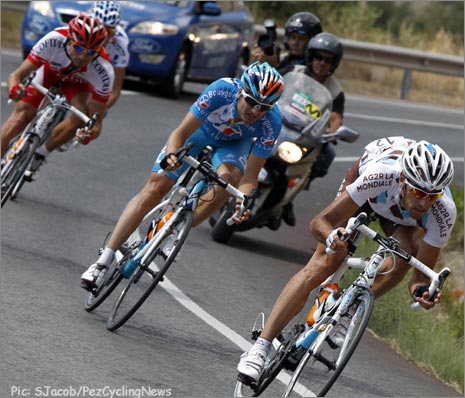 45kms in, and two-time Vuelta mountains winner David Moncoutie is off the front for Cofidis. BBox Bouyges Telecom’s Johan Tschopp goes after him, and then Xacobeo-Galicia’s Serafin Martinez who fancies hanging onto his lovely white-with-blue-dots mountains jersey.

Next across are Astana’s Assan Bazayez and Ag2r’s Jose-Luis Arrieta, making the break of the day. It all settles down behind and the lead shoots out towards the six-minute mark as they reach the Tudons climb.

Over the Torremanzanas, and the lead stretches out a bit more on the descent – seven-and-a-half minutes with 48kms to go.

Omega Pharma-Lotto have been on the front, but Cervelo Test Team and Liquigas-Doimo replace them to start setting things up for their big men and the lead goes south rapidly, with three minutes vanishing in just ten kms. 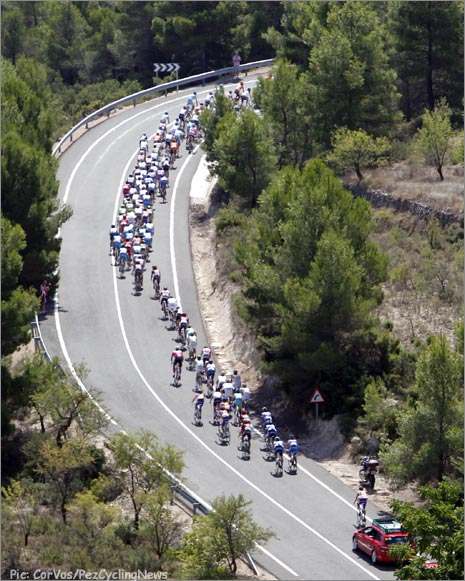 Serafin Martinez leads them over the Carresqueta with Moncoutie just behind. Cervelo have succeeded in separating the wheat from the chaff and split the field up, making the access to the Xorret de Catн a bit more straightforward. Job done, they ease off and the break’s advantage goes out again.

15kms left and Moncoutie and company have 5’32” – looks like this quintet will make it to the line ahead of the peloton; well, some of them at least.

12 clicks left and the front five are bopping along out of the saddle, looking fresh.

10kms to go and Caisse d’Epargne are on the front of the ‘big hitter’s peloton’, as the brass bands belt out a couple of tunes on the roadside.

6kms to go and the lead five are now on the Xorret de Catн with 3 minutes plus on the main field which has sped up spectacularly under pressure from Liquigas. Moncoutie and Martinez are watching each other thinking about the stage and the mountains classification.

Tschopp’s got previous experience after his fine stage win in the Giro this year, Arrieta has been around the block a few times and has won a Vuelta stage before and Bazayev has been coming into form with a strong Tour of Poland. Where’s your money?

In the peloton, Zaugg (Liquigas) blasts off and gaps everyone until Caisse d’Epargne’s Rigoberto Uran (amusingly called Uranus by the Vuelta coverage!) zooms past him.

Up front, Arrieta is in difficulty as they hit a pitch of 22% – five kilometers to go! Tschopp ups the pace and now Serafin Martinez looks like he’s going backwards. Tschopp blows … and Moncoutie pushes on with Bazayev hanging on for dear life.

4.7kms left … it’s only been a few hundred metres, but Moncoutie has pedaled smoothly away from the rest and is going solo.

In the main field, Sastre goes for it … but the main guys aren’t letting him go. Gilbert is clinging to the red leader’s jersey as things stand.

Sastre’s effort has pulled a small group clear and the field is shredding! It’s Anton, Nibali, Roche, Tondo and Joaquin Rodriguez with the veteran.

It’s Katusha’s Spaniard who goes next with Nibali in his wheel. Tondo and Anton get up to him as they pass Uran.

Rodriguez looks back, sees Sastre coming … and flies clear. Back together, now Anton goes! He can’t get a gap. The changes in pace allow Sastre to diesel engine himself back up.

Moncoutie ploughs on alone, cresting the Xorret de Catн and off downhill. He’s got a minute on the chase as Nibali pushes it on behind. It’s a fine win for the veteran Frenchman who has plenty time to enjoy his win as he cruises up to the line. 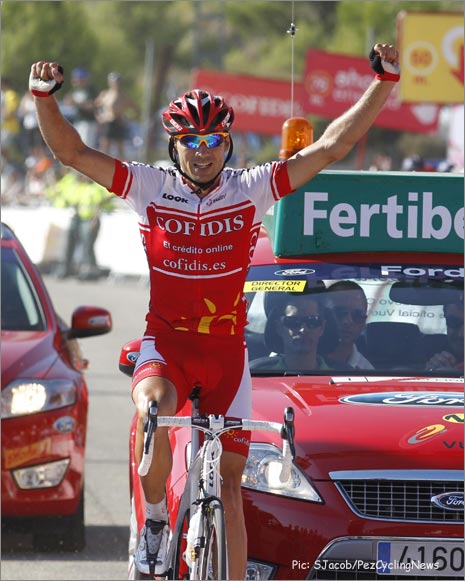 Tschopp, Arrieta and Serafin Martinez come in together 53” back, and then the dash for the line from the heads of state. Rodriguez gives it the gun to take the leader’s tunic and puts daylight between himself and Nibali (6th) and Anton (7th).

The race comissaires have a different interpretation of things and give them all the same time, meaning that the Euskaltel-Euskadi man will have the red jersey tomorrow. I’m sure Rodriguez and Katusha will be highly unimpressed by that.

Gilbert eventually loses two minutes plus to Rodriguez and co, but it’s no disgrace to give up his leader’s jersey on a day like this.

Things are starting to look very interesting with such microscopic time gaps, HTC-Columbia’s youngsters hanging tough in the top ten and even ol’ Carlos Sastre isn’t out of things.

Loads more to come later from Agent Al Hamilton at the Vuelta, so keep it Pez!