PEZ On The Scene: Vuelta Start Minus 2!

Roadside Preview: Yes, it’s Vuelta time again, and as the race starts just down the road, I had a leisurely first day sorting a few things out, meeting old friends and looking at race bikes. The day was perfect and washed down with a “Menu del Dia” it couldn’t be bettered, except maybe a race thrown in would make it more interesting! Lots of that to come over the next three weeks.

My first day at this year’s La Vuelta a Espaсa was much easier than previous editions. No long drives and no airports to queue up in and be delayed by broken planes and the like! Just a 20 minute drive to the Oficina Permanente, which was in the grounds of Tera Mitica theme park. 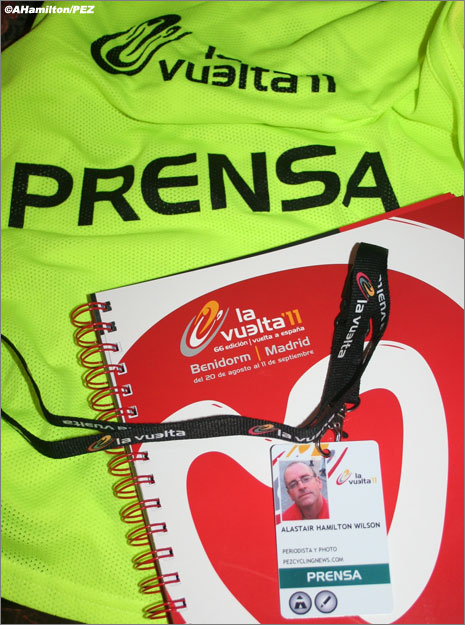 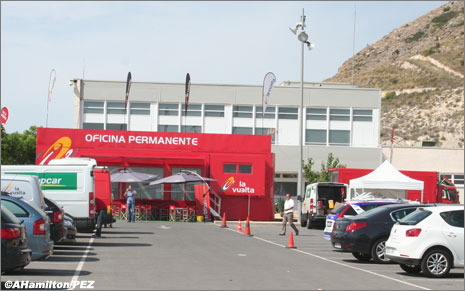 On the way there, I spotted the Euskaltel-Euskadi team on their road bikes, Garmin-Cervelo, on the other hand, did a circuit on TT bikes followed by road bike sessions. All the teams were out and about, but the 36єC temperatures wasn’t to many riders’ liking! 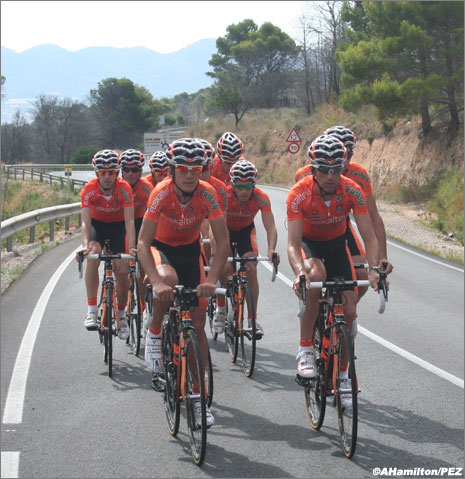 After I received my accreditation, route books, car stickers and photo bib, I thought it would be a good idea to see what was going on in the “Sala de Prensa”…nothing! First time I’d seen it empty, I guess it’s early days yet. 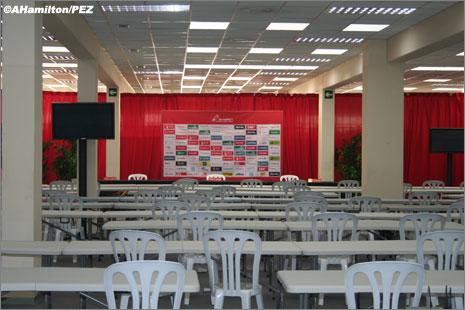 Outside the Guardia Civil, moto riders were cleaning their bikes; these guys (and 1 girl) love the job of guiding La Vuelta round Spain, and it looked like they love their bikes too. Three weeks astride one of those BMW’s – you would need to love it! 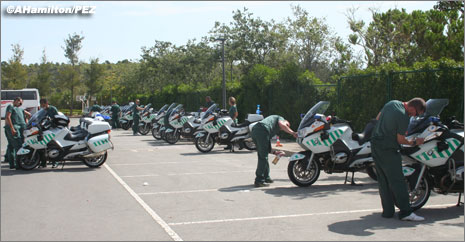 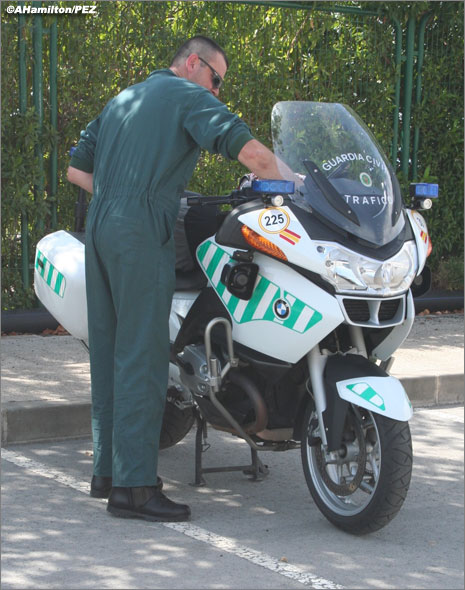 On Wednesday, I had received a text from Alan Buttler, Mechanic with RadioShack and good friend of PEZ. As always, he was happy that we visit him for a chat about old times/new times and have a beer at the team’s hotel. RadioShack were sharing the Sol Albir with Sky and Garmin-Cervelo, Rabobank should also have been there, there was room space but nowhere for the trucks, buses, campers, and team cars to park, so they were down the road in the Albir Playa. 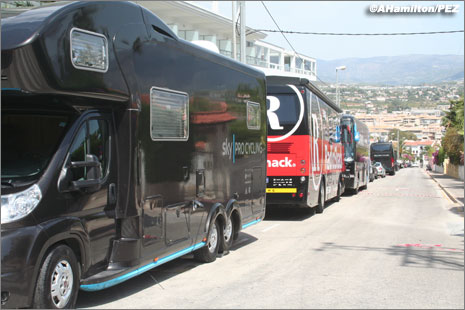 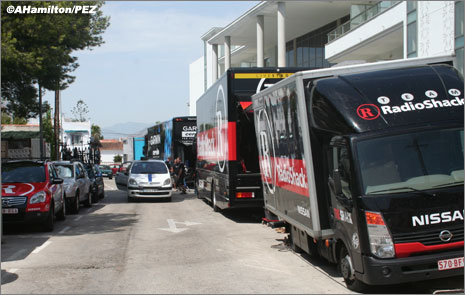 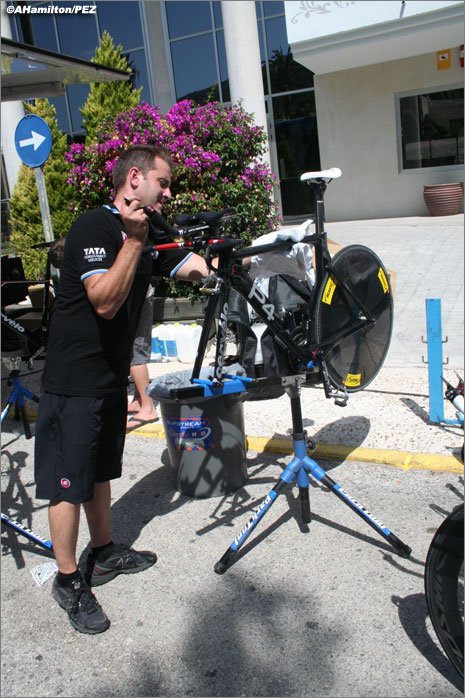 Alan and I were sorting out the beers and the world of cycling and bikes. 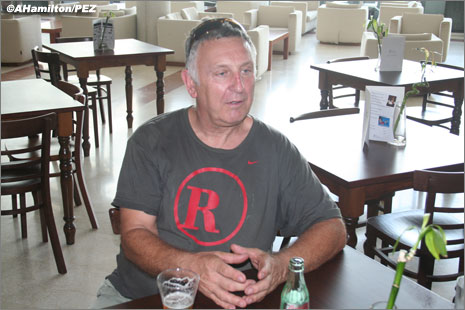 As always Alan had the inside line on what was going on – where is Cav going? Who is leaving RadioShack? What’s about GreenEdge? All good stuff, but the professional that he is no names were mentioned…we will all find out soon enough! But Klцden and Brajkovic were up for a good Vuelta. Of course, the Slovenian had been having travel problems coming from the Tour of Utah and had no clothes and no bike. But Alan had it covered and had brought an extra bike and the team still had his suit case from the Tour de France. He had been told to open the case in his room as it had been closed for a month! 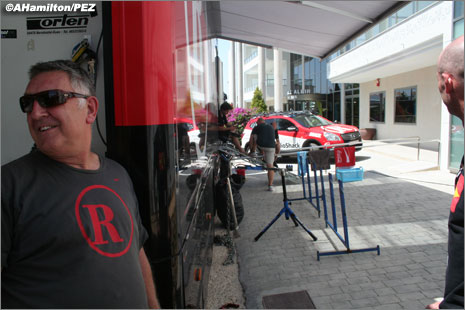 As I was making my farewells; Garmin’s Tyler Farrar and Johan Van Summeren came in after a hot ride, it was around 36єC in the shade and a bike computer left out in the sun read over 60є!!!! Both were mobbed by local kids wanting autographs and bottles. 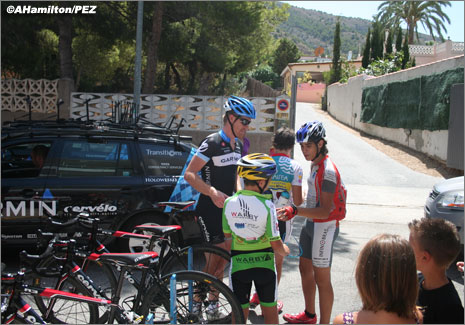 That guy Van Summeren is tall and lean! 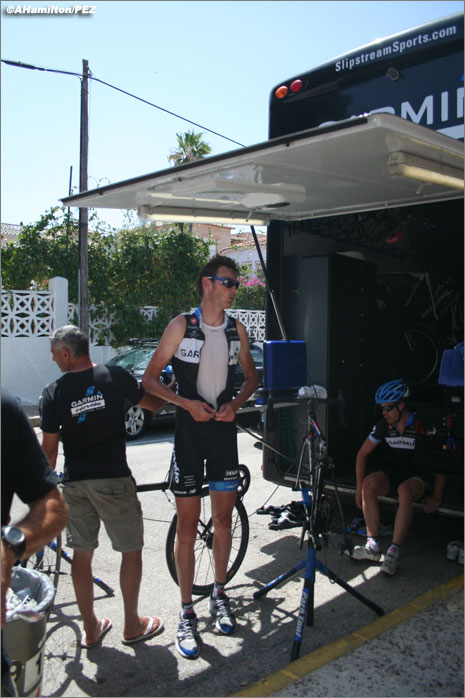 On the way back home, I passed the Liquigas guys primping the Cannondales. They had done the SLICE time trial bike and where cleaning the road bikes after the team ride. 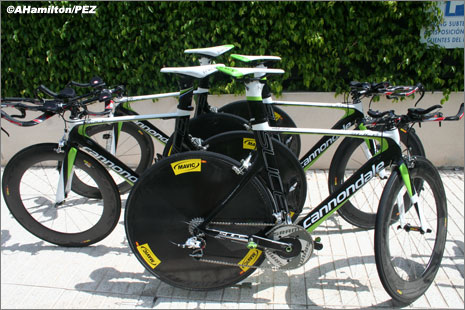 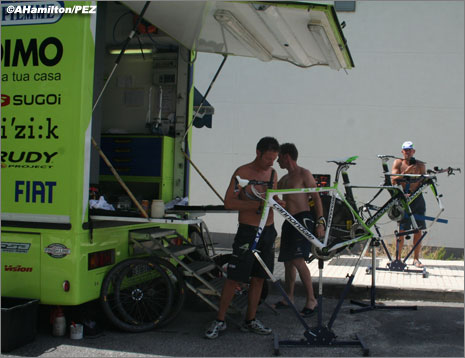 Next to them were Rabobank with their Giants, no time trial bikes, just the road offerings; amongst them was Luis Leon Sanchez’s bike with its race number from the San Sebastian Classic. My favourite was the more colourful team colours. 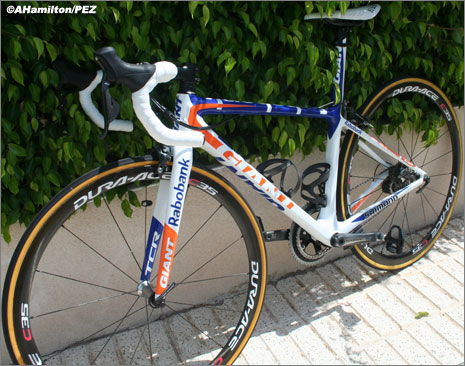 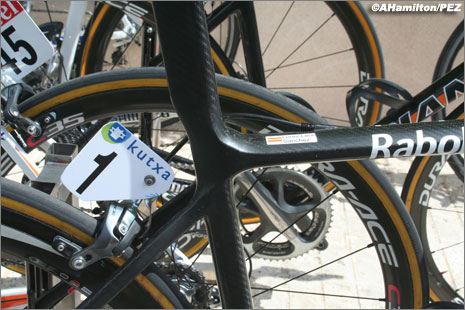 The Rabobank mechanics were feeling the heat as they glued new tubs on…I just hope that guy has something on under his apron! 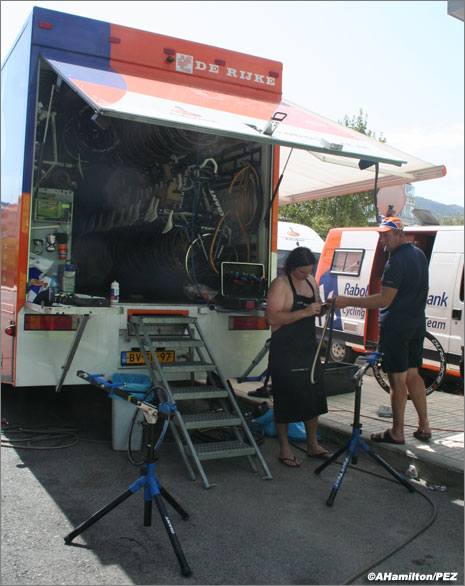 Next hotel had BMC, HTC, and Leopard-Trek, but only Leopard were out on the street doing their stuff. For all the money Trek put into the team I must admit the bikes do look nice. 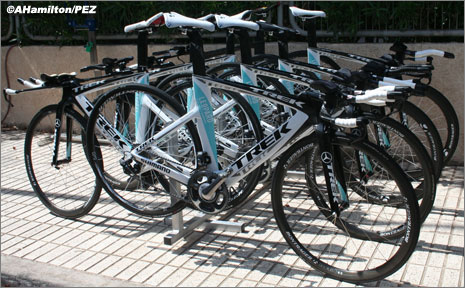 And this photo below is the stem that Fabian Cancellara will be looking at in Saturday’s team time trial. 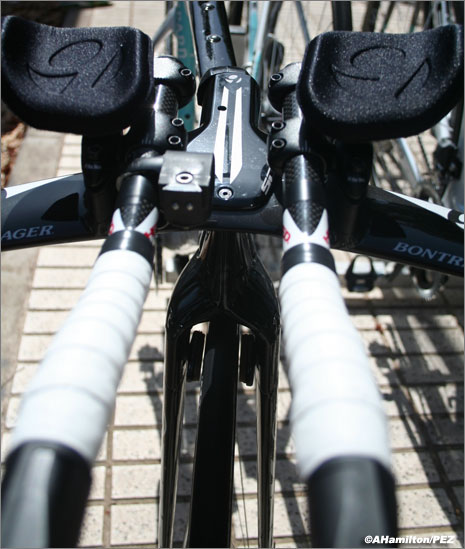 Well that was Vuelta Day minus 2 under wraps, it just left time for an 8Ђ four course meal at one of my local hostelries (cafe-bar ensueсo). Now how to add this to my expenses tab? 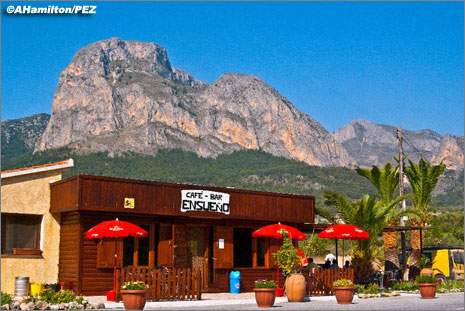