Roadside: At last; stage 1 of the 2011 La Vuelta a Espaсa has rolled off down the ramp and the first results are there to be seen. Leopard-Trek had a great ride and Sky had a terrible one! I on the other hand had a very nice day at the beach, but it was very hot down there and not just the weather, but also the racing!

In 1987 La Vuelta a Espaсa started with an individual time trial in Benidorm on a very similar course to today’s, except for the first leg up to the theme park, that’s because Terra Mitica and those roads didn’t exist in those days. Sean Kelly won that day.

Today was a little complicated for the press as the finish was quite far from the start and there wasn’t any way of getting there unless you were lucky enough to find a seat in either a team car or one of the race direction cars. I didn’t get either, so I also didn’t see the finish or the podium. It had been suggested to me that I could walk to the finish! What, 5 kilometres in this heat! And then 5 kilometres back! I don’t think so! This is the temperature my car said before the start as I got to park it outside my favourite beach cafй; Yago. 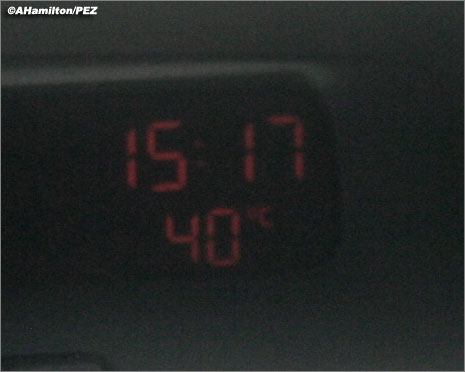 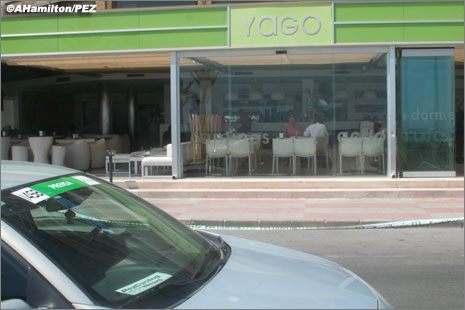 I managed to have a chat with Alan Buttler of RadioShack who was setting up the bikes for the rider’s warm-up. The riders had told him they thought the circuit was technical and a little dangerous in places and more importantly very hard! 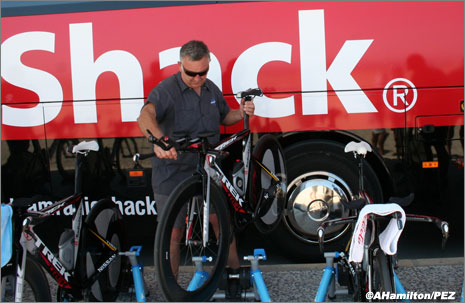 Next bus down was BMC, team PR; Sean Wiede was asking me more questions about the course and the press arrangements than giving me any answers. Apparently the BMC team had gone for a slow lap followed by a near race speed circuit, but they were only coming back now, so we didn’t have any opinions yet. 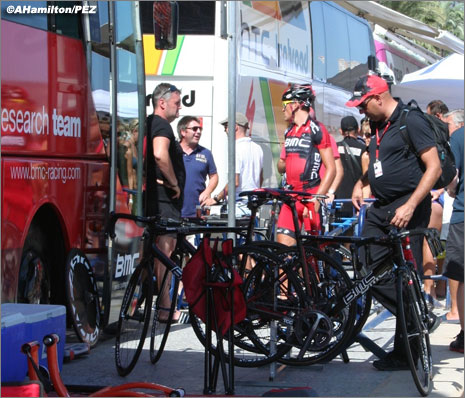 The circuit was closed at 3 o’clock for the teams to try it out. This is probably the hottest time of the day, which wasn’t so good for the riders; some rode a slow lap with their skinsuits round their waists. The ramp looked very empty at this time of the day, but soon changed as the first team; Skil-Shimano lined up for the off and the local dignitary cut the ribbon. 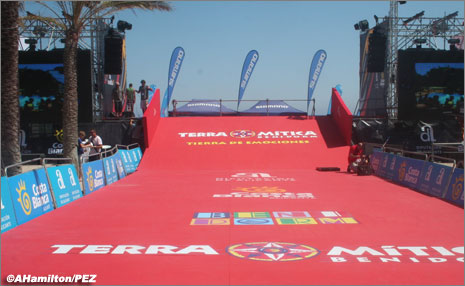 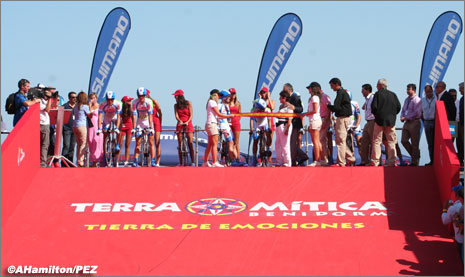 Skil-Shimano was soon into their stride and at the finish they put in a good enough time for 8th in the same time as Omega Pharma-Lotto. Next out the box was Garmin-Cervelo, fast enough for 9th. 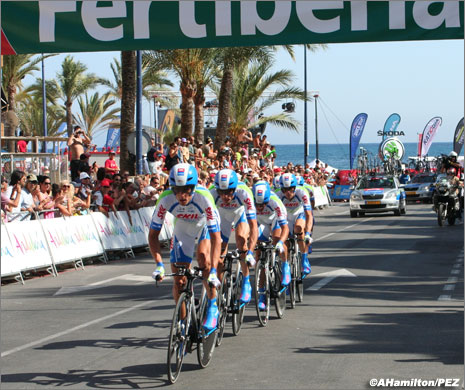 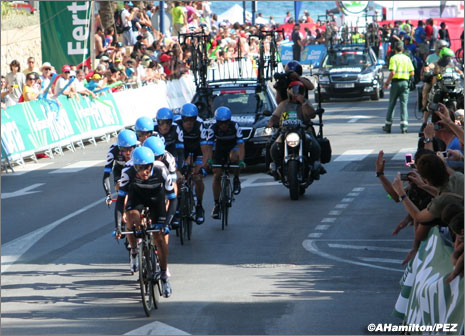 Further round the course, after the climb and the dodgy descent, Garmin-Cervelo was having trouble, Andrew Talansky had broken a chain and Dan Martin was last man and breathing out of every orifice! 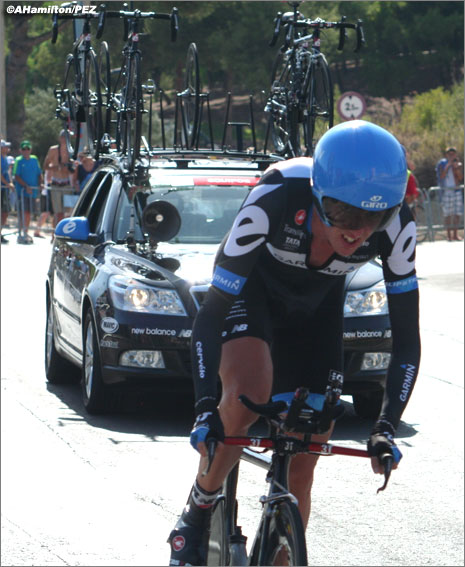 Further round the course towards the beach; Quick-Step were one of the few teams with a full complement of nine riders, 6th in the end was not a bad performance for the Boonen men. Marc De Maar; the Curacao champion was a little off the pace though. 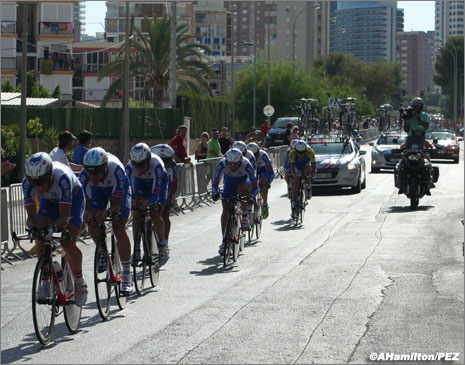 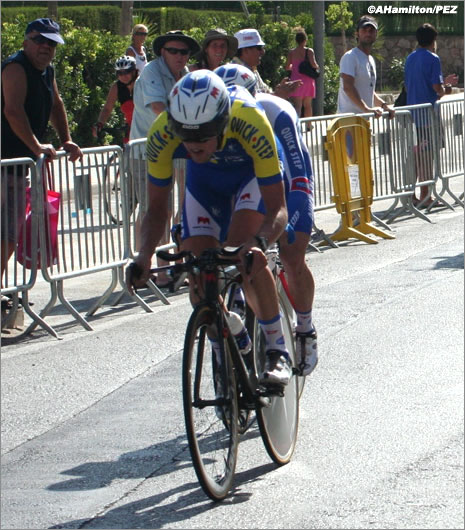 Fourth fastest team; Astana had lost one man, this didn’t slow them much, but there was a bit of pushing at the back! 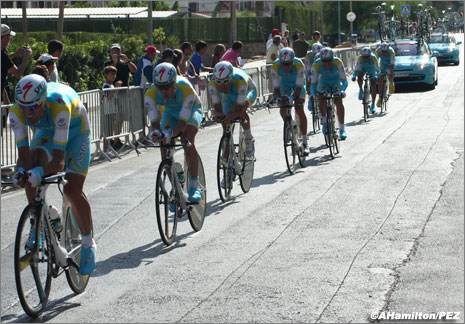 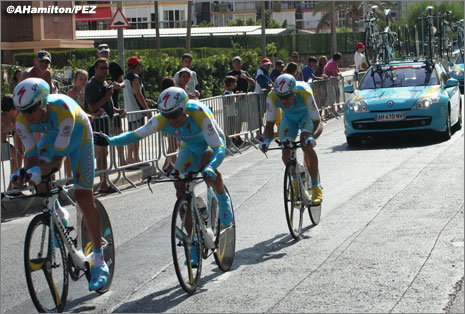 This guy wasn’t going to give up on his “pipas” just for a bike race! 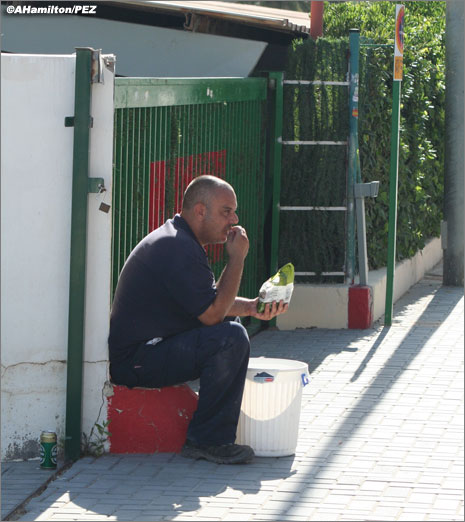 Coming out of the sinking sun, the winning team of Leopard-Trek still had six riders; at the end of the stage they had the overall lead with Jakob Fuglsang. 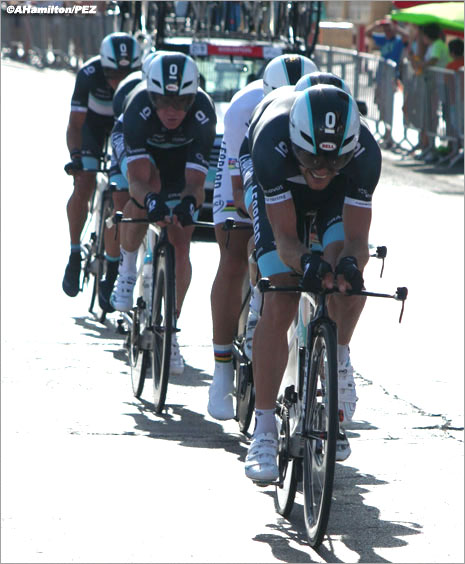 Back at the start ramp; Sky were beginning their race of doom, a touch of wheels caused a crash and on the beach front they were down to four riders. They needed five to finish and had to wait for Xavier Zandio and Sky finished a disappointing 20th. 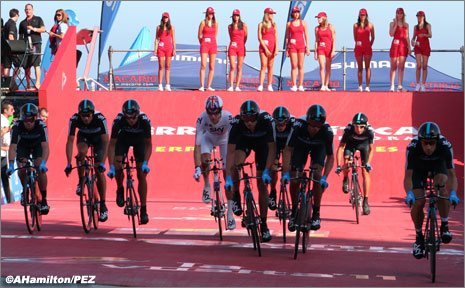 Lampre-ISD were not doing much better as their man Marco Marzano needed a rear wheel change metres from the start line, he was still on the ramp, he finished fourth from last. 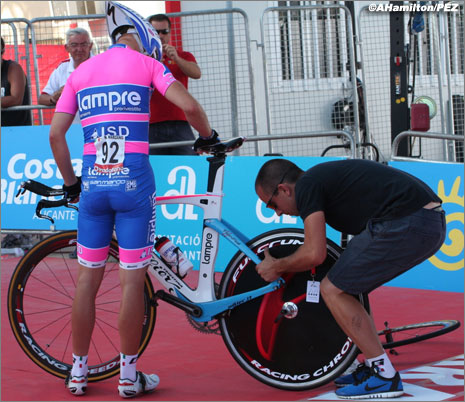 Last team off was Liquigas-Cannondale with last year’s winner Vincenzo Nibali, he was looking very confident and the team led through the 7 kilometre time check and finished only 4 seconds behind Leopard. 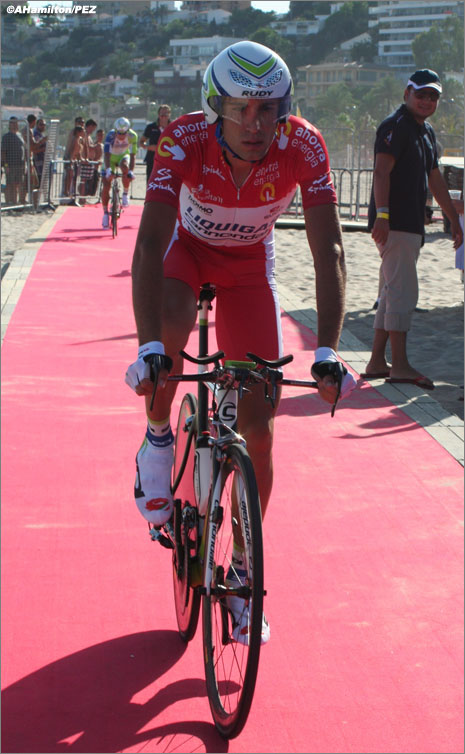 It’s all looking good for Vincenzo! 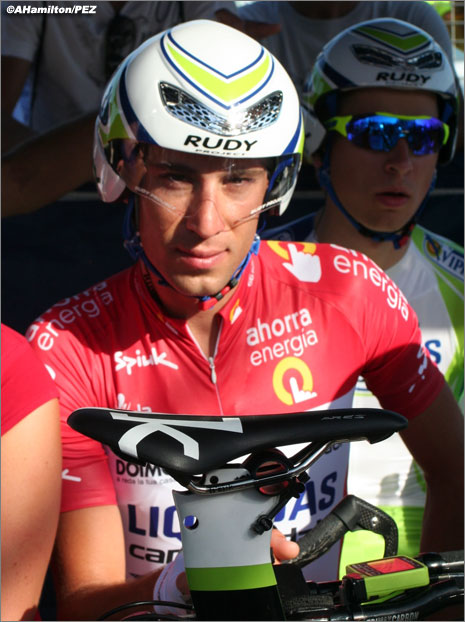 It just left me time to get some nibbles and watch the finish on the big screens. Tomorrow is a more normal road day. Roll on La Vuelta! 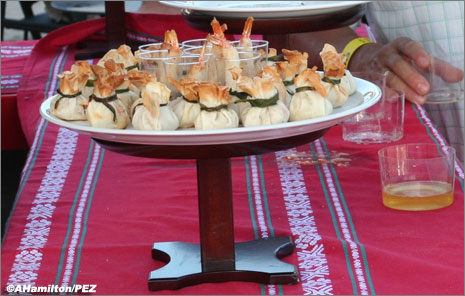 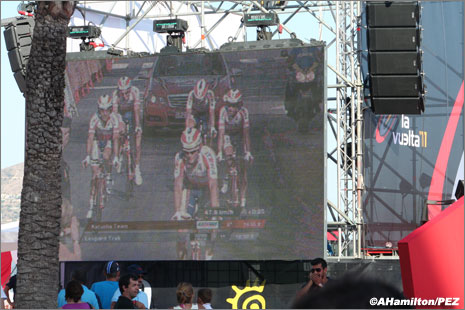