Roadside:It’s still hot here in Spain and the racing doesn’t look like it will cool off either. It’s not all fun and games following a bike race you know! No lunch, constant air-conditioning and driving like a rally driver to stay with the action has its draw-backs…I wouldn’t swap it for anything!

If you have read my Roadside reports in the past when I have been to Murcia you will have gathered that I’m not too keen on this area of Spain and today wasn’t any different. The views are not very inspiring; it’s as dry as the Arizona Desert and those roads! My car suspension and steering is rattling like it did last time I was here. Murcia is a place to pass through on the Autovia. Anyway, more on Murcia later. 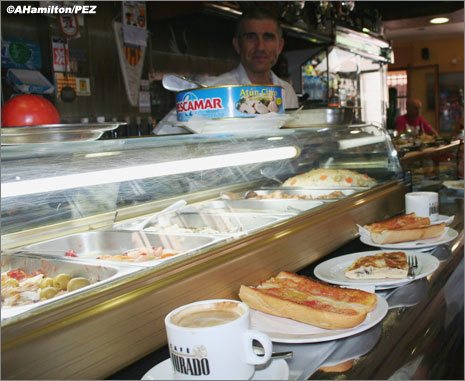 The start in Petrer was a little over one hour’s drive away, so with a 13:25 stage start time I had time to drop into my local cafй/bar to talk Vuelta and have breakfast. Mine host; Javi wasn’t impressed with yesterdays stage start in the neighbouring town of La Nucia. They should have started at the sports centre, not in the middle of the old village where there was not enough room! 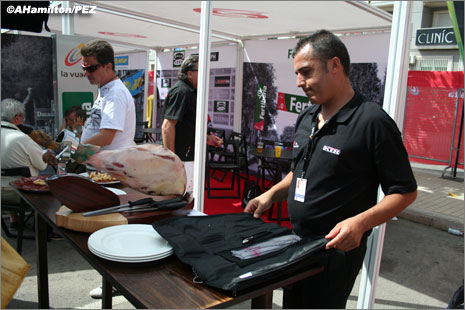 Next stop was the race village, Petrer is just inside the Valencia Region, but you could tell you were near Murcia as the road surface was starting to crumble at the edges! At the Start village it was business as usual. Time for a drink and to stock up with fresh water. The Jamon Serrano guy was setting up with a new leg and sharpening his knives ready for the art of cutting perfect slices. 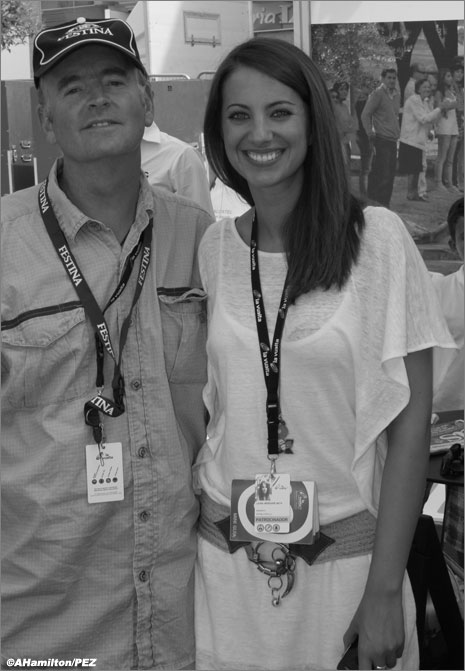 I had one very important job for the morning and that was to get photo of myself with Laura Meseguer who is a writer and photographer for Spanish magazine; Pedalier Pro and you might recognise her from Distracciуnes Del Dia over the last few years. 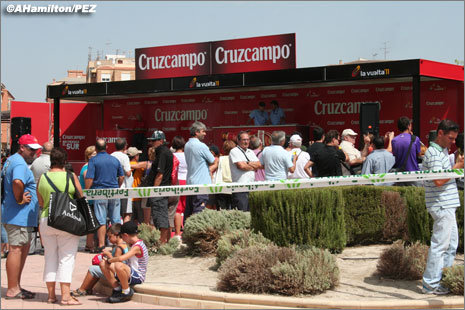 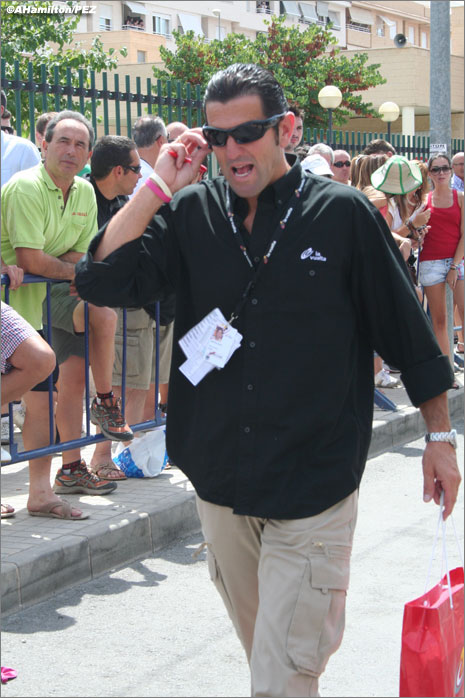 Back at the sign-on trailer it was the usual chaos and Race Director; Abraham Olano was sorting things out on the move, he does seem calmer than a few years ago when it looked like he would have a coronary at the team’s presentation. I actually managed to look at a bike; this is Carlos Sastre’s Fuji with its Spanish chain. 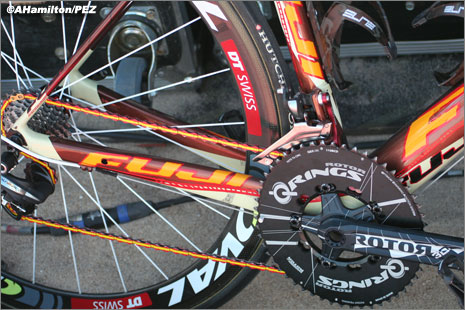 The plan today was to drive out in front of the race to take in the sights and photograph some local delights. Possibly have some lunch before stopping at the 3rd Cat climb of the Alto del Berro and then get in the back of the team cars to follow the course to the finish in Totana, where the peloton had a 22 kilometre circuit. This all worked out perfectly…except the lunch bit! First surprise of the day was a police helicopter landing on the road in front of us, the car below the heli must have got a fright! 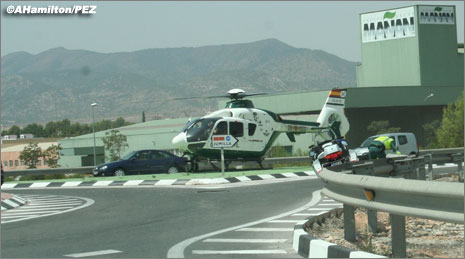 The views of Murcia are, as I have said, not the best, but they are quite stunning in a minimalist sort of way! 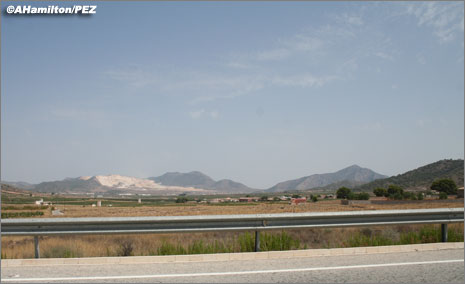 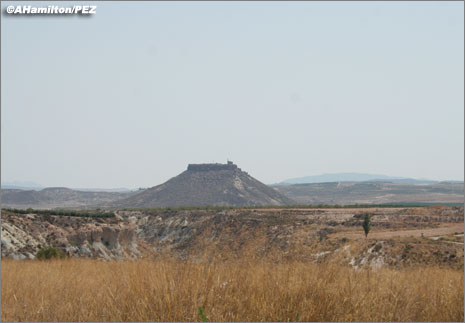 There are also a lot of castles around here; I wouldn’t want one in my back garden though! 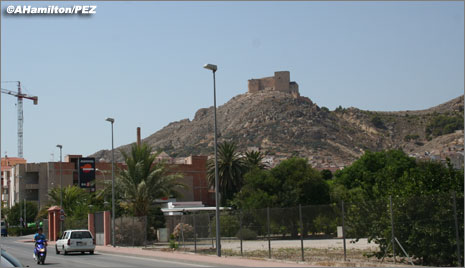 The feed zone was just before the village of Pliego after around 95 kilometres, the soigneurs had all the cars set out nicely as usual, this was making me hungry, but there was nothing to see but a long straight road and the mountains in the distance…no lunch for me then. 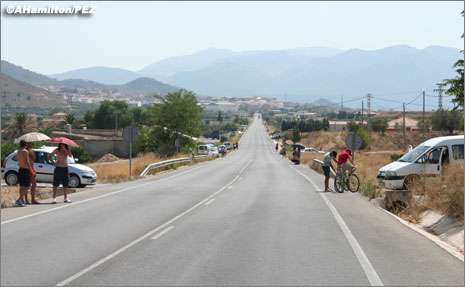 Up on the climb the four leaders had four and a half minutes on the bunch, RadioShack’s Markel Irizar took the climb points. 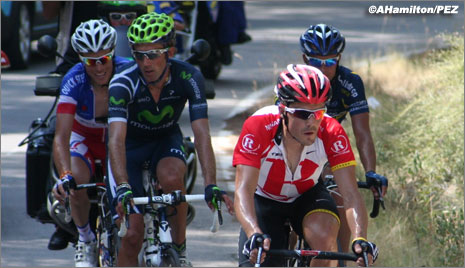 The bunch was being towed up by Leopard-Trek trying to protect the overall lead of Daniele Bennati (which didn’t work!). 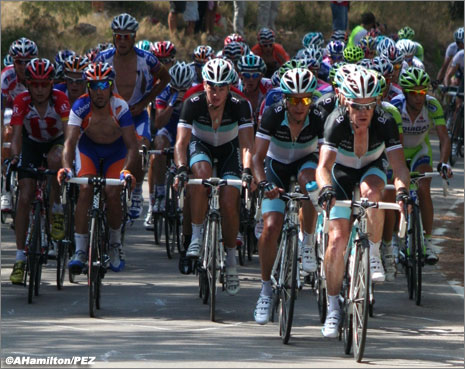 Mark Cavendish was off the back with some team help he got back to the bunch in time for it to split again on the climb of the Alto de la Santa. 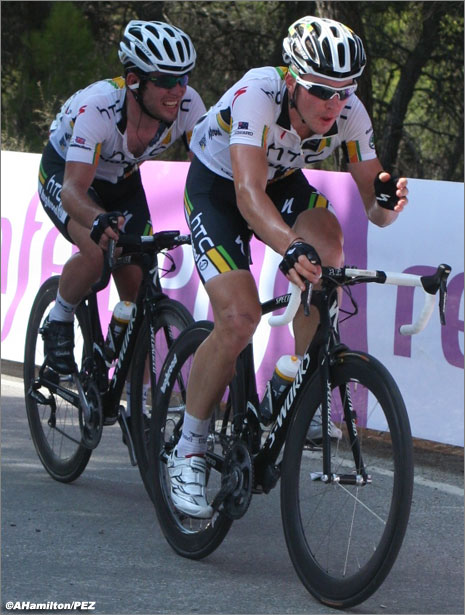 The drive down to the finish in Totana was quite interesting, I tucked in behind photographer Sabine Jacob who I remember as being a very good driver. A couple of years ago a Rabobank masseur and I struggled to stay with her on a mountain road while taking a short-cut to the finish. The way she outmanoeuvred a couple of moto’s was poetry in a car! There was no trouble getting to the finish even with the back markers slowing us down. Lots of time to watch the victory salutes from Pablo Lastras…for Xavi Tondo, gracias. 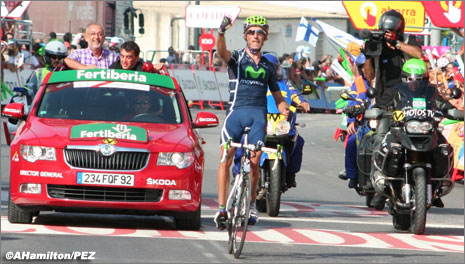 His ride into the finish was impressive holding off Chavanel in the break and the bunch behind. 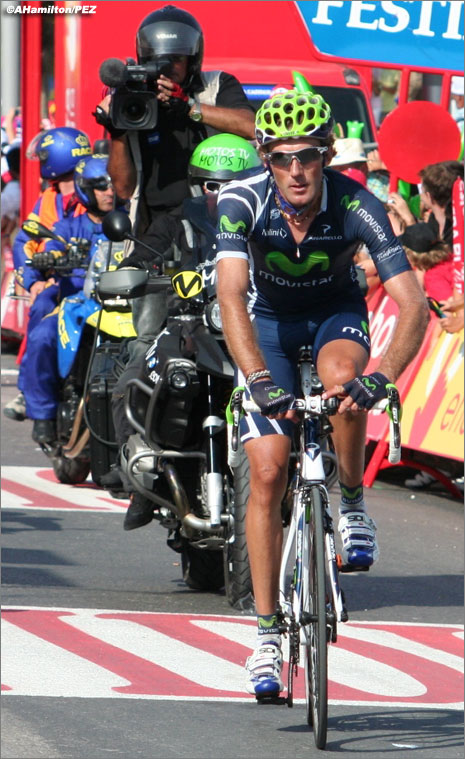 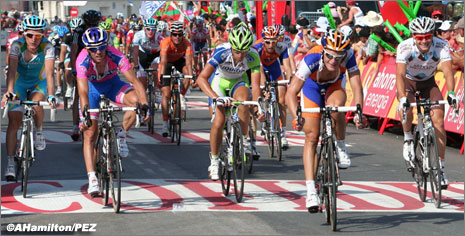 It just left time for a soaking of Cava again and the drive back home for another late dinner. La Vuelta…you just have to love it! 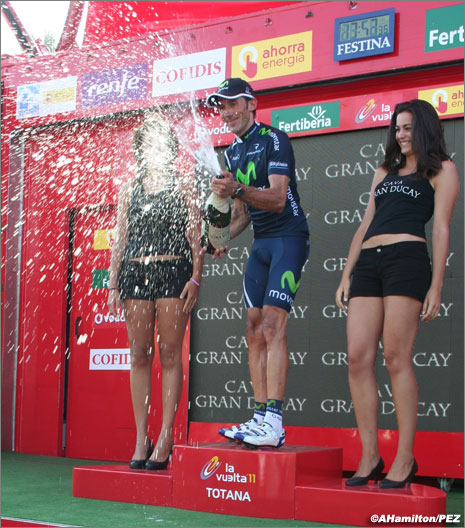