Race report: For the fourth year in a row, the Vuelta is a very happy hunting ground for David Moncoutie, with yet another perfectly executed stage win in his preferred domain. Minutes behind him, the top cats chopped and changed with the man in rojo doing the work for his team-mate who becomes the new Vuelta race leader …

Fifteen guys escape in the early part of the stage, the main heads say ‘Thank you very much’ and settle back for an armchair ride to the foot of the haul to the Estaciуn de Montaсa Manzaneda.

We’re in the stunning north-western region of Galicia today, a gourmet’s paradise, but David Moncoutie has got into the breakaway the sole idea of mashing his opponents once the road pitches upwards.

It’s a bitch of a day to be racing, constantly up-and-down as the race crunches north-north-east before doubling back on itself, and ultimately climbing the final clicks from the north-east.

Ag2r’s Matteo Montaguti is making sure the mountains classification isn’t simply handed to Moncoutie by trimming a few points from the Frenchman on the opening two climbs, before Moncoutie goes first over the Alto de Hermida (3rd category climb). 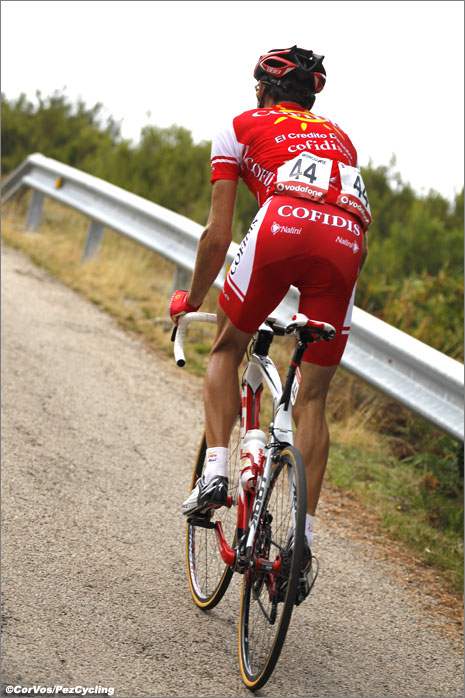 Today was all about David Moncoutie. The veteran Frenchman was victorious on the day, and assumed leadership in the mountains classification. Can he make it four in a row???

Adrian Palomares is doing the job for wildcard team Andalucia, once again in the day’s escape and once again snaffling some Euros as he tows Joan Horrach and Evgeni Petrov through the first intermediate sprint.

Palomares attacks first as the final 19km climb looms taking Saxobank’s Rene Jorgensen with him. Behind, the gap has only just come down under seven minutes as Sky tool along with Froome and Wiggins sitting pretty.

Palomares doesn’t last long though and blows. Moncoutie finds himself solo, but Movistar’s Benat Intxausti gets up to him, then briefly O’Grady (Leopard-Trek) and Matthias Frank (BMC). Every time the road steepens Moncoutie goes away; every time it flattens he gets pulled back. 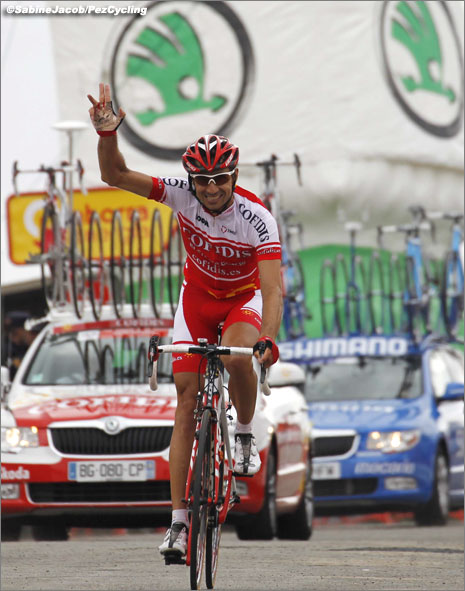 Thomas Lofkvist is busting a gut for Froome and Wiggins in the main field. Ten kilometers to go for Moncoutie and he leads a fragmented chase by 10 seconds; the peloton by five minutes. 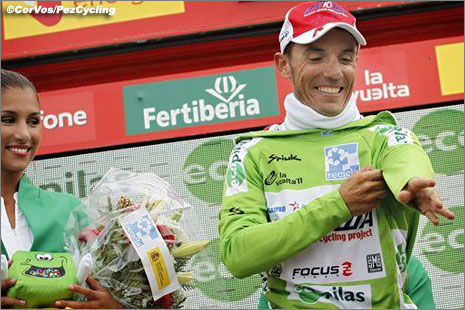 The Frenchman is on a perfect day and pulls out the lead to 45 seconds with eight clicks to go; Sky are sitting unruffled as Katusha try to shake things up with Karpets applying pressure.

Then Rodriguez goes for Katusha; Euskaltel’s Igor Anton cracks again. Chris Froome is now doing all the work for Wiggins who looks ominously strong. Moncoutie all the time is simply riding away with the stage and goes past two kilometres with well over a minute in hand.

Wiggins nullifies everything that Rabobank and Katusha can throw at him as Froome loses touch with one kilometer left. 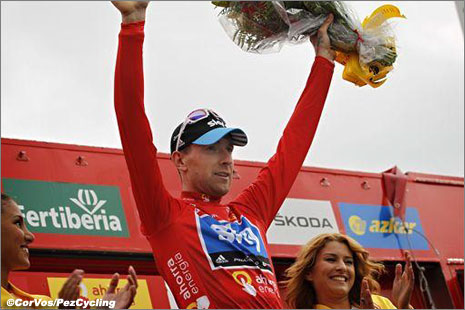 Wiggins is in Red!

Moncoutie is safe and wins another brilliantly taken Vuelta stage. Behind, Wiggins is the new race leader with Froome in second. But there are five riders within twenty seconds of each other … more excitement tomorrow? You bet! Keep it Pez!