A hilly Friday faced the lads before the double whammy of two summit finishes coming Saturday and Sunday, leaving the door open for the opportunists today. 5 categorized climbs came like Chicago voting on today’s stage – early and often, but a huge break rolled away and HTC’s Michael Albasini outkicked his breakaway companions to score the second win for his team’s final grand tour. 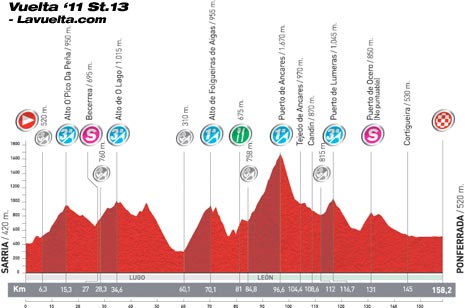 150km from Sarria to Ponferrada faced the riders today under yet again sunny skies and warm temps. And a special guest spectator was in the follow cars – Alberto Contador himself followed today’s stage.

The beginning of the day was marked by some odd happenings, as twice huge groups of over 30 men were forming the breakaways on the early climbs, one even including race leader Bradley Wiggins. Eventually the groups broke up and Wiggins ended up back in the main field, but the break that managed to solidify was huge. Ready for the list of riders? Take a sip of coffee, and a deep breath.

Of note are Moreno, Sorenson, and Roche, all of whom sat inside of 4 minutes to the race lead. 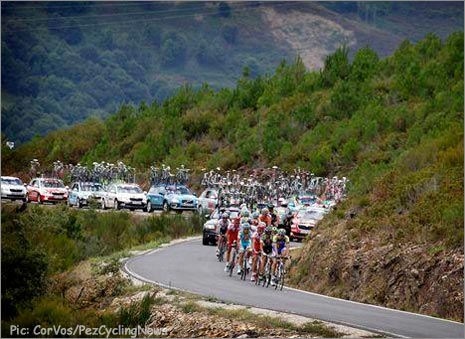 With a break of 30 riders, you can bet there’ll be a traffic jam of team cars not far behind.

Somewhat surprisingly, both Category 1 climbs in today’s course did little to break up the lead group, losing only 8 of the 28 that formed the group. Perhaps the downhill and/or flat 60km into the finish had the break thinking cohesion and thusly survival.

25km to go and Sky was really getting a lot of help from other teams, as most must have seen the danger of having Moreno up the road in the break. Radioshack was doing the spadework now, along with Liquigas, Astana, and Leopard-Trek. The field was strung out under this impetus and the break’s advantage began to sink like a stone.

The hilly day behind them eased off toward the finish and more flat terrain led to the run in to the finish, allowing the chasers to really go hard, but the break was also working the terrain to their advantage and holding a lead of 2:48 at about the 20km mark.

It was looking more and more like the break was to stick, so the attacks were sure to come out of this large lead group. And sure enough they did as riders kept throwing all kinds of punches.

Under the 5 km to go and the boxing match in the breakaway was underway. The main field had cut the lead down to 1:45 so the GC didn’t look to be too troubled by the time difference, but as the attacks came up front obviously their rhythm was disturbed.

Two out of the break, Albasini (HTC) and Pedrazo (Movistar), managed to sneak away. They were joined by Moncoutie and De Maar, who countered a bit, and just as Omega Pharma Lotto’s Jan Bakelandts rider came up, he lost it in a roundabout, sliding to the tarmac as he misjudged the depth of the turn.
At the 1km banner the break had reformed and the looking around began. Too big a group to attack and thusly the bunch sprint got started. Sorenson threw down first, but basically became the lead out for the group as Albasini jumped to second wheel. Roche was there. Madrazo dug at 400m but then Albasini came around him and had the engine to really drive it home over the line.

The main field came in behind not far behind, and again Wiggins and Froome of Sky held the 1st and 2nd spots in GC.

To the mountains over a grueling weekend!