Today Bradley Wiggins helped by his right-hand man; Chris Froome put himself ahead of all the other favourites in this year’s Vuelta a Espaсa with a strong ride that saw off Nibali and Rodriguez and ended the hopes of many others. Another full day of excitement on a monster stage of La Vuelta with a great ending!

The early news is that Michele Scarponi (Lampre-ISD) did not start this morning, on yesterday’s stage 13 to Ponferrada he lost 21 minutes to stage winner Michael Albasini (HTC), Scarponi was sitting in 37th place overall at 24 minutes and 10 seconds behind Bradley Wiggins (Sky). Adreas Klцden (RadioShack) will be joining Scarponi on the bus home as he did not sign on this morning.

The Stage Course
Today’s stage has a very hard last 80 kilometres with the 2nd Cat, Puerto de la Ventana, followed by the 1st Cat; Puerto de San Lorenzo and then finishing up the 1,715 metre high La Farrapona to the Lagos de Somiedo for a 20 kilometres climb after 175,8 kilometres of racing.

A break went away very early on the flat section after the start, no one wanted them to get too far up the road and there was a strong reaction from the bunch. At 26 kilometres they had 50 seconds, by 33 K’s the lead was up to 2:02. After 46 K’s it was over 3 minutes for the 17 risers in the break-away. They had over 4 minutes by 60 kilometres, and with 88 kilometres to go the gap was touching 7 minutes, but the mountains were in sight!

Puerto de Ventana
Over the first climb of the Puerto de Ventana (65K to the finish) the lead had dropped to 5:29 minutes and the Katusha team were the workers in the peloton. A bad crash for the break for Sep Vanmarcke (Garmin-Cervelo) and Karsten Kroon (BMC), they went over the side of the road into the bushes and needed to be pulled up the banking and their bikes had to be found in the trees, both seemed OK, Vanmarcke rode on, but Kroon abandoned.

By the base of the climb with 44 kilometres left to race, the lead was down to 3:50.

Katusha had five riders on the front of the peloton and sent Alberto Losada up the road; he was caught first by Marzio Bruseghin and his team mate; Beсat Intxausti (Movistar), who pressed on. Katusha stopped chasing leaving other teams to use their energy.

Rein Taaramae (Cofidis) attacked the leaders and was joined by David De La Fuente (Geox-TMC) before the top of the San Lorenzo. The lead group and the main peloton split under the pressure of the attackers. Fabian Cancellara (Leopard-Trek) dragged the peloton up after the leaders, pulling back some of the dropped from the leading group. 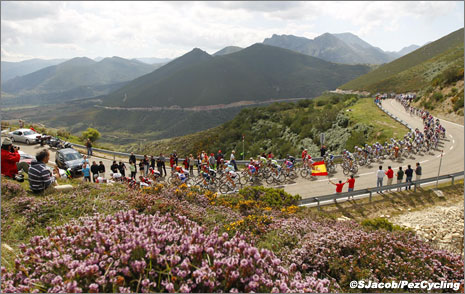 Dani Moreno (Katusha) attacked the Leopard led peloton, then Rodrigues started to cross to him, but gave up returning to the bunch, maybe it was too early for the man in the point’s jersey?

Further up the hill, Kuschynski (from the lead group) waited to help Moreno towards the top of the climb.

At the top of the San Lorenzo; Taaramae was first ahead of De La Fuente (2:21 lead), in the peloton Menchov put the pressure on, Rodriguez was there as was Nibali and it looked like the red jersey of Wiggins was in trouble and with no team mates.

On the long descent Liquigas put a rider on the front of the peloton as the important GC riders regrouped, Wiggins was amongst them and he had one team rider (Froome) with him. The race situation had Taaramae and De La Fuente at the front with 2:38 on the peloton, then Moreno (Katusha) with Bruseghin & Intxausti (Movistar) and Vorganov (Cofidis) 31 seconds in front of the bunch of GC men.

La Farrapona, Lagos de Somiedo
20 kilometres long with 1,100 metres of climbing with an average of 5.5% rise, the steepest part is 11% and the last 2 kilometres are at 10%. Taaramae/De La Fuelte had 1:21 on the Moreno group who had 46 seconds on the peloton. The Moreno group caught the remaining stragglers of the early group hoping for a ride up the mountain, many of them could not hold onto the pace set by Intxausti for Bruseghin.

The Wiggins group had grown to around 30 or so riders with Rodriguez, Nibali, Fulgsang and Kessiakoff all safely there. Bruseghin took over the work in the intermediate group and Rabobank’s Luis Leon Sanchez worked for the bunch and his man Mollema.

12 Kilometres to the Summit
Verdugo of Euskaltel rode on the front of the peloton with the Liquigas men on his wheel; at the front De La Fuente was towing Taaramae as Bruseghin set the pace for Moreno. At 10 to go Taaramae/De La Fuente had 57 seconds on the Bruseghin/Moreno group and 1:41 on the Wiggins bunch. The Moreno group were caught by the Wiggins group at the 6 kilometre banner and Amets Txurruka (Euskaltel) attacked.

The Last 5 Kilometres
On the start of the 10% section; De La Fuente and Taaramae had a gap of 58 seconds to Txurruka and 1:12 to the Wiggins group. Txurruka was of no danger to the GC as he was over 30 minutes back overall, but could be a man for the stage victory, but not today! Moreno jumped away (again) to be joined and then dropped by Cobo (Geox) who also passed Txurruka.

3 kilometres to go and De La Fuente/Taaramae had 45 seconds on Cobo and 1:04 over a Froome (Sky) led bunch. Rodriguez was in trouble and lost his hold and Nibali didn’t look so good either. 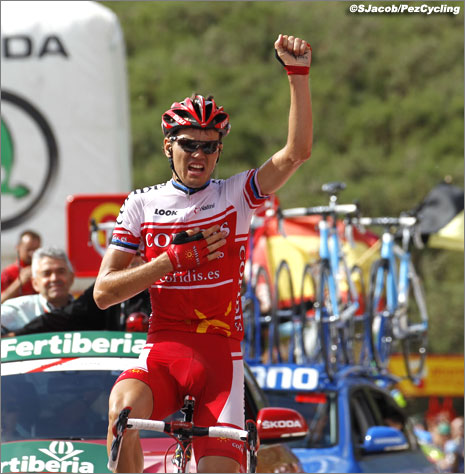 The Last 2K
Taaramae headed off on his own and De La Fuente waited for Cobo, Froome was doing the damage in the GC group, all the danger-men couldn’t hold the wheels as the GC group whittled down to around 10 riders. Taaramae had 25 seconds on Cobo who had left De La Fuente behind.

Taaramae won the stage on his won from Cobo and De La Fuente, Poels next and then Wiggins with Froome and Mollema. The important gaps were now becoming evident as Fuglsang, Nibali, Rodriguez and the others were lost amongst the crazy scenes of the finish line.

Sky did the business today with Froome taking his man, Wiggins nearer the win in Madrid, the Geox team tried so hard, at least they moved Cobo up to 4th overall.

Tomorrow should see more excitement on the Alto de L’Angliru…stay PEZ for the action.