Race report: When you look at the victory list on the Anglirъ, it’s pretty obvious that this isn’t a climb that just anyone can get away to win on: El Chaba Jimenez, Gibo Simoni, Roberto Heras, Alberto Contador. Who is going to join that illustrious group today? Can Bradley Wiggins retain his lead and come up with something pithy for the interviewers post-stage? Read on …!

Heading towards the mid-way point today, it’s Garmin-Cervelo’s impressive Andrew Talansky off the front with Skil-Shimano’s Simon Geschke and Dimitri Champion of Ag2r. Scratching the itch of six minutes, the lead is not going to keep them safe until the Anglirъ, but it’s good to see young talent showing itself.

Fifty to go and they still hold five minutes plus, as Katusha look over their shoulders at Sky to help with the chase work. Talansky takes the intermediate sprint points, but the lead is being slashed ahead of the Alto de Cordal. 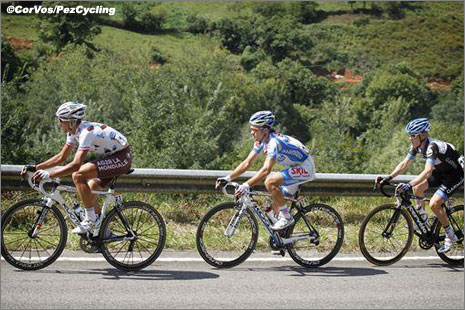 Geschke reckons he’s going to do better on his own and takes flight, but the gradient catches up with him as does Movistar’s Marzio Bruseghin. The veteran Italian has high-quality company: Garmin-Cervelo’s Dan Martin; Carlos Sastre of Geox-TMC; and mountain king David Moncoutie of Cofidis, who nips clear to take the ten points … doesn’t seem much of a reward for a tough effort like that!

The field is trailing by about 20 seconds, and it’s Peter Sagan pulling for Liquigas. Is there anything he can’t do? Wiggins is showing possible signs of struggling, as the lead group thins out.

Bruseghin leads as he hits the foot of the Anglirъ, but he soon cracks and Sastre goes.

Eight kilometers to go, and Sastre is riding like he did in the vintage 2008 Tour de France winning days, or when he snatched that brutal brace of Giro stage wins in 2009. He flies under the banner, and onwards, upwards.

Wiggins has Froome right with him, their rhythms in perfect synchronicity. Joaquin Rodriguez is in attendance.

Igor Anton springs to life, and zips up to and past Sastre. Inside seven to go and Juanjo Cobo goes and opens a little gap; no panic from Sky … yet. Wout Poels is hanging on, but Anton’s fire has gone out. He’s now going backwards.

Five clicks to survive, and Cobo has about 15 seconds. He’ll need more than that to take the jersey.

Four kilometers to go, Cobo is battering skywards, looking good. Froome, Wiggins, Rodriguez, Menchov, Poels all in a row, chasing. The climb now looks Scottish! Cloudy, damp, cold, lots of bracken and ferns by the roadside, battered road surface. 30 seconds now for Cobo. He gets a monumental ovation as he rounds a left-hander and the road pitches up to 13%. A nutcase in a gorilla suit is bouncing around on the edge of the road.

Does it freak Rodriguez out? Don’t know, but he’s now losing touch with the Wiggins group.

The Asuturian flags fly, azure blue with a yellow cross; the banners for Jose Maria Jimenez, the late ‘El Chaba’ – first Vuelta winner on this beast – are brandished with real passion.

Three to go for Cobo now, he’s bouncing in the saddle. It’s the Cuena les Cabres section now and the gradient is horrific – 18%. It’s 40 seconds back to Wiggins. The jersey could be switching shoulders.

21%, 22% 23%! The gradient is tilting painfully now. There’s enough space – just – for Cobo to pass between the fans. He’s starting to labour a bit now. Froome is towing Wiggins, who practically has his chest on the handlebars with the pain and the effort.

Froome and Wiggins are all over their bikes, weaving desperately. Menchov is sitting right behind Wout Poels who takes it up.

The camera moto following the Wiggins group topples over! Fans leaping around in a frenzy of excitement as Cobo flies. Chaos. Cobo rounds a right-hander and takes the widest, shallowest line he can find.

Two kilometers left now. Still Cobo is going fast enough that the fans can’t keep up with him. 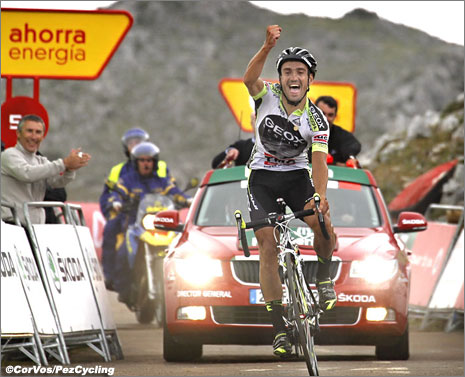 Les Pedrusines is the next section of the climb, and peeping out of the sky directly above Cobo is the red kite to mark the last kilometer. Up he zigzags, looking for every second he can find.

1000 metres to go now. It looks barren up here but there are still fans screaming for Cobo. The road’s flattening out now and Cobo has poured every ounce of remaining effort into the pedals. 1’ 10” is the gap now, and the advertising banners are flapping in the breeze.

Cobo flies over the line for the win. Where are Wiggins, Froome, Nibali?

Riders sprint into view and … Wiggins isn’t there! Poels second, Menchov third, then Froome. Wiggins is grinding his way to the line and it’s hurting. He loses 1’ 20” to Cobo, with the 20 seconds of bonus giving the Spaniard a 1’40” gap to Wiggins. 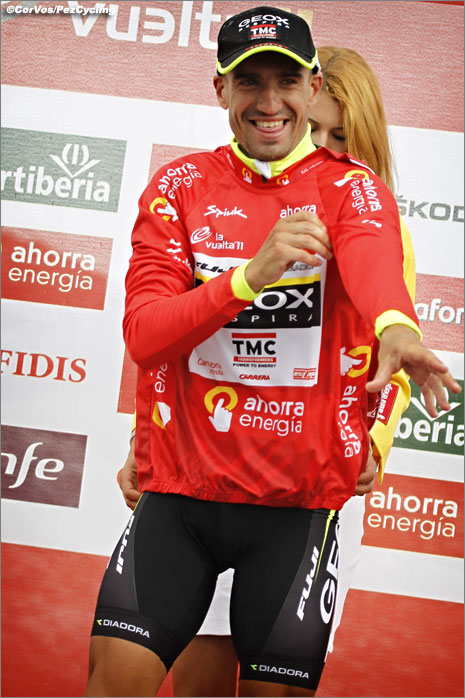 Who would have picked Cobo to be in red heading into the second rest day?

Nibali has lost two-and-a-half-minutes, and Cobo is definitely the new red jersey and the man to beat with a hard week coming up. It’s been another epic on the amazing Anglirъ.

This incredible climb has a new champion, and he’s a deserving one. Stay tuned to Pez for more information in tomorrow’s Eurotrash!