Saxo Bank/Sungard’s JJ Haedo read the directions correctly and won perhaps the most bizarre sprint finish in the history of the Vuelta on the last dance for the sprinters, you’re not going to believe this. Read on!

Today was the last hope for the sprinters, and a just reward if they had survived all the climbing of recent days. The 180km jaunt from Villa Romana La Olmeda to Haro was flat, with no rated climbs. And of course, the usual small break gave it a go and stayed away for the majority of the day. Antonio Cabello Baena and Jesus Rosendo Prado of Andalucia, and Julien Fouchard of Cofidis went away , and built up over 8 minutes worth of a lead, but the inevitable reaction from the peloton began to whittle away the lead. Surely this was the last chance for the sprinters, so all the teams were pitching in with the work, while Geox, with Cobo in the red jersey, got a mostly free ride.

An earlier crash saw Lampre’s Spezialetti hit the deck, showing all the trademark signs of having broken his collarbone.

In the crosswind sections, teams tried drilling it to force guys into the gutter and to snap the elastic, but it was all for naught. 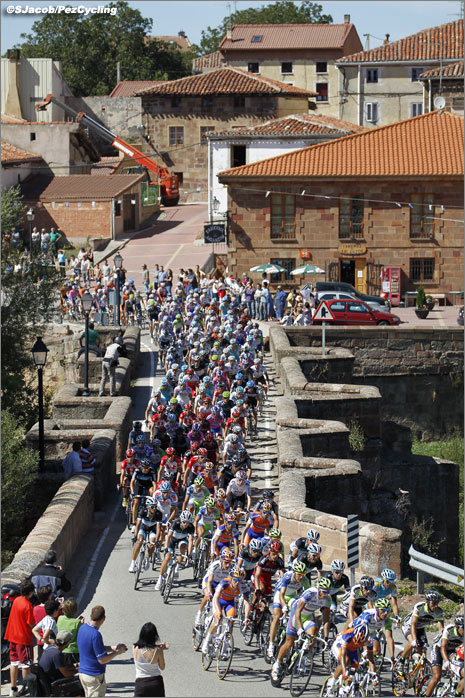 Andulacia’s Baena made a dig that Fouchard covered, Rosendo then countered his teammates moved and broke free of his two companions, with the Cofidis rider Fouchard berating Prado. I’m sure he was wondering just what the hell the attack was to prove. Whatever the argument, it worked, as Rosendo was alone now.

A crash at 18 km to go took out about 10 riders or so, and everyone was quick to get up for the most part, but it looked like Katusha’s “Purito” Rodriguez looked to have taken a nasty knock as he indeed remounted, but was barely moving. The medical car pulled up and started examining what looked like an injured left wrist.

Ahead, Rosendo continued plying his trade, arms draped over the bars in pseudo-TT position. But his time was limited as he was scooped up as were his previous break mates before him.

Now inside of 10km, the sprinters teams were still drilling the pace, with Geox doing their duty as well and helping out. Behind, 2 Katusha riders were dispatched to their green jersey wearing Rodriguez, who was clearly hurting and just trying to get the stage completed.

Leopard –Trek was on the front and absolutely killing it at 48km an hour, with Cancellara sitting 2nd wheel. He probably would be happy to put the work in now as he’ll retire from the Vuelta tomorrow to prepart for the World TT championship race. Sagan lurked nearby as they swept a long right hand turn. Haedo, Sagan, Bennati, all were set up nicely under the 1km banner. Fabian pulled off, leaving 3 Leopard-Trek riders on the front working for Bennatti.

Then the strangest thing I’ve ever seen happened. As they approached the final roundabout where the group should have gone left, indecision at the front saw the leadouts and sprinters go different directions, with Bennati’s perfectly placed and executed leadout train all going the wrong way, along with Peter Sagan. Most of the peloton behind figured out the correct direction, but inside of 500 meters, the slight slowing doomed anyone behind. The promoters certainly should have had that barricaded a little more evidently. 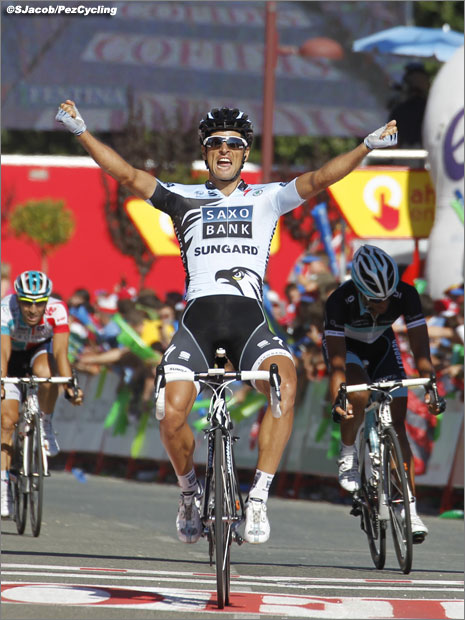 JJ Haedo of Saxo Bank-Sungard apparently had read the race bible or listened to his directors as he knew which way to go, and was left basically alone as the directional confusion caused a split for everyone behind. Laughing, he crossed the line with his arms up.

Red Jersey wearing Cobo managed to come in 10th, showing he can climb and sprint it seems.

Purito limped in 11 minutes down with three teammates, no doubt headed straight to the doctors.

Despite the confusion at the end, the result didn’t affect the GC at all. But tomorrow we head back to the hills! Stay tuned to Pez for all the best coverage of the Vuelta!