Stage 17 came down to the last steep 3 kilometres up to the summit of the Peсa Cabarga for a battle Royal between the top two riders in this Vuelta a Espaсa. It was head to head & toe to toe action with one attacking the other as the mountain climbed higher towards the finish. Froome needed to attack; Cobo had to respond…it was close fought action all the way to the line.

Unlike yesterday’s stage, today is rather hilly over its 211 kilometres. The longest stage on this year’s Vuelta goes from the Bodegas Faustino V, if members of the press can be prized away from the top wine, and crosses the Portillo de Bustos (3rd Cat) and then the Portilla de Lunada (2nd Cat) before finishing up the steep summit of the Peсa Cabarga which is 6 kilometres in length with ramps of 16% and 19% in places. The leader on points; Joaquim Rodriguez (Katusha) did start this morning as there were no broken bones in yesterday’s crash, but he is in pain.

The start was crazy fast with many attacks, this saw the abandonment of Movistar’s Ignatas Konovalovas with gastric problems, he was soon joined by his team mate, David Lуpez and the team were reporting that Angel Madrazo was with the medical car and Imano Erviti and Sergio Pardilla were in trouble, not a good day for the Movistar team, Rein Taaramae (Cofidis) also climbed off.

With 120 kilometres to go a break of around 20 had a lead of 1:32, the gap went up and down until they were eventually caught after a lot of work from Katusha, and then another group took their place up the road. The big group had crossed the summit of the first climb, Portillo de Bustos and Christophe Le Mevel (Garmin-Cervelo) took the KOM points.

With 70 kilometres to the Peсa Cabarga the five leaders had 1 minute on a bunch that was all together.

The breakaway riders were: Greg van Avermaet (BMC), Oliver Kaisen (Omega Pharma-Lotto), Guillaume Bonnafond (Ag2r-La Mondiale), Evgeni Petrov (Astana) and Johannes Frohlinger (Skil-Shimano). Sylvain Chavanel (Quick-Step) had been part of both breakaways, but ended up back in the peloton.

On the 2nd Cat climb of the Portillo de Lunada; Oliver Kaisen looked to be the strongest as he led the break, behind the work was being done by Vacansoleil-DMC. Marzio Bruseghin (Movistar) and Mathias Frank (BMC) rode off from the peloton, they were soon joined by the KOM mountains leader; David Moncoutie (Cofidis) and made their way up to the leaders to catch them before the top. Geox-TMC took over the chase work with Denis Menchov setting the pace for the race leader; Juan Josй Cobo.

At the top of the Portillo de Lunada; Guillaume Bonnafond was first with David Moncoutie second adding to his KOM points, the bunch were at 39 seconds. At the bottom of the long, fast descent; bunch and break were together at San Roque de Riomiera with 32 kilometres to the finishing climb. Pablo Lastras (Movistar) and Andrey Kashechkin (Astana) tried their best to get away, but they were given no chance by Geox.

The Last 20K
Through the village of Rubalcaba the pace was still high with Geox and Katusha flogging the peloton, “Purito” Rodriguez must have recovered from yesterday’s crash and be looking for a repeat of his win here in last year’s Vuelta.

Greg Van Avermaet (BMC) attacks, but not for long as Garmin-Cervelo start to help Geox and Katusha to keep the speed impossibly high coming up to the sprint.

10 K’s To Go
Still all together into Solares for the intermediate sprint and Luca Paolini and Eduard Vorganov for Katusha were 1st and 2nd with David De La Fuentes (Geox-TCM) 3rd, making sure that no one else was going to take any time bonus. 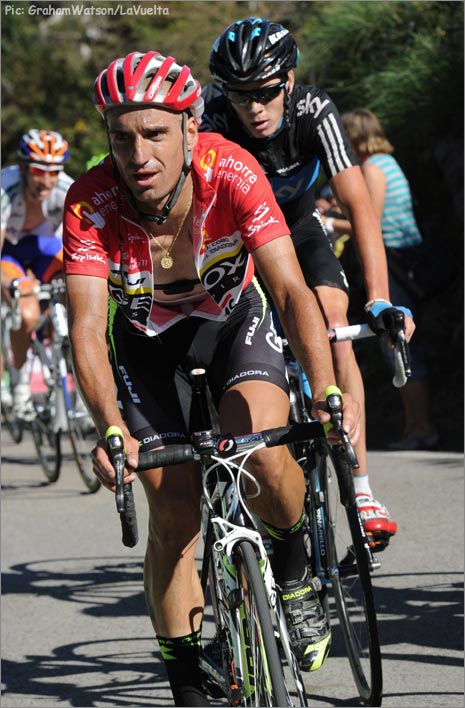 Cobo and Froome locked in battle.

The Peсa Cabarga
At the bottom of the climb a Rabobank rider put a little pressure on, but it was too early. Amets Txurruka (Euskaltel) rode on the front, until Dan Martin (Garmin) passed him and the two drifted off the front. Tzurruka couldn’t hold the Irishman’s wheel and soon had a good lead on the Menchov led bunch.

With 4 kilometres to go Martin had 9 seconds on Bruseghin, with the peloton comfortably holding them at a distance. Bruseghin caught Martin and then tried to attack him, as the climb steepened with 3 to go they had 14 seconds on the bunch. Cobo, Froome, Menchov and Rodriguez were to be seen at the front of the chase as Chris Anker Sorensen (Saxo Bank) closed to Martin and Bruseghin. Next to come up to them was Van Den Broeck (Omega Pharma-Lotto), he blew straight past, but the bunch were on them.

The split had been made behind, though Cobo brought Froome and Nieve across as Wiggins and Rodriguez couldn’t hold the blistering pace. 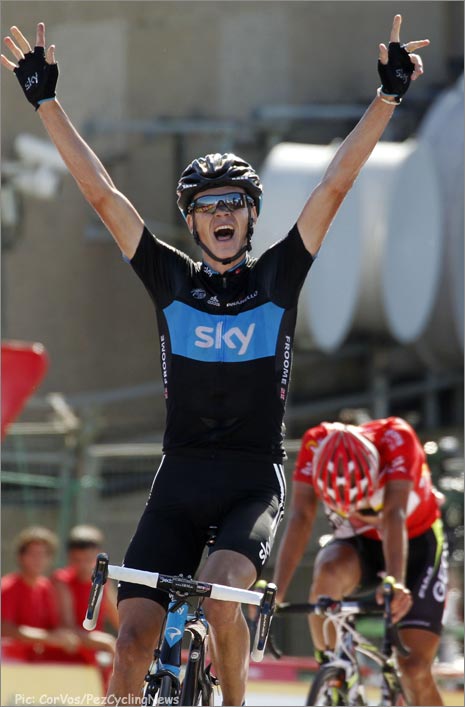 The Last K
Cobo attacks, Froome goes with him and then the Kenyan born Froome puts in an enormous jump and Cobo couldn’t hold him. Cobo looked to have cracked, but buried himself to pull himself back to Froome, Cobo passes Froome and then is passed again by Froome for the stage win and the very important bonus seconds. Mollema struggles in third place and Dan Martin in fourth.

The gauntlet was thrown down by Cobo and Froome took it up and showed he was up to the job. There are still three hard days to come, an up-hill battle, but anything seems possible on this Vuelta a Espaсa! Keep it PEZ.