After all the efforts of yesterday the peloton took the day off today. A group of 17 went away early and even though they didn’t see eye to eye on occasions they fought out the last few kilometres for Gavazzi to give his Lampre-ISD team a much needed stage win. Not as an exciting day as yesterday, but in three week you have to expect it some time!

At the start today the General Director of La Vuelta a Espaсa; Javier Guillйn announced that next year’s race will start in Pamplona on the 18th of August with a prologue and the start of stage 2 to the town of Viana.

Reading this morning Spanish Sports paper AS; Sky’s Chris Froome has earned himself many fans in Spain due to his attacking style and even in the Cantabrian home land of race leader Juan Josй Cobo there are many who now admire the Kenyan born rider. The headline read “Bisonte vs Keniano” (The Bison vs. The Kenyan”) and the newspaper pointed out: “It is inevitable to speculate what would have happened if the Britain (Froome) had not been sacrificed in favour of Wiggins, especially in Manzaneda, when he was leader and worked as a galley slave to give the jersey to his boss. That day he lost 35 seconds.” Hopefully this will make up for some of the remarks that his team leader; Wiggins has made during the race.

Today’s stage:
Solares to Noja, 174.6 kilometres of up’s and down’s with three 3rd Cat, one 2nd Cat and a 1st Cat. More importantly to the overall is that there are two intermediate sprints with bonus seconds on offer.

A break of 17 riders very early in the stage and by the 16th kilometre they had 3 minutes 13 seconds on the peloton, by the 40 kilometre mark they had nearly 10 minutes at the start of the first climb; the Puerto de Braguia (3rd Cat), which was won by Matteo Montaguti (Ag2r-La Mondiale), this was followed immediately by the 2nd Cat Alto del Caracol.

Sijmens and Montaguti broke away from the leaders just before the top of the Alto del Caracol for Sijmens to take the KOM points to protect the mountains jersey lead of David Moncoutie. The peloton were 9:55 behind and being policed by the Geox-TMC team, this suited the overall leader; Cobo as Froome would not be able to pick up any bonus time. The Movistar team lost Angel Madrazo due to the virus that has left only Lastras, Bruseghin, Intxausti and Erviti in the team.

Through the feed zone the gap was much the same at 10 minutes and at this point most people were thinking of who would win the stage from the break away.

The 1st Cat climb of the Puerto de Alisas climbs around 600 metres in 9.4 kilometres with an average slope of 6.2%, but does kick up to 10.9% for the last 1.4 kilometres, but it is over 50 kilometres to the finish with two more 3rd Cat’s, so probably a little too far out for one or two riders.

Haussler was first to attack, he was chased and passed by Montaguti, Sijmens Kiserlovski and joined by De Greef. Rodriguez didn’t want to be left out and started to pull them back which blew everyone off his wheel except Paulinho and Vandewalle, some of the others managed to get to them just before the top to see Sijmens take the points from Montaguti, around 11 riders crossed the top at the front for the descent, Haussler, L.L. Sanchez, Timmer, Juprfe, Kohler and Malacarne had been dropped.

Nico Roche (Ag2r-La Mondiale) jumped away from the peloton and was eventually joined by Wouter Poels (Vacansoleil-DCM), at the top they had gained about 1 minute, but the group was a long way up the road. Euskaltel didn’t want Poels away due to his top ten place and chased the pair down.

Rodriguez took the intermediate sprint in Riba with 40 K’s to go to the finish in Noja, he will be looking to recover the green points jersey from Bauka Mollema (Rabobank).

Sijmens took the points again on the Puerto de la Cruz Usaсo (3rd Cat), but nearly ran out of road on the descent, he was OK but it was a close call. Euskaltel took over the leading of the bunch, no real chase, but with more speed than Geox wanted to put to the task.

Up the last climb of the day, the Puerto de Fuente las Varas (3rd Cat), RadioShack’s Sergio Paulinho attacked the others and by the top, with 26.7 kilometres to go, he had a lead of 43 seconds over the other 10 and over 11 minutes to the peloton.

20 Kilometres to Noja
The chasers behind Paulinho were not organised at first, but they soon started to make a better job of it, except for the non-working Montaguti. The Portuguese rider was committed to the flat ride to the finish. Through the village of Beranga at 15 out, Paulinho was 39 seconds ahead and there were six of the ten chaser working.

Joaquim Rodriguez is the man with the most to gain from a stage win for his points jersey aspirations.

Last 10 K
Paulinho had 28 seconds and he was losing around 3 seconds per kilometre, but the chasers were too busy fighting each other over who should work, Montaguti did not want to see the front and was annoying everyone. 6 kilometres and he only had 17 seconds advantage and it was not looking good for the man who is in need of a contract for next year.

5 Kilometres to go
6 seconds was not going to be enough, but Paulinho was still out at 3 kilometres due to the messing about of the group. Kristof Vandewalle (Quick-Step) attacked past Paulinho, he was joined by Francesco Gavazzi (Lampre-ISD-ISD) who sat on. 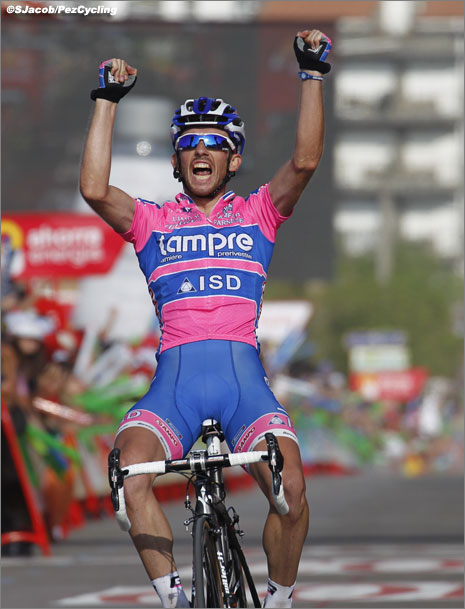 Vandewalle put as much pressure on as he could to rid himself of Gavazzi, but Gavazzi jumped the big Belgian with 500 metres to go and took it all the way to the line for Lampre’s first win in this Vuelta. Ganiez of Skil-Shimano brought in the other 13 seconds after. We had a wait of nearly 8 minutes for the bunch sprint which was won by Simon Geschke (Skil-Shimano)

The overall stayed the same with Cobo in the lead from Froome, but “Purito” Rodriguez (Katusha) took the green points jersey back.