Back to the heat and hills on the 19th day of racing with temps at 100F and 4 categorized climbs. Two Cat 3’s and two ascents of the Cat 2 Vivero on the finishing circuits with the last climb just 15km from the finish were sure to provide some fireworks, and Igor Anton lit the fuse for the rabid fans…Read on!

The Vuelta was headed back to the Basque country today, for the first time since the late 70’s, and to say the orange clad cycling fanatical Basque fans were excited is an understatement. The stage wound out from Noja along the coast and rolled into Bilbao, where the riders would complete two circuits and two ascents of the Cat 2 Vivero.

A break of 4 reached Bilboa together having built a lead of 6 minutes at one point.

First time through the finishing loop, and the Basque fans were giddy with excitement seeing the 2 Euskatel riders in the break. The quartet was working as hard as possible. Igor Anton and Gorka Verdugo from Euskatel, and Marzio Bruseghin of Movistar were a trio now, as Daychenko of Astana didn’t have the chops deeper into the race and he left the break with about 25km to go.

Inside of 20km, and Verdugo popped, leaving just two in the break. Almost simultaneously back in the field, Purito Rodriguez of Katusha attacked out of the field.

Igor Anton busied himself by shaking Bruseghin off his wheel to go solo, driven on by the fans.

Behind, Rodriguez got company in the form of Perget (AG2R), Rohregger(Leopard-Trek) and Sorenson (Saxo Bank-Sungard), who promptly dropped the Katusha rider who had started the move.

Anton drove on, tackling almost the entirety of the Vivero out of the saddle and receiving huge support from the Basque fans, clad in orange and 3 deep up the slopes of the climb. He had 2:19 as he neared the summit. He was clearly motivated, as he lives at the foot of the Vivero. The hometown kid was being willed to go hard up the climb by the rabid fans.

At the front of the main field, it was role reversal as Wiggins was on the front, driving the pace with Froome on his wheel. The Sky riders were closely monitored by race leader Cobo , who sat 3rd wheel in observance. The work took its toll on Nibali, who was dangling at the back under pressure. Nibali wasn’t the only one as Wiggins’ tempo was shedding more and more riders out the back. 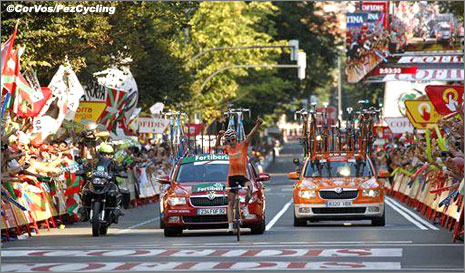 And it had to happen, Froome threw down and attacked hard, and Cobo saw it and clamped on to the rear wheel of the Sky rider. Froome took an assessment and saw Cobo, and sat up a little bit, recharging. If he wanted to wrest the red jersey he must go again. And go again he did with another trademark high cadence attack, and Cobo was again the measure of it. Froome ran out of hill, and began the descent with Cobo attached to him.

Anton still ploughed along alone, blasting along at 68 km/hr racing with everything, for everything, with 6km. The Euskatel car pulled up alongside him, and all the occupants shook their fists and screamed encouragement at Anton. He had 30 seconds on Bruseghin who was in no man’s land, and still a few minutes over the field. After such a tough start to the Vuelta, the Basque rider had to feel great vindication. It was his 4th stage win at the Vuelta, but this one had to be the sweetest.

Froome, having fired all his bullets, and the observant Cobo were swept up by the group, where the red jersey just monitored the Sky rider’s every move. 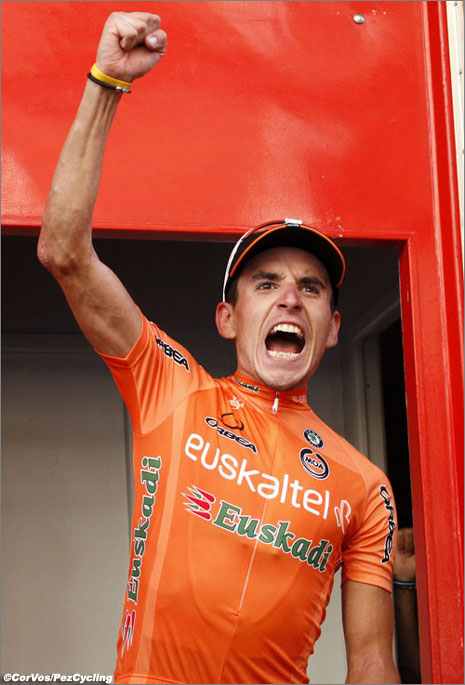 In the finishing straight, Igor Anton had time in hand to sit up, zip up, and celebrate his well earned victory. Teeth and fists clenched and held over his head, he crossed the line, the only one in the picture.

Bruseghin held on for 2nd place 40 seconds later, still in no man’s land and alone. What was left of the main group came in together with Froome, Wiggins, and Cobo all on same time.