Race report: It’s not far off 40° Celsius and the heat seemed to play tricks with the sprinters’ teams today as none of them really got it absolutely bang on. It’s a redemptive win for Team Sky after yesterday’s ‘error’, and we have a heroic effort in the day’s break from an Aussie battler. Here’s the story …

Rosendo has a go for the day’s King of the Mountains points on the Alto de Relleu, but it’s Martens who gets the jump and the jersey for tomorrow.

Fabian Cancellara has the red number as yesterday’s most aggressive rider on his jersey, and a swimming pool’s worth of water in bidons stuffed under it.

The peloton has been taking it real easy in the first hour, but with the break out to six minutes, they start to ramp it up towards 50kms/h, with Bert Grabsch as usual on the front for HTC-HighRoad, Nerz there for Liquigas, Garmin-Cervelo sending a man up and a sole representative from Liquigas, just for appearance’s sake. 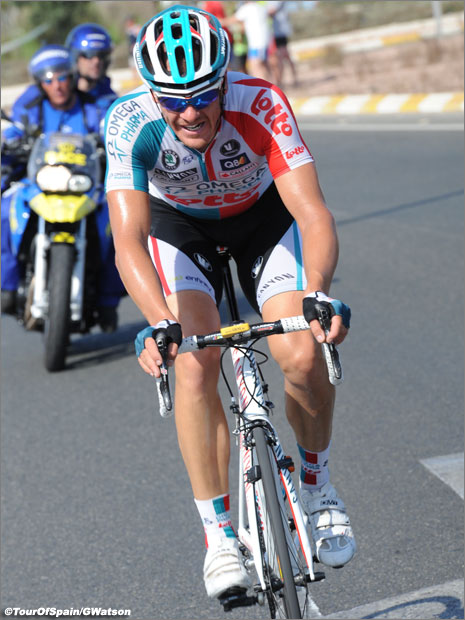 There’s quite a crosswind sweeping across the coastal roads on the run south from La Nucнa to Playas de Orihuela and the break are getting a bit of a hiding as their advantage melts down under four minutes and still fifty baking hot kilometres to go.

Rosendo didn’t get the mountains points but he dashes away for the intermediate sprint with 45kms to go.

32 clicks from home, Adam Hansen is in deep conversation with his team car, who obviously reckon the break is doomed, doomed! So Hansen attacks full-on. Rosendo leads the chase, can’t get up to him, flicks the elbow for help … no-one comes through.

Hansen has a gap, but it’s going to be a hell of a ride to hold off the peloton at this range. Houanard is the first of the escapees to give up the ghost as Martens and Resondo take up residence in no-man’s land. They, too, are picked up just a snip inside 25 kilometres to race.

Up ahead, Hansen is now getting pushed along by a howling tailwind and hits 53 kms/h. Sky’s Bradley Wiggins is up front now, sheltered behind the massive frame of Ian Stannard, with Dario Cioni taking his back wheel. No messing about today.

Inside 20 kms to go and HTC-HighRoad are on the front, but are they too early – which one of their many sprinters fancies it today? Mark Cavendish, Leigh Howard, John Degenkolb? Not Matt Goss today, though, who was the first abandon of this year’s Vuelta.

The riders are metaphorically balls-out now, speeding to the line at 73 kms/h! Bert Grabsch is very slowly turning a ridiculous gear and producing a blistering speed as we duck inside 15 clicks from home. Hansen’s brave effort is toasted.

Lampre-ISD are bringing Alessandro Petacchi to the front; Leopard-Trek are moving Daniele Bennati forward – the sprinters are getting twitchy. Marcel Kittel is Skil-Shimano’s go-to guy, Liqiuigas are working for Peter Sagan while Rabobank are looking for Oscar Freire. 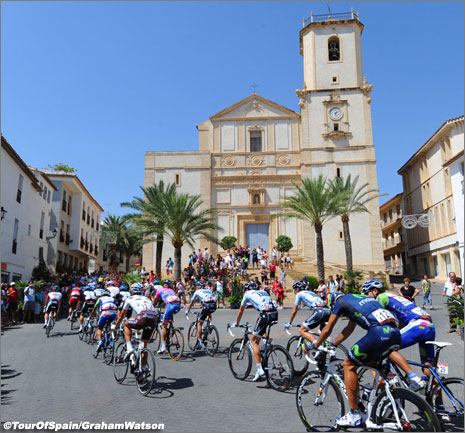 The overhead camera shots are incredible. Grabsch takes the front as the field is bunched across the road; not one kilometre later it’s one long, looooong line. Awesome. The peloton is starting to fracture. Now Hansen is back on the front working for his Omega Pharma-Lotto squad!

Three clicks to race. Riders are dropping off the back now, Cavendish grimacing a little as he holds Tony Martin’s wheel. O’ Grady on the front for Leopard-Trek before Vigano takes over on a 180° bend and suddenly opens a gap!

The run-in is tough though as we hit about a 5% climb in the final 500 metres. Boonen suddenly hits the front but it’s too early and sits up which catches out Sagan and Bennati

Reynes leads out for Omega Pharma with Sky’s Chris Sutton suddenly appearing out of the heat on is wheel! The Aussie tears past the Spaniard to take a massive win. 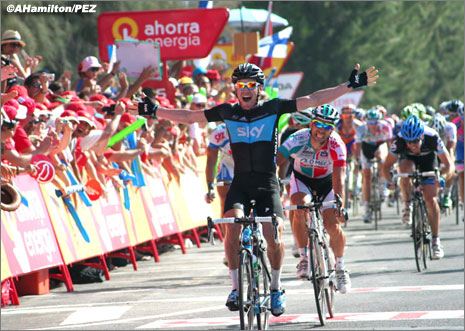 Cracking finish to the stage, with a big nod to the heroic Adam Hansen as Fuglsang hands the leader’s red tunic to his team-mate Daniele Bennati.

Stay tuned to Pez for all the best Vuelta coverage!