There was no change to the overall after the finish of today Vuelta a Espaсa stage between Bilbao and Vitoria. There was still lots of action, a miss judgement from Froome saw him go for the wrong intermediate sprint, a big break and solo attempts from Barredo and Sastre, but in the end it came down to a sprint finish. Madrid here we come!

Today is (probably) the last chance for Chris Froome to win La Vuelta a Espaсa, he needs 13 seconds and more to take the red jersey from Juan Josй Cobo. The course does have opportunities for time gains with the 2nd Cat Karabieta at 47 kilometres, the 1st Cat Elosua at 64 kilometres, the non Cat Descarga at 93 kilometres, the 3rd Cat Kanpazar at 112 kilometres and then the very tough 1st Cat Puerto de Urkiola with 46 kilometres of flat roads to the finish. The Urkiola could be decisive, but it’s a long way from there to the finish in Vitoria, it’s possible that the cross wind could be more important. There are two intermediate sprints and the finish line bonus seconds, but this depends on who is there to contest them!

A big early break of 26 riders had 52 seconds advantage after 32 kilometres, at the base of the first climb; the Alto de Karabieta they had 1:38, by the Alto de Elosua it was 3 minutes. They reached their maximum of just over 4 minutes with 100 kilometres to Vitoria still to ride. After a lot of work from RadioShack the lead was back to 2 minutes as they neared the summit of the Alto de Kanpazar, by the top it was only 1:14, 73K to go.

50K Out
RadioShack were still on the front of the main bunch and with 53 kilometres left to race, the lead was only 38 seconds as they started the biggest climb of the day the 1st Cat Puerto de Urkiola. The first to attack was Barredo (Rabobank); he was followed by Roche, Txurruka, Le Mevel, Caruso, Kiserlovski and Kruijswijk on the 11% rise. Jan Bakelandts managed to join them after a little chase.

Geox took charge of the peloton as yesterdays winner, Igor Anton (Euskaltel) was yo-yoing off the back. Carlos Barredo headed off on his own from the leaders through a mass of Basque fans.

Barredo was first over the top of the Urkiola with a lead of 1:37 from the Geox led group and 1 minute from the remainder of the escapees, there was no attack by Froome on the last climb of this Vuelta! David Moncoutie of Cofidis can now relax as his KOM jersey is safe for another year (again).

Barredo pressed on, on his own, the chase group of 7 were 43 seconds behind and the red jersey group at 1:20 with 37 kilometres. The 7 were Bakelandts, Txurruka, Kruijswijk, Caruso, Roche, Kiserlovski and Le Mevel. Leopard-Trek put their strong-man Stuart O’Grady on the front of the peloton for sprinter Daniele Bennati.

At 30 kilometres out, it looked like it would all be together as the chasers were caught, Barredo rode on managing to hold a gap of 30 to 40 seconds.

10 kilometres later through Ullibarri-Gamboa and Carlos Barredo had lengthened his lead to 46 seconds, at the same point for the peloton; Chris Froome attacked, but Cobo was on him like a flash, strange tactics from the Sky rider as the sprint was 1 kilometre farther on.

This launched Sastre up the road after Barredo and when the sprint came, Wiggins took it from the peloton for 3rd which is only 2 seconds.

Sastre caught Barredo at 15 kilometres out and they had a lead of 27 seconds as Leopard-Trek with Kazakh Nation Champion; Andrey Mizurov of Astana was doing chasing.

10 kilometres and the gap was 31 seconds from Sastre and Barredo to the peloton. The lead came down to 25 seconds and Sastre rode Barredo off his wheel to head for home on his own. At 5 kilometres Sastre only had 10 seconds as more teams started to help the chase/lead out on the front, this spelt the end for the ’06 Tour winner; Sastre. 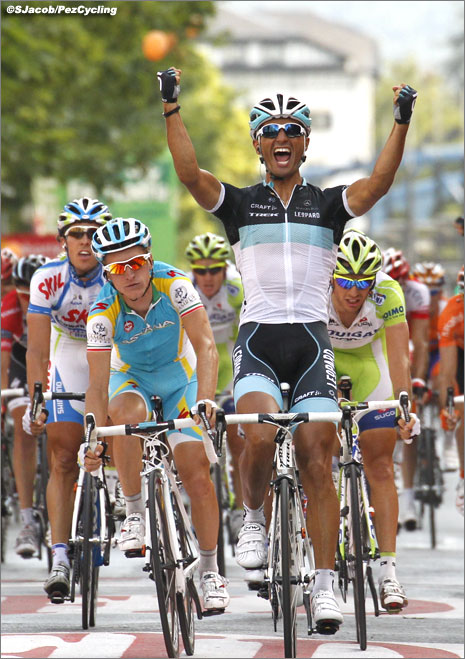 The peloton could see Sastre in the distance as they came into the last 3 kilometres. Carlos Sastre was back in the bunch 2 K’s out.

Through a sharp bend and Quick-Step, Astana and Leopard-Trek put the speed up for their sprinters. Through the last kilometre and Daniele Bennati (Leopard-trek) came off the lead out wheel with Gasparotto (Astana) right behind him, Benatti was too strong and fast for the other Italian and had the stage win fairly easily.

So…All the same as this morning; Cobo leads form Froome and it’s only the 95.6 kilometres to Madrid to confirm this year’s La Vuelta a Espaсa winner.