Race report: He might not have been a favorite, even in his own team’s line-up but Juan Jose Cobo has finally fulfilled his considerable promise and nailed the Vuelta a Espana. The last stage was a bit of an anti-climax in the overall – Sky didn’t attack. But there was plenty of drama as a few scores were settled right on the finish line!

Geox-TMC lead the race into Madrid in a long, leisurely line … Cobo is sitting pretty in his red jersey, with a thumbs-up for the cameras. Sky have apparently said they won’t attack him today, but his squad will be taking absolutely no chances.

60kms to race in this year’s Vuelta and the first attack tiptoes gingerly off the front. The gaps start to open very quickly and the riders are scattered in ones, twos and threes all over the road. 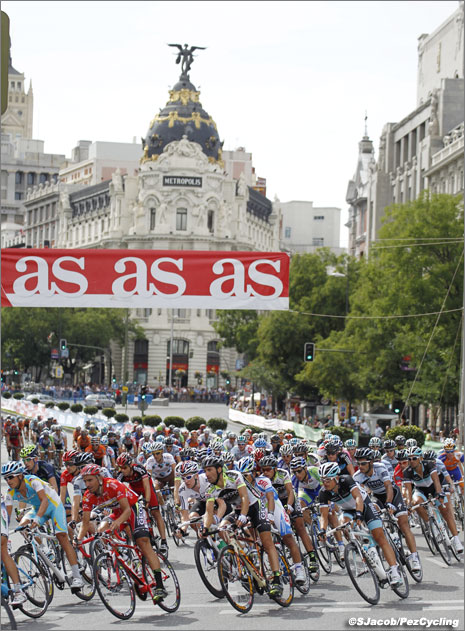 In fact it’s not so much a break as two or three mini pelotons belting along, with what looks like half a dozen Liquigas riders in the front one. The circuit looks to have some pretty tight corners

Benitez (Andalucia), Horrach (Katusha) and Damiano Caruso (Liquigas) have detached themselves off the front now and are flying.

45kms to go and things have settled down as the front trio make their fourth (of twelve) crossings of the finish line – the main peloton rolls through led by Lampre. 43 seconds is the gap. 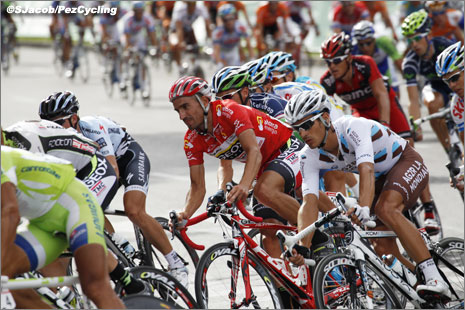 Every tight turn and the back end of the field grinds to a complete halt. The lead trio complete their fifth lap, 39.9 kms to go and they’ve still got 51 seconds in hand. The peloton is still flushed with fuschia colors as Lampre fancy the chances of Alessandro Petacchi.

Not a lot doing! The field is gradually winding it up and the gap is eroding, second by second.

Horrach, Caruso and Benitez start to switch across the road as the field closes in – Horrach jumps solo as his erstwhile companions run up the white flag.

Two laps to go – 10kms, give or take. Horrach knows the end is coming, but he’s done his job, keeping the break away going through the two intermediate sprints. So no chance for Mollema to outwit Rodriguez for the points jersey.

QuickStep and Leopard-Trek hit the front now, nine kilometres to run. Liquigas make a lime-green slash through the peloton – apparently, they have finished an entire nine-man team for the ninth Grand Tour in a row!

SaxoBank have Nick Nuyens up front, and there are a couple of Skil-Shimanos there as well. 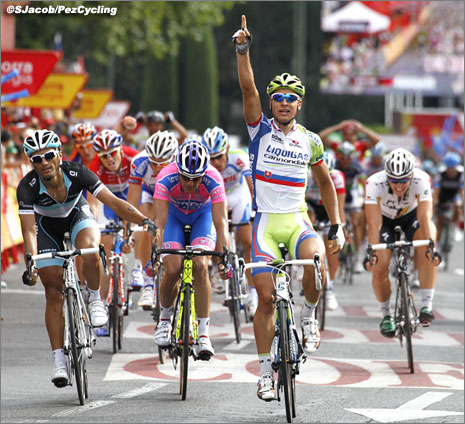 Ultima vuelta … the last lap of just over five kilometres. Now the familiar freckles of Stuart O’Grady takes it up. Three kilometres left and the field takes a 180 degree left-hander and the back of the peloton teeters to a virtual stop.

O’Grady is still battering along at 66kms/h as the field wheezes out into a long line.

Robert Wagner leads it under the red kite – no roundabout to confuse things unlike a few stages ago! Wagner swings off leaving Petacchi exposed. Skil-Shimano suddenly swwep through.

Petacchi now hits the front, and drifts right with Bennati there with him … but it’s Sagan who comes through like a missile and notches his third stage win in this Vuelta right on the line. 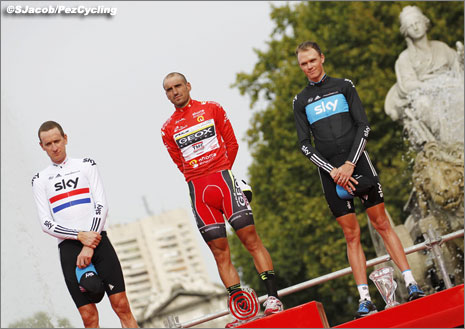 Behind Cobo is safely home to win the overall, and Bauke Mollema has sneaked into ninth on the day and nicks the points classification off Purito Rodriguez’s shoulders.

A cracking Vuelta with myriad twists and turns, right into the final meters. Thanks for following it with Pez! Stay tuned for tomorrow’s Eurotrash for the full fall-out!