Race report: The veteran Spaniard Pablo Lastras produced a fabulous ride today – not just with his legs but with his racing head as well. He got in the right breakaway, calculated that two of his companions would leave the chasing to Sylvain Chavanel, and launched a perfectly timed attack just 12kms from the line. Racing perfection. Here’s the story of the day …

El Berro, 48kms left – Chavanel is back at the team car for water and words of encouragement. The streets are picture-perfectly narrow and the QuickStep car squeaks through teeny gaps. Should be fun when the peloton gets here. 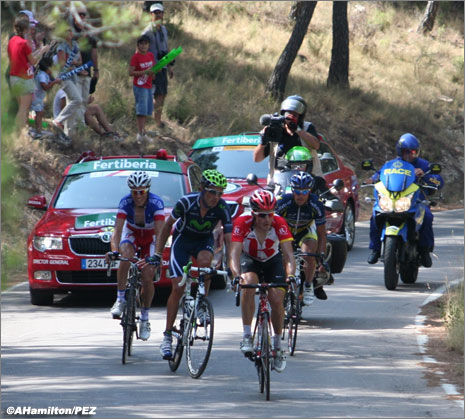 The high-powered break that managed to hold off the field…

Stuart O’Grady is tapping it out on the front of the peloton as race leader Daniele Bennati takes it easy ahead of the 3rd category Alto del Berro climb. Markel Irizar is over the top of the Alto del Berro in first; back down the road Cofidis’ Nicolas Edet is picked up by the Leopard-Trek express – rumour has it that the young Frenchman has come off worst in a rider v insect interface!

Mark Cavendish is already looking as if he’s in trouble as a gap has opened up to the field. If Goss was ill yesterday, maybe Cav has picked up the same bug? Leigh Howard has been assigned the task of looking after Cav and is busy setting the pace. For Skil-Shimano, it’s Albert Timmer doing the same job for Marcel Kittel. 35kms to go – the lead dips under four-and-a-half minutes, and it’s looking good for the break.

The momentum in the field takes a dent as Katusha’a Trofimov and Garmin-Cervelo leader Christophe Le Mevel thump onto the tarmac. Cavendish is back with Moto 3 and a phalanx of team mates to help him. They’re not alone – about twenty together.

Twenty-five clicks to go and Podgornyy in the break is rubbing his thigh muscles – a bit of cramp on another ferociously hot day? The break has a faux dash for the finish line as they go through the finishing circuit for the intermediate sprint. Chavanel takes the points and the time bonus.

Fifteen kilometres to go and the escapees are on the second and final climb of the day, working well. The Alto de la Santa tops out at 640 meters – not high, but steep enough. 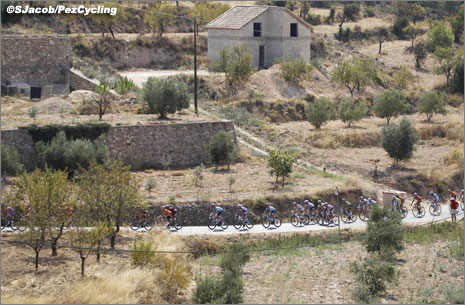 Can you say, hot?

Sky have Kurt-Asle Arvesen driving it along on the front, before Thomas Lцfkvist takes over with Bradley Wiggins tucked in behind. Chris Sutton, winner yesterday and in the green points jersey, is dropped. Stijn Devolder is all over the bike behind the peloton, looking as though an invisible giant is holding onto his seatpost. It’s neither pretty nor effective.

Might be Lastras who now jumps in the final few meters of the Alto de la Santa and sets off alone down towards Totona, taking the corners like a Superbike moto rider. The peloton cross the summit at 1’ 52”. The more important gap is that he’s pulled out 23” on the chasing trio – seven kilometres to go for Lastras.

Six kilometres to go and Lastras has 21”; he grabs a gel out of his back pocket and pelicans it down his gullet. He’s belting along at around 50kms/h, but the gap is coming down – 15” only. The Spaniard is totally committed, not rocking too much in the saddle, holding a good position. Chavanel is the main aggressor in the chase dragging Podgornyy and Irizar across the road.

Lastras is out of the saddle now, desperately hammering his legs around, looking a bit more ragged now. Irizar is on the front of the chase now, but doesn’t want to commit totally – the chase slows a little. Two kilometres left – back out to 12”!

The chasers have hauled up the white flag of surrender – they meander from side to side of the road. Racing suicide. Seventeen seconds now – Lastras surely safe as he flies over some road furniture. 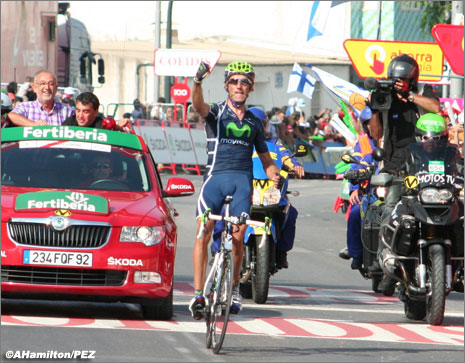 The veteran Spaniard unleashes a very emotional sequence of celebrations as he hits the line , for the memory of Xavi Tondo, to remember Mauricio Soler … a brilliantly taken win, and the added bonus of the overall leader’s jersey as well. Chavanel takes a frustrating second in the sprint. Irizar is fourth on the day but gets the mountains jersey for his efforts.

The main peloton comes in nearly two minutes down; the field is shredded and dribs and drabs of riders continue to roll home long after Lastras takes to the podium.

Tomorrow we’re off into the high mountains already … Sierra Nevada awaits. Until then, keep it Pez!