Today the Vuelta would give its first test to the climbers as the 170km stage started in Baza, and ended up the grueling Sierra Nevada climb, which climbed up over 2000 meters. This is the same climb that Cadel Evans had the world’s worst wheel change on in 2009, costing him the race. As if the heat wasn’t enough, eh?

The others sprinters must have breathed a sigh of relief as Mark Cavendish, suffering from heat exhaustion front the steamy Spanish roads, climbed off after the climb of the Puerto de los Blancares and before the Sierra Nevada.

At the foot of the Sierra Nevada, Rabobank and Liquigas had the most riders at the front of the group, setting a vicious pace that was quickly sending many riders out the back door, and burgeoning the “cola de carrera”. Only the 4th stage

The break wasn’t as cohesive either, as only 4 of the 7 were left together. Bagot and Toribio bade their farewells and slipped off the pace as the Sierra Nevada bit down on them. 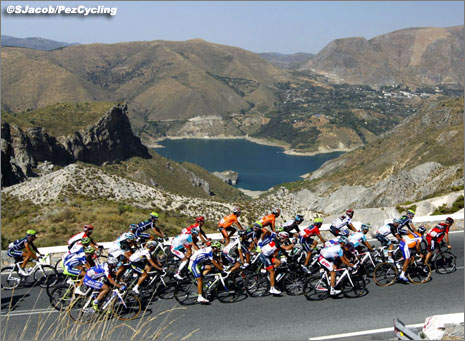 Katusha took over from Rabobank to continue the pressure up front, and while Radioshack’s young charge Busche was holding his on in the break the pace proved too much for Kloden, who exited the back of the main group. Race Leader Pablo Lastras also fell into difficulty, and left the front of the field with about 17km to go. The jersey would certainly change hands today.

The break held a dwindling advantage of just over two minutes at the 17km mark as well. By 14km, they’d lost another 10 seconds.

The main group behind chipped away, with Vacansoelil-DCM’s Santo Anza making the pace. The riders now numbered about 40ish, and the pace had grown for more manageable, as evidenced by riders going back to team cars to fetch bottles.

However, the pace might have been pecking at Euskatel’s Igor Anton, as he bounced dangerously along at the back of the main group, with teammates around him, delivering drinks and keeping an eye on their captain. This climb was long, and it went high, but it did hover at a manageable average gradient of 5.7%, but with this heat one can never tell how the body will react.

The heat didn’t seem to bother Saxo Bank Sungard’s Rafal Majka too much, as he shot out of the peloton in pursuit of the break. There was no chasing reaction from the field, just a little bit of looking around until Liquigas shut the move down. 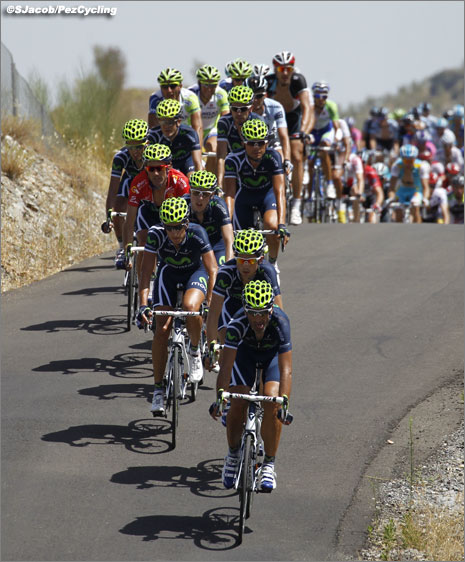 Sorenson made a dig, Kruiswijk countered that, but Nibali flexed and seemingly easily jumped away from the group. Seeing no help coming along, the Liquigas rider shut it down, saving the energy for later, leaving Sorenson just off the front.

The break was now down to 34 seconds, though the quartet was still rolling through and working together.

Some more shadow boxing behind, until Astana’s Robert Kiserlovski bridged over to Sorenson, who was still plying his earlier move with his trademark lurching on the bike. The pair made a little headway, and quickly caught up to the break, where Sorenson went right over the top of them. AG2R’s Bonnaford somehow found the extra energy to go with the Saxo Bank rider, forming the new two man break.

Liquigas kept the tempo even behind, Nibali surveiling his competition.

Sorenson drove the pace, and was clearly hurting Bonnaford who was doing all he could to just hold the wheel. Katusha’s Daniel Moreno launched out of the main group in a bridge attempt to the break, which he completed with a hard effort. As Moreno made contact, Bonnaford lost it. 3 km to go, with just 12 seconds in hand, Sorenson kept the pace as high as he could. Moreno came through to help, and the pair held still just about a dozen seconds under the 2km to go banner. 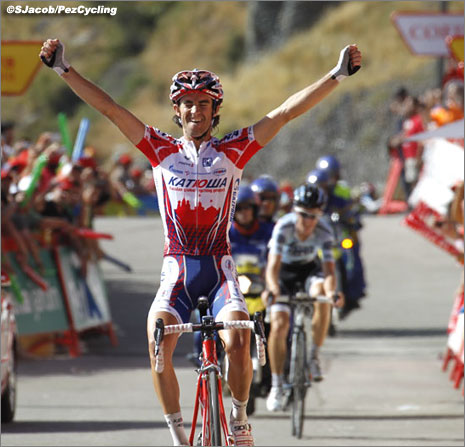 Moreno dangled a bit, but got back on Sorenson’s wheel. Behind, Team Sky went to work on the front, trying to shut the break down. With 1 to go, Sorenson was still driving the pace, Moreno tucked on and not willing – or perhaps not able – to assist. It turned out to be a game of possum though, as Moreno shot out from behind the wheel and sprinted away from Sorenson, taking the stage win – his first ever in a grand tour.

The field came in mere seconds behind the duo. But poor Igor Anton had the worst day, completely shattering and losing a minute and a half. A big blow to one of the favorites for sure.

4 days and 4 different leaders, as the Red Jersey would be worn by Sylvain Chavanel, who enjoys a 40 second advantage.