No rest for the weary for the Vuelta contenders. Yesterday was the first important date with destiny, and today, the second. While nowhere near as long as the climb to Sierra Nevada, the climb to Valdepeсas de Jaйn makes up for in wicked steepness – can you say 24%? Read on!

Following the first mountaintop finish of this year’s Vuelta in yesterday’s fourth stage, the peloton was in no mood for a piano session to start the day. 45 kilometers were covered in the first hour, and due to the speed, a constantly fragmenting and reforming break led the way.

With such a high powered break off the front, the peloton couldn’t afford to let off the gas too much. As a result, the gap never grew too much either. With approximately a metric century remaining, Michael Albasini attacked his erstwhile companions in hopes of wresting a smaller, better working group clear. 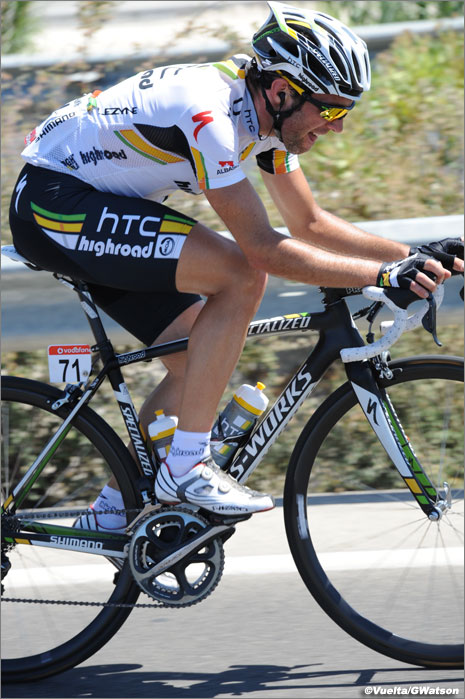 Instead, he got a whole lot of solo time. The Swiss rider jumped, and no one followed. Albasini’s move spelled the end for the rest of the seven, as Sylvain Chavanel’s QuickStep team gobbled up the remaining (seven) dwarfs.

Well, Madrazo and Frцhlinger didn’t quite get gobbled. They defied Chavanel’s blue and white army for a time, but it was all in vain.

There was nothing doing against the combined forces of QuickStep and Joaquim Rodriguez’s Katusha team though. Rodriguez was always a hot favorite for this stage, and considering the effort put forth by Katusha on the front – he was on a good day. 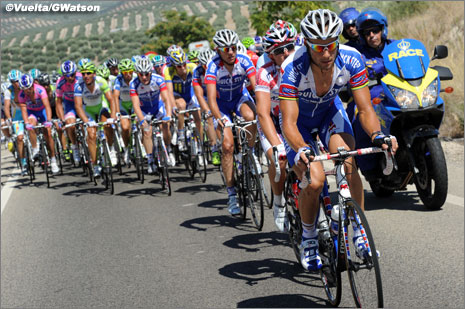 Tom Boonen formed part of the QuickStep machine on the front of the field today.

Now, can we get to the business end?

With 20 kilometers to go, it’s all together with Katusha driving hard to the finishing climb to Valdepeсas de Jaйn. The continual hard pace saw the group steadily lose weight out the back. By the time the climb was set to begin, only 40-50 riders remained.

The two part final climb opened the door for some attacking. Astana’s Alexsandr Dyachenko was the first to try his luck with 4k to go until the intermediate summit. He got a moment in the sun, but the clouds arrived with multi-time KOM winner at the Vuelta, David Moncoutie. The Frenchman, who apparently loves the mountains of Spain, bridged across to the Astana rider and immediately left him gasping.

Could Moncoutie make it to the finish?

The veteran added second after second to the field. With 4k to go, Moncoutie crosses the first summit, out of the saddle, giving it everything.

34 seconds behind, Liquigas is at the head of affairs, looking solidly in control.

Moncoutie gets low and tucked over the next kilometer, then resumes pedaling with 3k to go. The peloton makes up a whopping two seconds over that kilometer.

It’s fast through this part, but Moncoutie still looks strong, with jersey unzipped, in the drops, out of the saddle.

2k to go: Moncoutie inspects his legs, willing out a few more watts as a Katusha rider takes over on the front in the peloton behind.

Things are looking ragged in the ever dwindling front group, but the Katusha rider on front isn’t looking all that great either. Behind him, Liquigas is still lined up, ready to deliver Nibali in the best manner possible.

Up ahead, Moncoutie soldiers on. Gone are the days of smooth power. He’s looking for something, anywhere, but there’s nada. 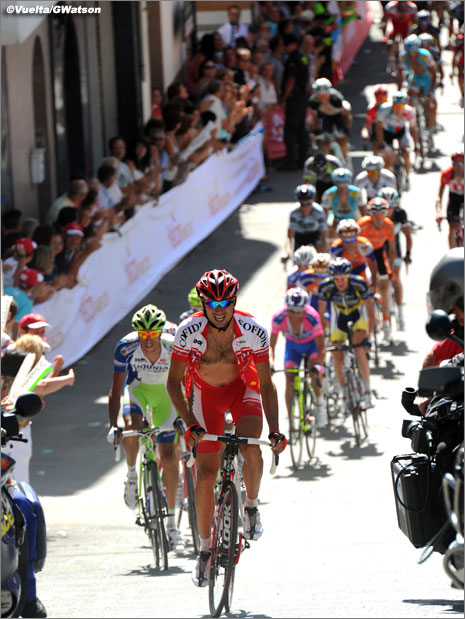 Moncoutie’s move in its death throes. Here comes the steepness!

The camera flashes to a struggling Igor Anton at the back of the group. He’ll have nary a chance when the race kicks up big time in the final kilometer.

One kilometer to go! Moncoutie passes the banner and immediately gets out of his saddle. There’s no way he has enough – the gap is down to 16 seconds, and the gradient is kicking far higher than that. The 23-24% section looms ahead for the lover of all climbs Spanish. Unfortunately, this won’t be one of the Frenchman’s conquests.

Right as the gradient hits 24, Moncoutie is caught, Anton is dropped definitively, and up ahead, Moreno, Rodriguez, Nibali, and Poels are killing it. 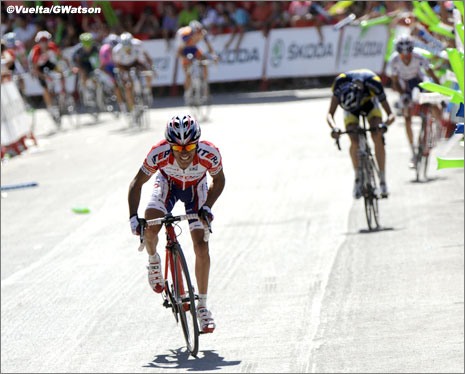 Rodriguez managed to pull well clear of everyone.

Yesterday’s stage winner, Daniel Moreno, is pacing his teammate and leader, Joaquim Rodriguez over the vertiginous section…but not for long.

Rodriguez attacks by his teammate, leaving Moreno and Poels behind. Rodriguez is flying, putting ever more meters into the two chasers with everyone else just behind groping for everything they could manage from their legs as the gradient neared vertical.

Rodriguez is devouring the urban hill climb course, sprinting up the final slopes, and he takes it on the line by a couple ticks over Poels, with Moreno following right behind in 3rd – a great day for Katusha, and yet another great ride by the young Dutchman Wout Poels. 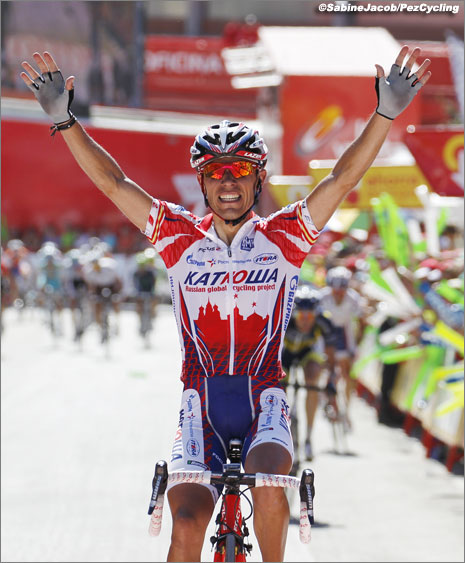 Bauke Mollema managed fourth right behind Poels to ensure that Poels doesn’t get all the young Dutch hype. The two countryman are putting on a great show so far in this Vuelta.

Whew. A thrilling final kilometer and a worthy second year in a row addition to the Vuelta.