Another hot day on La Vuelta a Espaсa and Liquigas was on fire with four riders (and Lastras) in the break that fought out the finishing sprint with Pablo Lastras trying to up-stage them. Nibali and Sagan were there to make sure the win went to one of the gasmen, it was close, but Sagan came good!

Today’s stage of 193,4 kilometres from Ъbeda to Cуrdoba is a bit lumpy until it gets to the finishing circuit with 30 kilometres to go and they hit the 2nd Cat Alto del Catorce por Ciento which climbs just over 400 meters in 8 kilometres and then drops down into Cуrdoba for a tricky finish with roundabouts and a sharp left hand bend before the line on Avenida de al-Nasir.

The Early Action
A 20 man break had a 30 second gap by the 33 kilometre mark, but at the town of Mengibar after 43 kilometres the peloton was all together again, not surprisingly as Chavanel and Rodriguez were amongst the group. The bad news filtered through that Rabobank’s Matti Breschel crashed during the neutralised section and had to abandon with a deep facial wound and other abrasions and he would need X-Ray’s to confirm that there are no broken bones. Nicolas Vogondy (Cofidis) also abandoned. 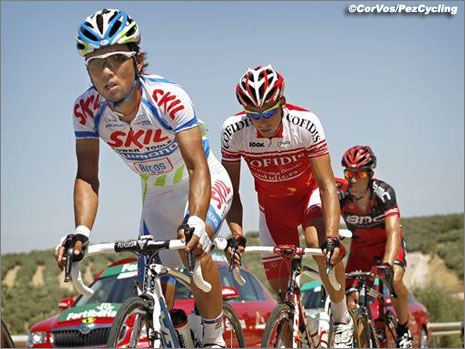 With 110 kilometres to the finish in Cуrdoba the lead had reached 6 minutes and 15 seconds for the four riders. They built this up to over 8 minutes by the feed station with 95 kilometres left. Liquigas-Cannondale started to help Quick-Step which brought the lead down to 6 minutes as the race entered the Province of Cуrdoba with 82 K’s to go. The gap continued to come down slowly as Leopard-Trek, Ag2r and Garmin-Cervelo also put men to the front.

Through the first intermediate sprint in Villafranca de Cуrdoba (139K), Saramotins was first ahead of Kohler and Doi, the lead was down to 4 minutes and 50 seconds. Fabian Cancellara, meanwhile was stretching the peloton into one long line. Kurt-Alse Arvesen (Sky) abandoned at this point suffering from the crash when he hit a child yesterday; Johann Tschopp (BMC) joined him.

Cancelarra pulled a long time on the front bringing the gap down from 4 to 2 minutes in around 10 kilometres. Kohler attacked as the leaders came to the finish line for the first time with the 30 kilometres loop to go, he had 59 seconds on peloton, but this was the last bit of hope from the leaders.

Doi and Saromatins were caught first, then Palomares was reeled in and as the race started the climb of the Alto Catorce por Ciento, the Leopard (O’Grady) led bunch caught the brave Kohler with around 25 kilometres to race. At the back Euskaltel’s Igor Anton was in trouble again. 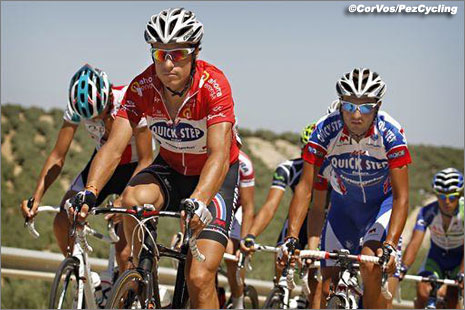 Sylvain Chavanel had a pretty nice day in the leader’s jersey…that is, until the finale arrived, then things got a bit hectic. The French champion held on though and continues into Stage 7 with the lead.

At the front Nico Roche and the race leader; Chavanel were watching the Leopard train closely in 4th and 5th positions. Wiggins and Nibali had both moved forward thinking of the overall, but there was no Katusha jersey visible…yet!

An attack form David Moncoutie (Cofidis) came within 2 kilometres of the summit, this will be for KOM points towards his hoped for 4th mountains prize. Tony Martin (HTC) set off after the Frenchman, but there was only 10 seconds between them and the bunch.

On the descent Kevin Seeldrayers (Quick-Step) and David De La Fuente (Goex) caught Martin and Moncoutie, they soon had a gap of 10 seconds on what was left of the bunch and with 15 kilometres to Cуrdoba they had 25 seconds in hand. 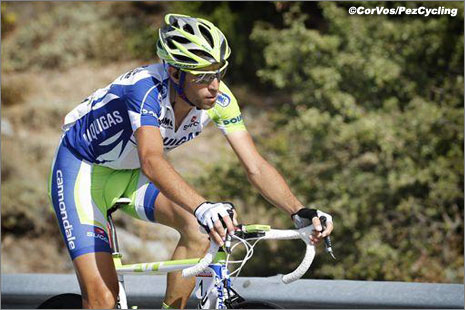 Liquigas were in a great position coming into the finish, scratch that – an amazing position, but they weren’t able to capitalize terribly well to get Nibali some more bonus ticks to go along with the time gains.

Tony Martin looked to be very interested in the win today, pushing very hard, behind; Liquigas and Leopard were doing the hard work of the chase.

The Last 10 Kilometres
Pablo Lastras (Movistar) attacked off the front to bridge to the four up front, Liquigas had Sagan doing chase work, and this brought the leaders back with 8 kilometres to go. Chavanel, Nibali and Rodriguez were all in the front.

5 kilometres to go in stage 6 and the bunch had split into many groups on the descent. Four Liquigas riders (Nibali, Sagan, Agnoli & Capecchi) were away with Lastaras, then a chasing group with the Red jersey; Chavanel, Martin and Rodriguez. 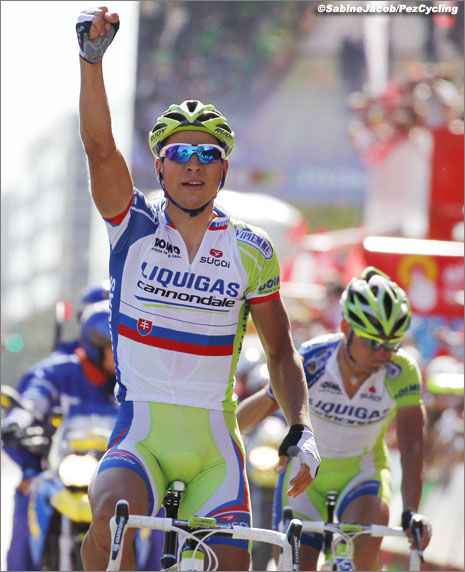 As expected, Peter Sagan notched up his first career Grand Tour stage win at the Vuelta…how many more will he get over the next 10-15 years?

Under the 1 K banner and the Liquigas riders were working over Lastaras, he tried his best, but Peter Sagan was lead out by Nibali and won the sprint from Lastras. It looked like the win was for Nibali, but Lastras was moving faster than the Italian, so it was down to Sagan to make sure the team won the stage.

The next group with Chavanel lost 17 seconds and of course the bonus seconds, Chavanel will keep the Red jersey, Rodriguez was in the same group, Wiggins lost a little time, but Nibali has moved up to third overall.